Built to race, it picks up where the MC12 left off

No longer embedded in the gap separating Alfa Romeo and Ferrari, Maserati is preparing to give its range of models an overhaul that's so comprehensive it merits its own chapter in the firm's history. The first car in this installment isn't a volume-generating crossover or a politically correct electric car (though, fear not, both are coming soon). It's a mid-engined, 621-horsepower coupe designed with an unabashed focus on performance. Called MC20, it will join a segment dominated by Lamborghini, McLaren, and former sister company Ferrari.

Maserati explained developing the MC20 took about two years thanks in part to software-based simulation testing that saves the firm a significant amount of time and money. 97% of dynamic tests were performed using simulator designed in-house, and engineers then fine-tuned the car by testing it in real-world road and track conditions around the world. Lap times were extremely important, because the MC20 was built to race.

We'll need to wait to find out where it will compete, and what it will look like in full racing regalia. Maserati has only unveiled the street-legal variant, which wears a low-mounted oval grille, swept-back headlights, and triangle-shaped rear lights. All of the brand's defining characteristics are accounted for, and stylists intentionally weaved a handful of subtle references to the MC12 built in 2004 and 2005 into the design. Viewed from the side, it wears the typical proportions we expect from a mid-engined supercar. It upholds Italy's well-earned reputation for creating poster-worthy supercars that blur the line between transportation and art Da Vinci would be proud of.

Maserati chose not to give the MC20 active aerodynamic components, though the coupe depends on a small, neatly integrated rear spoiler for downforce, and it relied extensively on carbon fiber to keep weight in check. It also installed butterfly doors, but they're more functional than their made-for-Instagram flair suggests. They help the occupants enter the cabin in a relatively graceful manner, even if they don't regularly do yoga.

Eyebrow-raising horsepower is no longer enough to sell a car in 2020; even mid-engined coupe buyers want tech. Maserati took that into account, and it ensured the MC20 is permanently connected via a suite it calls Maserati Connect. It includes internet-connected navigation, on-board Wi-Fi, Amazon Alexa compatibility, and smartphone connectivity. Inside, the driver faces a pair of 10.0-inch screens; one replaces the instrument cluster, and the other displays a new infotainment software named Maserati Multimedia System, which is somewhat unfortunately abbreviated to MIA in the company's official communication. It allows users to select a driving mode, set the temperature, turn on the heated seat, and change the radio station, among numerous other functions, ensuring the cluster of buttons normally found on the center stack are MIA. 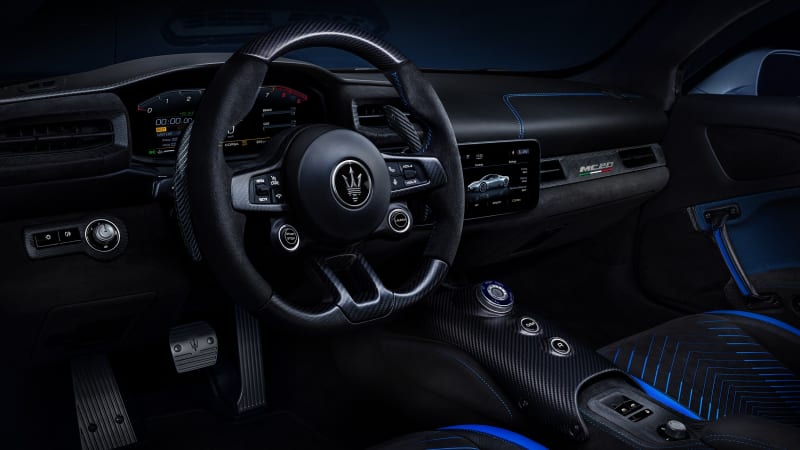 While the MC20 is certainly not a stripped-out, track rat of a car, it conceals its technology remarkably well. Its interior is refreshingly simple and driver-oriented, and every component has a purpose. It wears leather, Alcantara and bare carbon fiber in Maserati's press images, but other configurations will be available.

As we've previously reported, power for the MC20 comes from a mid-mounted, 3.0-liter V6 engine that relies on a pair of turbochargers to develop 621 horsepower at 7,500 rpm and 538 pound-feet of torque between 3,000 and 5,500 rpm. Engineered in-house, and called Nettuno in Maserati-speak, the six-cylinder is a 90-degree unit with two spark plugs per cylinder, a dry sump, plus both direct and indirect fuel injection systems. It spins the rear wheels via an eight-speed, dual-clutch automatic transmission and a mechanical limited-slip differential.

Maserati quotes a 2.9-second sprint from zero to 62 mph. Keep the pedal down, and you'll reach 120 mph in 8.8 seconds before topping out at approximately 202 mph. Alternatively, mashing the brake pedal brings the MC20 to a full stop from 96 mph in 108 feet, a time achieved thanks in part to six-piston Brembo front calipers.

Enthusiasts who want to put one of the first MC20s built in their garage can already place an order, though pricing information has not been revealed yet. Production will start in the same Modena, Italy, plant that built the GranTurismo and the GranCabrio before the end of 2020. Autoblog learned from a Maserati representative that the MC20 will arrive in time for the 2022 model year, meaning deliveries will likely start in the first half of 2021.

Maserati has big plans for the MC20, but don't take our word for it.

"We designed it to enable coupe and convertible versions, and for full electric power," the company wrote.

Speculation about future variants rarely gets as clear and official as this. Looking ahead, the coupe will be joined by a convertible, and the V6-powered model will be sold alongside an electric car. Maserati has repeatedly hinted it plans to enter the MC20 in motorsport events in the not-too-distant future, so we'd say it's safe to bet a quicker, lighter version that's either strongly inspired by or directly derived from the race car will appear, too.