As usual, the headlights are to blame

The 2021 Kia Seltos missed out on an Insurance Institute for Highway Safety (IIHS) Top Safety Pick award due to under-performing headlights, the organization announced Thursday. Kia's new baby SUV aced the safety watchdog's crash safety and collision avoidance tests, but none of its available trims had headlights capable of scoring at least an "Acceptable" rating in IIHS testing.

IIHS updated its testing regimen for the 2021 model year, further emphasizing the performance of exterior lighting and pedestrian safety systems. Previously, a vehicle could receive a Top Safety Pick Plus rating so long as it at least had optional headlights that performed well; this year, vehicles must have headlights rated at least "Acceptable" on all trim levels to qualify for the highest ratings. The lesser Top Safety Pick designation is more lenient, but Kia's new entry falls short of even those requirements.

Kia offers three different headlight configurations on the Seltos — two halogen and one LED — and all three were rated "Poor" due to inadequate illumination in curves, says IIHS. Its other equipment, including its optional collision mitigation systems, all received high marks.

The base-model LX comes standard with all-wheel drive, but is woefully devoid of advanced safety features, coming with only a rear seat occupancy reminder and government-mandated tech such as a rearview camera and lots of airbags. Above the LX, the Seltos gets standard forward collision warning with pedestrian detection and automatic emergency braking, lane-departure warning and lane-keeping assistance, a driver inattention warning system and automatic high beams. 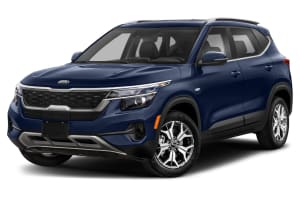 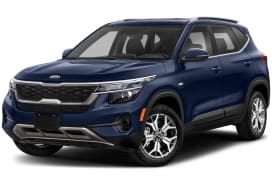 2022 Cadillac Lyriq launch is running ahead of schedule