Jaguar reins in its two-door sports car, but it still offers the same, childish fun as before

The 2021 Jaguar F-Type is not a perfect car. There are some cracks in the armor, flaws worth pointing out and nits to pick for car reviewers like us. It’s not a Jaguar version of the unflappable Porsche 911, nor is it a British muscle car. The F-Type has split the difference since the car’s introduction for 2014, and now the two-seater’s first big update is upon us.

Ian Callum left Jaguar more than a year ago, but he was still responsible for this revamped design. Few cars featured better styling than the previous F-Type, and the same can be said this time around. Part of that can be attributed to Jaguar’s light touch approach.

Horizontal headlights and a new grille differentiate the new F-Type’s face from the last one. The clamshell hood remains, but its sculpting is less prominent and pointy than before. Combined, these new elements result in a softer, gentler face — Jaguar calls it “liquid metal.” At the back, new, I-Pace-inspired LED taillights now sit flush with the massaged bumper.

It’s still an obvious sports car design, but Jaguar has thrown away the edgy, aggressive persona of the previous F-Type. Forced to pick sides, we’ll take the previous generation – updating a brilliant design is no easy task – but it remains a beautiful car. Onlookers certainly agreed, as our Sorrento Yellow tester drew a colossal amount of attention. One can thank Jaguar’s ear-shattering exhaust for some of that attention, too.

How much shattering occurs depends on the engine, of course, and the number of pipes poking out of the bumper. Besides the sound, this is also the best way to tell different F-Types apart. Four-cylinder models get a single, central exhaust; V6-equipped cars get a dual central exhaust, and the V8-powered F-Type R continues on with its quad exhaust pushed out to the edges of the rear valance.

That's the version we drove. Powered by the same 5.0-liter supercharged V8 previously found in the F-Type SVR, the 2021 F-Type R produces 575 horsepower and 516 pound-feet of torque, an increase of 24 and 14, respectively. It's then a massive drop to the two engines below, which says more about the R than the unchanged but still amply endowed other F-Types.

The base P300 (gray car in the gallery above) is equipped with a 2.0-liter turbocharged four-cylinder that makes 296 hp and 295 lb-ft of torque, while the R-Dynamic P380 and its 3.0-liter supercharged V6 produces 380 hp and 339 lb-ft of torque. All are only available with an eight-speed automatic transmission — Jaguar nixed the three-pedal F-Type for the 2020 model year. However, Jaguar did re-tune the ZF eight-speed this year, inspired by learnings from the XE Project 8. Rear-wheel drive is standard on the four-cylinder, but both the V6 and V8 are all-wheel-drive only. Those lucky enough to drive the original F-Type R before it went AWD will lament this fact, but trust us when we say the V8 gets sideways enough on its own with all-wheel drive.

Jaguar has touched up the interior with a lighter brush, a testament to a design that has held up well with age. The pistol grip shifter, the toggle switches, the huge passenger grab handle and automatically rising air vents all remain. No complaints here. The technology was updated, however, including a 12-inch digital instrument cluster paired with updated infotainment software running on the car’s 10-inch touchscreen. 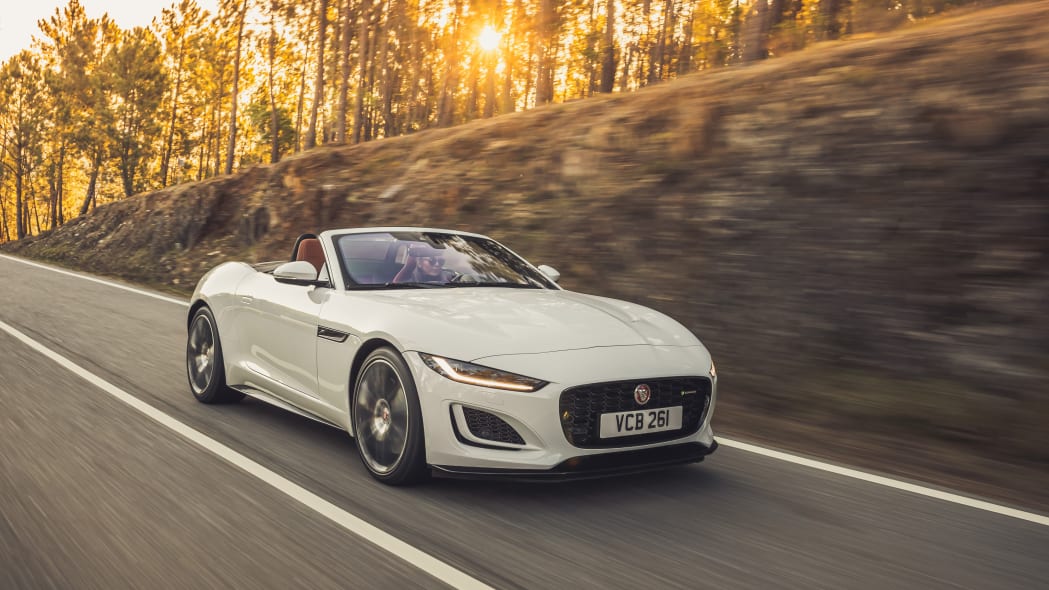 Being behind the wheel of the V8-powered F-Type R also remains an absolute hoot. You sit low in the cockpit, looking out over the long hood — we couldn’t see the end of it without raising the seat up a smidge. The round steering wheel is large for a sports car, and while the leather is supple and grippy, it was tough to find a position where our hands were comfortable and our fingers could reach the clicky metal paddle shifters. Two seats types are available on F-Type models, but the more aggressive “Performance” seats come standard on the R. They’re plenty bolstered, but wide enough to not be restricting on longer journeys.

The supercharged V8 fires up with a loud snarl, but a new Quiet Start mode can tone it down by closing the valves in the exhaust at startup. Your next-door neighbors will appreciate this feature, as the F-Type R is one of the loudest vehicles with a factory exhaust we’ve ever tested. The engine and exhaust dominate the experience of the car from start to finish. Volume levels range from extremely loud to how the hell is this legal?

Jaguar claims 60 mph comes in just 3.5 seconds, so acceleration within the speed limits is short-lived. This engine’s nature, the way it makes power, is the most alluring part of the acceleration. You don’t have to wait that split second for a couple turbos to spin up. The power is simply here, and there’s zero disconnect between your right foot and the Jag bounding forward. Don’t shift before max horsepower comes on at 6,500 rpm, either, as the feeling of forward thrust just gets stronger the more you wind it out. The immediacy of this powertrain’s response and the savage noises exiting out those four pipes make the F-Type R one of the best right-pedal-stomping experiences in the world.

Asking the F-Type R to change directions is a slightly different story. The vast majority of the changes that went into this refreshed F-Type were meant to enhance handling and driver engagement. However, the V8-equipped F-Type is still more of a brute than it is a pure-bred sports car. To use a couple other cars we know well as a metaphor: It’s more Mustang GT than Porsche 911 when the road turns curvy. Don't read that as writing the Jag off, though. Just because the F-Type isn’t a buttoned-down precision instrument, doesn’t mean it’s not an absolute treat to swing around.

The re-tuned shocks are best left in their softer setting on anything other than perfectly smooth roads. When set to “Dynamic,” it gets jittery over bumps. Add a heavy 3,843-pound curb weight and some suspect brake feel (on the softer side of pedals) from the two-piston fronts and single-piston rears to the equation, and the F-Type R is a handful to drive fast. We wish the carbon ceramic upgrade available in Europe were available here. The upgrade is massive, as you gain larger carbon ceramic rotors, along with six-piston front and four-piston rear calipers. 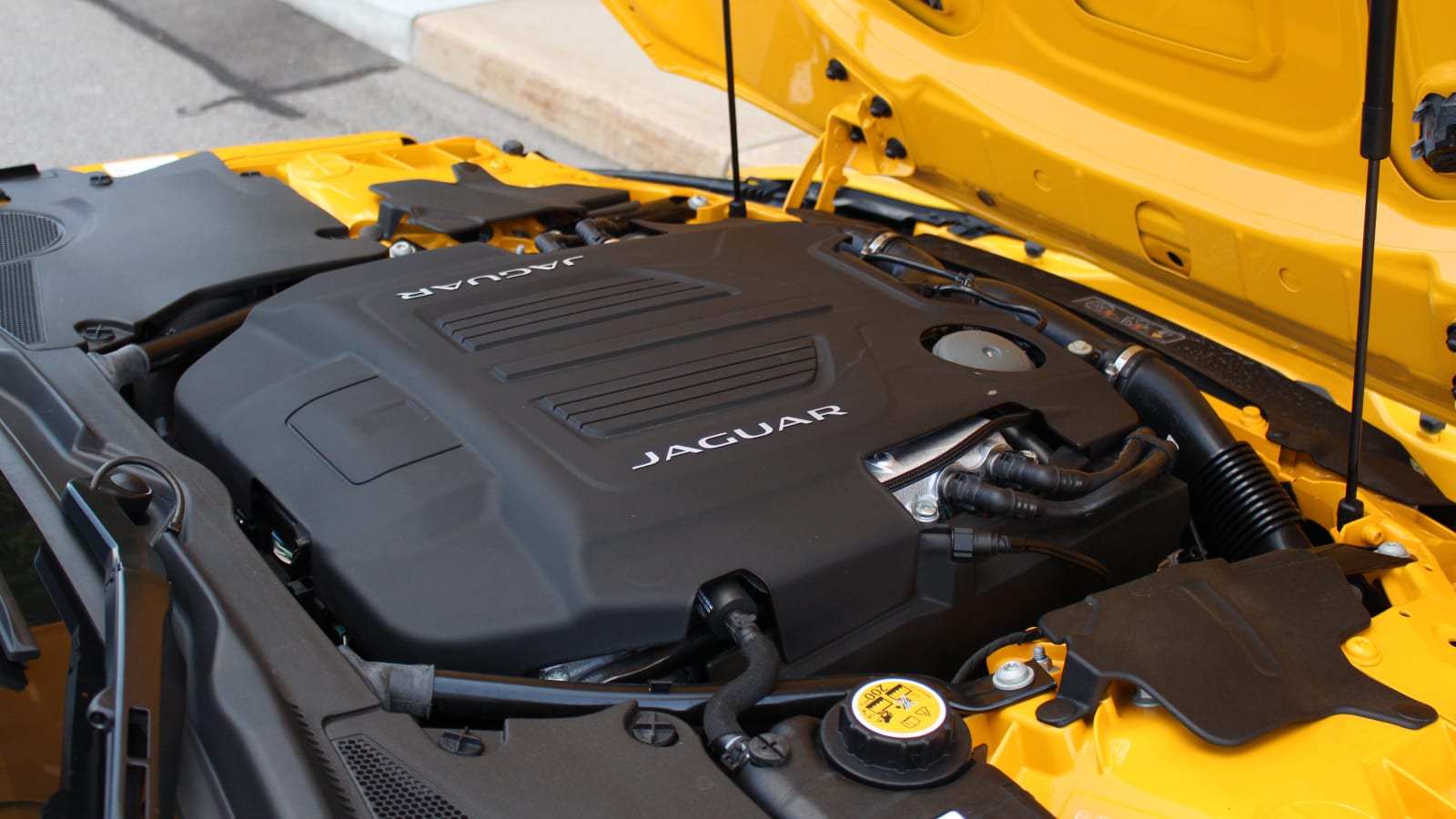 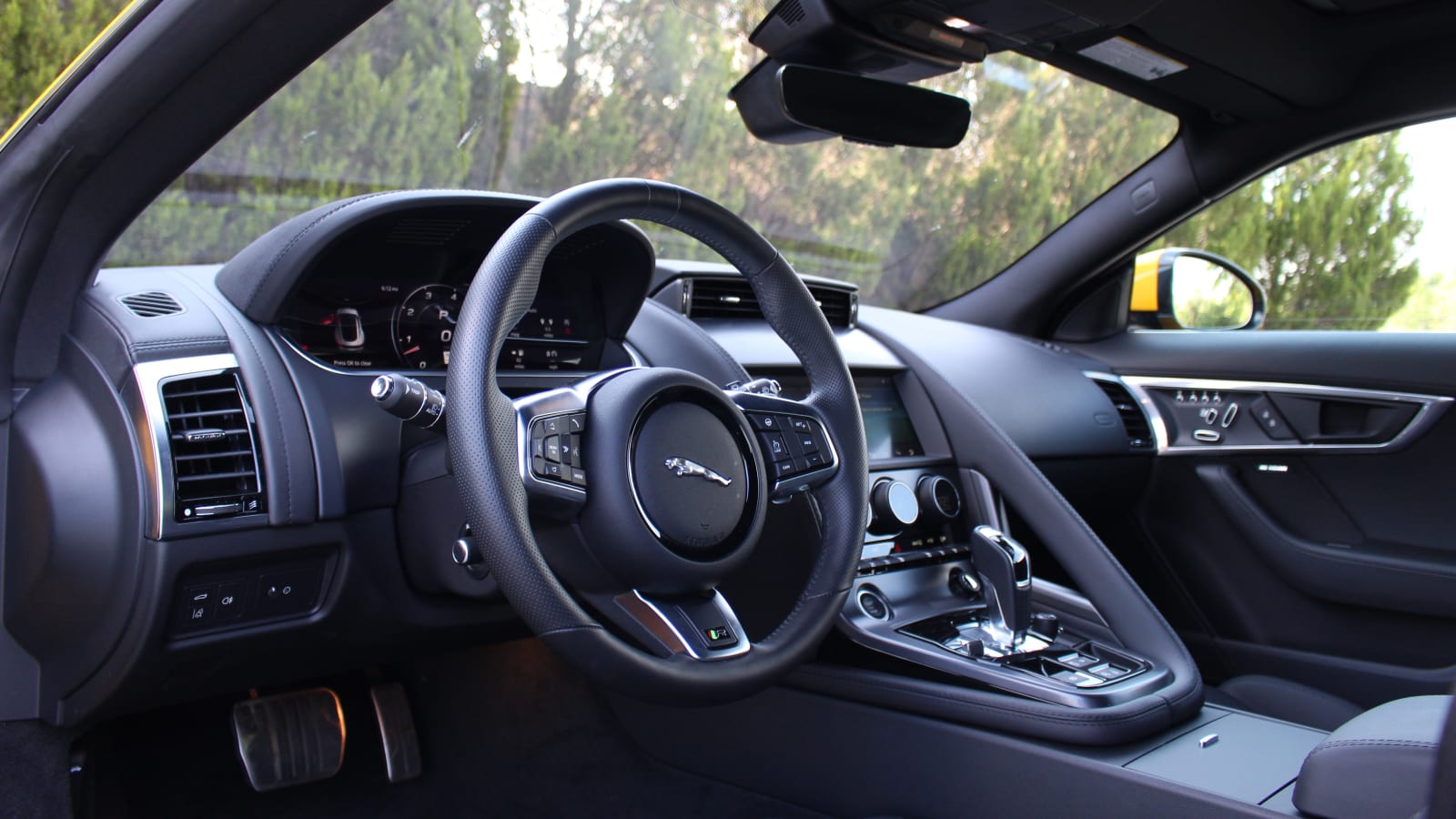 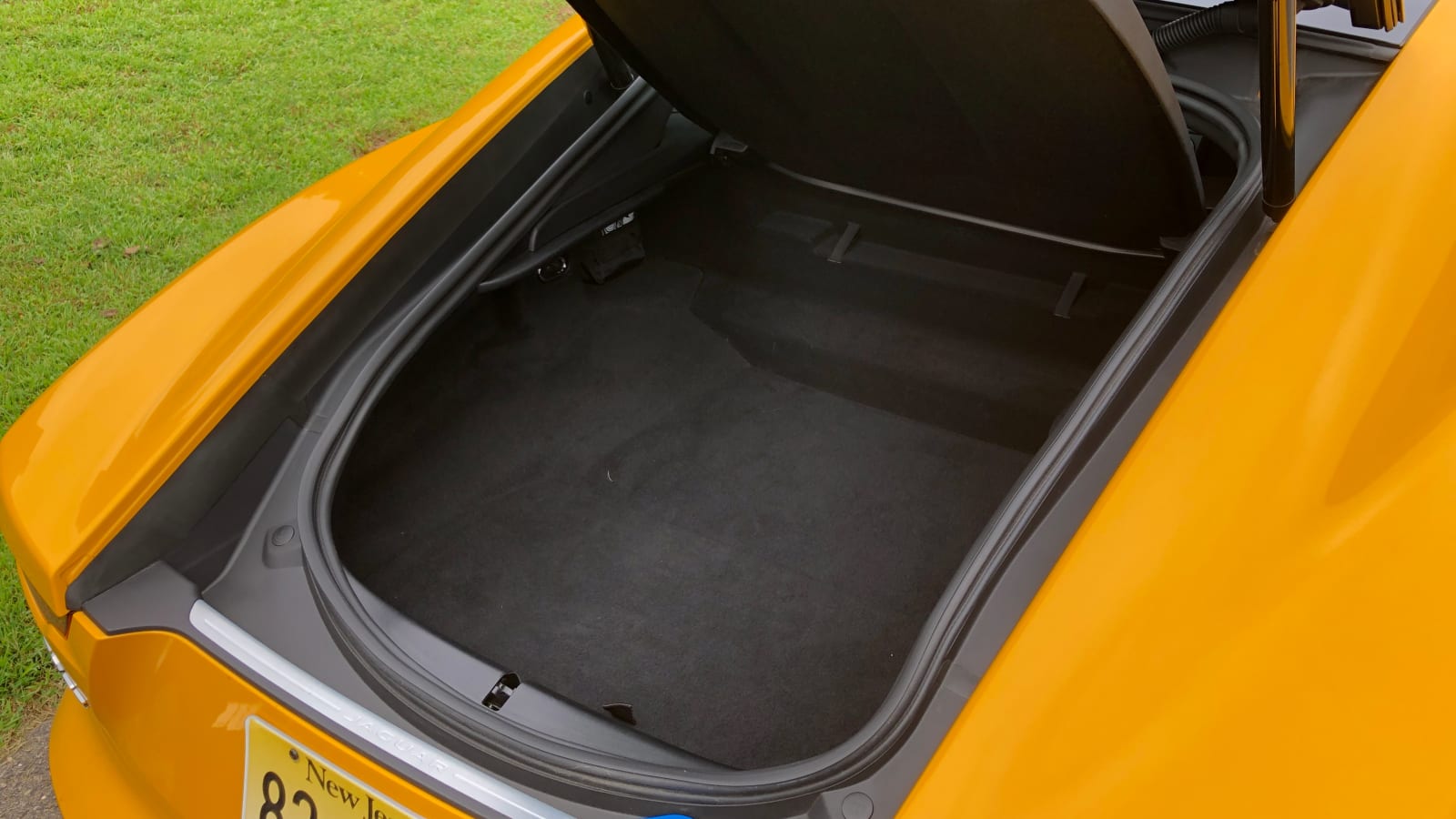 Once acclimated to the twitchy and ravenous fashion in which the F-Type R does its business, you start to get it. This car has a huge amount of raw, mechanical grip. You simply have to trust it, because it’s not going to coddle the driver. Dip too far into the touchy throttle in a corner with traction control off, and the rear end steps out. It’s tough to discern what’s going on feel-wise with those front tires through the steering wheel, and the constricted view forward can make driving fast even more disconcerting at first. We fell into a rhythm eventually, as the F-Type leans, pitches and rises in a consistent fashion. It’s a proper handling car, but it has the potential to bite the uninitiated who don’t give the 575-horsepower V8 the respect it deserves.

As a grand tourer, it excels with a forgiving ride, acceptable level of luggage capacity, and a vast array of luxury options. One glaring omission is the lack of adaptive cruise control. Jaguar has integrated lane-keeping assist, auto emergency braking and more, but adaptive cruise isn’t even an option.

We still haven’t had the chance to try out the less powerful versions of the updated F-Type, and there will likely be a new SVR boasting something even more powerful than the V8 pilfered by the 2021 F-Type R. Thankfully, all of them look like works of art, and if history is any indication, the supercharged V6 will remain a riot to drive. As for pricing, the F-Type R sits at the top with a $104,225 base price. The V6 cuts that to $82,825, and the four-cylinder sits at $62,625.

Jaguar specifies Porsche's 911 and 718s, the Chevrolet Corvette, Aston Martin Vantage and Mercedes-AMG GT as its key competition. In a game of engines and noise, the F-Type R is unmatched. The madness screaming from those four chrome tips is special and worth buying the car for. That’s just as it was before the redesign. Jaguar’s more grown-up handling helps this aging car keep up with the herd, but it’s still the wild one of the group. What the F-Type boils down to is an unrelentingly quick, absurdly loud two-seater with looks that kill. That’s exactly what a Jaguar sports coupe should be. 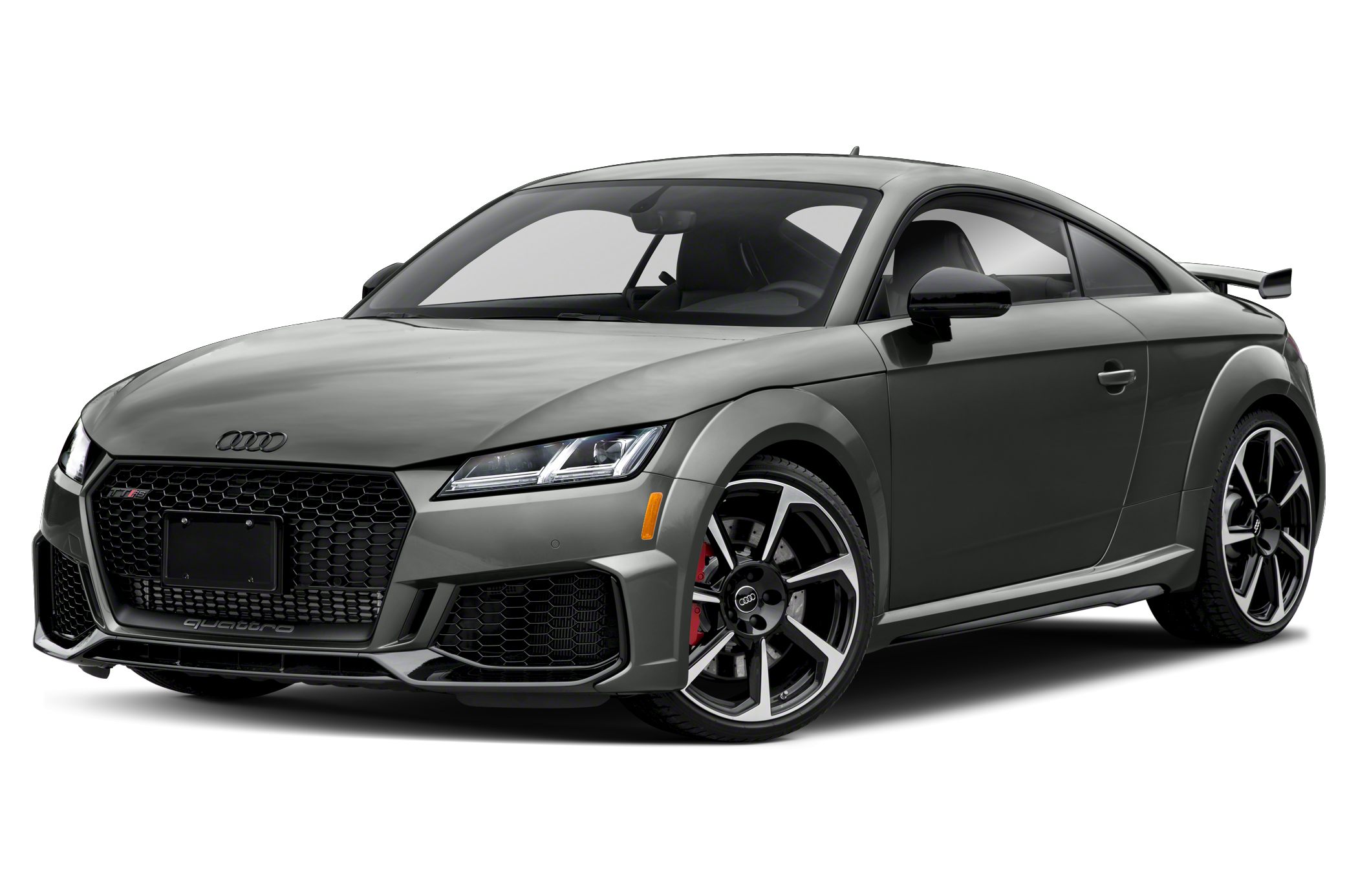 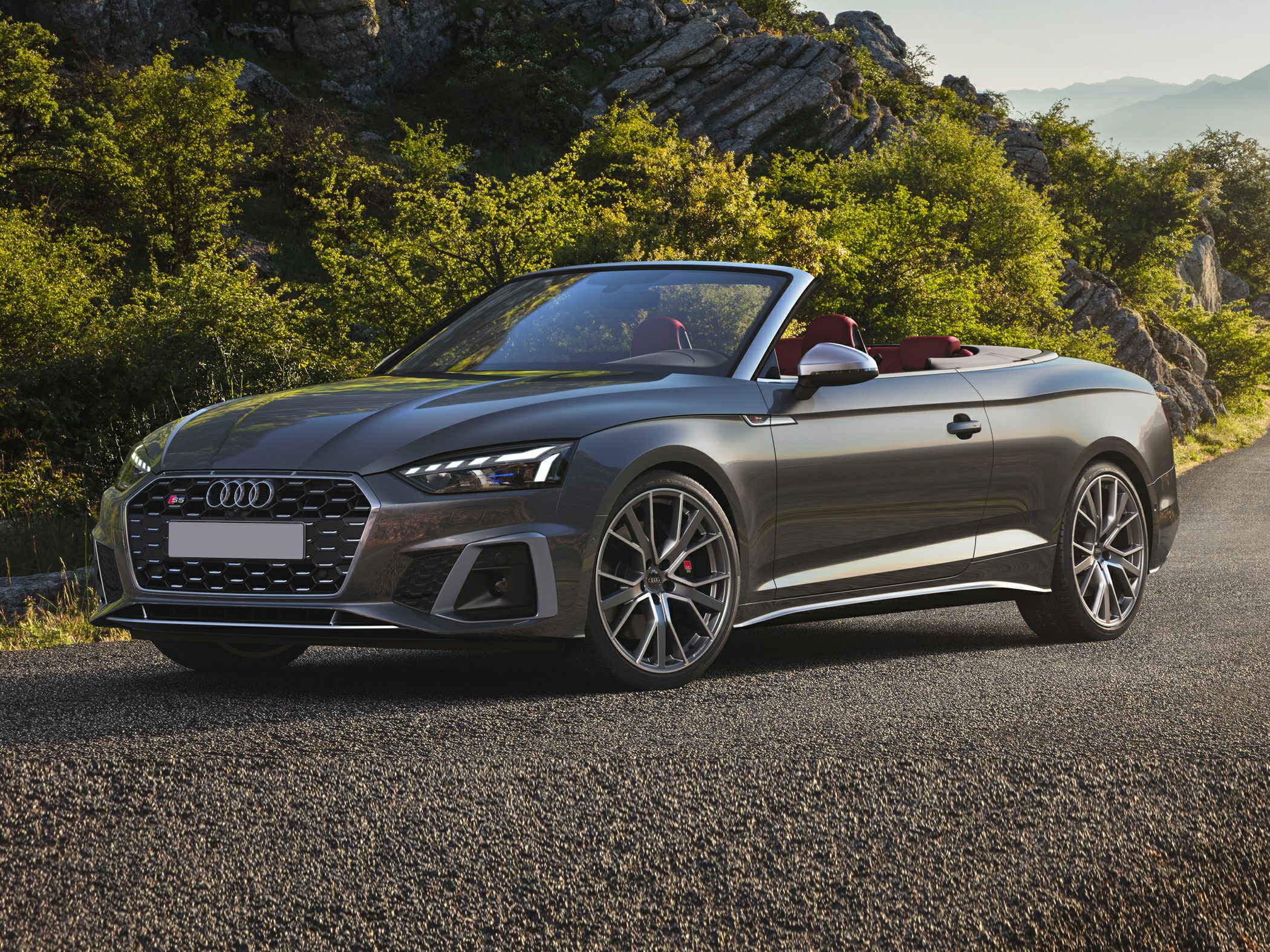 $2,402 - $5,019 Nat'l avg. savings off MSRP
See Local Pricing
I'm not in the market for a vehicle at this time. Please move this suggestion to the side for 30 days.
Huge Savings