The Tahoe is a real contender as the best big SUV

The 2021 Chevrolet Tahoe is the first full redesign of Chevy’s full-size SUV since the 2015 model year, and it’s a major one. It has a completely new independent rear suspension, a larger body, a new diesel engine option and many new features. The major overhaul is a bid to stay competitive against its archrival, the Ford Expedition, which received its own full redesign a couple years ago. To see how the changes have affected Chevy’s big SUV, we spent some time in a pre-production Z71 example and found it to be a well-packaged SUV with a greatly improved interior, but the driving experience is a bit of a mixed-bag.

The Tahoe has a few different engine and suspension options available. The standard engine is a 5.3-liter V8 making 355 horsepower and 383 pound-feet of torque, and at the moment, it’s the only engine available on all but the High Country trim level. That gets a 6.2-liter V8 making 420 hp and 460 lb-ft of torque. That's the same output as the previous model's optional 6.2, but both engines now come with the Dynamic Fuel Management cylinder deactivation that can shut off any cylinder in any order the computer wants as opposed to simply switching off a set bank of cylinders. Both engines also now come with a 10-speed automatic transmission.

Despite the many gears and fancy cylinder deactivation, combined fuel economy is unchanged from last year for two-wheel-drive models, while the 5.3-liter four-wheel-drive Tahoe improves by 1 mpg to 18 combined. The 6.2-liter four-wheel-drive model actually drops by 1 mpg to 17 combined. A class-exclusive diesel 3.0-liter inline-six engine will be available later, also with a 10-speed automatic. It’s the same powertrain that's available in the Silverado where it manages between 25 and 27 mpg combined. 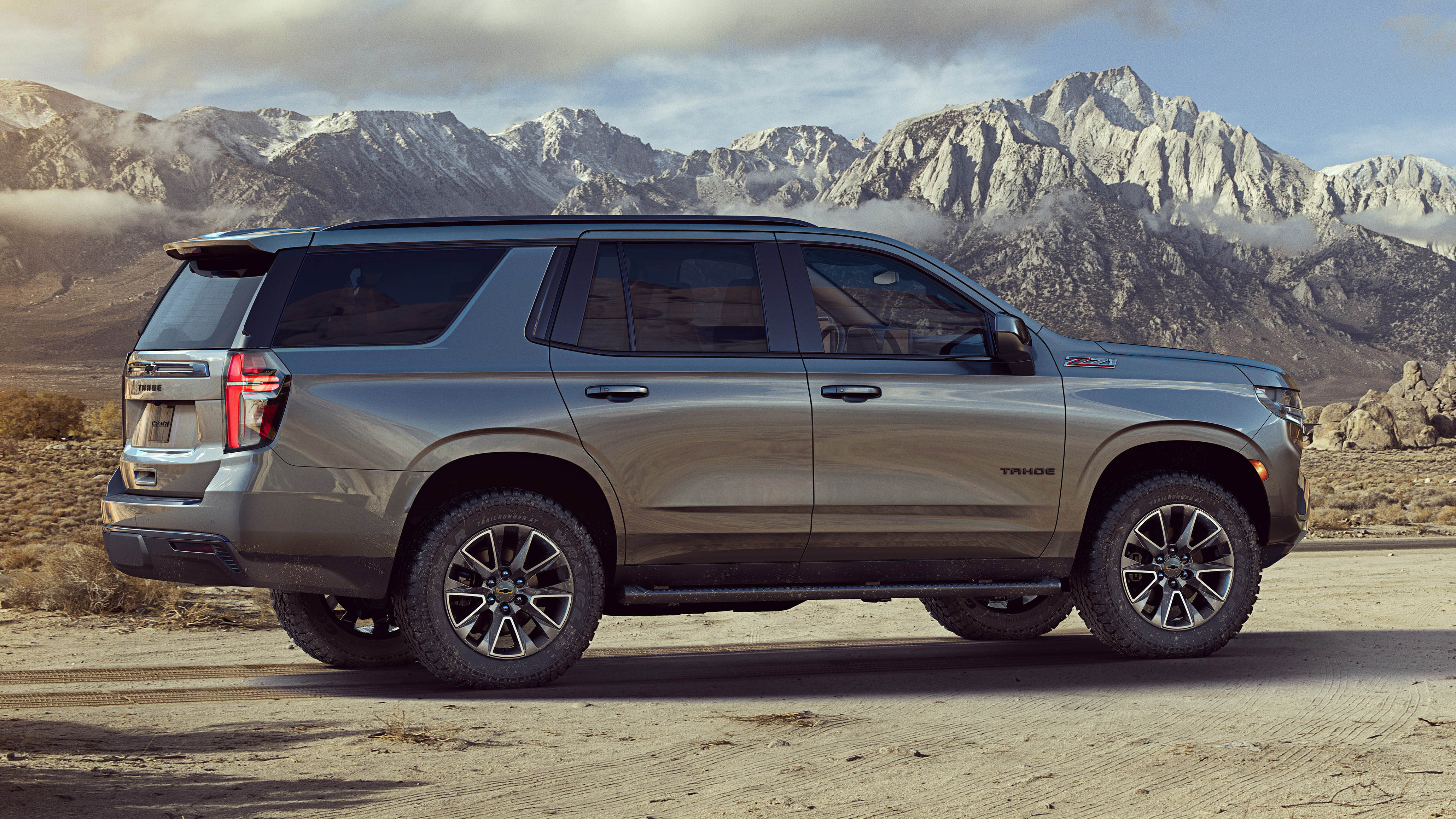 Our Z71 featured the 5.3-liter engine, and it’s a perfectly adequate engine for this full-size SUV. It’s smooth and quiet, and the cylinder deactivation is completely imperceptible. The transmission is also smooth, doesn’t hunt for gears or hold them uncomfortably long. Keeping up with traffic isn’t a problem, but acceleration isn’t exciting by any means (especially in contrast to the Expedition's standard turbo V6). If you want some giddy-up in your SUV, you’ll definitely want the 6.2-liter engine – it’s just a shame you have to get the most expensive Tahoe to access it. We suspect we’ll like the diesel engine, too, based on our experience with it in GM’s pickup trucks.

The Tahoe's ride and handling are ultimately pretty good for a full-size SUV, but there are some caveats. First, we tested a Tahoe with the optional air suspension, which could theoretically drive quite differently from one without it. Among those differences are the inclusion of different modes that tailor various vehicle settings to your preference. In default comfort mode, the Tahoe has a fairly soft ride that smooths out bumps nicely, though there's moderate body roll. Much of that is removed with the sport mode that firms up the suspension without making the ride unpleasant. Another benefit of the air suspension is the adjustable ride height. It can lower the Tahoe by two inches for easy ingress and egress, or it can raise the Tahoe by two inches for improved ground clearance. We're unsure where the fixed suspension tuning of a non-air Tahoe will lie, nor can we report about the available magnetically controlled suspension upgrade that should in theory be even better than the air springs.

One of two trucks I’ve had this week is this 2021 @chevrolet Tahoe Z71. I can’t talk about how it is yet, but I can show you the air suspension that lowers for easy access and can be raised for maximum ground clearance. @therealautoblog pic.twitter.com/4a7WP01hxt

Through corners, the Tahoe is quite composed, even over rough surfaces. Credit goes as much to the new independent rear suspension as it does the air springs. Combined with the well-weighted and quite precise steering, the Tahoe is almost fun to hustle. The problem, whether talking about the ride or handling, is that the body feels too loose and flexible. Going over bumps you get plenty of shudders and vibrations through the body – some are to be expected in a body-on-frame vehicle, including in the Expedition, but the Tahoe had more than even the Silverado. Just when you think the IRS and air springs have made the Tahoe civilized, a jittery response to a small bump shatters the illusion.

There's little to dissuade from the civility inside the radically remade interior. The rounded shape of the main dash is elegant and has a nice little cowl over the top for added visual interest. On higher trims, the dash is wrapped in nice simulated leather. It's all a sharp contrast to the lumpy, dreary Silverado interior, and indeed GM should be credited with giving the Tahoe (and GMC Yukon) a unique interior design from its pickup siblings. Ford just pressed copy and paste from F-150 to Expedition.

Controls are easy to use and access with plenty of knobs and buttons. The standard 10-inch touchscreen is large, easy to read and reach, and it’s plenty responsive. Chevy also offers quite a bit of fancy technology including a 15-inch head-up display, dual 12.6-inch second-row monitors, and a wide array of trailering cameras. Those rear screens also can connect with the navigation system so rear passengers can locate and suggest destinations. Media can be shared between the two rear screens, too, or operated separately. 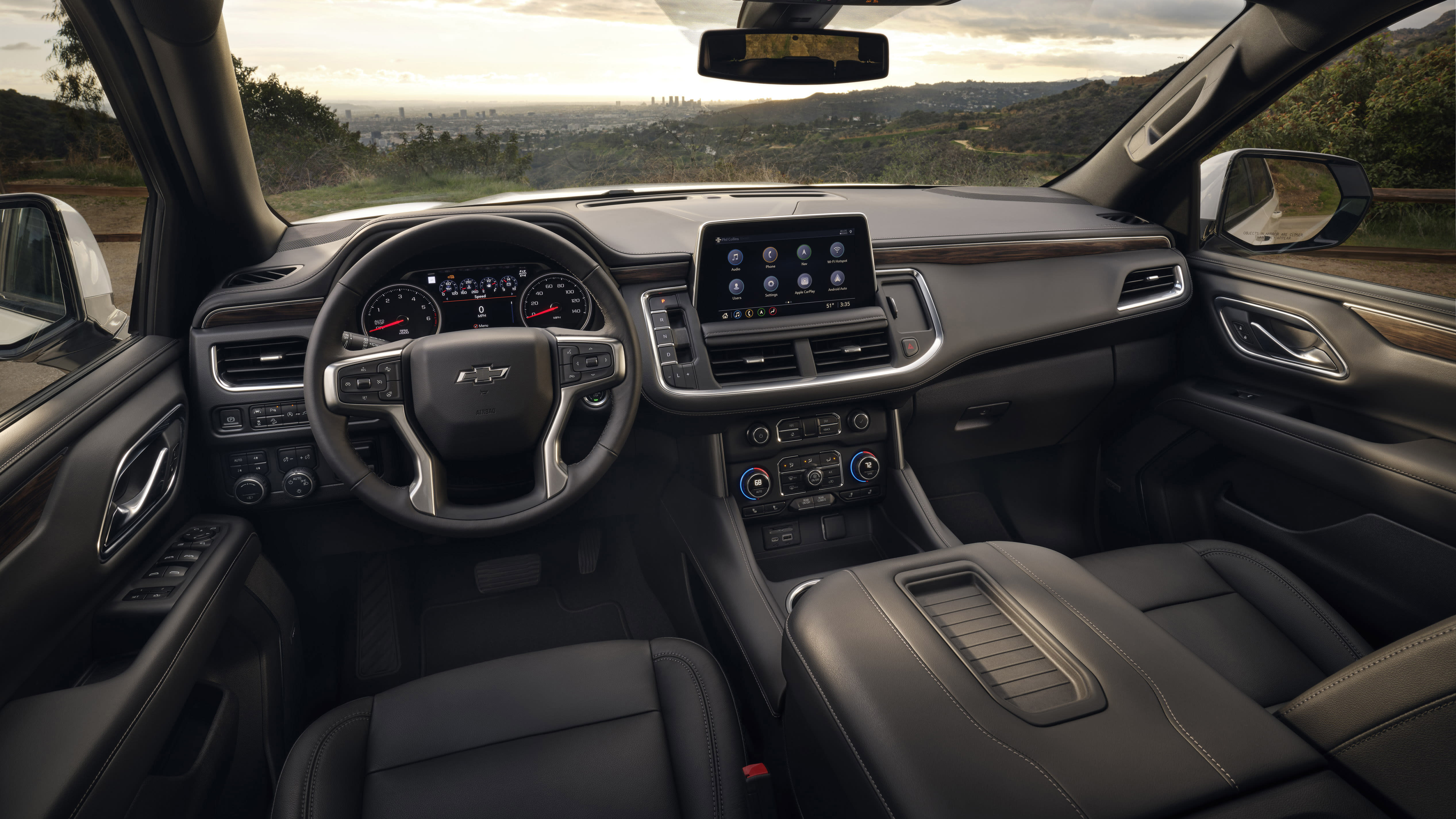 However, the highlight of the Tahoe’s cabin is its newfound spaciousness. The Tahoe has grown 6.7 inches in length, its wheelbase stretched by 4.9 inches, and perhaps most notably, the switch to an independent suspension allows the floor to be lowered and made more flat.

At the front, there's loads of head and leg room, as well as quite a bit of knee room. There’s plenty of adjustment in the wheel and seat, and a comfy position is a breeze to find. The seats are a bit flat and firm, but not too bad. Moving to the second row, which now has sliding adjustment, your 5-foot-11 author could sit behind himself in the second row with loads of room to spare, though the seats are yet firmer and flatter. As for the third row, your author could clone himself again to sit back-to-back-to-back in reasonable comfort. According to the numbers, the third row has as much legroom as the bigger Suburban, and that’s completely believable. The third row still isn’t a place an adult or grown teenager want to spend an entire road trip since its flat and firm, the wheel well intrudes a bit and the seat base remains a touch close to the floor. The Expedition's third row is still higher off the ground, more spacious and provides greater comfort. You could sit back there for quite a while. 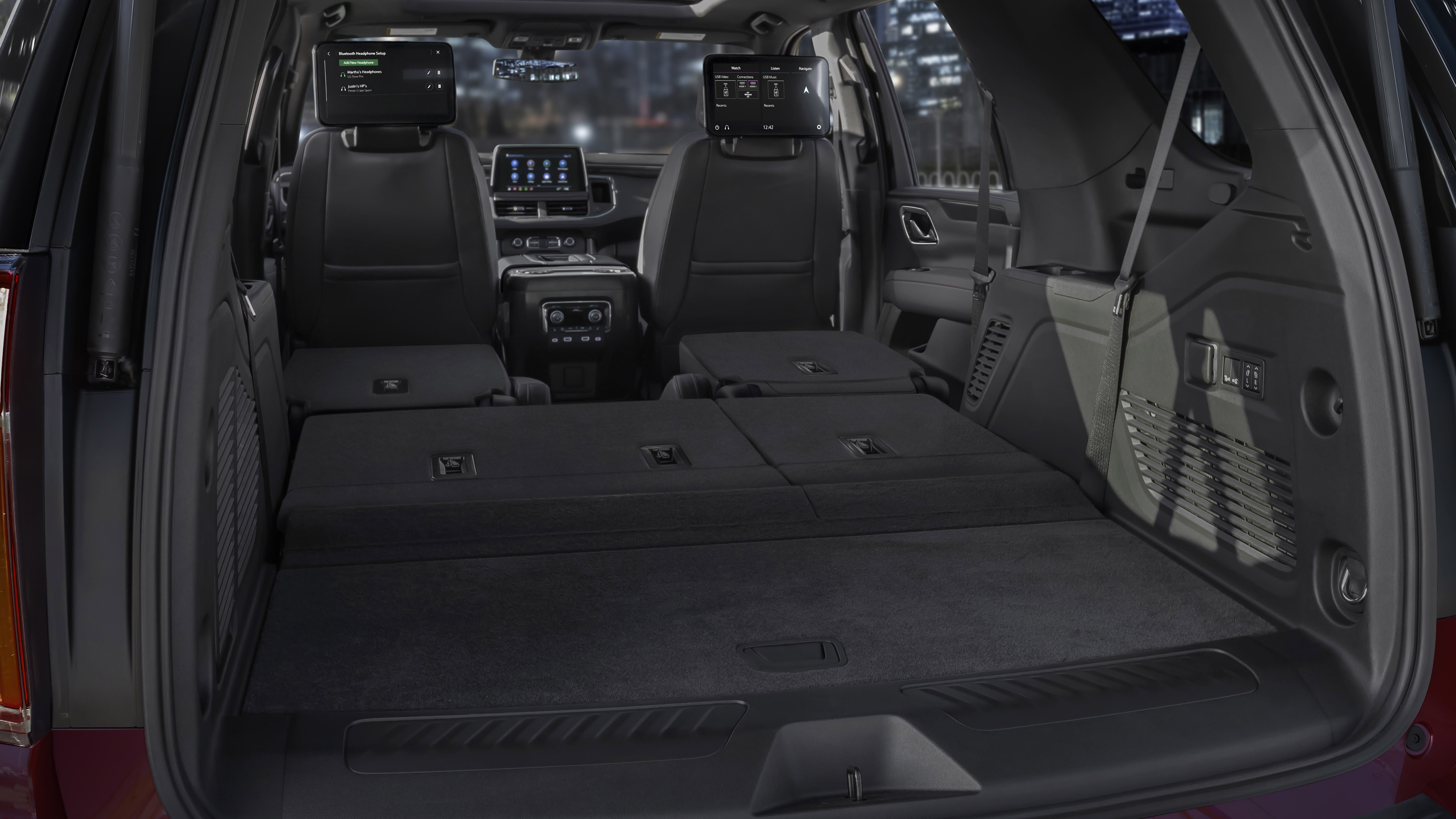 Cargo space overall has increased substantially over the previous Tahoe, too. Behind the third row, space is up to 25.5 cubic feet over 15.3 for the old model. With all the seats folded, space expands from 94.7 cubic feet to a whopping 122.9 cubes. The lower floor also means it's easier to load things inside. Maximum payload capacity is down slightly from 1,880 pounds to 1,834 pounds. Maximum towing capacity remains the same at 8,400 pounds. Keep in mind, payload and towing vary based on powertrain and trim level.

As for pricing, the Tahoe is close to the Ford Expedition. The base price is a bit higher at $55,095 for a V8, two-wheel-drive Tahoe LT versus $54,505 for a two-wheel-drive Expedition XLT with the standard twin-turbo V6. At the other end of the spectrum, the Tahoe High Country with four-wheel drive and its larger 6.2-liter V8 starts at $73,895, which slides in below the $77,085 Ford Expedition Platinum with four-wheel drive. If you’re more interested in taking your big off-road SUV off the beaten path (or at least making it look the part), the Tahoe Z71 features a unique front bumper for improved approach angle, all-terrain tires, a limited-slip differential and skid plates starting at $60,495. The base Expedition can be fitted with the FX4 package, which adds off-road shocks, a rear limited-slip differential, skid plates and all-terrain tires for $59,810, but it looks like a substantially less convincing off-road machine than the Z71.

The 2021 Tahoe is unquestionably a major improvement over its predecessor. The independent rear suspension in particular corrects the previous ride, handling and interior packaging issues, while the new cabin keeps the Tahoe fresh and modern in a segment that is mostly quite the opposite. We're not sure it's enough to make the new Tahoe an easy choice over the Expedition, but it's undoubtedly a more difficult decision than it was a year ago. 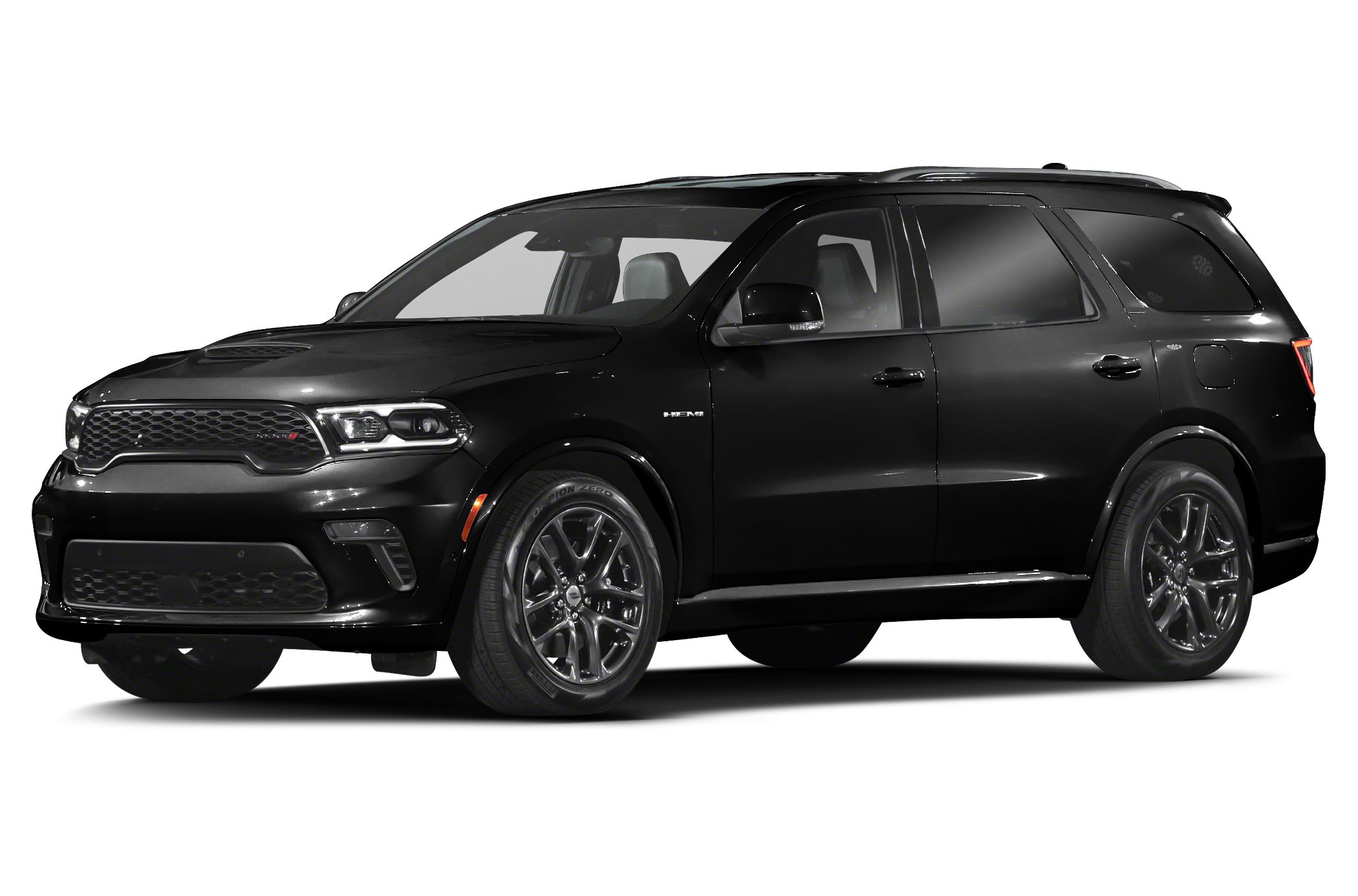 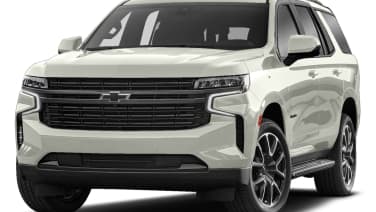 $1,011 - $2,130 Nat'l avg. savings off MSRP
See Local Pricing
I'm not in the market for a vehicle at this time. Please move this suggestion to the side for 30 days.
Huge Savings