The idea of a BMW SUV used to be provocative. There were those aghast that the brand that brought the world lithe-handling sport sedans would stoop to creating a big-and-tall family hauler. Then again, there were those delighting that the big-and-tall family hauler they desired could be made by the brand famous for lithe-handling sport sedans. Importantly, the subsequent "SAVs," as BMW called them, generally delivered on being zestier than the typical SUV.

We share this little history lesson because it's awfully hard to think of ways the 2020 BMW X3 is provocative or at least more memorable than competitors. What was once distinctive and zesty is now best described as BMW's staple people mover in a large, ultra-competitive segment. Though it still appeals more to those who favor driving engagement and performance, especially the 473-horsepower X3 M, rival SUVs have matched or bettered its zest. And while the X3's cabin is attractive and put together using premium materials, it lacks the elegance of interiors offered by Volvo and Mercedes-Benz, while not quite capturing the more futuristic aesthetic embraced by the likes of Audi or Acura.

Basically, the X3 is a nice luxury SUV; a solid, well-rounded choice. That it's not more than that is both surprising and disappointing given what we used to expect from BMW SUVs.

The biggest news for the 2020 X3 lineup is the addition of three new variants: The impressive xDrive30e plug-in hybrid and the high-performance X3 M and M Competition that offer 473 and 503 horsepower, respectively. BMW also made LED headlights standard on the base X3 sDrive30i model and shifted around some tech and connectivity packages. 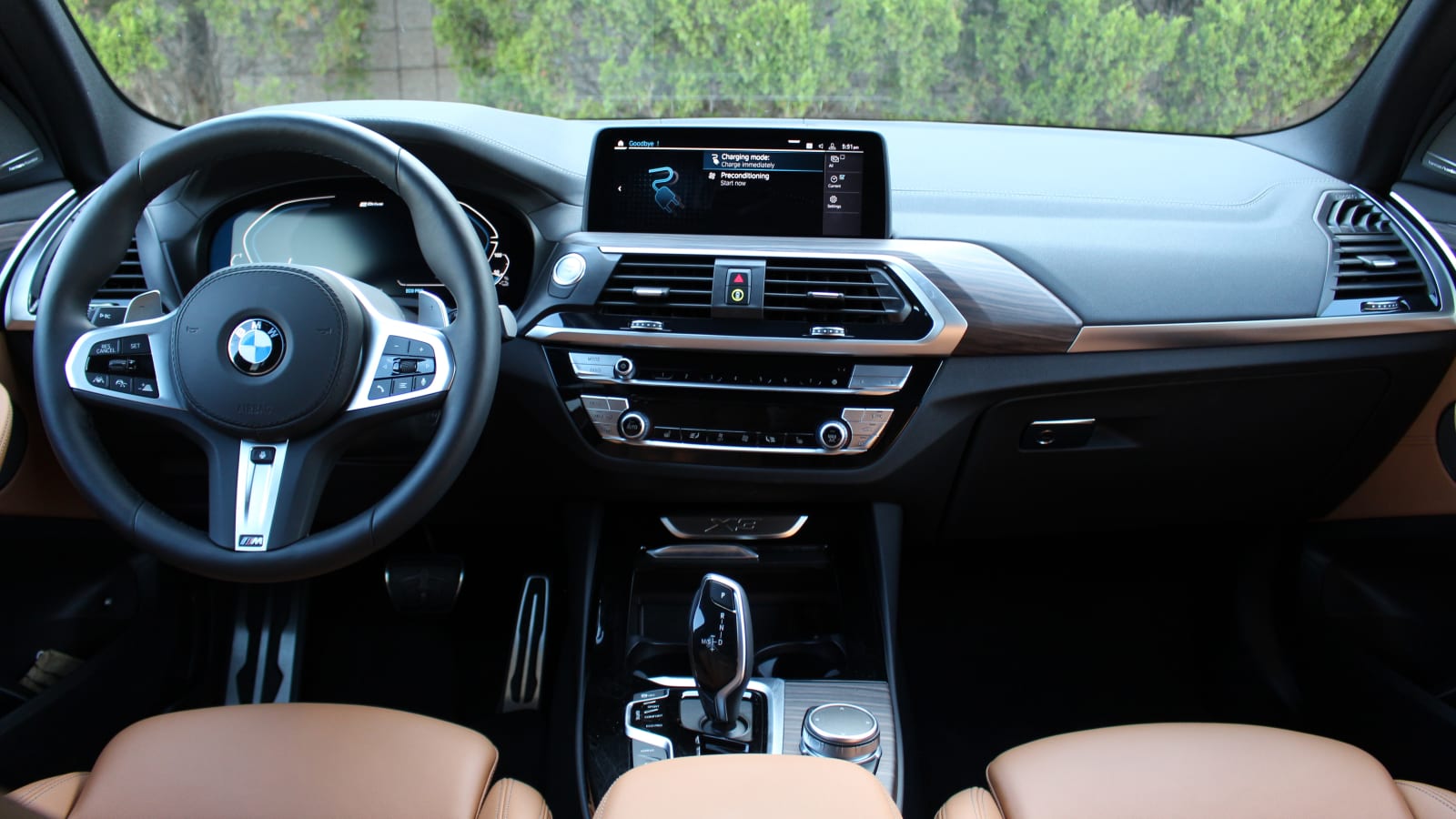 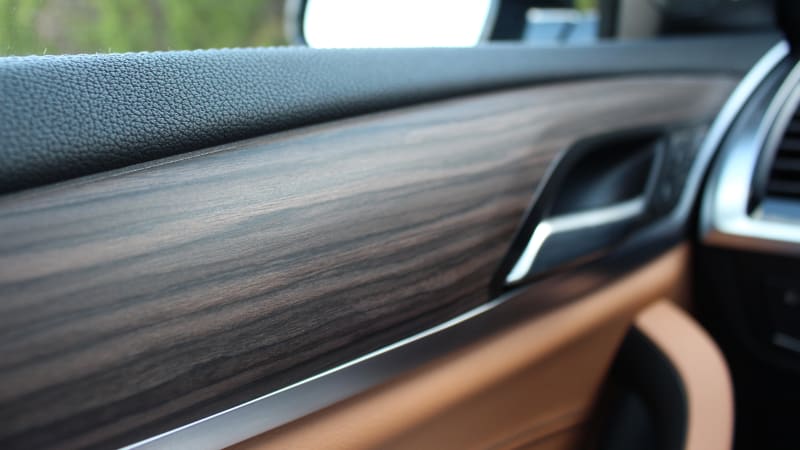 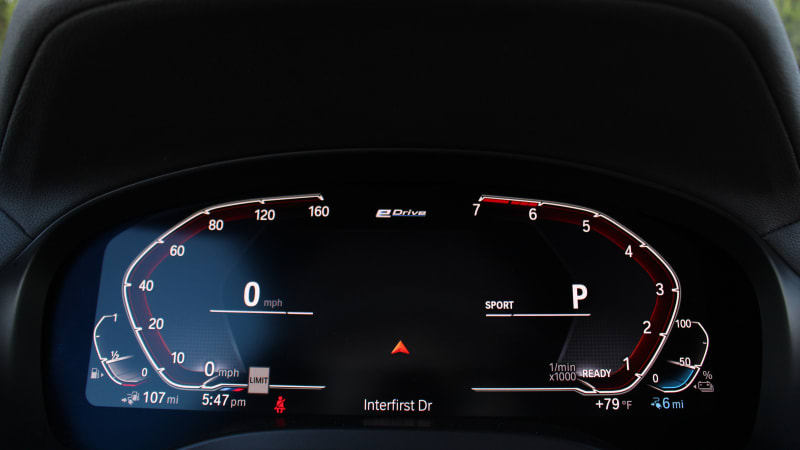 The BMW X3’s interior boasts an attractive, clean design and is assembled with premium materials. However, even when extensively optioned, it doesn’t quite rise to the obvious luxury of what you’ll see in a Mercedes-Benz GLC-Class, the ultra-cool modern design of the Volvo XC60, nor the futuristic spaceship aesthetic of an Audi Q5 or Acura RDX. Frankly, it's a bit dull.

The base upholstery is synthetic leather (typical for luxury brands), but leather can be optioned from the base sDrive30i model on up and special variants such as the M models get unique interior options to further set them apart from their peers. BMW’s front seats offer ample support and adjustment and can be had with both heating and ventilation; rear seat heaters and a heated steering wheel are also available. 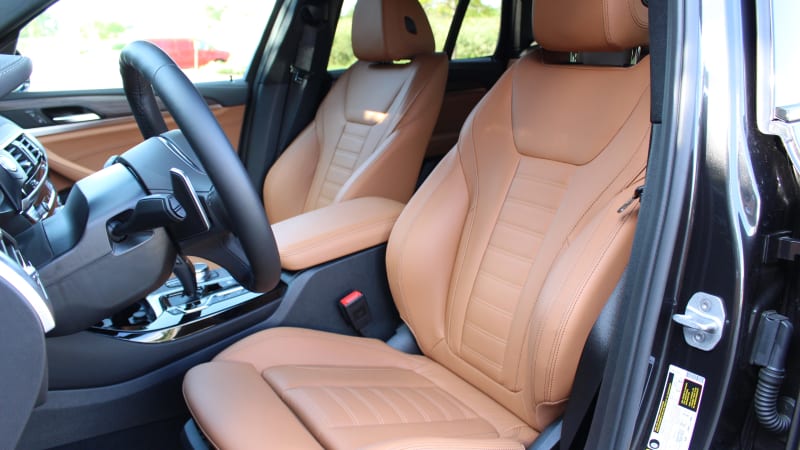 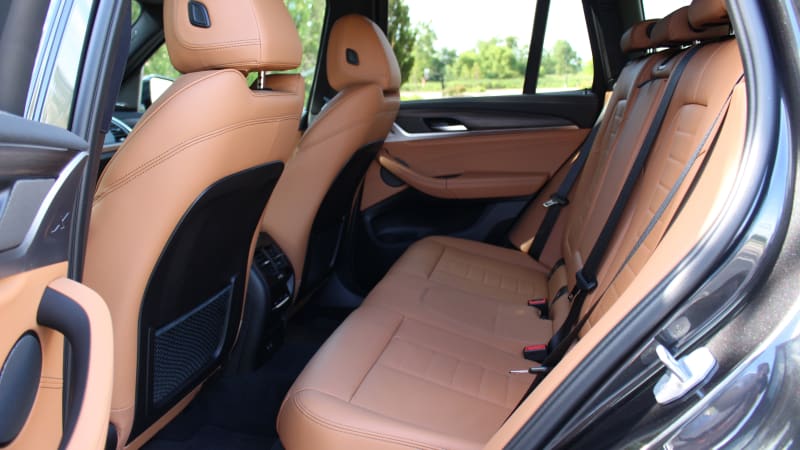 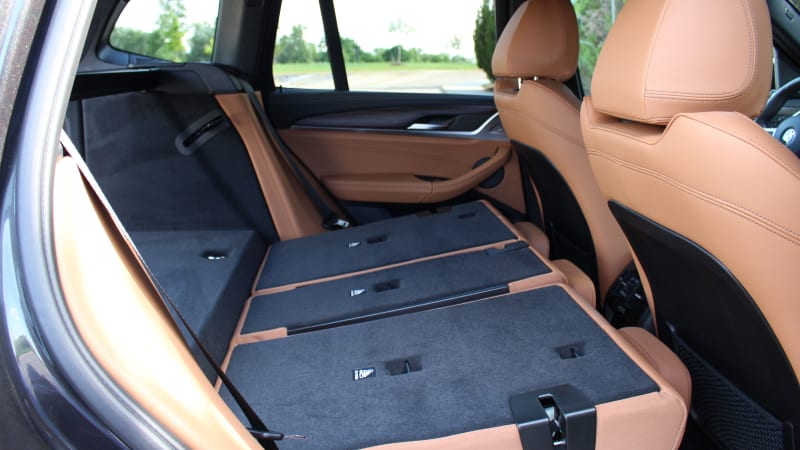 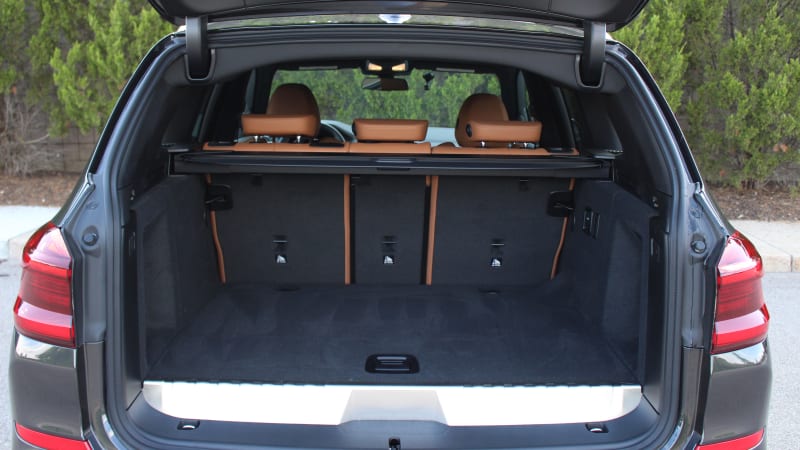 As mentioned earlier, the BMW X3 has been a key player in the compact luxury CUV/SUV space from the very beginning, and along with the Audi Q5, has helped shape the segment as it exists today. Like its European competitors, it boasts a wheelbase roughly as long as a typical midsize family sedan’s and offers ample passenger and cargo room.

The rear seats are roomy and comfortable, and the available cargo space behind the second row is competitive, though not class-leading; the x30e model gets even less due to the placement of its fuel tank beneath the rear cargo area.

Those who want something the size of the X3 but would prefer something a bit more unconventionally styled (and can afford the accompanying hit to practicality) should check out the X4, which is the X3’s coupe-like mechanical twin. 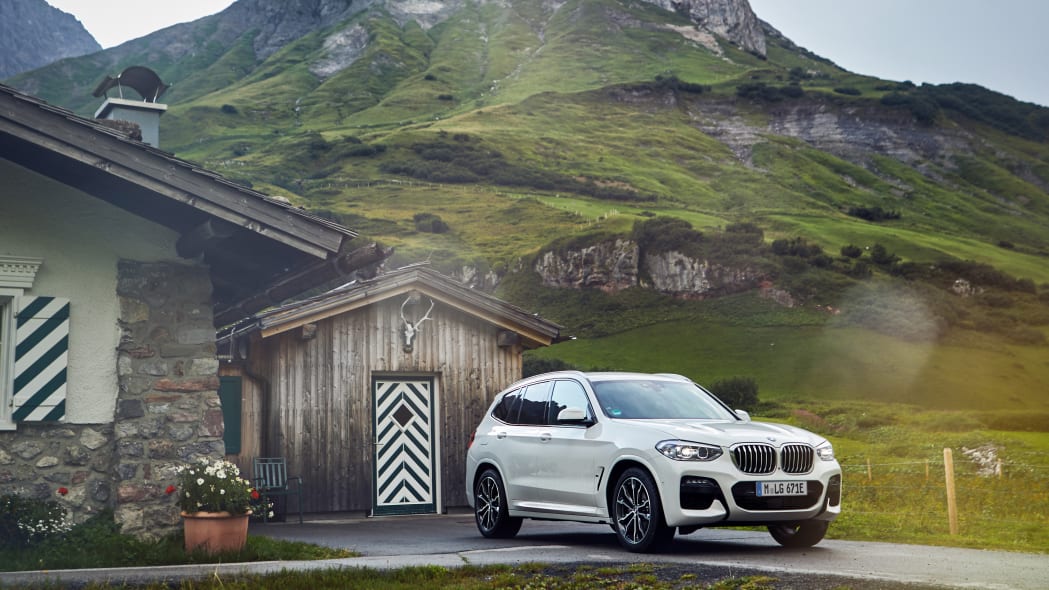 BMW offers an X3 variant for just about every performance taste. The base sDrive30i and xDrive30i are powered by a 2.0-liter, turbocharged 4-cylinder making 248 horsepower and 258 pound-feet of torque. sDrive models are rear-wheel drive; xDrive denotes all-wheel drive. Both models utilize an eight-speed automatic transmission. The sDrive30i is rated at 25 mpg city, 29 mpg highway and 27 mpg combined; xDrive models are rated at 24/29/26.

From here, the line diverges. Those who want an efficient, electrified model can opt for the xDrive30e plug-in hybrid, which offers 288 total system horsepower and 60 MPGe. Importantly, it goes an EPA-estimated 18 miles on a charge, though we managed to stretch that to 20.9. How fuel efficient it is depends on your commute and how often you can charge it.

Those who want performance, well, you’re in for a treat. BMW offers a high-output X3 M variant (pictured below) with 473 hp and 443 lb-ft of torque from the same basic 3.0-liter turbo-6. If that’s not quite enough, the Competition package bumps the power figure up to 503. All-wheel drive is again standard. The X3 M is rated at 14/19/16. 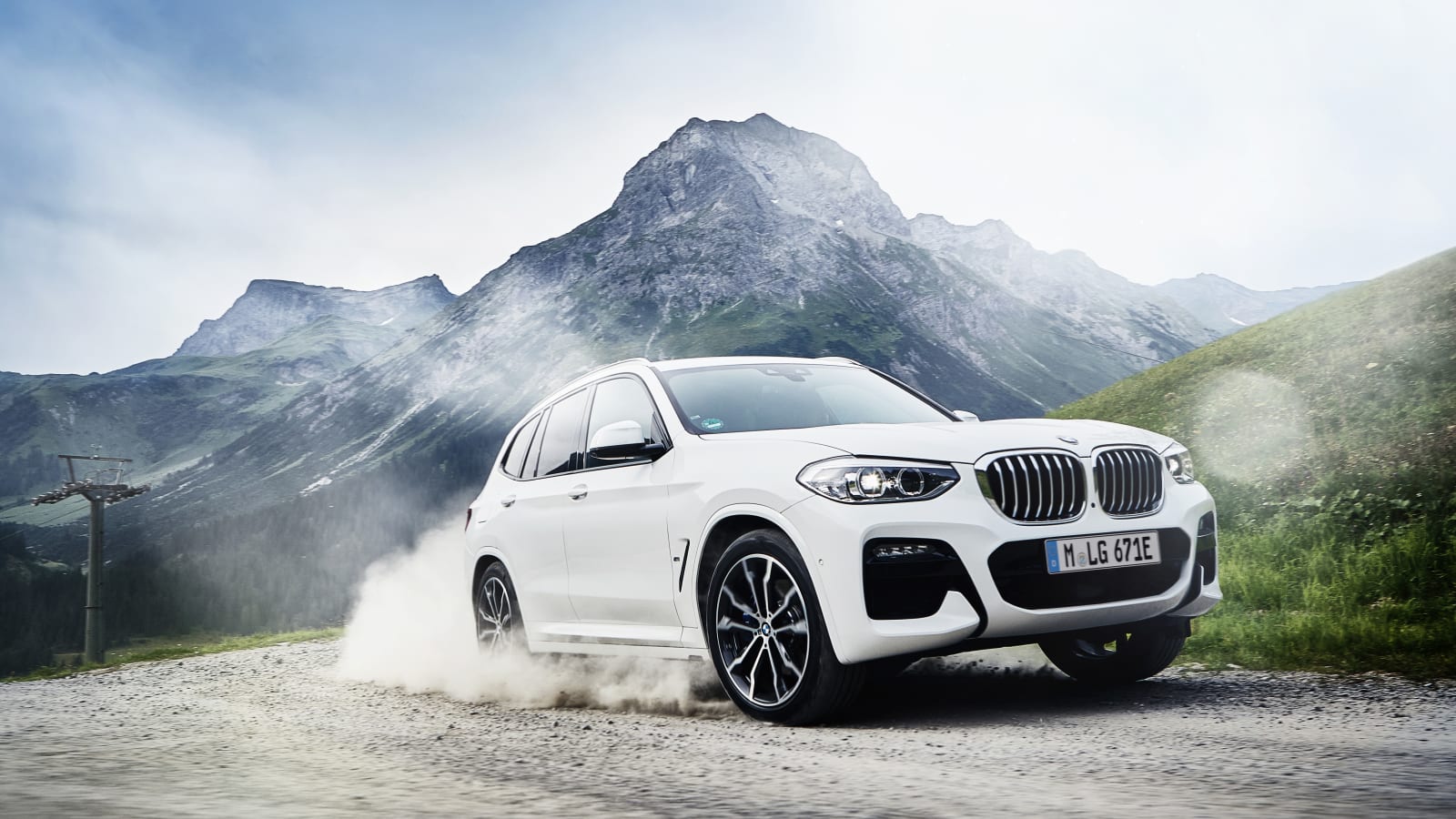 The X3 is generally pleasant and even fun to drive. The 30i variant may not have the zip of the various M-branded X3 models, but it is torquey enough for everyday driving and we found it to be quiet, smooth and undramatic. The step-up X3 M40i possesses that quintessential verve, poise and overall feel we've all come to expect from a BMW. The electric-assisted rack it's attached to remains a letdown as it's disappointingly devoid of feel, but the throttle is very responsive and the chassis is willing.

The 30e offers the same refined — even fun — experience of its non-hybrid siblings. It is available with the same performance-oriented options offered on other X3 variants and delivers brisk acceleration all the way up to highway speeds. Only when the battery is being aggressively depleted does its performance suffer.

Unfortunately, models with the sport suspension option come with a firm ride that could easily get tiresome for owners who spend most of their time tooling around a city with poorly patched pavement. The X3 M and M Competition models are more tolerable in this regard as their performance-first mission will likely appeal to drivers who prefer a sharper overall feel at the expense of comfort, and thanks to the X3 M’s adaptive suspension, it can be rendered reasonably docile when a keener edge isn’t necessary. We recommend BMW’s available adaptive dampers if you want to both explore the X3’s performance limits and preserve your vital organs.

We’ve been less impressed with BMW’s adaptive cruise control. While it incorporates some handy features, such as an optional semi-autonomous traffic jam mode, it’s still not as responsive as we’d like for normal operation.

What more can I read about the BMW X3?

Our review of the most popular X3 model, the xDrive30i. Note that despite have older model years, the cars reviewed here all belong to the current generation and our impressions remain broadly applicable.

Our review of the new X3 plug-in hybrid, the xDrive30e. Given the tax rebates that effectively erase its price premium, it sure seems like the X3 to get for those who don't put a priority on max performance. 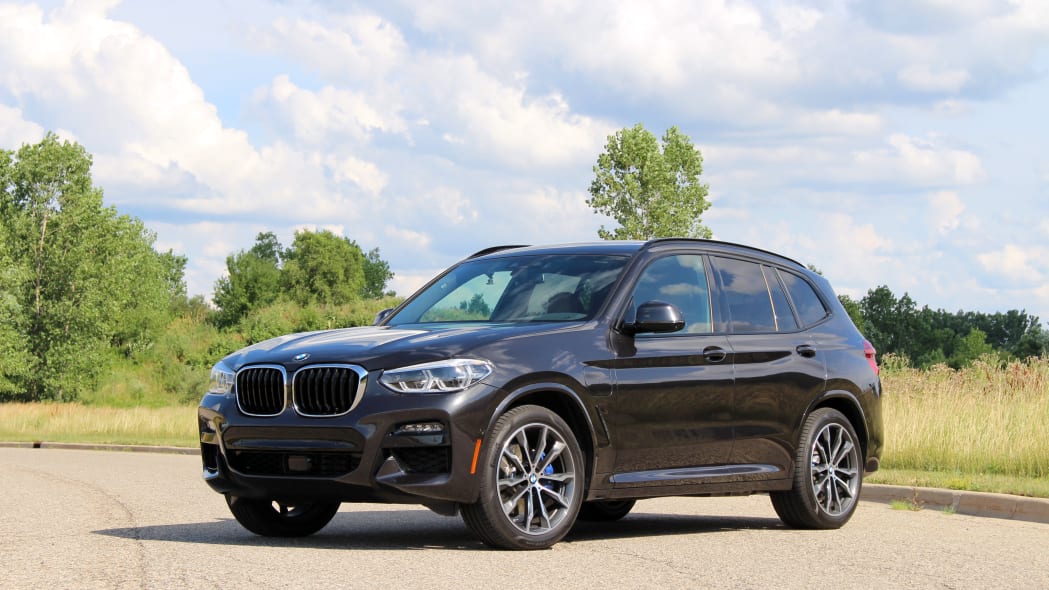 Should you actually prioritize performance, the M40i will definitely be the better bet. 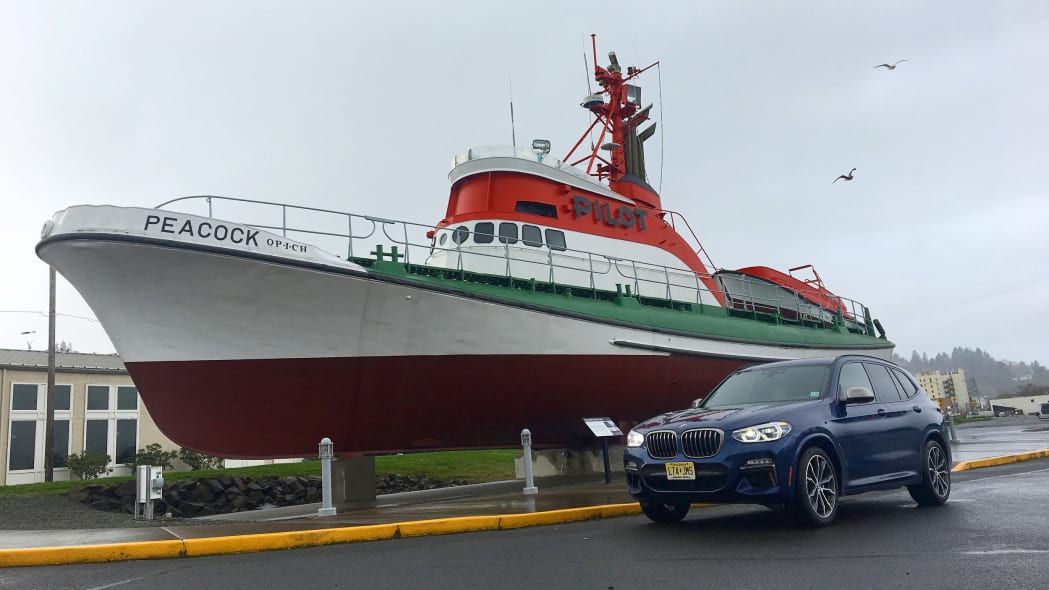 Want my styling zest? Consider the X4, which is just an X3 with a sleeker roofline, less space and a higher price. 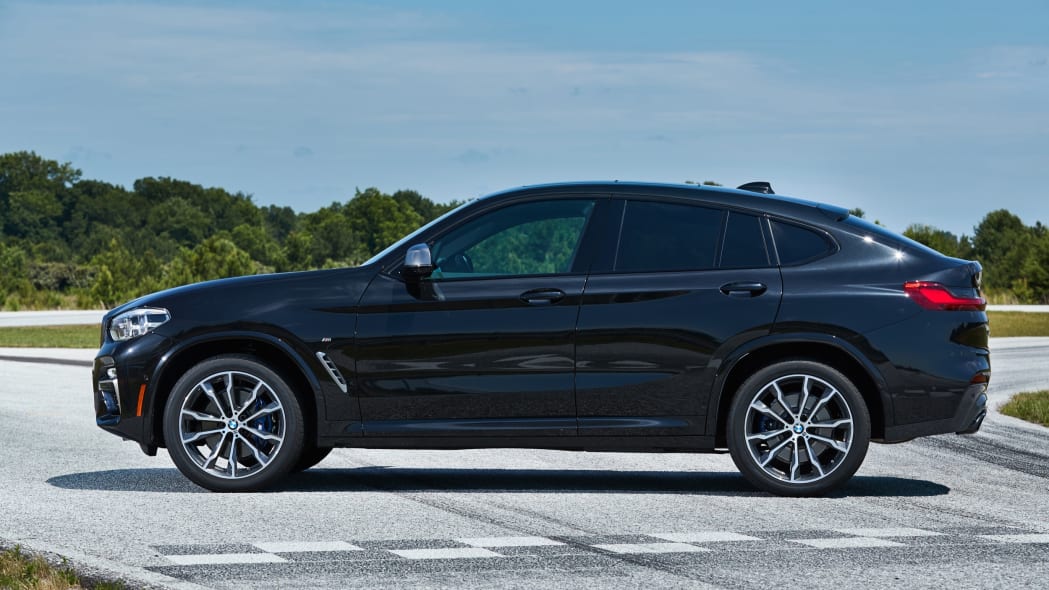 For a taste of what the X3 M provide, check out of X4 M review. The driving experience should be identical, but the interior more practical. 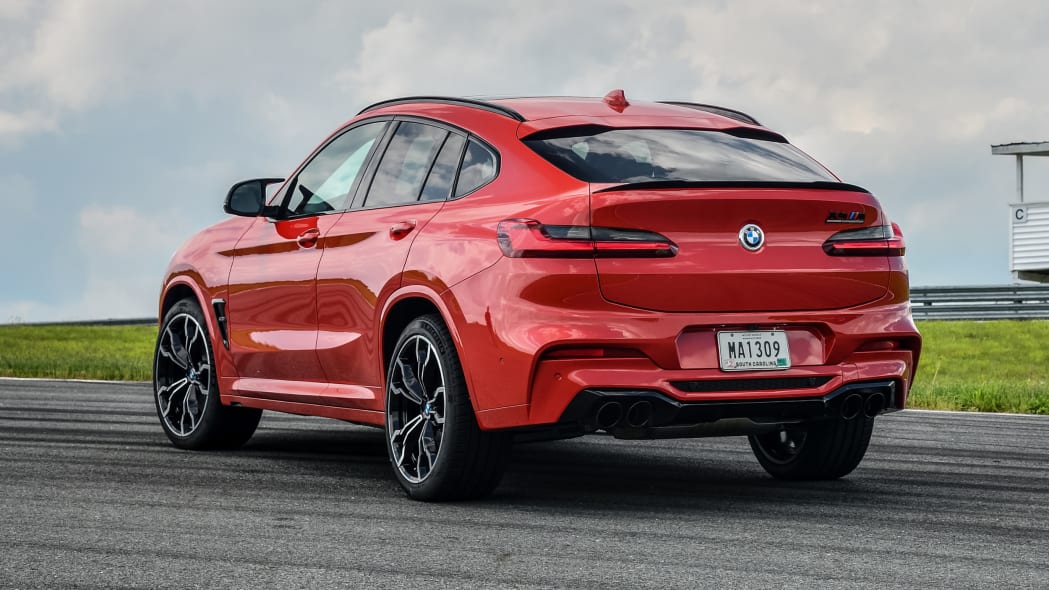 We drove them back-to-back and picked our favorites 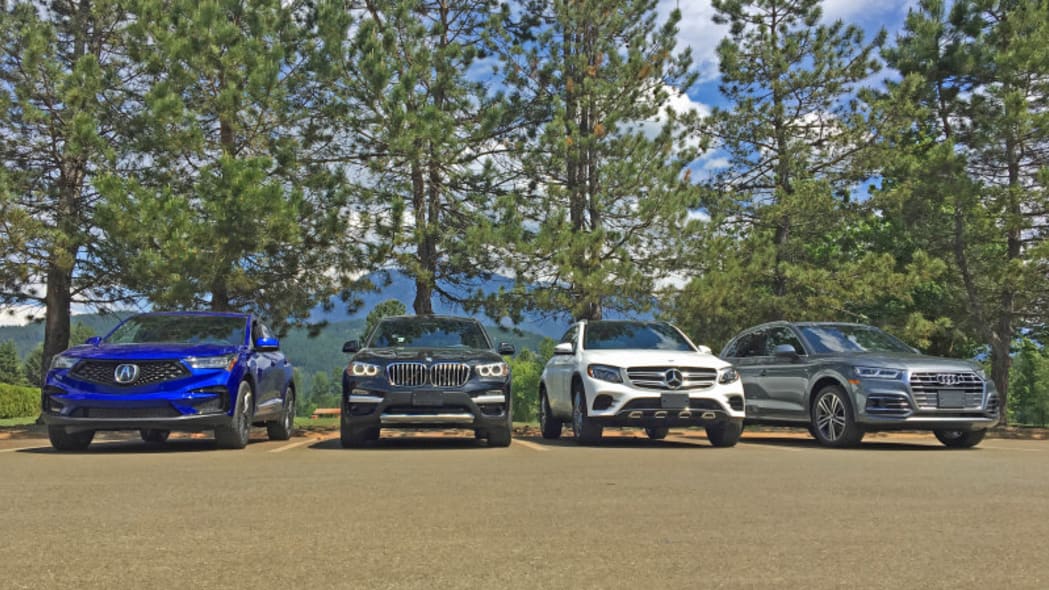 The sheer number of X3 variants may seem dizzying at first, but BMW has broken the lineup down into what are essentially four models. The 2020 BMW X3 sDrive30i model starts at $42,945 (including a $995 destination charge), and includes standard 18-inch wheels, power folding and heated side mirrors, three-zone climate control, 10-way power front seats, a 12-speaker audio system and the 8.8-inch iDrive touchscreen infotainment suite. Upgrading to the xDrive all-wheel-drive system adds $2,000.

Standard equipment on the xDrive30e plug-in hybrid is virtually identical to that of the xDrive30i, while the M40i model bakes in the M Sport package along with the larger engine. The X3 M gets an M-specific suspension along with its even more-potent engine, and also receives quite a bit more standard equipment.

BMW offers “Convenience,” “Premium,” and “Executive” packages on almost every X3, with each successive tier bundling in the equipment found in the previous package. There are also additional packages as well as many stand-alone options. As usual, you can find more information about features, specs and local pricing on the 2020 BMW X3 lineup here on Autoblog.

The following is a list of available X3 variants and their pricing with destination fees included.

As a plug-in hybrid, the xDrive30e is eligible for a $5,836 federal tax credits, while many states offer further hefty rebates. This can negate, if possibly eliminate entirely, the xDrive30e's price premium over the 30i. The 2020 BMW X3 received a five-star overall crash test rating from NHTSA. The Insurance Institute for Highway Safety awarded it a Top Safety Pick+ nod, which is the highest award it bestows. This rating applies only to models equipped with optional curve-adaptive LED projector headlights, which received a “Good” rating. The standard headlights were rated only “Marginal.”

$2,790 - $3,392 Nat'l avg. savings off MSRP
See Local Pricing
I'm not in the market for a vehicle at this time. Please move this suggestion to the side for 30 days.
Huge Savings