No BMW sells better in the United States than the X3. The model has been around for a long time at this point (since 2003), straddling the line between sporty and utilitarian in a luxurious BMW package. From a longevity and popularity standpoint, it’s the RAV4 of luxury compact crossovers. And just like the RAV4 did this year, the X3 is adding a plug-in hybrid variant.

The new crossover’s full name is the 2020 BMW X3 xDrive30e (we know, how compelling). Other than the powertrain, it’s largely similar to every other X3 variant. Most won’t even notice it’s the plug-in hybrid until they see the charge flap on the driver-side front fender, or the tiny 30e badge on the hatch. There’s no glowing blue kidney grille or overt hybrid badge. It’s clean, simple and blends in.

BMW hasn’t done anything especially flashy with the powertrain, either. Under the hood is a 2.0-liter turbocharged four-cylinder with a modest power output of 180 horses and 258 pound-feet of torque. This is bolstered by a fairly strong electric motor (107 horsepower on its own) sandwiched between the engine and eight-speed transmission, raising total power output to 288 horsepower and 310 pound-feet combined. BMW says it’ll get to 60 mph in just 5.9 seconds, which is a tenth quicker than the gas-only X3 xDrive30i. It feels quicker off the line, too, as the electric motor's torque puts a spring in its step right away.

On a full charge, the X3 xDrive30e is rated for 18 miles of all-electric driving thanks to its 12-kWh battery pack. BMW says it can run at speeds up to about 84 mph in full electric mode before the gas engine kicks on. Once the battery is depleted, the X3 operates like a standard hybrid, using electric power for starting before kicking the gas engine on when throttle input demands. It’ll go from zero to a full charge in three and a half hours using BMW’s i Wallbox charger, or many more hours using a conventional household socket. It was an overnight affair to get a full charge when we plugged it into a 110-volt outlet. We performed a range test to see what kind of electric range it could achieve in a real-world setting. Our speeds ranged from 25-60 mph on city streets and two-lane country roads, using the EcoPro drive mode setting. It went 20.9 miles before kicking the gas engine on. That beats the EPA range estimate, but only by a few miles. Driving at highway speeds predictably drains the battery much quicker than bopping around town from red light to red light where the X3 can take advantage of regenerative braking.

Many manufacturers have engineered ways to avoid compromising trunk space or rear seating space with their latest generation of hybrids and plug-in hybrids. BMW got close with the X3 PHEV, but it’s still not completely there. The lithium-ion battery pack is placed under the rear seats, which normally results in maintained cargo space. Not this time, though, as the battery's placement requires the fuel tank to be relocated over the rear axle, causing an abnormally high load floor and therefore reducing cargo space. The intrusion isn’t big enough to be a dealbreaker, though, as there is only a reduction of 1.2 cubic-feet behind the back seats.

If you’ve driven an X3 before, the experience behind the wheel of the plug-in is one you’ll recognize right away. It’s refined, sprightly and even a good bit of fun if you push it. We’ll qualify this by letting you know that our test car was equipped with every performance add-on that BMW offers. Though potentially excessive, it's at least good to know that BMW hasn’t held anything back on account of it being the greenie of the lineup. We had the 20-inch wheels wrapped in wide (275 rears, 245 fronts) high performance summer tires, adaptive dampers and the Dynamic Handling Package (adds M Sport brakes, variable ratio sport steering and BMW’s performance mode controls). Among all of that, the adaptive dampers are the must-have and can thankfully be added separately. Even if you don't care about the handling advantages they present, they sop up potholes and busted-up roads better than X3s we’ve driven without them. We highly recommend checking the $1,000 option box.

Acceleration is brisk all the way up to highway speeds. The only time it ever felt slow was when repeatedly hammering it on a backroad completely drained the battery of extra electric boost. There’s a distinct drop-off in power when the little 180-hp four-cylinder is all on its own, but the issue never presented itself in normal driving. Tossing this crossover around is thoroughly enjoyable, too. It’s more eager to dive through corners than either a regular GLC or Q5 as it changes direction quickly and with well-controlled body movements. Seeing its 4,586-pound curb weight on the spec sheet after the fact is fairly astonishing, as it feels lighter and more agile than that through corners. Those wide summer tires are helping it out a ton with sheer grip, but much of the credit goes to the X3’s chassis. It’s better than all but the Alfa Romeo Stelvio and Porsche Macan on a backroad.

The two biggest disappointments are the brakes and steering. There’s a big mushy section of pedal travel that’s verging on alarming when you lean on them coming into a corner. That float is acceptable for city driving, but it does not inspire confidence when hopping on them from speed. As for the steering, it’s the numbness we’ve become accustomed to in most BMWs. The feel is much more natural in “Comfort” steering mode than “Sport,” as the latter is unnaturally heavy to the point of being annoying.

This plug-in crossover continues to thrive during calmer adventures. There are three different master drive modes separate from the performance drive mode selector. These include Auto eDrive, Max eDrive and Battery Control. Assuming a full battery charge, in Auto eDrive, the engine will switch on at higher speeds or under heavier load requirements, but favors driving on electricity. The car will decide what’s most efficient at the time, and if you have a route plugged into the navigation system, it’ll take that into account, too. Max eDrive does exactly what it says it does. Unless you press the accelerator pedal detent to the floor, it will not turn the gas engine on. Battery Control mode will actively charge the battery while you drive to whatever preset percentage you choose. We used all modes, and they work as advertised.

There’s enough accelerative force when exclusively using electricity to keep up with traffic, but you won’t win any drag races in Max eDrive mode. Other than an unpleasant and adjustable artificial engine note that intrudes when the 2.0-liter is put under any strain, we’re left devoid of reasons to choose another, gas-only X3 for daily driving (the M40i or X3 M are waiting for those who want extra performance). The whole 18 miles of EPA-rated range you get is not groundbreaking, but it should be enough to get a lot of folks to work and back, especially if you can plug in at the office. That means you'll be burning very little gas. On the surface, price looks like the largest barrier to entry versus a standard X3. The 30e ($49,545) starts at $6,600 more than the base 30i ($42,945). However, this is before any government tax credits are taken into consideration. There's at least a $5,836 federal tax credit, which effectively makes the plug-in only $764 more than a 30i. It could go down further or actually make it cheaper when you factor in potential state credits. Either way, when you consider the 30e's advantages, it seems like the heavy favorite. A mere cubic foot of cargo space isn't enough of a detractor, nor is the lower EPA combined fuel economy rating relative the 30i when the battery is depleted. If you can't routinely plug-in this X3, it's a moot point anyway.

What about the competition, though? Mercedes has the GLC 350e; Volvo has the XC60 T8, and Audi has introduced the Q5 TFSI e for 2021. The Mercedes beats the X3’s electric range by four miles in EPA testing, plus it’s quicker and more powerful than the X3. Exactly the same can be said for the Audi when it comes to power and range (two miles more than the X3). Even the Volvo is more powerful and has 1 extra mile of electric range. However, we haven’t driven the Mercedes yet, and both of the Audi and Mercedes have slightly higher starting prices than the BMW. We’ll revisit this conversation once we've had our hands on all of these plug-ins, but the Volvo and Audi are at least worth a couple drives for comparison. The Volvo is more attractive both inside and out, but the T8’s pricey starting point could be a turn off.

The X3 suffers a tiny loss in the spec war we just laid out, but the takeaway here is that this crossover is still a superb option for somebody looking to make their luxury car a little greener while retaining BMW’s typically excellent driving dynamics. 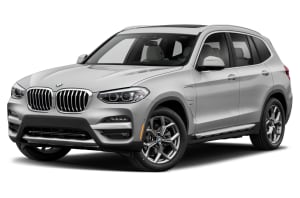