Jaguar Land Rover and Cambridge have developed a touchless touchscreen

Expect to see it in production soon

Jaguar Land Rover and the University of Cambridge are working on new touchscreen technology that eliminates the need to touch the screen. Counterintuitive, right? It’s called “predictive touch” for now, in part because the system is able to predict what you might be aiming for on the screen.

The video at the top of this post is the best way to understand how users will interact with the tech, but we’ll do some more explaining here. You simply reach out with your finger pointing toward the item on screen that you want to select. It’ll highlight the item and then select it.

Here’s how it works, according to the University of Cambridge: “The technology uses machine intelligence to determine the item the user intends to select on the screen early in the pointing task, speeding up the interaction. It uses a gesture tracker, including vision-based or radio frequency-based sensors, which are increasingly common in consumer electronics; contextual information such as user profile, interface design, environmental conditions; and data available from other sensors, such as an eye-gaze tracker, to infer the user’s intent in real time.”

Cambridge claims that lab tests showed a 50 percent reduction in both effort and time by the driver in using the screen, which would theoretically translate to more time looking at the road and less time jabbing away at the screen. If the prediction and machine learning tech is good enough, we could see this resulting in a reduced number of accidental inputs. However, on a certain level it almost sounds more difficult to point at a screen while moving than it does to actually touch a section of that screen. Without using the tech and its supposedly great predictive abilities, we can’t come to any grand conclusions. 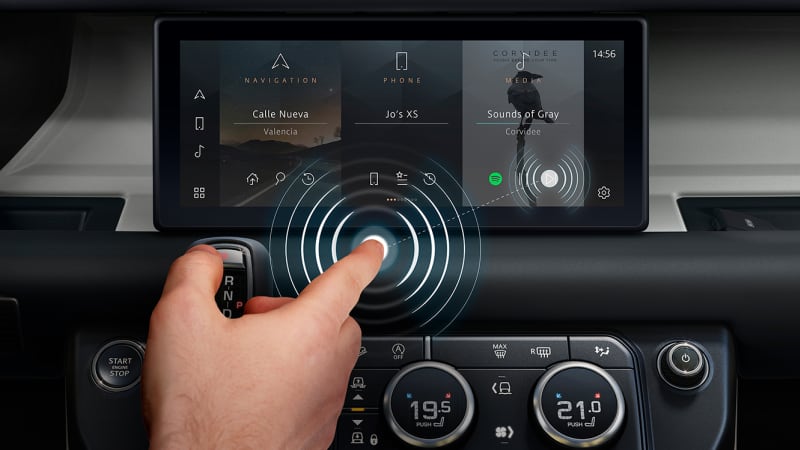 One comparison you may already be thinking of is BMW’s Gesture Controls. It’s already been addressed with a subtle diss from Cambridge:

“Our technology has numerous advantages over more basic mid-air interaction techniques or conventional gesture recognition, because it supports intuitive interactions with legacy interface designs and doesn’t require any learning on the part of the user,” said Dr Bashar Ahmad of the University of Cambridge.

Of course, this tech can be used for much more than just vehicle touchscreen control. Cambridge says it could be integrated into ATMs, airport check-in kiosks, grocery store self checkouts and more. In a world where we’re all paranoid about touching things, touchless interactions are sounding increasingly ideal.

According to the University of Cambridge’s press release, the software has reached “high technology readiness levels.” Basically, if Jaguar Land Rover wanted to integrate it into cars soon, it could. Existing touchscreens and interactive displays work with the tech, so it probably won’t be terribly long until this hits the market.