It has some beefy fenders, too A couple months ago, photos leaked of the 2022 BMW 2 Series coupe's front and rear fascias, but we didn't get a good look at the car as a whole. One of our spy photographers has rectified that with shots of more camouflaged examples that help us get a more complete image of the car.

In profile, the new 2 Series exhibits some fairly exaggerated rear-wheel-drive proportions with a very long nose and short tail. And the distance between the base of the windshield and the front wheels makes it clear this is still a rear-drive car. The front and rear overhangs look a bit longer than those on the current car. The rear pillar has a very thick Hofmeister kink design element, and it seems to have a particularly distinct notchback design. Looking at the fenders, we can see that they have pronounced bulges to give the car an aggressive look.

The front and rear are well-covered, but what is visible seem to confirm what the leaked images showed. The front headlights are narrower and taller than the current car with a more triangular shape. The leaked photos also showed that the 2 Series will get very thin and wide kidney grilles as opposed to the polarizing vertical versions on the 4 Series. The rear is more traditional 2 Series with square-ish taillights, and the model's signature integrated spoiler in the trunk lid. According to the leaked photos, the rear will have a more chiseled, angular design.

We expect the 2 Series to make its debut later this year or possibly early next year, and undoubtedly with a virtual event. Powertrains will probably remain similar to the current car with turbocharged four- and six-cylinder engines with rear- and all-wheel drive. We'll be curious to see if BMW offers a manual transmission with this generation, as the company has been phasing them out across its model ranges. 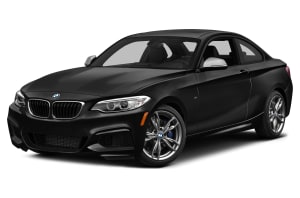