Mercedes-Benz is packing a mile-long list of technology features into the next-generation S-Class, including a handful that we've never seen in a car before. Autoblog digitally sat down with some of the engineers and designers who developed the model to learn more about why upping its tech quotient was so significant.

"Looking back, the S-Class has always been a mirror of the decade it's in," Gorden Wagener, the head of Mercedes parent company Daimler's design department, told Autoblog. "The W222 reflects the last decade, so the W223 will reflect the current one. I think it's a very progressive time, even outside of the automotive industry, so we wanted the S-Class to be very progressive. It's a bit tech-y, yeah; it's high-tech in a luxury shell. It needs to be in order to define the decade we're in. We designed the most progressive S-Class ever. It's going to be the most perfect one in terms of proportions, especially considering what you can do with a three-box design."

One of the first digital features drivers will experience after taking a seat in the new S-Class is a configurable instrument cluster with a real three-dimensional effect. This isn't an in-car IMAX theater; drivers will not need to wear 3D glasses to see the tachometer come to life. It consists of a conventional LCD display with a special pixel structure and a controllable LCD aperture grille. Mercedes added what it calls a barrier mask a few sixteenths of an inch in front of the LCD screen and linked it to the car's eye-tracking technology, so the driver's right and left eyes see different pixels, and the image is continuously adjusted as-needed. This system is complicated, and fine-tuning it likely wasn't cheap, but Mercedes said executives approved it largely because it's cool and unique.

"There is definitely a 'Wow!' effect, it looks very futuristic. It falls in line with the three-dimensional effect you see in the augmented-reality head-up display, where you see the arrows in front of the car. It's magic when you drive that, and the 3D display has a similar effect. I think it's a stunning new technology," Gorden Wagener, the head of Daimler's design department, told Autoblog. Motorists who disagree with him will be able to turn the 3D effect off. 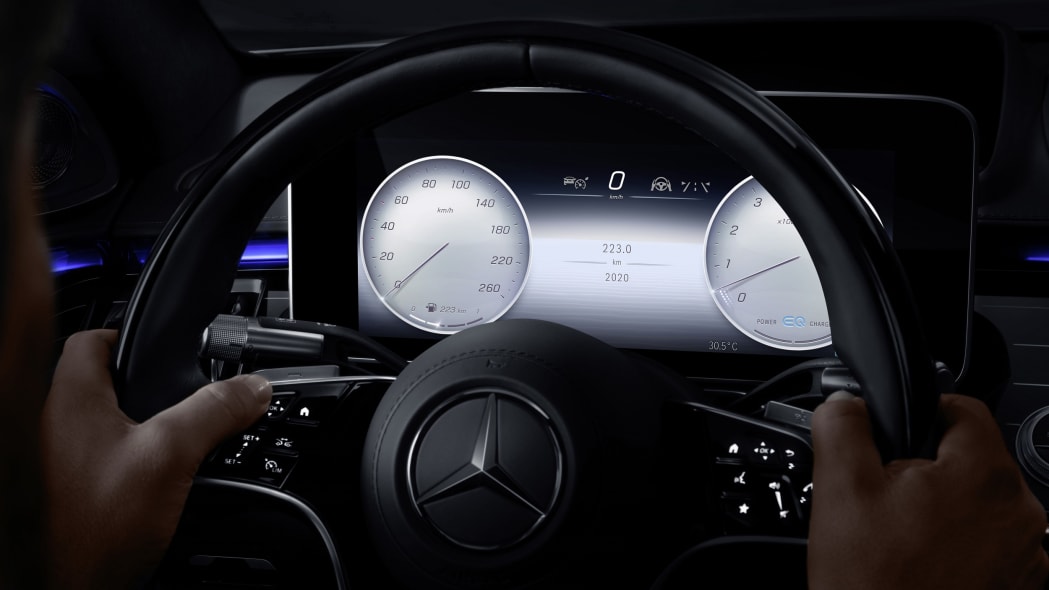 Although we haven't seen the 2021 S-Class in the metal yet, various leaks and preview images confirm it remains recognizable as the flagship of the Mercedes lineup. An understated, timeless exterior design has almost always characterized the model, so the next one should look relatively fresh in 2030, but designing an interior that needs to stay current for nearly a decade is far more difficult than it used to be because technology moves at a neck-snapping pace. Wagener told us his team of stylists took progress into account when drawing the sedan's cabin.

"We were the first ones to hang the screen in front of [the dashboard], starting with our last-generation compact cars. When we first did that, some said, "Oh, it looks aftermarket!" but now everybody is doing it. The screens are free-floating, which makes it easier to update them. Software will be updated all the time over-the-air, and of course you can manage many things like on a smartphone. Updates, goodies, whatever," he said.

Over-the-air updating is just one of the MBUX infotainment system's new tricks. As we previously reported, it will also let the passengers make in-car purchases, it will communicate with the car's various sensors, and it will allow users to control internet-connected appliances while driving. Mercedes even added a Chit-Chat function that provides answers to basic questions to keep occupants — especially younger ones — entertained.

"We have built a couple of intelligence functions [into MBUX]," said Sajjad Khan, the firm's board member for connected, autonomous, shared & services, and electric cars (CASE). "If you would like to ask about a country, like what's its capital or its population, you can do that either from the rear seats or from the front seats. It's kind of like Wikipedia, or another encyclopedia. Of course, this technology is connected digitally on the cloud side. That's why you could also ask how a dog barks, or what sounds ducks make. We added this feature for kids sitting in the rear seat; they might want to enhance their knowledge instead of playing on a mobile device."

So, if you want to hear what a duck sounds like through a high-end surround-sound system, you know what to do. Mercedes-Benz will release more information about the next-generation S-Class in the coming months, so it might have other surprises in store, and the sedan will arrive in showrooms in late 2020 as a 2021 model.