It's expected to receive a turbocharged engine

Hyundai's seventh-generation Elantra will soon receive the sporty N Line treatment, and design renderings published by the firm reveal the visual updates included in the transformation. Although it's not a full-fat N model like the Veloster, the sedan gains a more muscular design that likely hides several mechanical upgrades.

N stands for performance in Hyundai-speak, and the N Line will be positioned near the top of the Elantra range. Designers gave it an angrier-looking front fascia characterized by a model-specific grille painted black and wider air intakes with chevron-shaped inserts. It also receives side skirts, gloss black trim around the windows and on the mirrors, a trunk-mounted spoiler, as well as twin exhaust tips that stick out from the right side of an air diffuser.

Hyundai hasn't released images of the interior, though it noted the passengers will be surrounded by red accents. We don't know what's under the hood yet, but the bigger brakes visible through the 18-inch alloy wheels aren't there as decorations. Like we previously reported, power will almost certainly come from a turbocharged four-cylinder tuned to deliver at least 200 horsepower, and possibly as much as 220. An automatic transmission with shift paddles will send the engine's power to the front wheels, but it's too early to tell if a stick will be offered.

Suspension changes will be part of the package, too. Seeing an independent, multi-link rear suspension instead of the standard Elantra's more basic twist-beam setup seems likely. It will be milder than the 275-horsepower Veloster N, think of it as Hyundai's answer to the Honda Civic Si, but it still needs to be engaging to drive.

The extroverted Hyundai Elantra N Line will make its full debut online in the summer of 2020, and it will arrive in showrooms across the nation in the fall. It should land at about the same time as the Hybrid model. Fans of go-fast Hyundai models have a lot to look forward to in the coming months. Spy shots taken on the Nürburgring confirm the South Korean brand is working on a high-performance N-tuned Kona, and we hear the Venue — its smallest crossover — will spawn an N Line variant that will receive updates similar to the Elantra's. 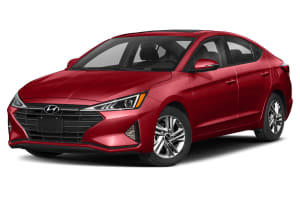