Let’s say you've got $75,000 to spend, an open mind and find yourself in the AMG section of your local Mercedes-Benz dealer. Just go with it. The obvious answer is a well-equipped AMG C 63. It has a twin-turbo V8, it's rear-drive based and looks at home pulling up to restaurants and the racetrack alike. Be it the sedan or coupe, it doesn't really matter.

But over there, probably hidden behind a GLS 63, sits something a bit different: the 2020 Mercedes-AMG CLA 45. It’s the savage, top-tier version of the entry-level Mercedes that's equal parts sedan and coupe. Remember the CLA 45 AMG? Remember thinking that Mercedes was off its rocker for offering a 355-horsepower four-cylinder. Prepare your eyeballs, because AMG has found more power. New and now built by hand like higher-end AMG engines, this 2.0-liter turbocharged inline-four manages 382 horsepower and 354 pound-feet of torque. That's obviously encroaching on 200 hp per liter, but in Europe, the CLA 45 S version actually surpasses the mark with 416 hp. That makes it sound like we’re getting shortchanged here, which we are, but 382 horses from such a tiny package is still plenty bonkers.

The sheer hilarity of such a power figure out of a 2.0-liter is enough to intrigue, but remember, this is still a CLA. Conventional wisdom says it’s supposed to be hamstrung by a front-wheel-drive platform and the reputation of being the cheap poseur’s Mercedes. And while it’s fair to assume a model’s reputation will mean a great deal to some potential luxury car buyers, it shouldn't matter one iota once you get behind the steering wheel. Mercedes has gone to great effort to make the CLA 45 feel much less like a front-drive-based AWD car, and more like a rear-drive-based AWD car. Take the silly Drift mode. Once you hop through some electronic hoops, the CLA 45 will spin around in perfect circles until you run out of rubber or get bored. It’s really quite something. Calling it Donut Mode would be just as accurate.

This car’s tendency to get a little sideways doesn’t start and end there, either. Crank the mode dial up to Sport+ or Race, turn traction control off, and apply power. The CLA 45 wags its tail exiting corners and oversteers without trying too hard. It’s a seriously pleasant surprise given the CLA’s front-drive underpinnings. 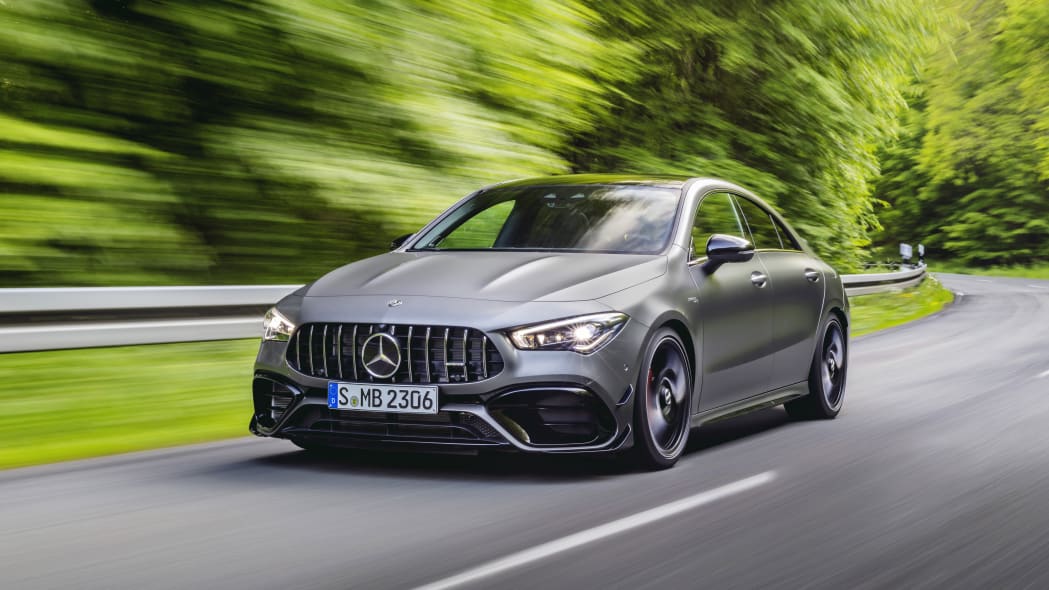 Thank the 4Matic+ all-wheel-drive system with “AMG Torque Control.” Power can be “completely variably distributed between the front and rear wheels,” says Mercedes, which allows all the power to be locked to the rear wheels. But there’s more to it. The new rear axle differential has two electronically controlled multi disc clutches, and each is connected to a rear axle drive shaft. This allows Mercedes to distribute that power in a completely variable fashion to either rear wheel. In Drift mode, the car is able to send power to the outside rear wheel and prepare the ESC for desirable drift characteristics. That gets the CLA spinning instantly and allows it to go on with such little effort from the driver. The experience is different than say, a Miata, or Camaro. More of a, “Hey, you’re along for the ride, here we go” type of feeling than you actively correcting the throttle and steering wheel to maintain perfect circular motion.

Of course, the 382 hp is the real headline here, backed up by a redline that goes all the way up to 7,200 rpm. If going fast in a straight line is more your thing, this little sedan will get to 60 mph in just 4.0 seconds before topping out at an electronically-limited 155 mph — the AMG Driver’s Package increases that top speed to 168 mph. The sprint to 60 mph is only 0.1 second behind a C 63 and just 0.2 seconds behind the C 63 S sedan. Assuming you use the violently good “Race-Start” launch control feature, it’s going to hit the mark every time, too. Mercedes is kind enough to put a 0-60 mph timer within the infotainment system, and although not equivalent to a proper instrumented test, the best we managed was 3.84 seconds. It would consistently crack off sub-four-second 0-60 mph runs without breaking a sweat in the early summer heat.

Speaking of which, there’s no lack of heat generated by the new M139 engine. Compared to the CLA 35, the engine is rotated 180 degrees — Mercedes claims improved air ducting from this move, with shorter distances and fewer diversions on both the intake and exhaust side. Turbocharger technology is also borrowed from the AMG GT, there's a new two-stage high-performance intercooler, and AMG engineered a new state-of-the-art cooling system that can cool the cylinder head and crankcase to different temperatures. All of this is good since Mercedes says charge pressure peaks at 2.1(!) bar, or 30.5 psi. That could be shocking, but given the power figure, one would expect this engine to basically be a turbocharger with a block and head hanging off of it.

Not much happens right away when the throttle is depressed sans launch control from a standstill. The revs rise to about 3,000 rpm and chill there for a quick second. Then, it’s party time. Bang, bang, bang. Were those gunshots? Nope, it’s just AMG being AMG. Two hasty shifts happen before the car reaches 60 mph in a chorus of whooshes and pops. The eight-speed dual-clutch transmission is masterful. Shifts are instant and hit with authority when accelerating hard, pointedly kicking us in the back. Pull the big, metal flappy paddle higher up in the rev range, and each shift is accompanied by a detonation. If the goal was to be heard anywhere and everywhere, the CLA 45 earns an A+. The engine and exhaust note plays an aggressive song out of its decorative quad-tipped exit. Some actually assumed there was a V8 under the hood, but the C 63’s actual 4.0-liter twin-turbo V8 rumble still gets the nod for noise. 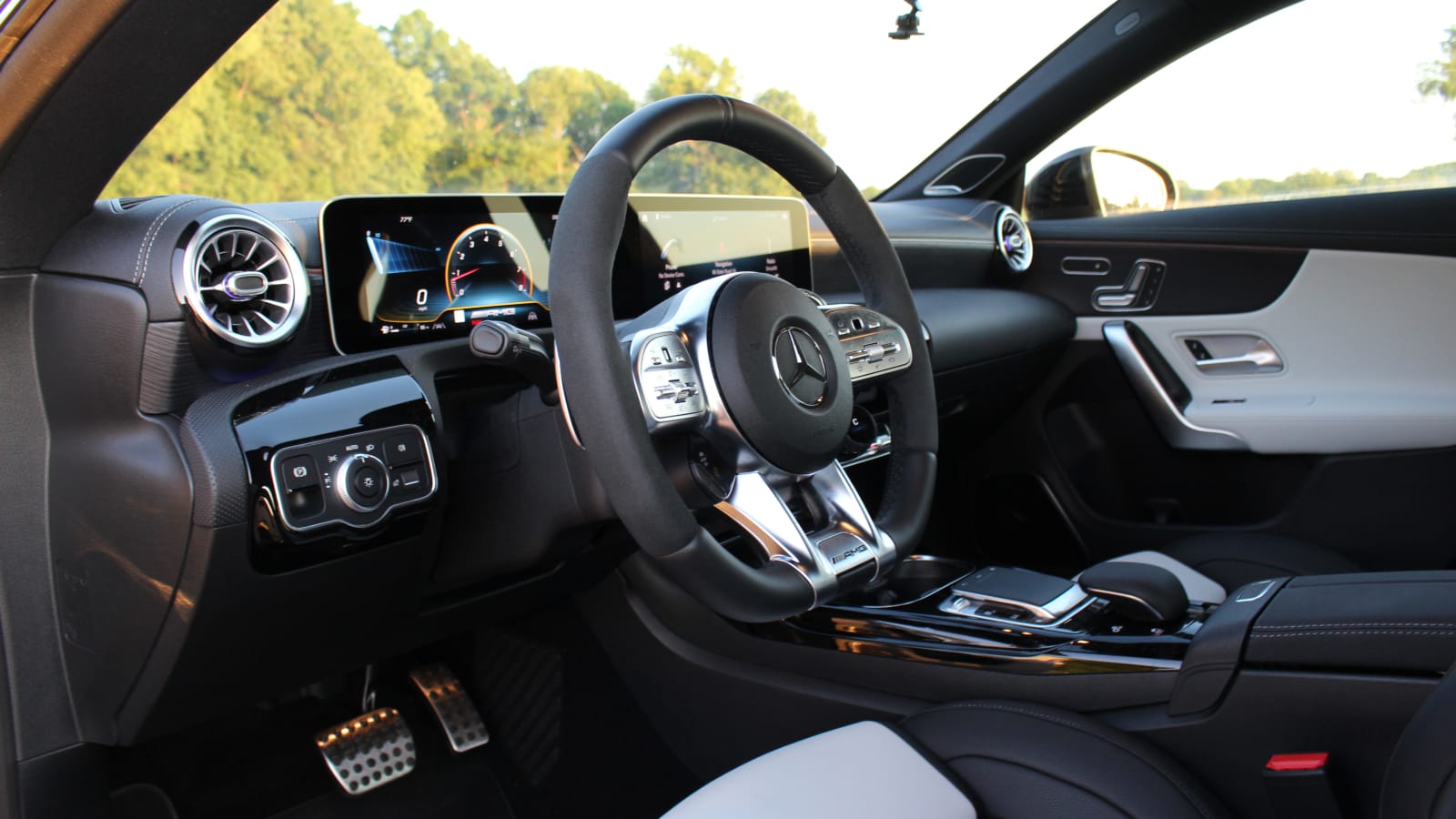 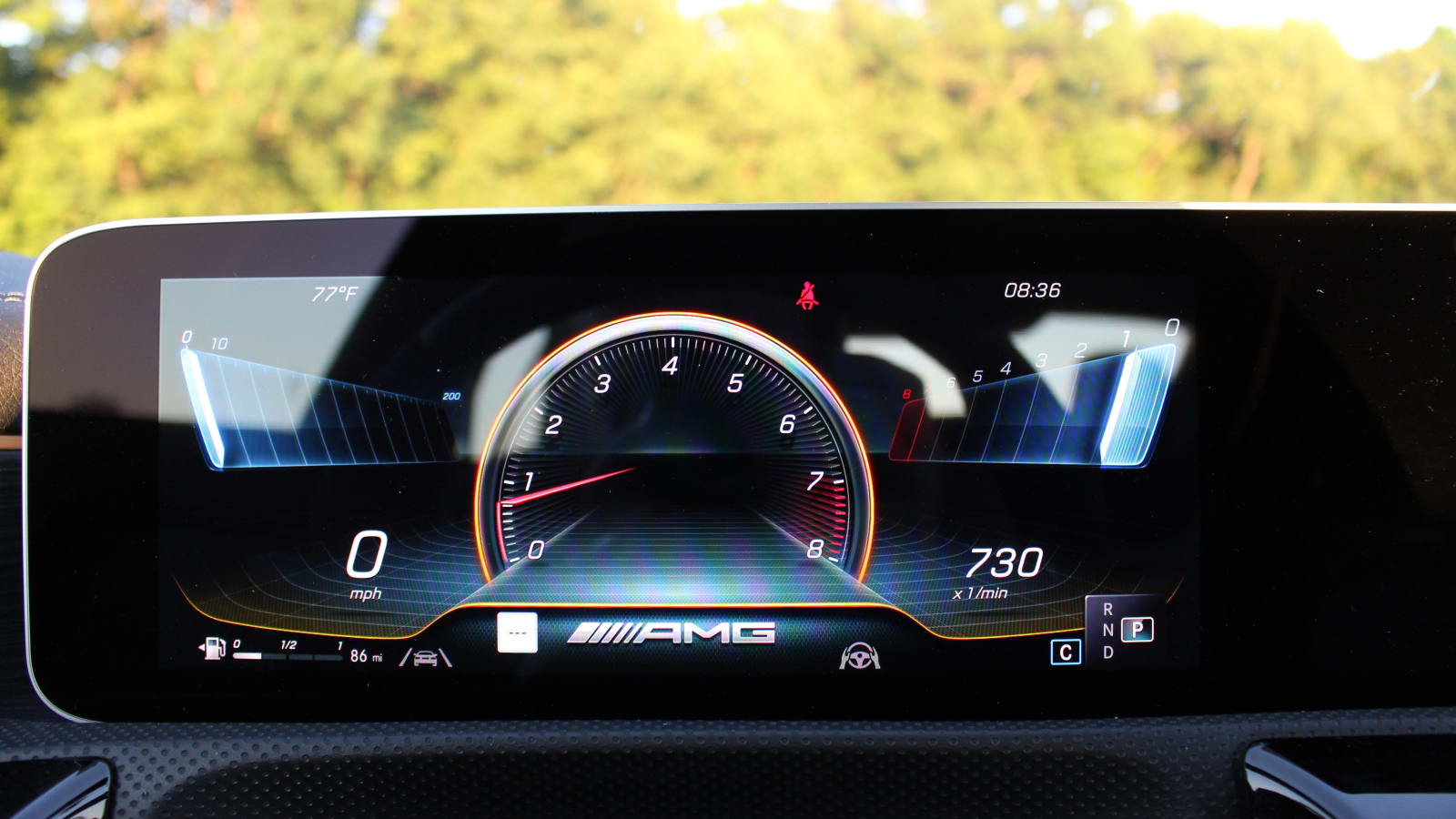 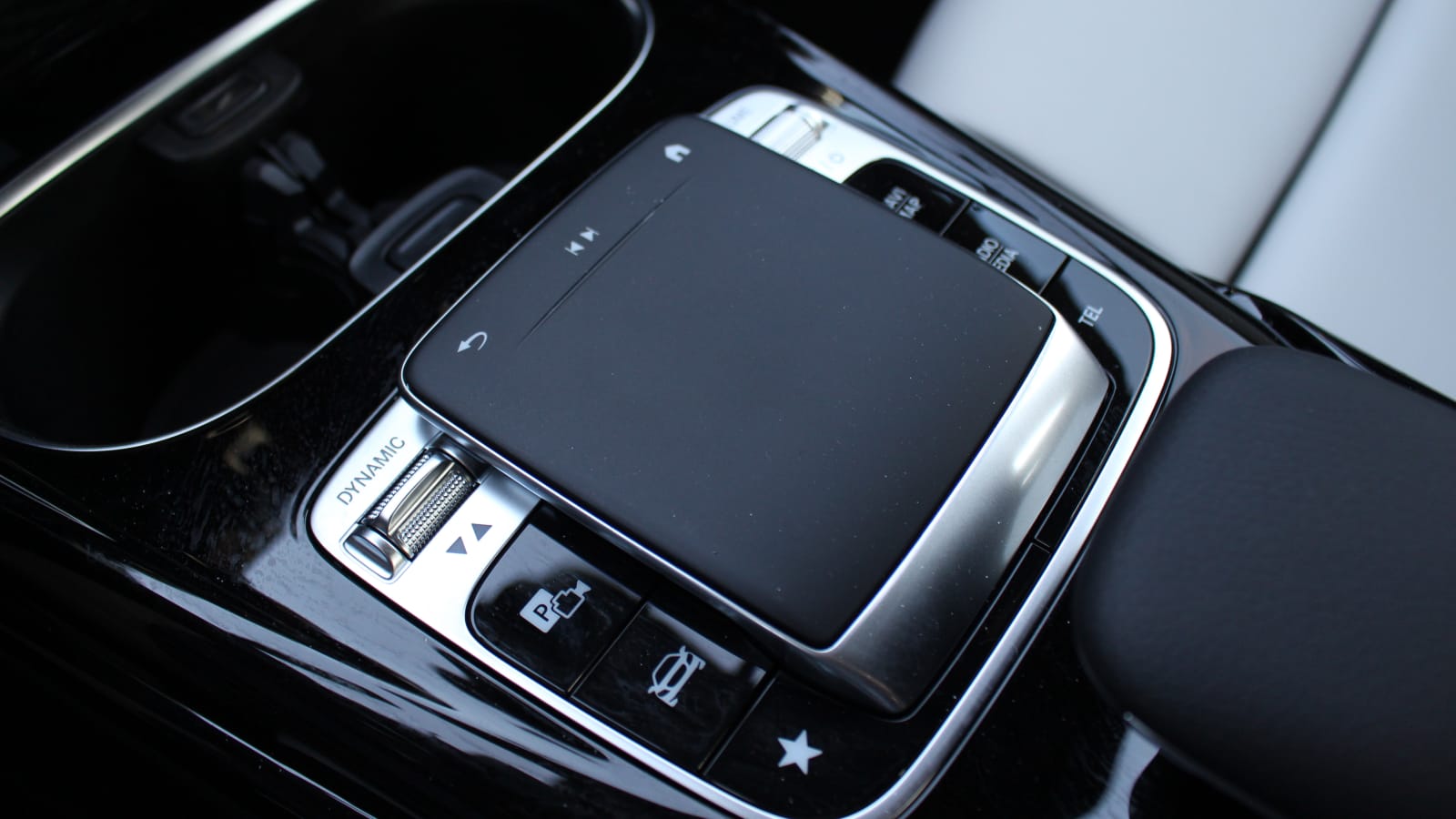 The CLA 45’s standard suspension is passive, but our test car had the optional adaptive AMG Ride Control suspension. There are three settings of stiffness available, but the system also operates automatically, changing the damping forces for the road conditions. Comfort mode isn’t plush, but it wasn’t so bad considering how capable this car is when dialed up to the sportier settings. Only a small amount of body roll is left when the firmest mode is engaged.

The CLA 45 turns in with a little twist of the faux-suede-covered wheel, and the Michelin Pilot Sport 4S tires stay glued to the road. Lay the power down mid corner, and you can feel the car being pushed through by the rear wheels (even stepping out at times), as opposed to being pulled through by the fronts. It's not just in Drift mode when the CLA 45 feels like a rear-drive-biased all-wheel-drive car.

There isn’t much road feel transmitted back to the driver through the steering wheel, but you also don't feel isolated from the road. If anything, the steering weight could be dialed back a smidge, as the way it loads up is a bit much in its heavier setting, verging on artificial. Choosing a custom setup in Mercedes’ Individual mode will let you change all the settings independently to a preferred combination if one of the presets like steering weight is bothering you.

Hopping on the brakes is a non-event. Standard AMG-branded four-piston front calipers and single-piston rear calipers clamp onto ventilated and perforated brake rotors, but once again, our test car was upgraded with larger six-piston front calipers and bigger rotors. No fade was detected after a lengthy workout, but then these brakes are meant for track use, so that's as it should be. 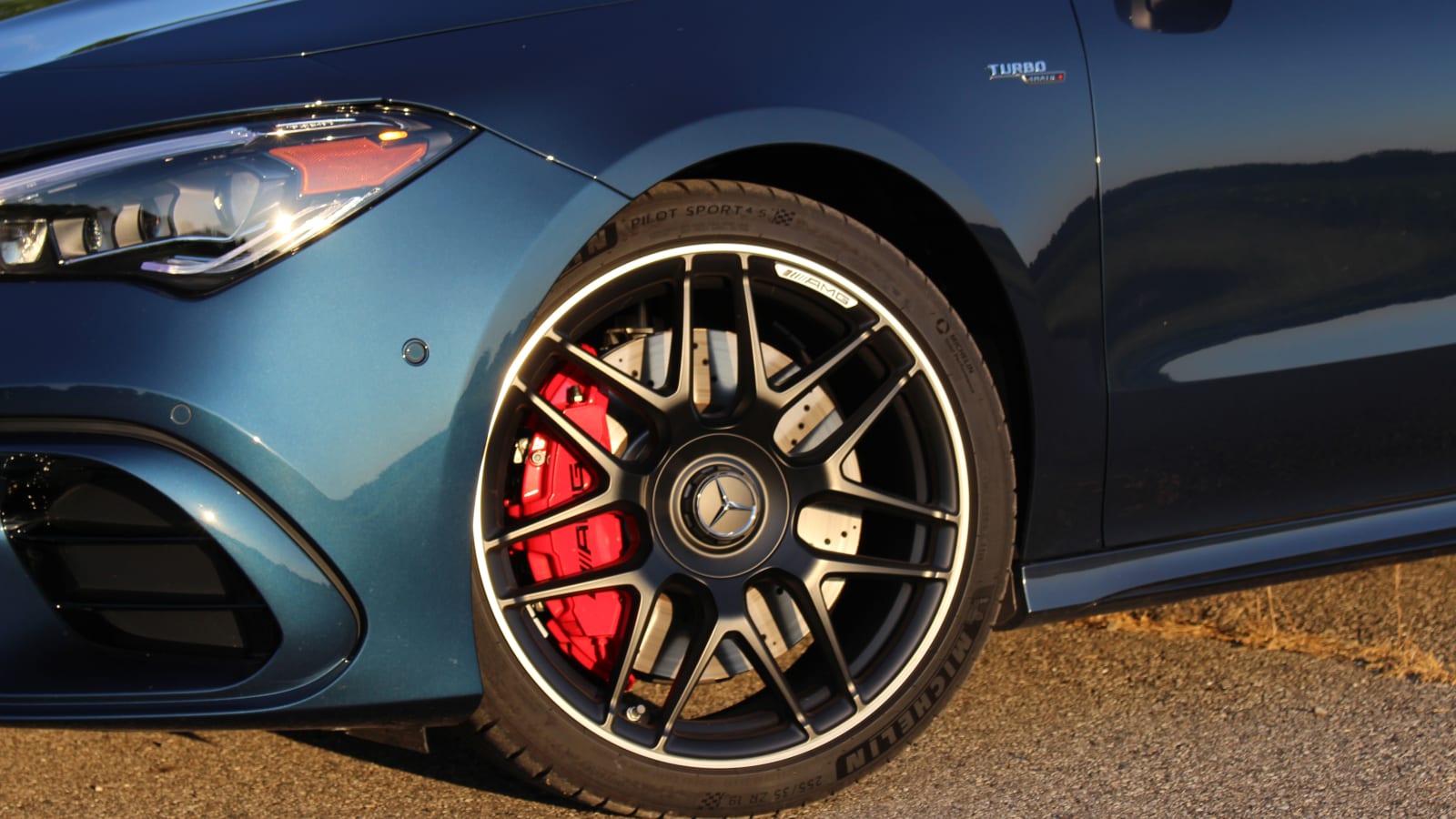 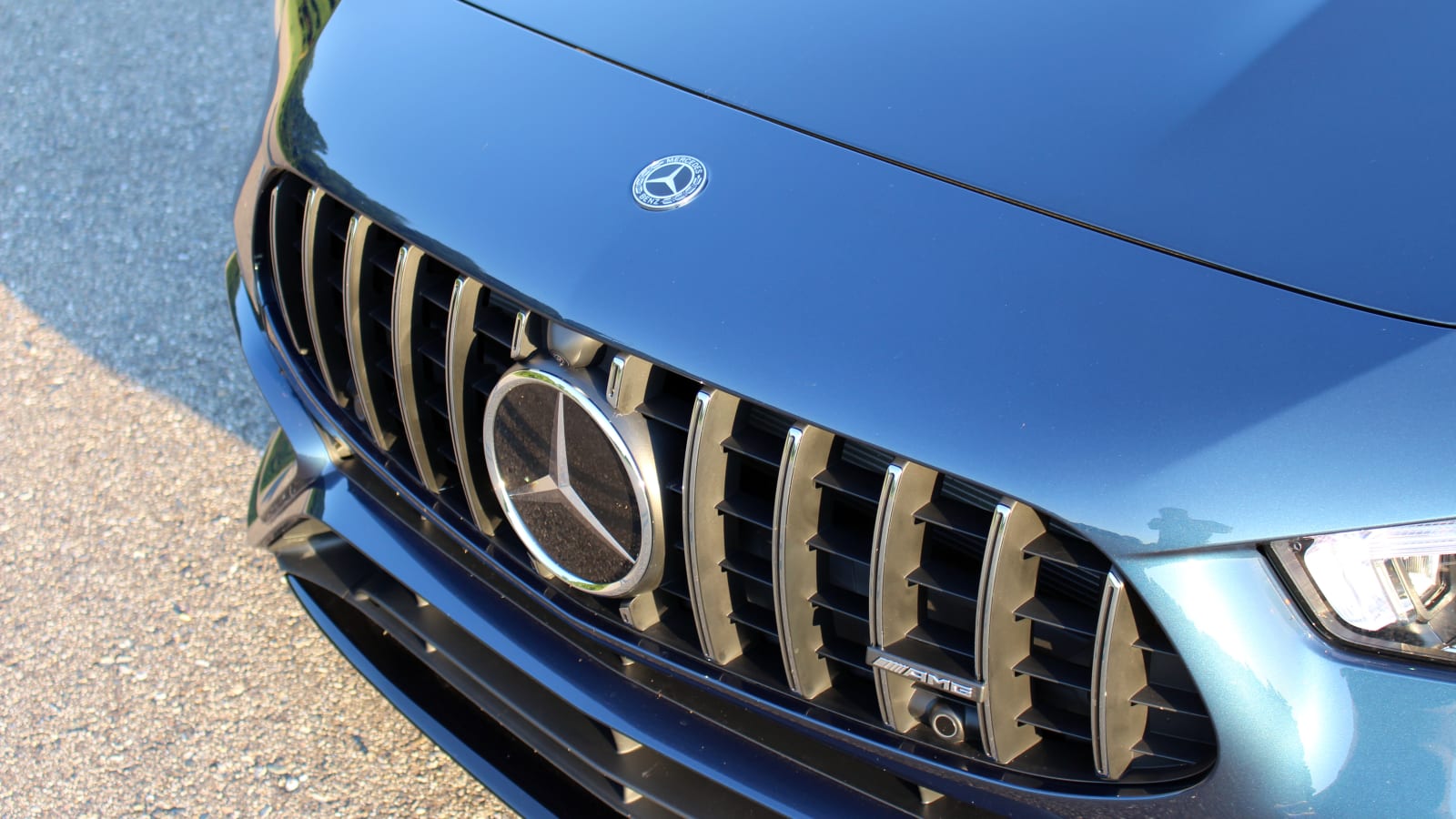 Switch it back into Comfort mode, and while things never entirely quiet down, it’s calm enough for a full-zoot AMG. The $2,690 optional AMG sport seats are super comfortable for the long haul, and offer adjustable bolstering that splays the high bolsters out for a more relaxed feel. Just like the regular CLA, the interior is modern, full of flashy elements and dominated by massive dual screens running the latest MBUX software. There are a few more hard plastic pieces than you'll find in a C-Class, but for the price, the interior is hard to fault. There's certainly no compromise in terms of infotainment or safety tech.

The exterior design is just what you’d expect. It gets the big Panamericana grille reserved for high-caliber AMG models plus wider front fenders to accommodate the wider front axle. There’s only a small lip spoiler in back, but AMG badging, a front splitter, rear diffuser and quad exhaust tips all make it very clear this isn’t your average CLA. You get 18-inch wheels as standard equipment, but the $1,750 19-inch forged AMG wheels on our test car pair perfectly with the red calipers clearly visible within. It’s still a generally droopy looking shape from front to back, but all the AMG bits sharpen it up.

This little firecracker of a sedan has a head-shaking price, though. Before options (and you really do want some of the options), the CLA 45 is $55,795. With the recommended AMG Dynamic Plus Package and Driver Assistance Package, the price quickly reaches deep into the $60,000 range. Our test car goes for $74,830. That's $5,735 more than a base C 63 that comes with twice as many cylinders. To be fair, cars like the Audi RS 3 and BMW M2 Competition are hovering around the CLA 45’s base price, so this is an issue common to this tiny niche of tiny high-powered luxury cars. Among them, then, the answer is definitively M2 if you can live with two doors. But if you can't and getting all-weather prowess and the best tech available are priorities, then the 2020 CLA 45 should fill that tiny niche nicely. 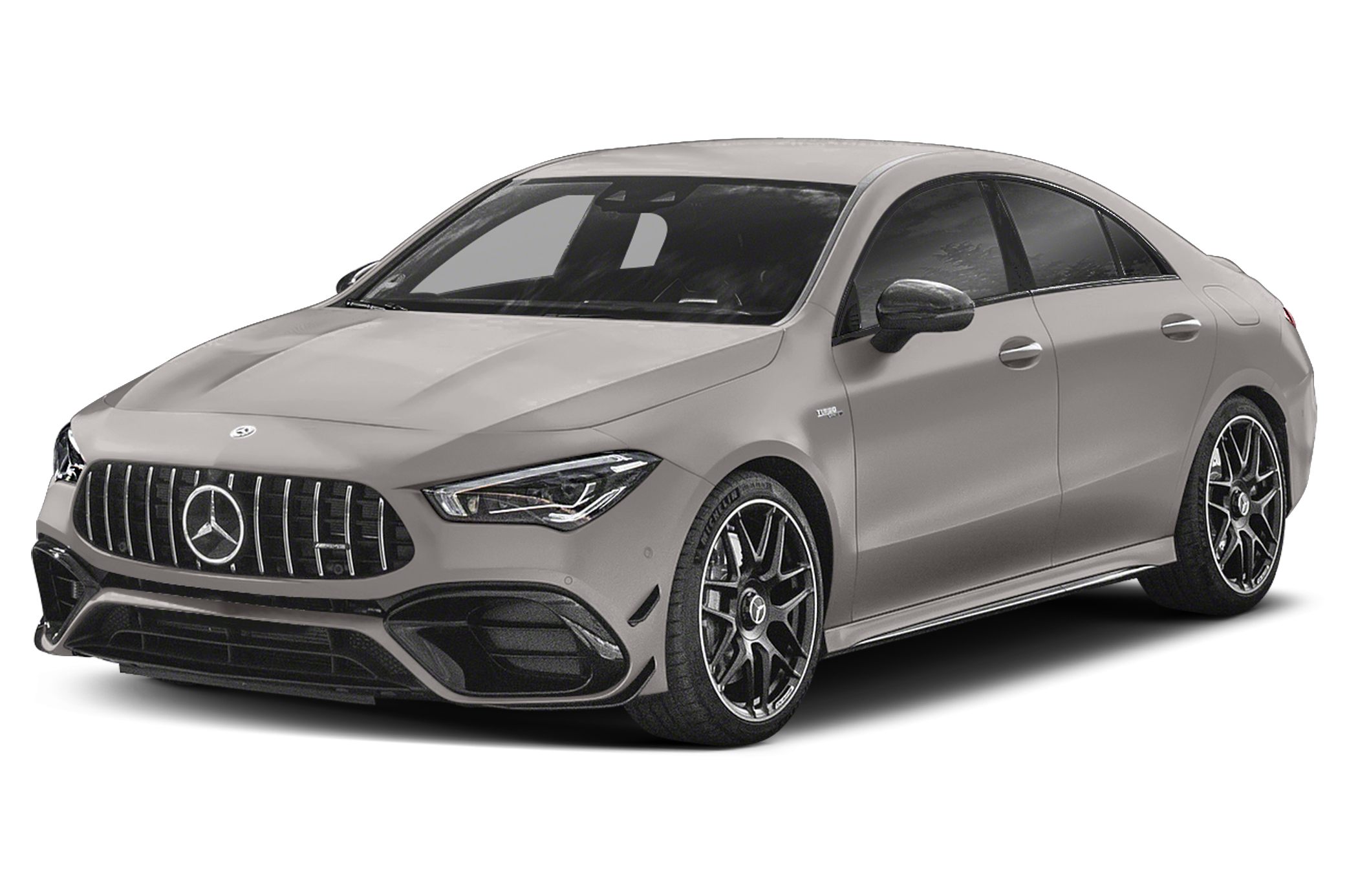 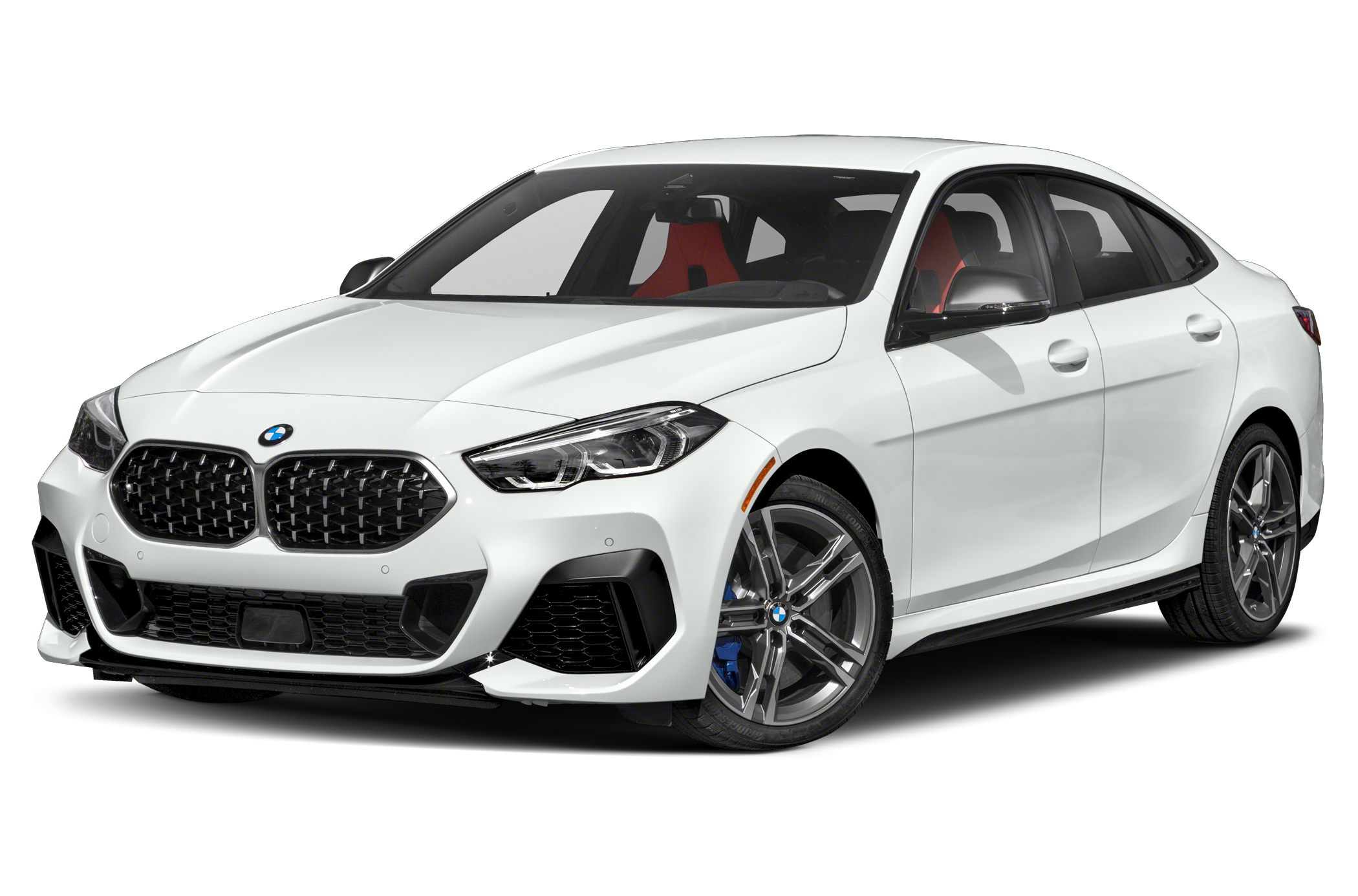 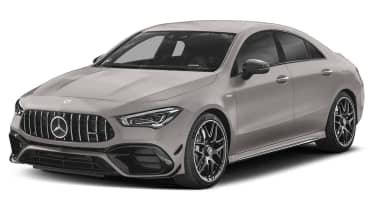 $2,589 - $2,589 Nat'l avg. savings off MSRP
See Local Pricing
I'm not in the market for a vehicle at this time. Please move this suggestion to the side for 30 days.
Huge Savings