The Porsche Cayenne GTS makes its triumphant return for the 2021 model year, slotting back in between the S and Turbo as a driver-focused model that bridges the gap between the more basic variants and the flagship Turbo line.

“GTS” is a nameplate with a bit of history for Porsche, but it was used somewhat sparingly until its revival in the Panamera and Cayenne, and it has since percolated through the rest of Porsche’s lineup. Porsche says it’s the driver’s choice in the Cayenne stable, and that seems fair to us; the first-generation Cayenne GTS was even offered with a manual transmission. This one is auto only, but everywhere you look, Porsche's engineers have once again tweaked settings and tuned components to cater specifically to those who truly expect something with a Porsche badge to evoke a 911 or Cayman.

So, that’s the general gist of 2021 Porsche Cayenne GTS, but what was specifically done for this third-generation model? Well, for starters, the V8 is back. The GTS had a 4.8-liter, naturally aspirated V8 until 2014, when it was unceremoniously dumped in favor of a twin-turbocharged V6. This time around, it gets a Porsche-developed, 4.0-liter twin-turbo V8 producing 453 horsepower and 457 pound-feet of torque, and capable of delivering the GTS from zero to 60 mph in 4.2 seconds. It's effectively a de-tuned variant of the V8 in the Cayenne Turbo, where it delivers an additional 88 horsepower.

Porsche went to great lengths to save weight with this powertrain. Not only is it only negligibly heavier than the twin-turbo V6 it replaces, it’s paired to an eight-speed automatic transmission that has also been lightened for this application. Like the engine, it was lifted from the Turbo model. However, because it doesn’t need to handle as much torque in the GTS, Porsche was able to use lighter internal components, reducing rotating mass. The overall savings? More than 60 pounds. All-in, Porsche says this combo is good for a 0-60 time of between 4.2 (using the built-in launch control feature) and 4.5 seconds. 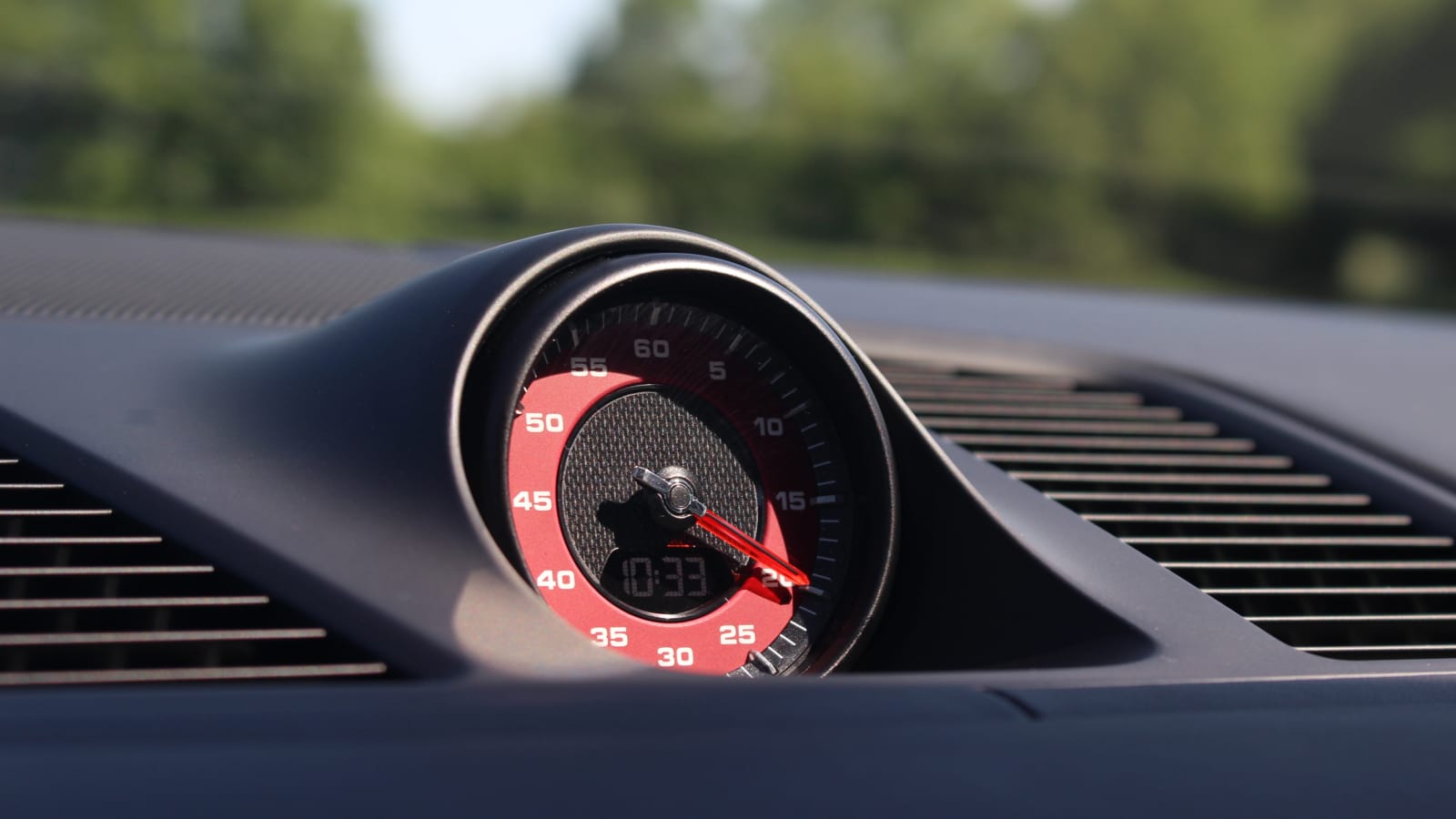 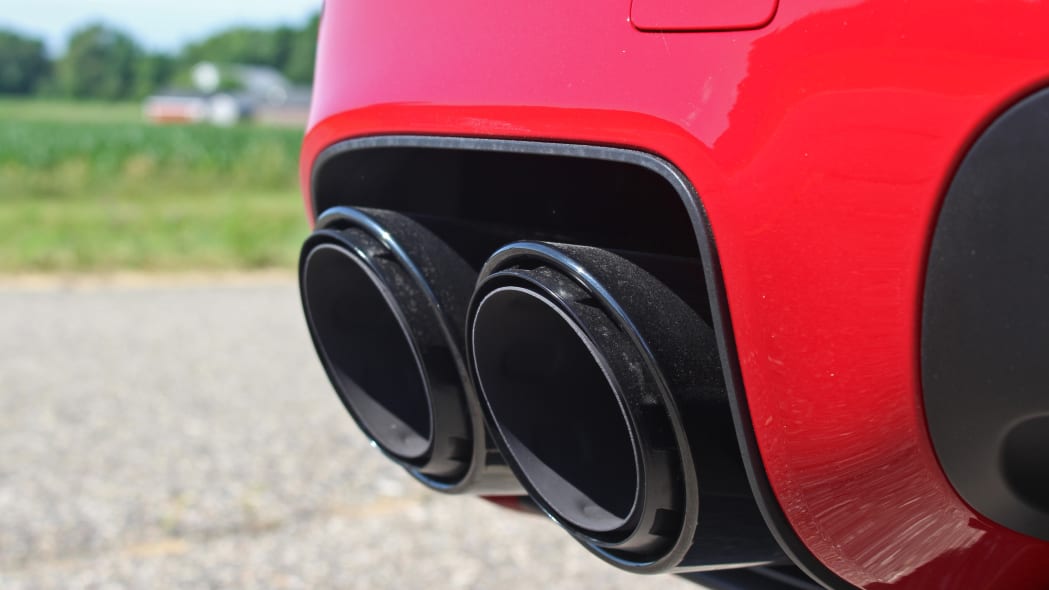 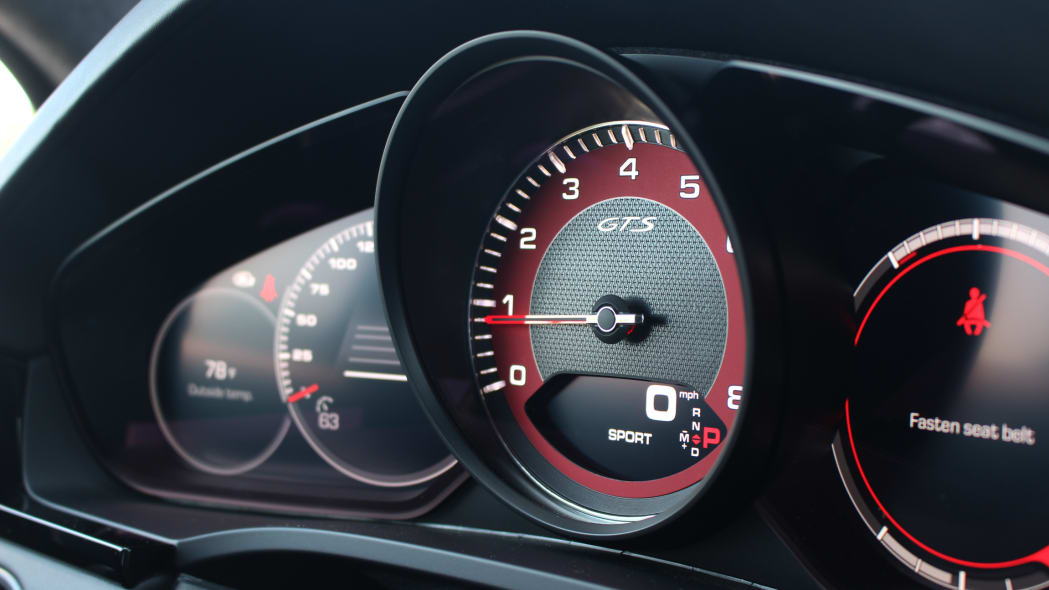 There’s more to the GTS than just an engine upgrade. Torque-vectoring all-wheel drive is standard on the GTS and is calibrated with a 100% rear bias as its default setting. While up to 100% of available torque can be routed to the front axle in extreme situations — such as having both rear wheels on ice — Porsche’s engineers say that the system rarely sends more than 50% to the front under normal circumstances. Since this is a GTS, Porsche’s definition of “normal” means just about anything, up to and including track use. The GTS is also fitted with an electronically controlled limited-slip rear differential.

Here in the States, it also comes standard with Porsche Active Suspension Management (PASM) and an air suspension that sits 30 mm (1.18 inches) lower than a steel-spring Cayenne S — 10 mm (0.39 inches) lower than an S with air suspension. GTS models also get more enthusiast-oriented calibrations for everything from the steering to the suspension and transmission shift logic. “Normal” mode in a GTS is equivalent to “Sport” in other Cayenne models, and that added aggression scales up as you choose sharper modes on the wheel-mounted dial.

Despite Porsche’s efforts to shed weight, the GTS still ends up about 200 pounds heavier than an equivalent S model, and a lot of that is down to items such as the standard air suspension and trick rear differential.

There are ways to counteract that weight gain. The sexy new center-outlet exhaust can only be ordered in combination with the Lightweight Sport package, which shaves about 50 pounds off the curb weight thanks to its carbon fiber roof and some miscellaneous lightweight interior trim, but it will set you back a whopping $10,350. As in the Turbo S E-Hybrid, this package is exclusive to the Coupe. Supposedly, the SUV is meant to at least be capable of doing SUV-like things when called upon, such as towing something, which makes the center-mounted exhaust a no-go. The more lifestyle-oriented Coupe is a different story. 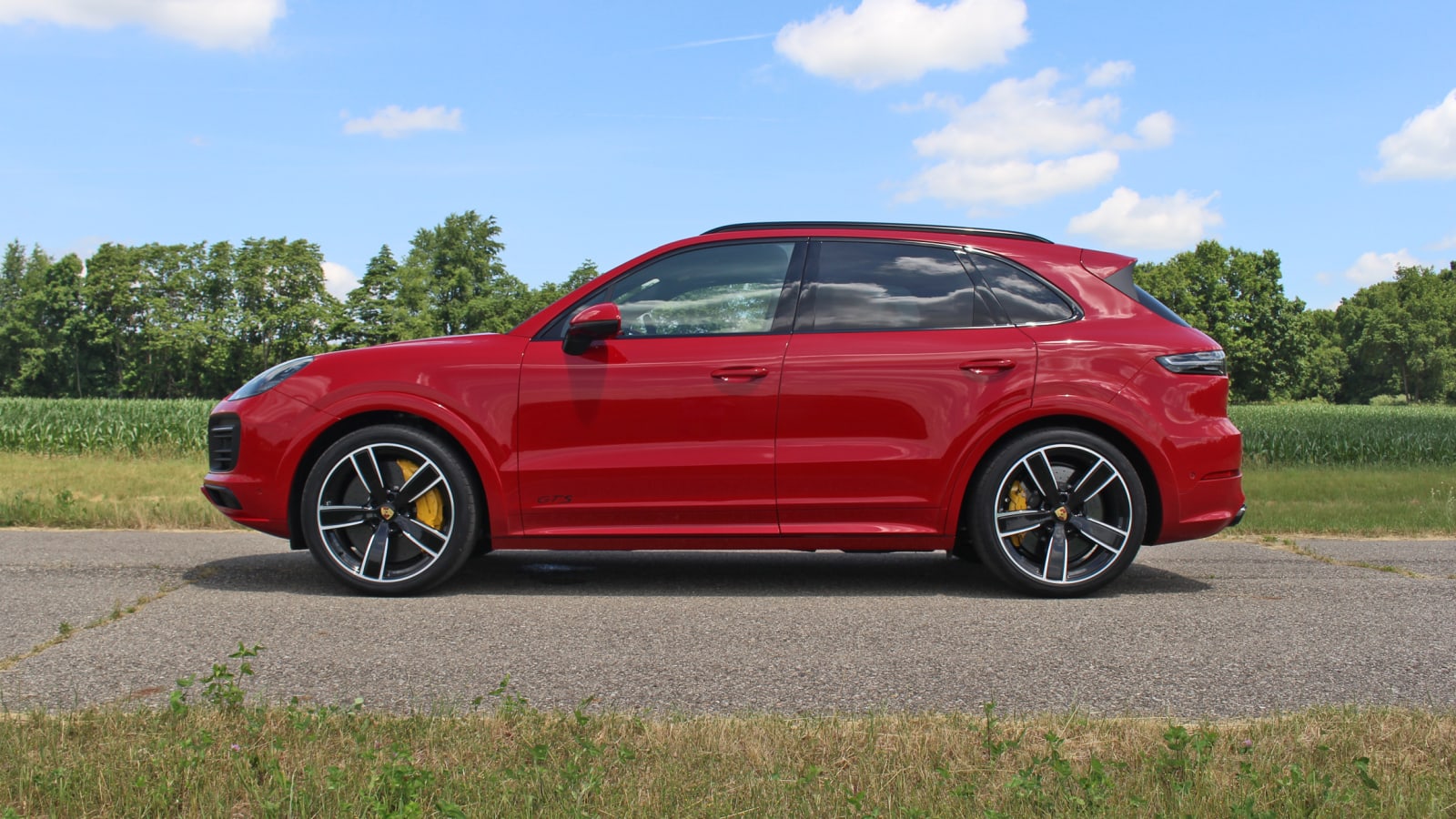 Both models are rated for 7,700 pounds of trailering capacity, but if you check the box for the Lightweight package on the Coupe, you can’t spec the factory tow hitch. We doubt many potential buyers will be disappointed by that.

That center-outlet exhaust is more than just a pretty set of tips. It has a completely different design behind the bumper, and a correspondingly unique, higher-pitched note. It will be made available on all V8-powered Cayenne Coupe models (GTS, Turbo and Turbo S E-Hybrid) in the U.S. market over the course of the next two model years.

Porsche arranged for me to get my hands on a European-spec 2021 Cayenne GTS SUV (as in not the Coupe) for a day so that I could put it through its paces. Despite a staggering list of selected options, the car featured only equipment that will be available in the U.S. market, including carbon-ceramic (PCCB) brakes, rear-axle steering, Porsche Dynamic Chassis Control, “InnoDrive” adaptive cruise control with lane-keeping assist, 18-way adaptive sport seats with memory, and Burmester premium audio. Total price: $167,070 (including $1,350 for destination), up from a base price of $108,650.

A couple months back, I had the opportunity to drive the Cayenne S Coupe here at home, and while the Lava Orange finish and sleek rear-end styling make it quite the eye-opener, it still drives like a luxurious SUV. The body motions are controlled, but quite apparent. It feels composed, but not buttoned down; quick enough, but not fast. 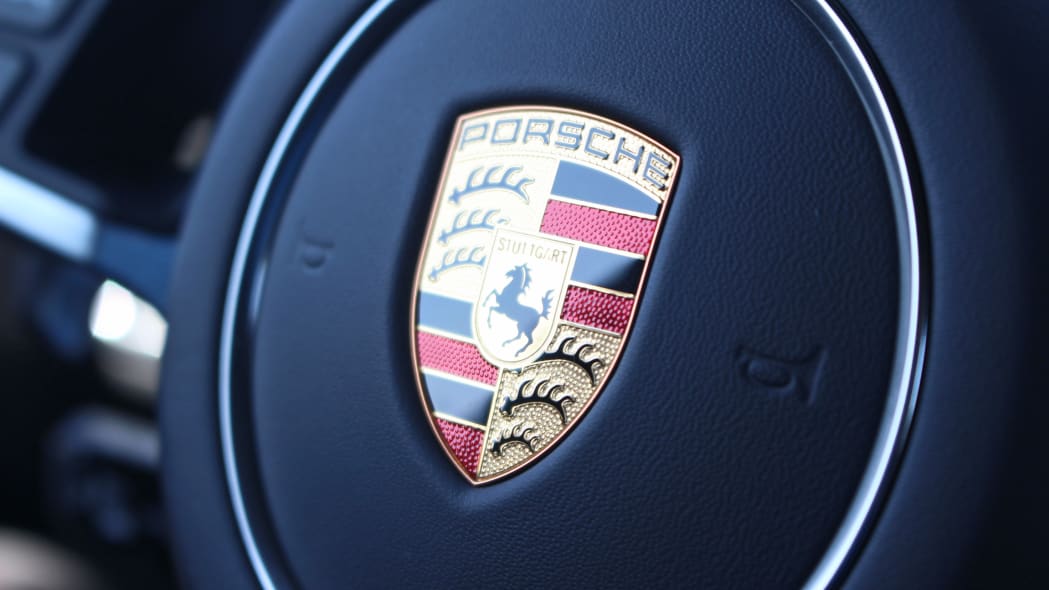 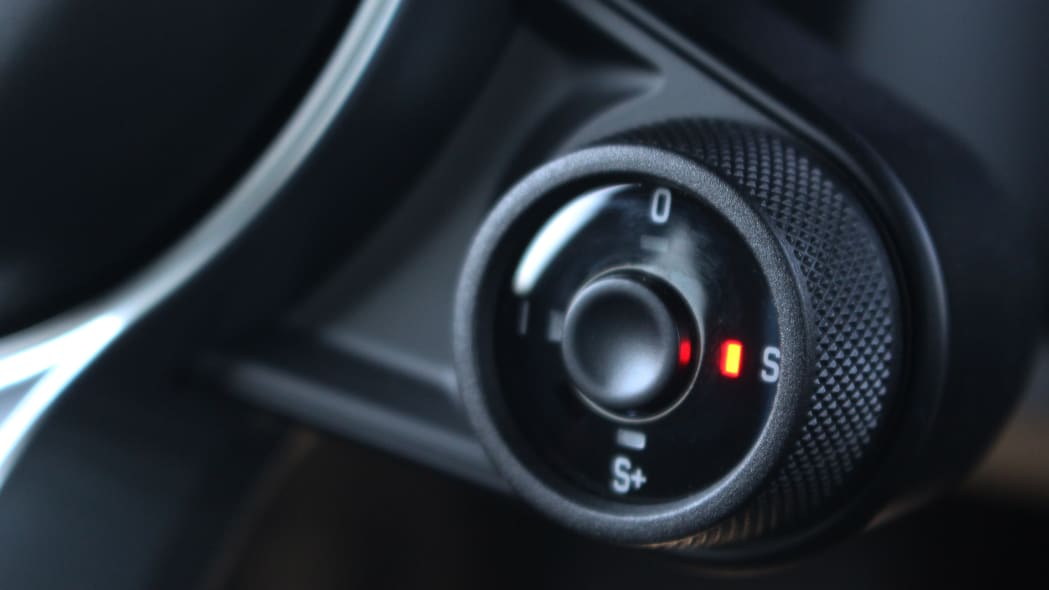 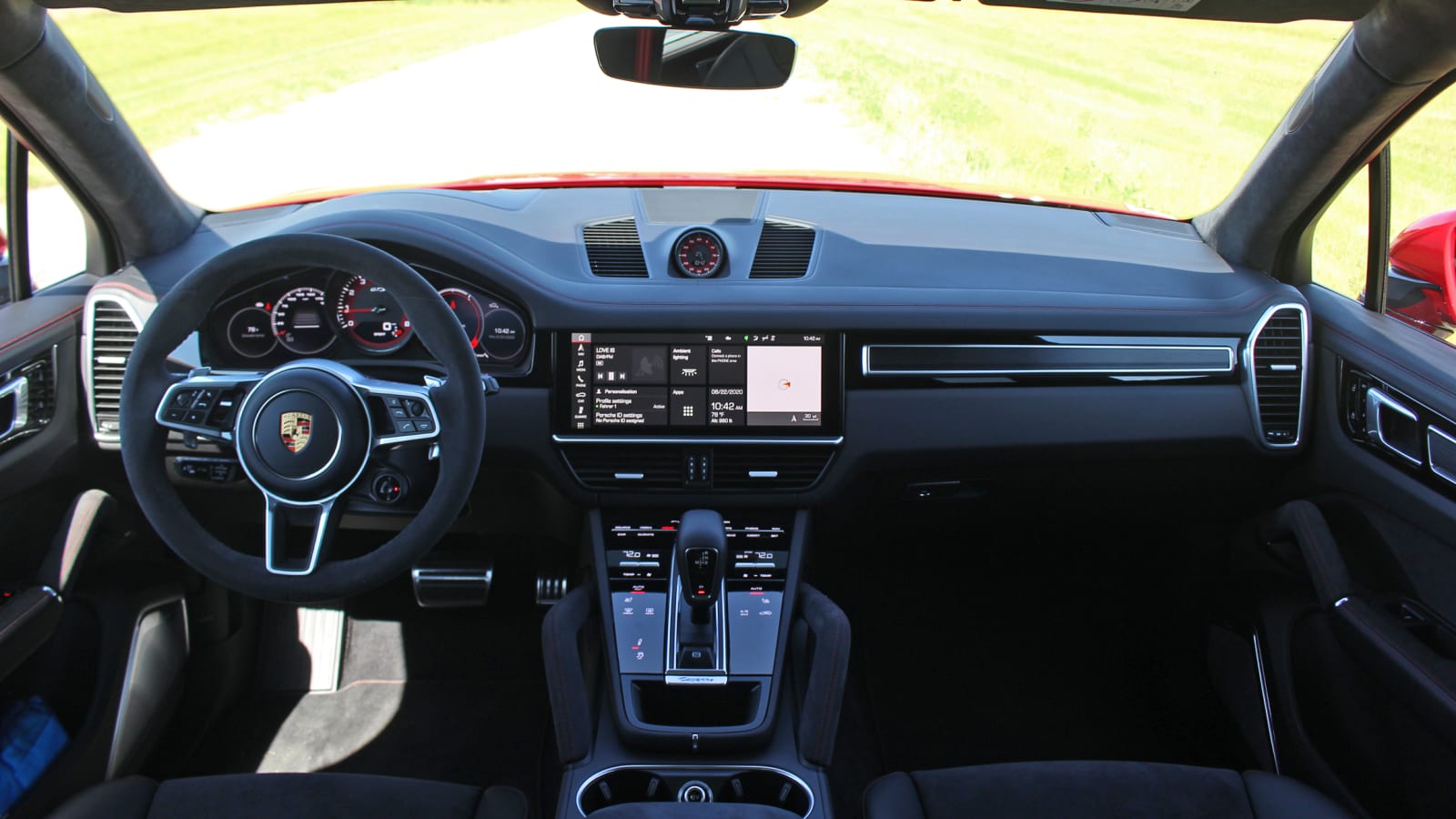 Despite a mere 19-horsepower advantage, the GTS has an entirely different character. Part of that is thanks to the far more significant torque gulf (52 lb-ft) between the two. Even in “Normal” mode, which is frankly still rather tame, the GTS bites harder and more deliberately off the line, steaming ahead with the sort of grunt you expect from a V8.

In the corners, it’s even more night-and-day. Part of this is down to the fact that the Cayenne S Coupe I sampled was equipped with the standard steel suspension, rather than the air suspension found on the GTS. The lower center of mass and more-versatile active air suspension give the GTS a serious edge here.

The GTS is nearly 230 pounds heavier than the S Coupe on paper, but in the real world you’d never know it. The more-composed and planted ride of the GTS makes it feel almost sedan-like despite its height and near-5,000-pound heft. Overwhelming these Yokohama Advan Sport V105 max-performance summer tires takes serious effort. And the PCCBs? Well, they could probably stop time itself if paired with the right set of tires.

So, the GTS is better. But is it $20,000 better than a Cayenne S? Yes, even with the caveat that you could throw a few options at the S to get its ride and handling to better match that of its pricier sibling’s. The fact of the matter is that an S model with all of the GTS chassis goodies is still lacking one key thing: that sweet little V8. 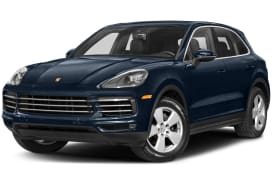 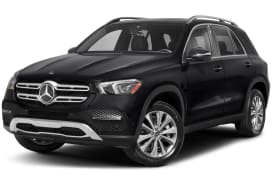