Bentley promises performance, but it’s the craftsmanship that stands out

After reading Brett Berk’s First Drive review of the Bentley Flying Spur, I was intrigued. Not by the author’s propensity for shedding clothing (though that sure is … something), but by some of the car’s numbers and its drivetrain features. Figures such as 626 horsepower and 3.7 seconds to 60 piqued my interest, as did torque-vectoring all-wheel drive and four-wheel steering. Bentley says the Flying Spur offers “breathtaking performance.”

Berk’s first drive was in Monaco, where a car like this pairs well with the luxury yachts. My time with the Flying Spur would be much less of a pantsless extravaganza. Instead, I’d be fleeing quarantine cabin fever with my family, schlepping through the rain to run errands, waving to confused-looking neighbors and hopefully experiencing performance that would, as advertised, take my breath away.

The Flying Spur feels a bit like a boat. It’s big, with a long hood stretching out into one’s forward view like the bow of a cabin cruiser. Add the isolated feeling provided by the suspension, and I could easily imagine myself skimming across a calm bay. The materials lend themselves to the nautical whimsy as well, with plenty of quilted leather and horizontal swaths of metal-accented wood that reminded me of my uncle’s Lake Erie runabout. 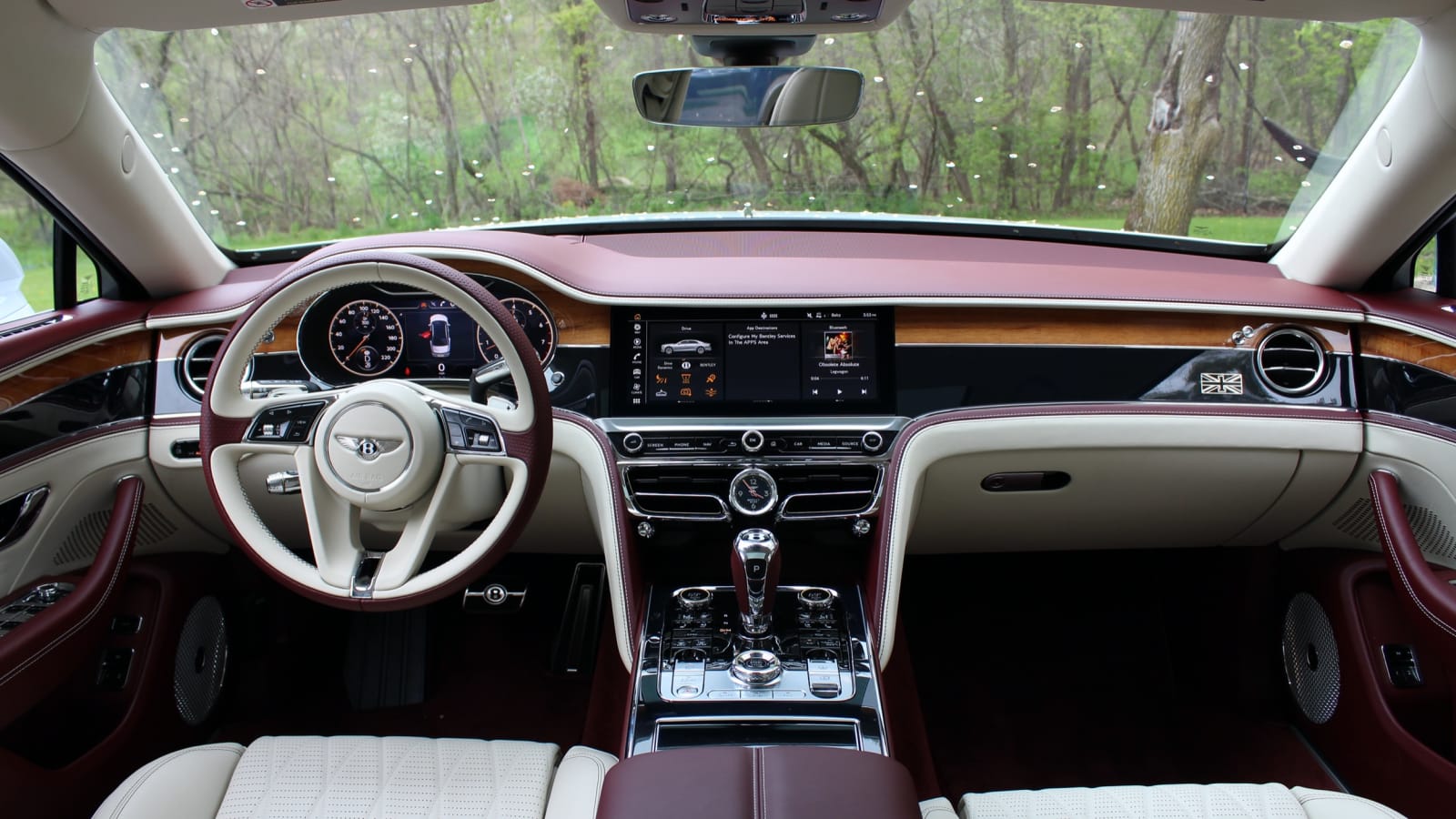 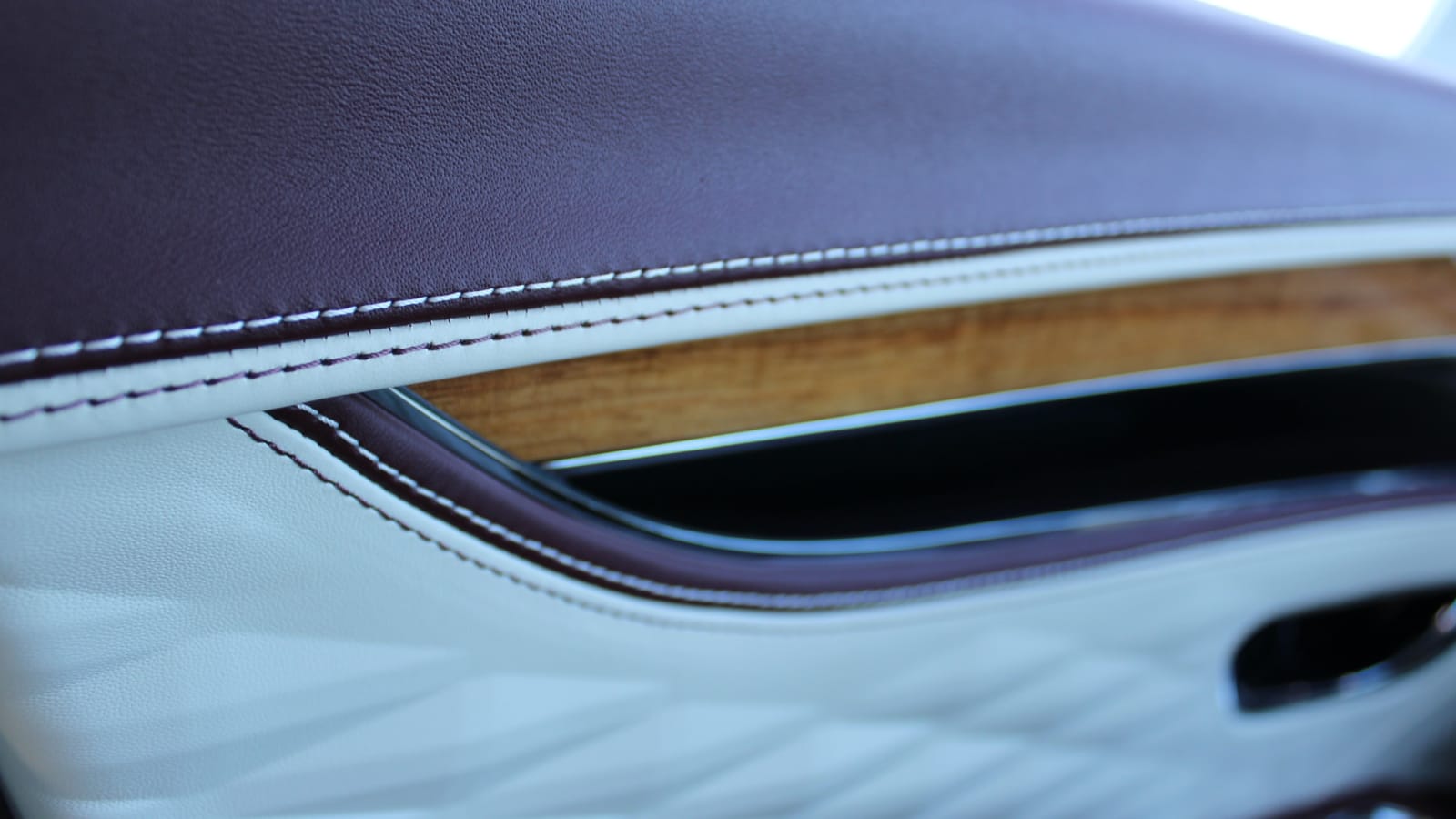 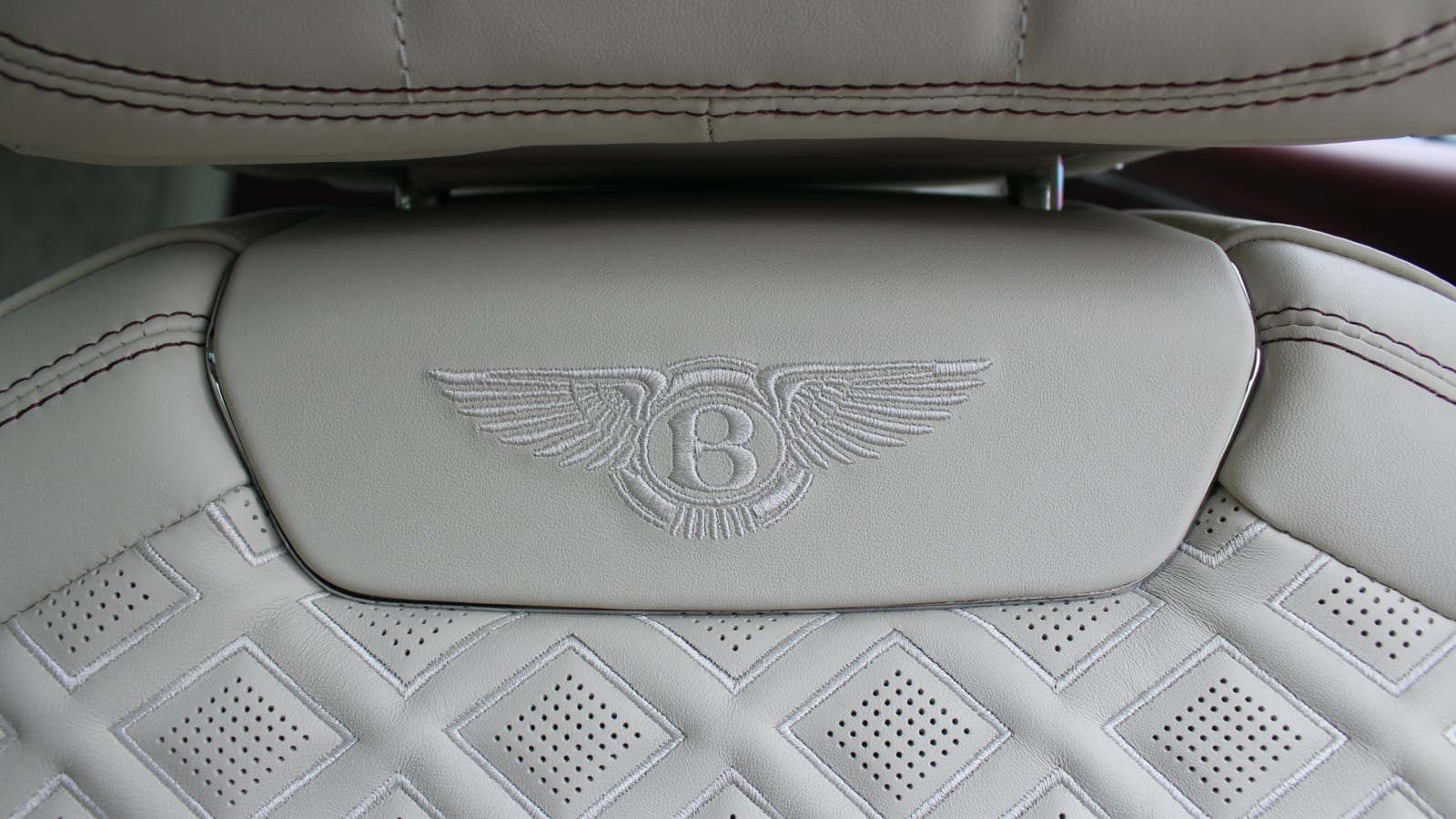 My first outing was with the family, and it was mostly spent on the highway. My wife, Cat, who is prone to motion sickness, had no troubles in the Flying Spur. Apart from sneaking in a few hard launches — eliciting chuckles from Cat and admonishment from my son, Wollie — I kept my driving sane and smooth. I mostly kept the car in Comfort mode.

Driven as such, even with the brief moments of right-foot indulgence, the Flying Spur felt a bit underwhelming. The car’s size suggests the existence of the 6.0-liter W12 under the hood, but its 626 horsepower and 664 pound-feet of torque are experienced differently in this Bentley. Hardly any sound makes its way into the cabin. Its highway calmness belies its actual swiftness. This was all well and good for the comfort of my passengers, but it didn’t do much to evoke any feeling beyond that of leisure.

In fact, I’d have almost rather have been a passenger for this sort of trip. That way I could better soak in the craftsmanship that surrounds you inside a Bentley. This is where this car’s price, which starts at $217,375 (including a Bentley-sized $2,725 destination charge) and climbed to near $280,000 in our test car, begins to feel justified. The leather throughout is flawless, smooth and taut, molded perfectly to the precisely sculpted forms it covers. The way the beautifully grained wood veneers butt up seamlessly against metal or leather is all the more impressive with increased scrutiny. The quilted stitch pattern is repeated in the forms on the door panels and the textured switchgear (as well as in the exterior lighting elements, the grille mesh, and on and on). The dye of the leather has a depth and uniformity that makes it attractive even in a color palate I wouldn’t normally enjoy. The more one looks, or feels, or even smells, the more appreciation one garners for the mastery with which the Flying Spur is constructed.

Later in the week, I could drive without concern for passenger comfort. As soon as I got onto the road, though, we got a soaking rain that wouldn’t let up for days. No worries, this boat was fine in the wet. I was surprised by the massive amounts of grip on offer. The 22-inch Pirelli P-Zero all-season tires seemed to have no trouble finding purchase on the pavement, and the car felt just about as comfortable at highway speeds as it did when the roads were dry. I had expected a bit more drama, but, in this case, I was glad there still was none. 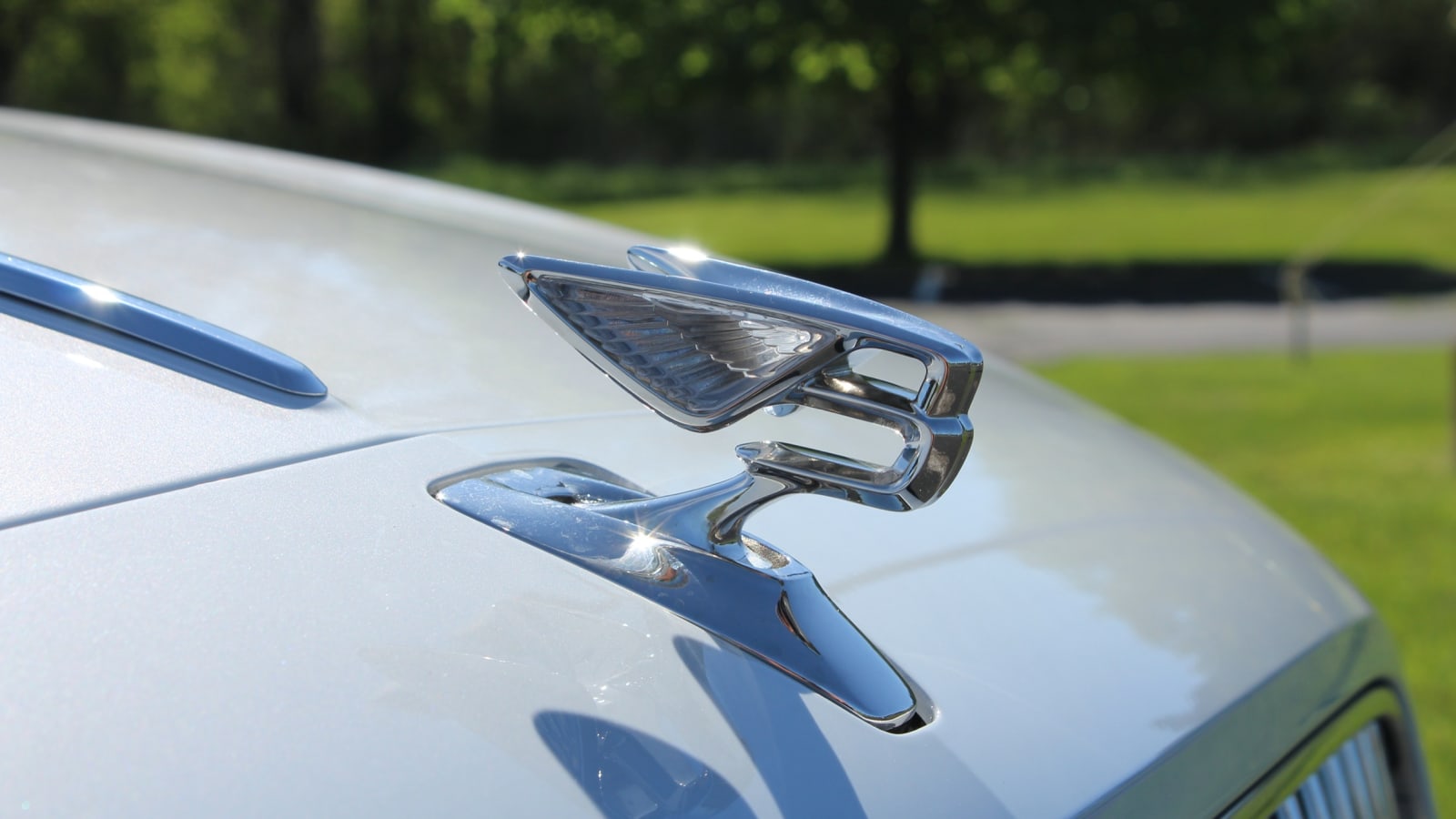 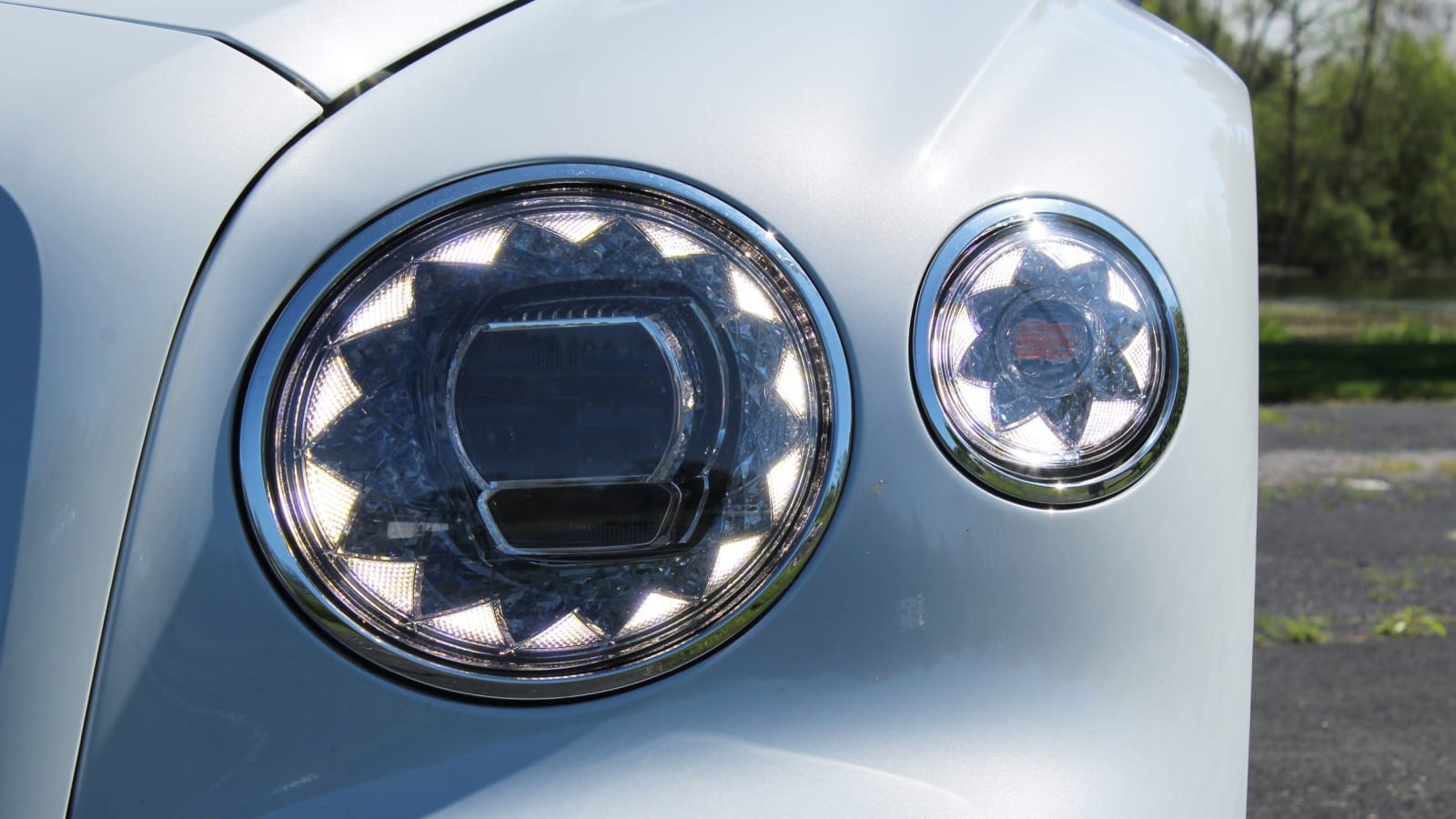 Finally, on my last day with the Flying Spur, the rain relented, and the sun came out. My initial misgivings about this big Bentley’s entertainment promises began to evaporate along with any remaining puddles as I spent more time on two-lane back roads. Hard acceleration was quiet, and it still felt a lot slower than what the speedometer read. In Sport mode, which unleashes more of the exhaust note and leaves the tach needle higher in the rev range, there’s a little more sound to enjoy, with the engine and exhaust noise coming into the cabin a few decibels short of a snarl.

When I found some open curves, the Bentley was able to show off its more playful side. Despite its size and its heft — the Flying Spur weighs in at more than 5,300 pounds— it’s surprisingly nimble. Again, there’s that aforementioned grip. Also, four-wheel steering makes the car react quickly but without drama to sharp inputs, whether you’re heaving it through a tight curve, changing lanes or navigating a parking lot. It can dive into a corner with the confidence of an Olympic swimmer and follow the line out without breaking a sweat. I was impressed by the way the Flying Spur could throw its bulk around so easily, but still it was the smell of the leather and the view of the big hood in front of me that evoked more emotion than the ultra-composed driving dynamics.

The drive is more involving when you use the paddle shifters. It doesn’t make the car louder or faster, but the more direct engagement with the powertrain brings the sound and the feel into sensual focus. It didn’t take long, though, before I returned to the notion that the car should be doing the work for me, and I put it back into automatic mode — and turned on the seat massage for maximum pampering. 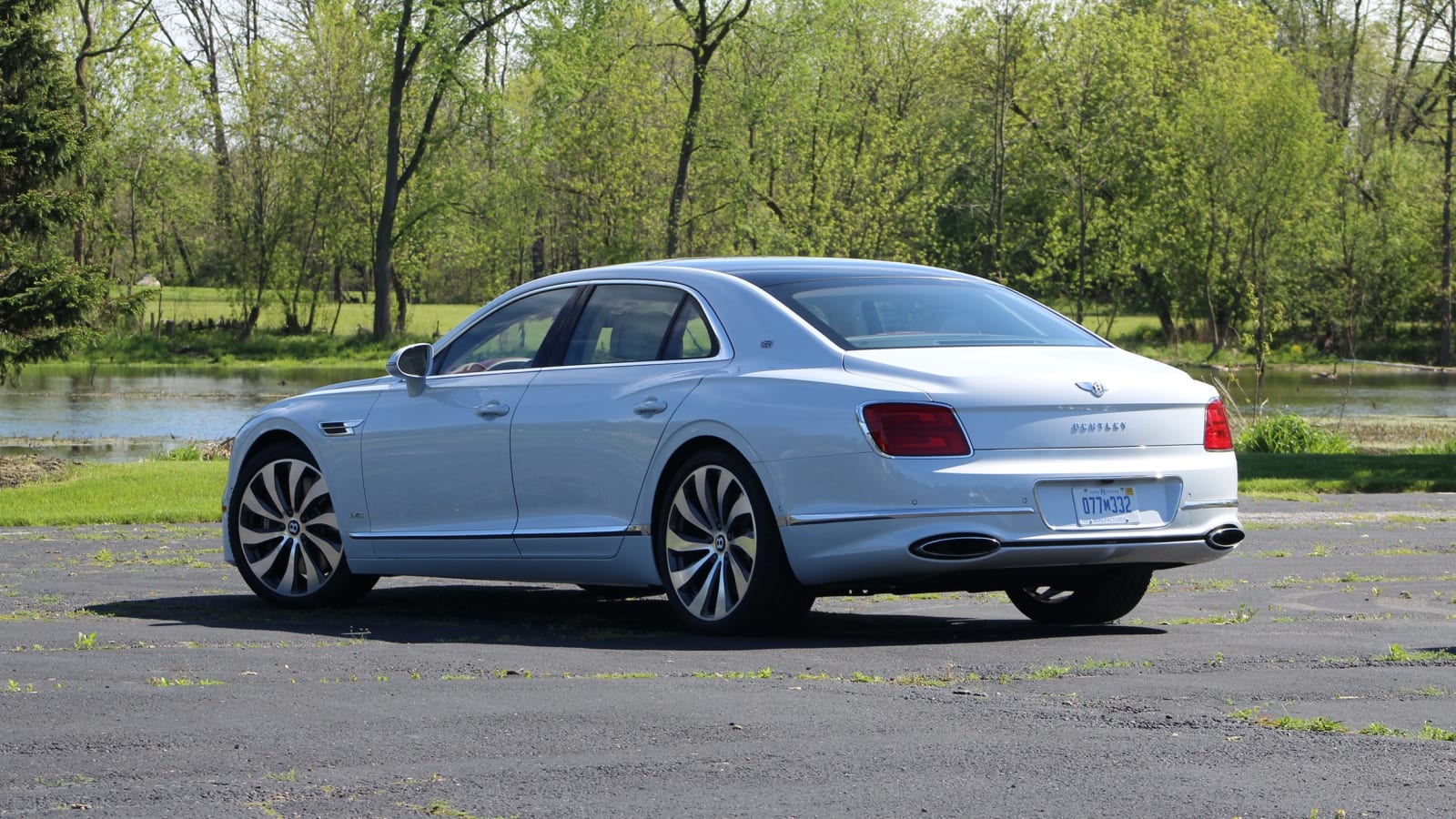 Yes, the Bentley Flying Spur does have the ability to engage a driver. That engagement takes a lot of coaxing, though, and provides little reward. That comes down to the type of car this is — a luxury cruiser. There are other ways I’d spend my $280,000 automotive dollars. I can get 80% of that feeling of specialness and attention to detail in a Lexus LS, and certainly more tech in a Mercedes-Benz S-Class.

If I already had a fine driver’s car or three sitting in my garage-mahal, and I needed something a bit more rarified that could make a splash in comfort and style, I’d absolutely add the Flying Spur to my collection, but it wouldn’t be my go-to for excitement (too civilized) or daily duties (too big). The Flying Spur is excellent, however, if you want to turn heads or pamper passengers — whether or not they’re wearing pants.