Initial plans place charging stations every 50 miles along I-5

Last year, a consortium of nine electric utilities and two agencies representing more than 24 municipal utilities across California, Oregon and Washington state commissioned a study to examine a West Coast EV charging corridor. What's unexpected about the effort is that it's aimed at medium- and heavy-duty trucks — the diesel-powered prime movers that ply the 1,380 miles of Interstate 5 from border to border: San Ysidro, California, to Blaine, Washington. The consortium published its final, 185-page report for the West Coast Clean Transit Corridor Initiative last week. The first phase calls for 27 charging stations for medium-duty vehicles like vans and box trucks by 2025. Each station would be set every 50 miles along I-5, located ideally no more than one mile from the highway. After 2025, 14 of those locations would be built out to serve heavy-duty, Class 8 tractor-trailers by 2030.

At the moment, 16 of the 27 proposed charger locations are in California, at least five are in Oregon, and six are in Washington. While building the infrastructure along I-5, the plan also calls for installing 41 charging stations about every 50 miles on the east-west highways that feed I-5: California's I-8, I-10, and I-80, Highway Routes 210 and 710, and State Routes 60 and 99; Oregon's I-84; and Washington's I-90. 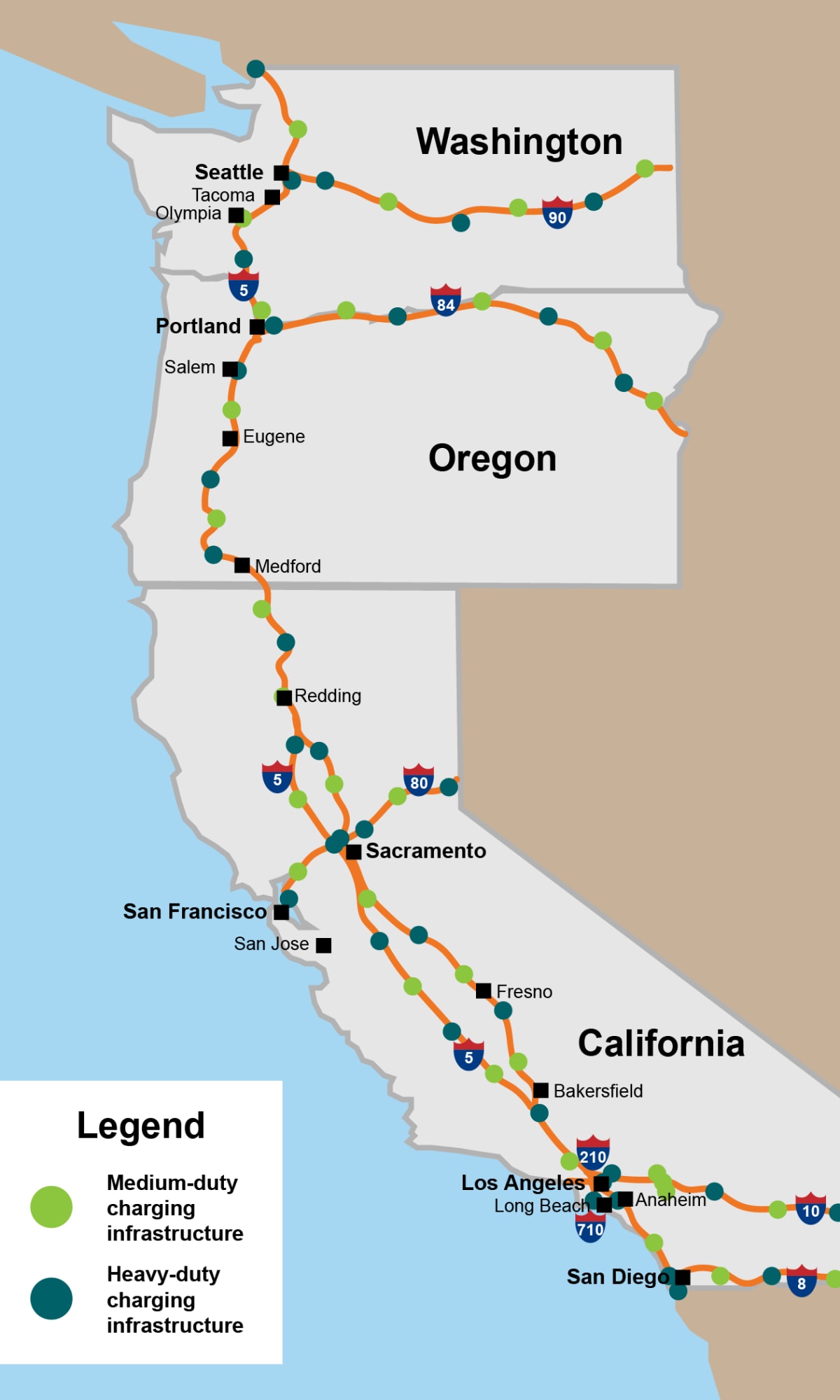 There's a ton of work to do between the ink drying in the report and plugging in a Peterbilt outside Lido. To start with, the study found that urban areas already possess the utility infrastructure to hook up medium-duty EV chargers, but rural areas need a lot more investment in capacity, and the total cost of the project is estimated at $850 million.

Several important issues support the work getting done, though. In California, the transportation sector creates more than 80% of the state's air pollution and more than 40% of its greenhouse gases, with Washington and Oregon posting similar percentages. The report cites data that "people who live near truck-traffic corridors experience higher rates of asthma, lung and heart disease and chronic bronchitis due largely to breathing vehicle emissions, specifically diesel particulate matter," and more recently, "increases in particulate pollution [are] associated with higher death rates among COVID-19 patients."

The California Air Resources Board issued another set of draft guidelines to provide a standard for electric trucks earlier this year, and the state has long-term emissions goals that will require zero-emissions freight haulers. As part of the study, which looked at the zero-emission medium- and heavy-duty truck market and forecasts, freight companies responded that "access to public charging would accelerate deployment of electric vehicles because their trucks could use public sites to support their operations."

The next steps in the initiative are detailed site evaluations, and working with the utilities in all three states to figure out the best way forward.