It sounds much more like an Italian supercar than a muscular, American V8

Everything points to this being a C8 Corvette Z06 test mule. The sound from the video is the real kicker. It's already been reported that the 5.5-liter flat-plane-crank V8 engine from the C8 racecar will find its way into a production C8 in one form, and this sure sounds like it. Instead of a low, rumbling V8, the Corvette sounds like an exotic supercar from Italy, winding up into the upper rev ranges. To say we’re excited would be an understatement.

The rest of the things we see in these photos also point to this heavily camouflaged car being a Z06. Most obvious would be the company it’s keeping. GM engineers appear to be out in a convoy doing some road testing with the competition. Our spy photographers saw both a Ferrari 458 and a Porsche 911 GT2 RS. Additionally, a previous rumormill piece pointed to the Z06 adopting a center-exit exhaust, and that’s exactly what we see here. The standard Stingray features a quad exhaust with dual tips at each corner. Close-up shots show four tips exiting from the center in total, but this unfinished test piece is not representative of what the production exhaust exit will look like. Regardless, it’s a strong indicator that there’s something new sitting amidships. 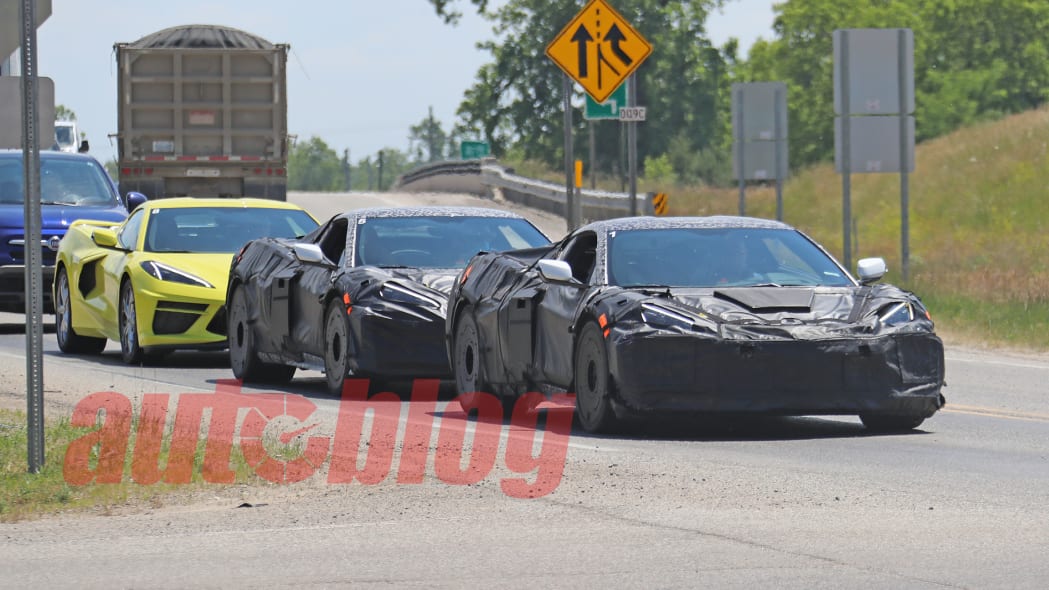 As we move onto the wheel and tire package, GM appears to be hiding something here, because wheels aren’t typically covered up on test cars. Maybe engineers saw the carbon fiber wheels on the GT350R and decided those were cool? It’s only a guess for now, but putting carbon fiber wheels on the Z06 would be a nice treat. A staggered tire setup is also visible to the eye, but we can’t make out the exact tire sizes. The report that suggested the center-exit exhaust predicted 345-section-width rubber in back and 275-section-width tires in front. They do appear to be Michelin tires, though, and the tread pattern and sidewall design indicate they’re the mega-aggressive Pilot Sport Cup 2 tires. Prepare for the grip.

Besides that, these cars appear to be well and truly covered up in camouflage to keep their secrets. The front fascia is completely masked off, and the rear of the car just looks like a crudely modified Stingray rear end, rather than an official Z06 bumper.