Low but not slow, Icon’s latest Derelict build is still crusty in all the right places

We haven’t checked with the Guinness Book or anything, but we’re pretty sure we’ve just executed the longest smoky burnout ever by a 1949 Hudson Commodore. About 200 feet of violence, smoke billowing from the skirted rear quarter panels, its supercharged LS9 V8 pulverizing the 18-inch rear tires.

At the next stoplight, we expect the older gentleman in the SUV beside us to scold our antics, but the opposite takes place. He’s clearly taken by Icon’s latest Derelict build. “That’s the car I had in high school,” he yells over. “It’s a ’49 Hudson, right?”

“That’s right,” we yell back over the rumble of its blown V8. “Beautiful,” he says with a smile. “I met my wife in that car.  She’s the only thing I ever loved more than that car.”

The man’s words are heartfelt, and the exchange is exactly what Icon’s Derelict builds are all about, timeless classics still wearing a lifetime of patina that emotes their stories and compels others to tell theirs. “We leave the romantic and irreplaceable wabi-sabi finish on the exterior that only decades can create with honesty,” the company’s website explains.

Underneath their faded finishes, however, Derelicts are completely reengineered. The restomods are fitted with modern drivetrains and other up-to-date mechanicals so they can be driven and enjoyed every day, tires be damned. 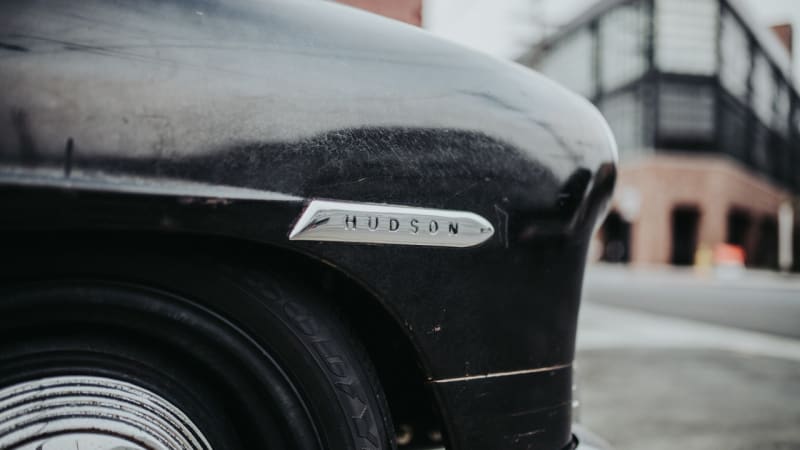 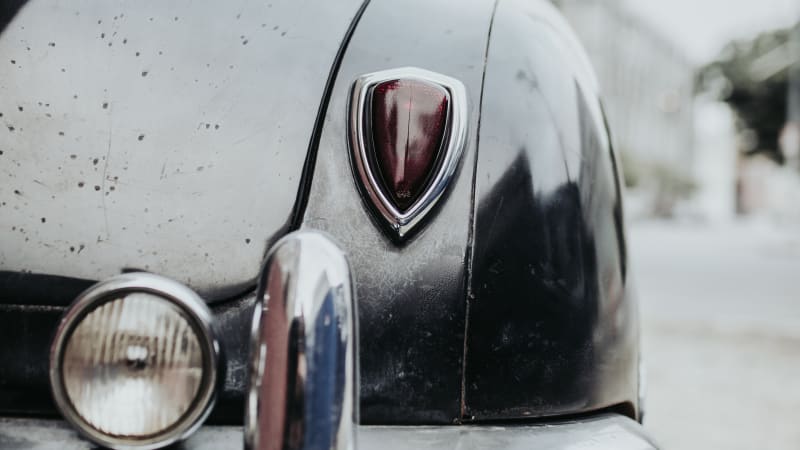 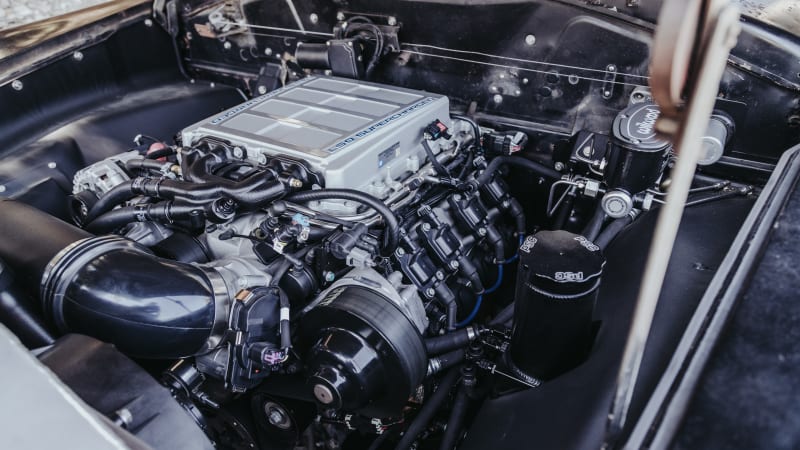 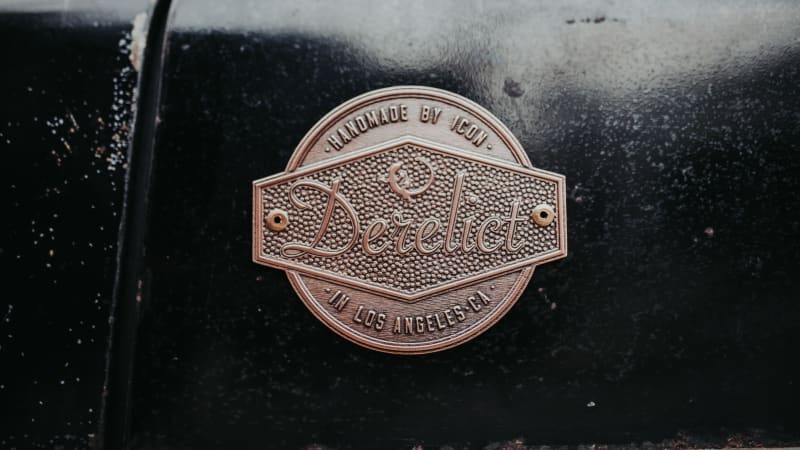 Icon is best known for its big-money first-gen Broncos, but its portfolio is quite diverse, ranging from full custom builds to its restomodded Toyota FJ and 1950’s Chevrolet pickup lines. Walking through its 75,000-square-foot facility in Chatsworth, California, we see a little bit of everything, including a Hellcat-powered 1970 Plymouth Superbird waiting for carbon-fiber body panels and a reengineered two-door Jeep Cherokee that’s getting a prerunner-style suspension and a front clip from an early Gladiator pickup.

Any car or truck can become an Icon Derelict. So far, the company has constructed 20, including several from the 1940s. It’s Tesla-powered electric 1949 Mercury coupe is its most radical, but the list also includes a 600-hp 1946 Oldsmobile and a 1948 Buick Super convertible. “I don’t want to be pigeonholed as the 4x4 guy,” says Jonathan Ward, Icon’s founder and chief designer. “I like it when we build cars.”

When Ward found this 1949 Hudson Commodore on Craigslist about four years ago he didn’t know what it would become, he just wanted it. It was all original and all there, sitting in a North Carolina barn. “I just knew I had to build it,” he says. “It’s arguably one of the most innovative shapes of its time. They have such a wild low roofline and sweeping grace to them, which was allowed because of a unique construction technique, at least back then, called unibody, which gave them an extremely low floor height and allowed for its radical body shape.”

Introduced in 1948, the Hudson was one of America’s first post-WWII automotive designs. The body style, with its long hood and slap sides, would last until 1954. It was renamed the Hornet in 1951, the same year Hudson officially entered NASCAR competition. The company also began to offer its flathead inline-six with two one-barrel carburetors, a setup it called Twin H-Power.

With their unibody construction, wide stance and low center of gravity they were the cars to beat in their day. Driven by such legends as Marshal Teaque and Tim and Fonty Flock, the “Fabulous Hudson Hornets” won on the beaches of Daytona and more than 100 other races between 1951 and 1953. But Icon’s Hudson will surely remind younger enthusiasts of Doc Hudson from the movie Cars, the character voiced by film icon Paul Newman. 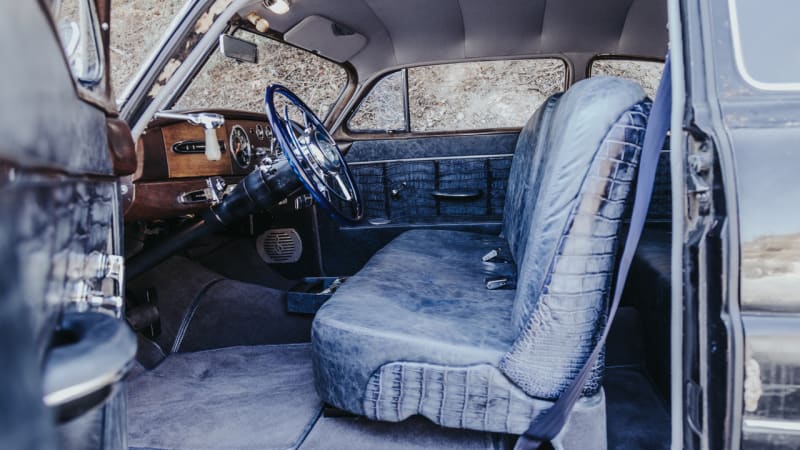 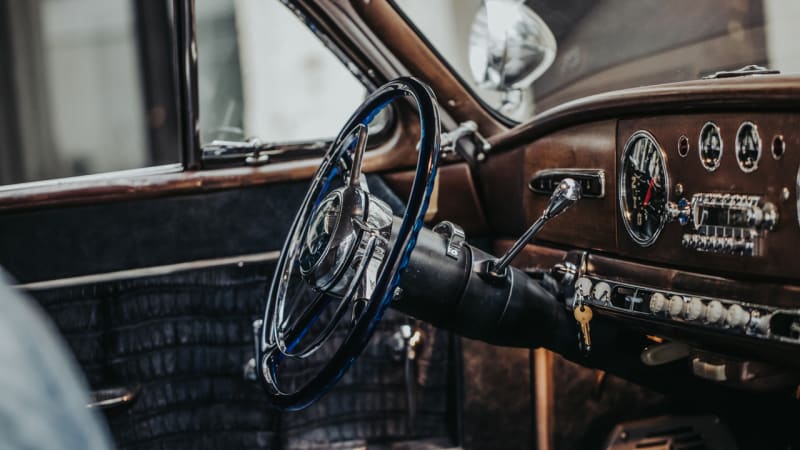 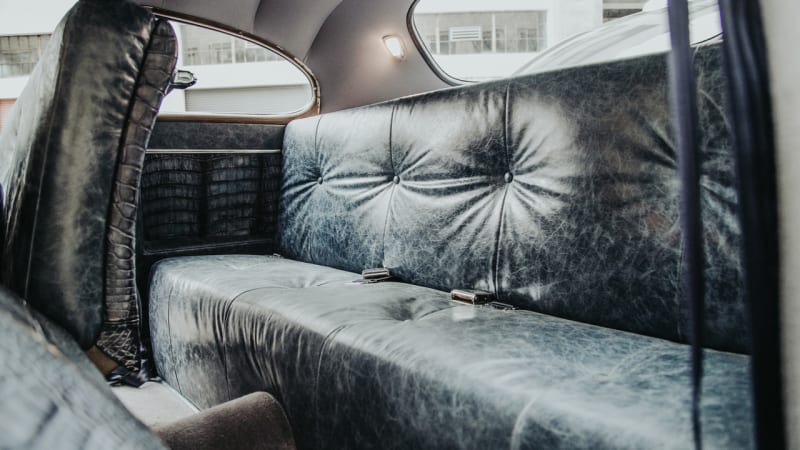 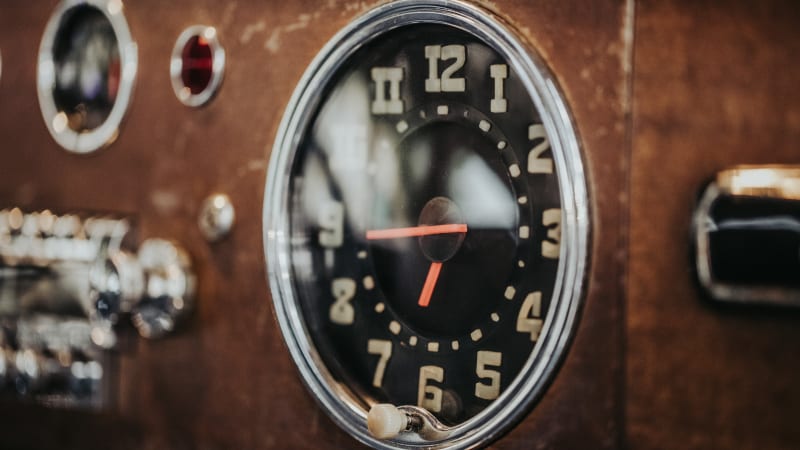 About 40 percent of the Icon’s clients are repeat customers, and the owner of the Hudson has two others, both FJs. He wanted this one for his ranch near Nashville, which explains the rockabilly theme to its interior, which includes hand-dyed alligator and speaker grilles cast with music symbols.

The three-year build consumed more than 3000 man-hours and was completed in time for the car to be displayed at The Quail in 2019 as well as the SEMA show. “The alligator skins start white,” says Ward. “I hand-painted it all myself with brushes and sponges. That alone took about 50 hours. I had some material left over so I also made the owner a hand-stitched alligator flask and wallet to match.”

Its flat factory bench seat remains, but its springs have been replaced with firm memory foam, which still needs to break in. Ward also left the stock factory gauge cluster, worn wood trim and AM radio face, but everything has been rebuilt with modern guts. The Bluetooth audio system, which includes a 10-inch subwoofer, is completely hidden. Even the rear-view mirror is original and wears 70 years of patina. There’s no tach. “We couldn’t figure out how to include one without changing too much,” says Ward.

Beautifully integrated air conditioning vents hide in plain sight, and then there’s the steering wheel. It’s an exact replica of the car’s original translucent blue plastic unit, a rare option, but with a smaller 16-inch diameter. “It just works better with the quicker 16.8:1 rack-and-pinion steering system we’ve fitted,” he says. There’s also a tilt steering column, to which matching patina has been applied, modern three-point seatbelts and a small console on the floor with a bit of storage and cupholders.

It doesn’t look like much bodywork has been performed, as the Hudson’s flaky original lacquer paint job, rusty chrome bumpers and factory trim remain. Its roof looks chopped but isn’t. Ward even left the factory drip rails and the foil tape covering a hole in the front bumper. “We were going to fix that,” says Ward. “But the owner told us to leave it, it’s part of the car’s story.”

In reality, however, there’s been quite a bit bodywork. The Hudson’s rusty floors were replaced, copious amounts of sound insulation have been added and rot on the bottom of the doors had to be dealt with. The paint has been blended perfectly—you’d never know. The vintage spotlight and third brake light aren’t factory but are period accessories that have been rebuilt. 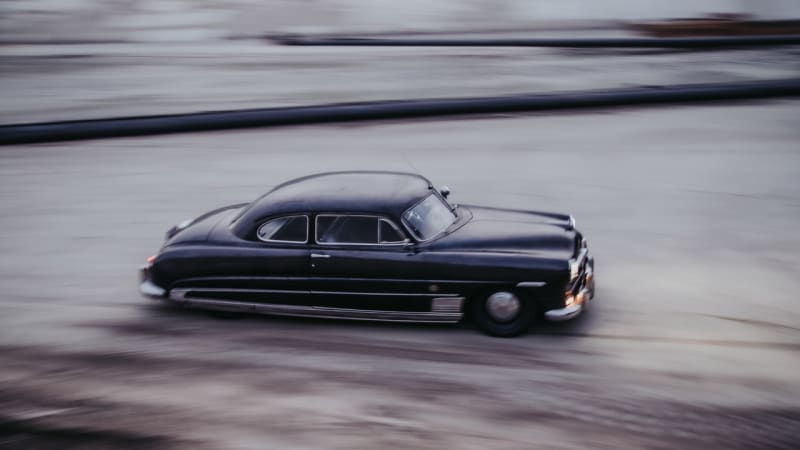 This is the first Icon powered by a supercharged LS9 from a C6 Corvette ZR1, although Icon is now fitting another in a 1970 Mercedes 300SEL. The 6.2-liter crate motor is rated by GM to produce 638 horsepower at 6,500 rpm and 604 lb-ft of torque at 3,800 rpm. But Ward says they fitted a smaller pulley to the blower to increase boost and gained about 60 hp.

Per the owner’s desires, the Hudson’s custom Borla 2.5-inch dual-exhaust system isn’t too loud. The LS9 starts with a rumble, and sounds great with a throaty roar, but doesn’t echo off buildings. There also isn’t much blower whine, even at full throttle.

Icon fabricated steel inner fenders along with beefy braces that tie the factory firewall to the Art Morrison front subframe. “I was worried about putting all this power in the stock unibody,” says Ward. “So we stiffened it up considerably, but we didn’t put a full frame under it.” The tank for its dry-sump oiling system has been hidden away in the right rear quarter-panel and the battery has been moved to behind the back seat.

On the road, the Hudson feels sturdy — no squeaks or rattles, and the adjustable four-wheel independent suspension effectively soaks up large bumps, even railroad tracks. Art Morrison also engineered the rear subframe, which is equipped with a Dana 60 rear end with 3.54 gears.

It’s a cruiser, rolling on Goodyear Eagle RS-A radials, sized 235/50ZR-18 front and 245/55ZR-18 rear. Billet wheels wearing the factory Hudson hubcaps hide large Brembo brakes, which are much appreciated in traffic. At 4,300 pounds, this land yacht weighs about 1,000 pounds more than a C6 ZR1. It stops well. Like its steering, its brake pedal action is light but precise. 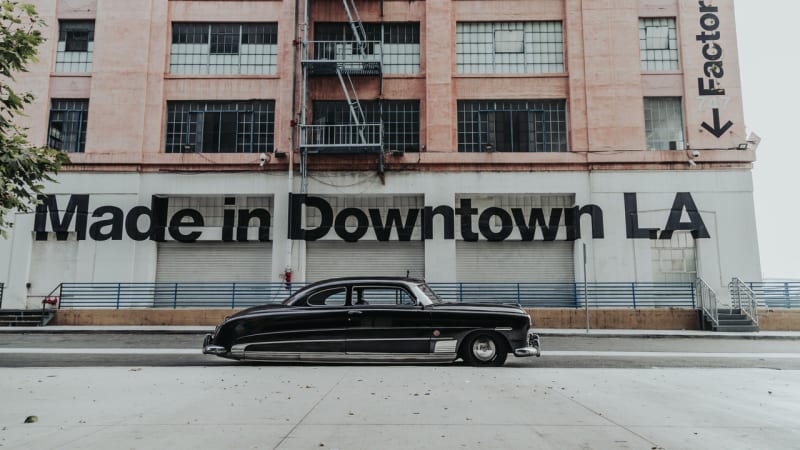 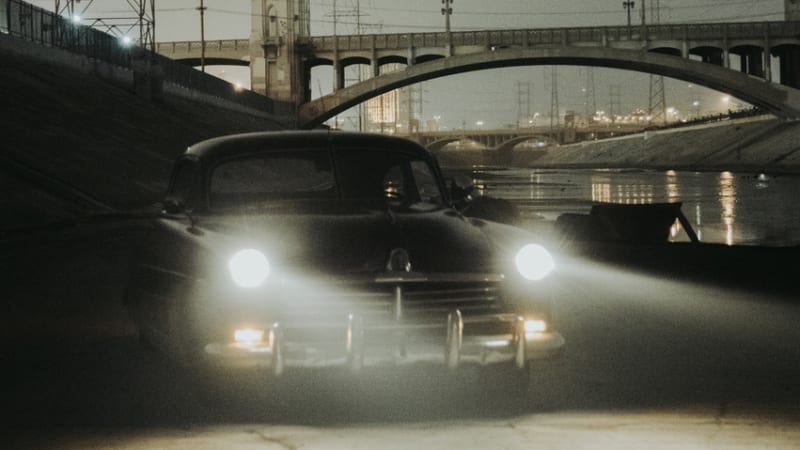 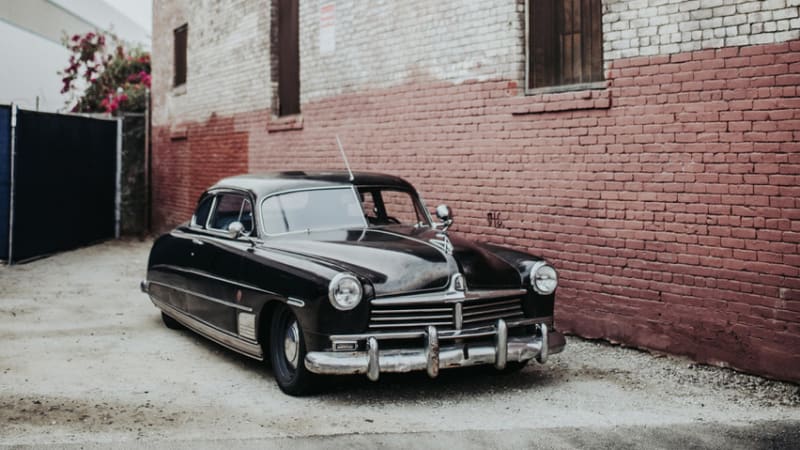 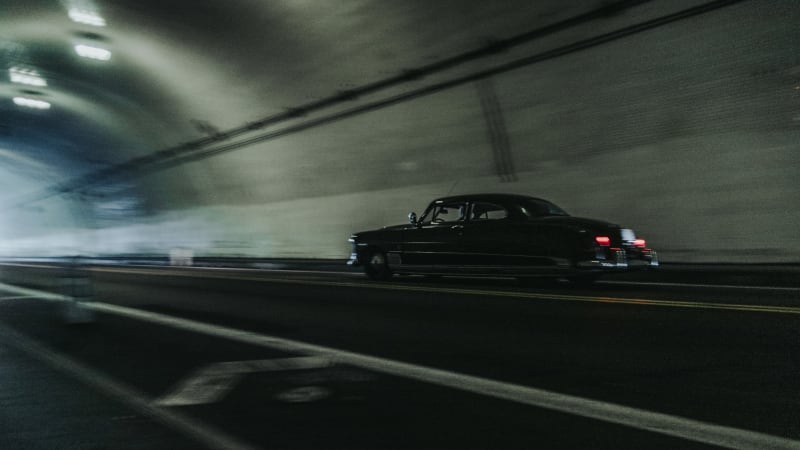 On a chassis dyno, the engine produced 478 horsepower and 457 lb-ft, so its beefed-up 4L85-E four-speed automatic is certainly consuming quite a bit of power. “I’m not really a believer in six-speed automatics,” says Ward. “There’s just two more gears to shift through and two more things that can break. My clientele isn’t too worried about fuel economy. I’ve done a couple of six-speed builds, but I prefer the four-speeds.”

Gearchanges are snappy, and the Hudson barks the tires when it shifts into second gear at full throttle. “When I drove it to Pebble Beach last August, I learned that it also chirps the tires shifting into fourth gear at about 115 mph. I was way out in the middle of nowhere near the James Dean Memorial, but I only did it once,” says Ward.

Sitting down low in this hot rod, looking out over the Hudson’s faded black paint, its chrome hood ornament out in the wind, is a stark contrast to driving one of Icon’s shiny 4x4s. It’s almost impossible not to take on the gangster lean and more than a little attitude. Which helps explain the “BAM” on each of the Hudson’s doors, a request from the owner.

“Are those the owner’s initials?” we ask. “Nope,” says Ward followed by a long pause. “It stands for Badass Motherf***er.”