What new Ford Mustang would you buy?

Now that the Mach 1 is out, we poll the room to see which pony we'd drive home from the dealership

Ford keeps adding models to the Mustang lineup at a downright glorious rate. The 2021 Ford Mustang Mach 1 is just the latest in a line of spectacular choices that range from the four-cylinder EcoBoost all the way to the mega-pony Shelby GT500. There are plenty of excellent models in between, so we decided it was time to see where our staff landed on Ford’s current Mustang lineup.

The rules are simple. If it’s listed on Ford’s website now, or it’s been announced (Mach 1), the pony is fair game to choose. Assuming you’ve been following along with our “What would you drive in 19XX?” posts, this format should appear fairly familiar to you. But don’t just listen to us. Please, tell us which new Mustang you’d park in your garage in the comments below. 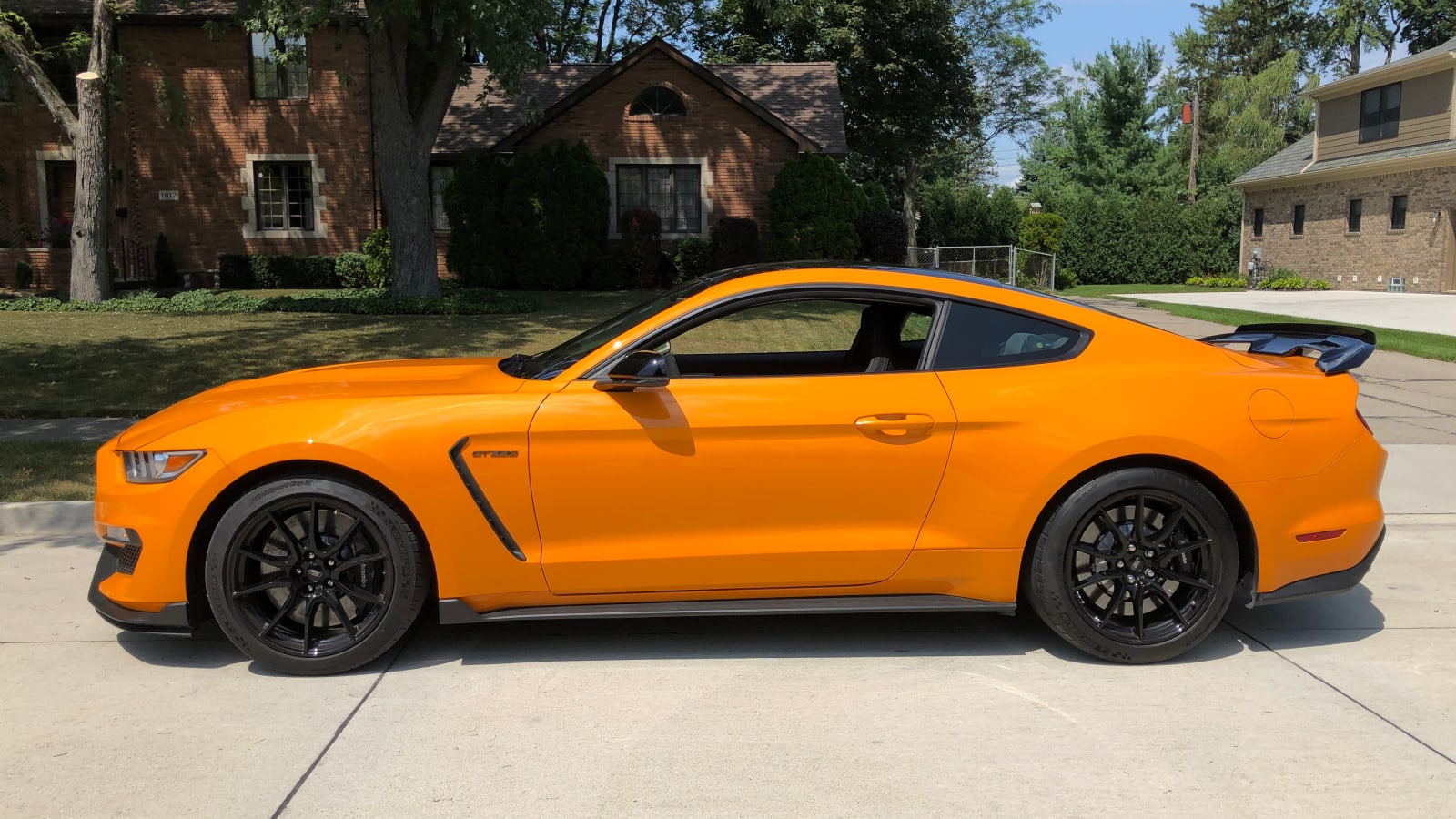 Road Test Editor Zac Palmer:  I’ll kick this list off with what is obviously the best Mustang you can buy: the Shelby GT350. Hearing one go by is all that’s necessary to become a convert. Before the new GT350 came out, I was as far from a Mustang Guy as you could get. After getting seat time in one, it became my semi-reasonable dream car. There’s no better sound on the market for $61,635, and if there is, I haven’t heard it yet.

Plus, the GT350 doesn’t feel particularly Mustang-like. It benefits from the excellent-handling platform underneath the regular Mustangs, but the rock-hard brakes, improved steering/handling and torque curve (8,250 rpm redline!) all lend it a totally different character. This flat-plane crank 5.2-liter Voodoo V8 probably isn’t long for this world, but it’s been an absolute pleasure while it’s lasted. And sure, the GT350R is still out there, but at $74,630, the allure is starting to look more like debt. I might have mine in the Heritage Edition spec, finished in Wimbledon White with Guardsman Blue stripes, but the orange one I drove last year is rather tempting, too. 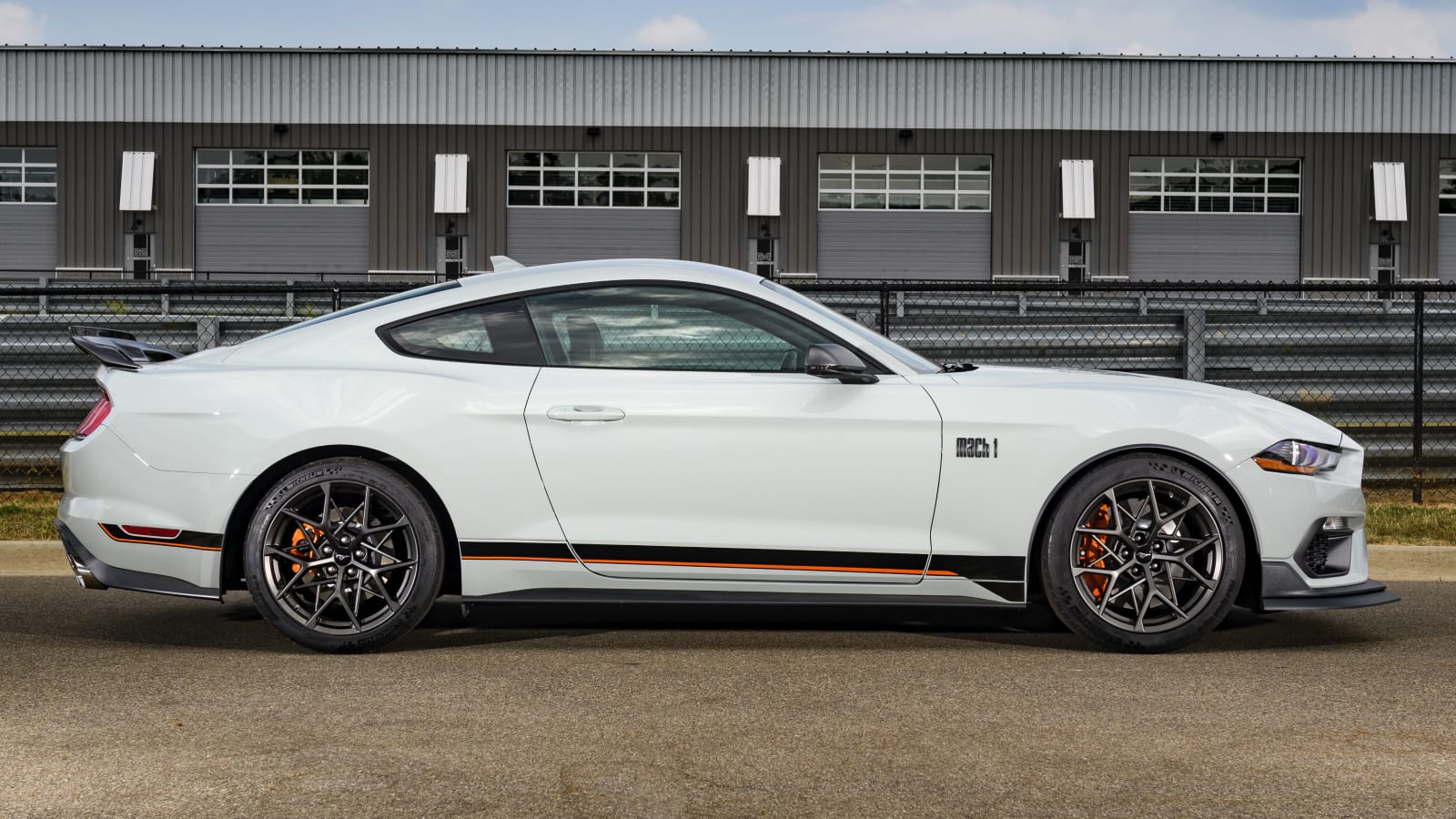 Associate Editor Byron Hurd: I'm developing a bit of a reputation for being "that guy" with some of my round-up picks, so why stop now? I chose the new Mach 1, and while "duh" might be an adequate explanation as to why, I do have more coherent and rational reasons for being attracted to this particular model.

A few years (and in many ways a lifetime) ago, I actually owned a S550 Mustang. It was a 2015 GT with the 6-Speed, Performance Package (back then there was only one) and a set of cloth Recaros — in other words, the exact configuration every forum dweller claims to want, but never actually purchases. Take that, trolls.

When we first decided to pick a Mustang for this week's feature, I was merely going to duplicate my previous build, but add on the new Performance Package 2 to get the fancy MagneRide suspension, which wasn't available back when I bought my '15. Once I priced that out, I realized that it was encroaching on special-edition Mustang territory. Why not go for broke? 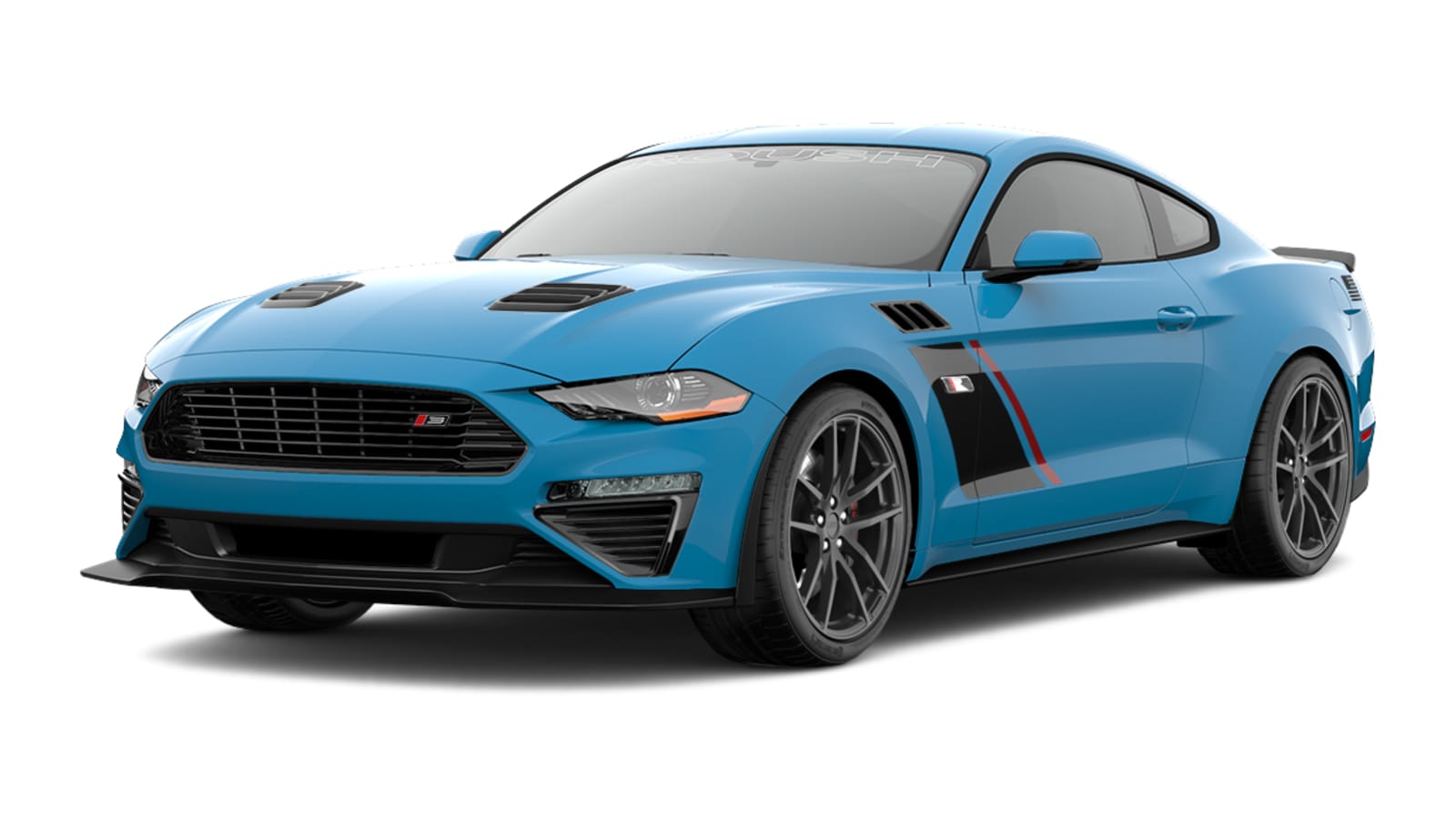 Senior Editor, Green, John Beltz Snyder: I'm sticking with the spirit of the game and not picking a version of the Mach-E, as that's a different model, despite having "Mustang" in the name. I will bend the rules, though, and pick this Stage 3 build from Roush. It takes the base Mustang GT Fastback and adds a Roush supercharger, making it good for total of 750 horsepower. I've driven a handful of Roush Mustangs in the past, and have always loved the aesthetic treatment the outfit gives to the cars. In this case, I'm keeping it "simple" with the standard Signature package with Sport interior as opposed to the more expensive Competition or Podium packages and Premium and Track interiors. I'm ponying up the extra $255 for the ripping X-Pipe sound, and adding the less-garish Agate Gray forged wheels for $1,595.

In the end, I'll be pushing up near to GT500 power from 5.0 liters with plenty of dynamic upgrades to handle it, plus some fresh looks that will stand apart from other Mustangs, all for a total price of $63,670. Then I'm going to go for a nice, long drive and try not to think about how I could have just waited and gotten the Mustang Mach-E GT I really want for that same price before tax incentives.

News Editor, Joel Stocksdale: All these V8 Mustangs are great, but the one that really grabs me is the EcoBoost High Performance Package. Mine would absolutely have the 6-speed manual and be a coupe painted in Grabber Lime. The reason for going with the "lowly" four-cylinder is that it fixes my biggest issue with the V8 cars: the nose-heavy handling. They don't feel willing to dive into a corner, and it ruins some of the fun for me.

Turns out losing a bank of cylinders and a set of cams takes a lot of that weight off the nose, making the EcoBoost HPP nice and pointy. It feels much better balanced and playful in corners. And sure, it's not as potent as the V8 models, but it's not slow either, and you can floor it more often without the risk of attracting the attention of the police. It even makes a great snarly four-cylinder noise, and its turbo nature should mean there are cheap and easy power gains available. And of course, it's not nearly as expensive as some of the V8 models my colleagues have shared, and it's more fuel efficient, so there's money in the budget for upgrades. 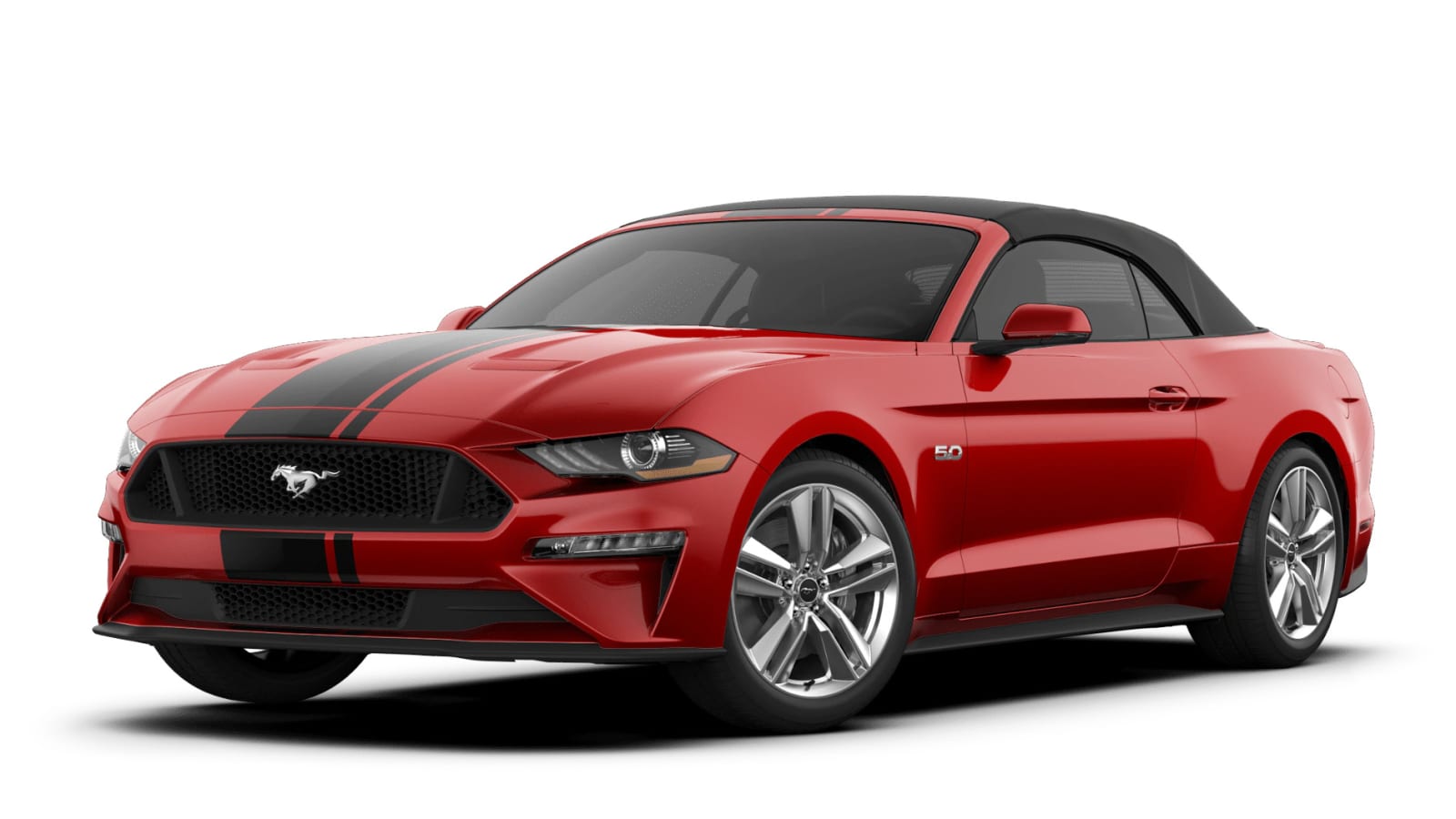 Consumer Editor Jeremy Korzeniewski: With all due respect to Joel, who opted for a four-cylinder EcoBoost in his mythical Mustang build, I believe a proper 'Stang deserves a proper V8 and six-speed manual transmission. Because burble burble. And go fast. What better way to hear all that mechanical mayhem than with a convertible? So instead of choosing a rip roarin' Shelby I'll go with a regular-grade GT that may a bit more mundane but is still plenty fast with 460 ponies and 420 pound-feet of torque.

I went with Rapid Red for my build — again because this is a Mustang GT and therefore red just looks right — and threw on some cool muscle-car-spec wheels to match. I think the black stripe matches up well with the black top and bright wheels, and it reminds me of the '69 Mach 1 that was parked in my garage as a kid and is now parked in my father-in-law's garage. And if I'm going that far with a matchy-matchy color scheme, why not add the black and red leather interior, too? My Mustang comes in right around $50,000 so equipped, and even if I would personally rather plug a Mach-E in my own garage, I think anyone who chose to sign on the dotted line for such a beastly ride would have a blast burbling down Main Street and turning heads along the way. 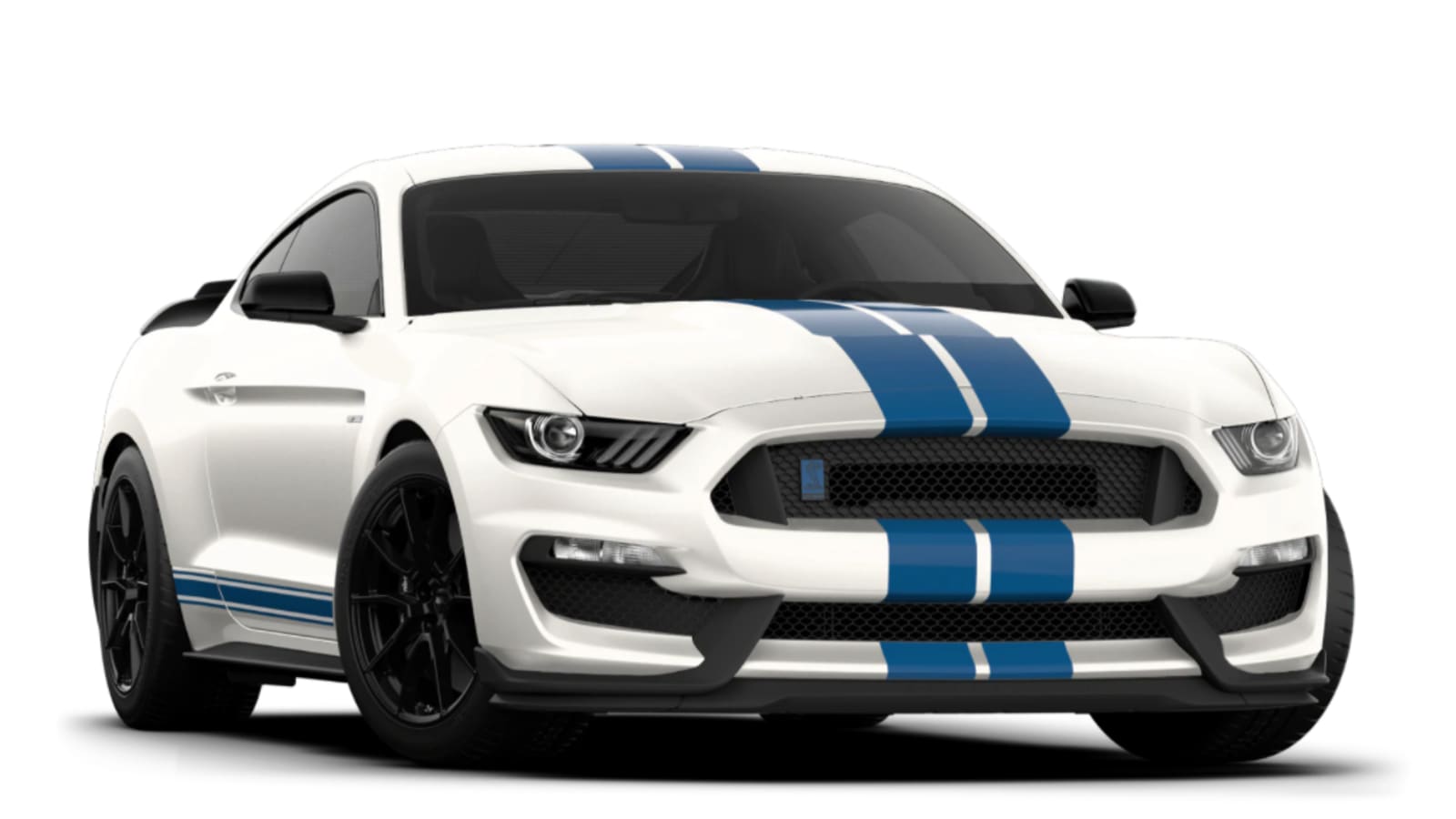 Managing Editor Greg Rasa: I was going to go with an EcoBoost HPP convertible, for all the reasons Joel mentioned. And because I drove one recently and enjoyed the hell out of it. But you know what, once I started in with the options, I got up to about $15,000 shy of a GT350 coupe. So, change of plans — if you're going to eat the cow, don't choke on the tail. Zac already took orange, so I'll go with the classic Shelby combo of Wimbledon White with blue stripes so we don't get mixed up in the parking lot. But if the Mach 1 winds up being a comparative bargain, I'd be down for that, too.

$972 - $2,165 Nat'l avg. savings off MSRP
See Local Pricing
I'm not in the market for a vehicle at this time. Please move this suggestion to the side for 30 days.
Huge Savings