THERMAL, Calif. - Usually, we drive Icon’s latest creations on the roads, freeways and trails near its Chatsworth, Calif., headquarters. And company founder and chief designer Jonathan Ward is usually along for the ride. This time, however, things went differently. This time, it was the truck’s new owner calling the shots.

His freshly Icon-built 1970 Ford F100 was at the Thermal Club, a motorsports country club and community east of Palm Springs. One of the finest facilities of its kind in the country, Thermal is billed as an all-inclusive private destination for the distinguished motorsports enthusiast. The truck’s new owner is a member and keeps many cars on the grounds, including dedicated track cars, which he enjoys on its three racetracks.

When we arrive, the 50-year old 4x4 pickup is sitting in the hot sun, towering over a few Porsches and other assorted sports cars. It’s toasty out here, 111 degrees, but it’s a dry heat.

Icon is best known for its big-buck customized first-gen Ford Broncos, but pickups are also a significant part of its business. Its Icon TR line of LS-powered 1947-1953 Chevy Thriftmaster pickups has proven popular.

“I stumbled into this truck, and fell in love,” Ward says of the 1970 shortbed Ford he had found on Craigslist. “I posted it on Instagram, and the client immediately reached out and commissioned the build. Originally, it was going to be a Derelict build, but he changed his mind and decided to go Reformer.” 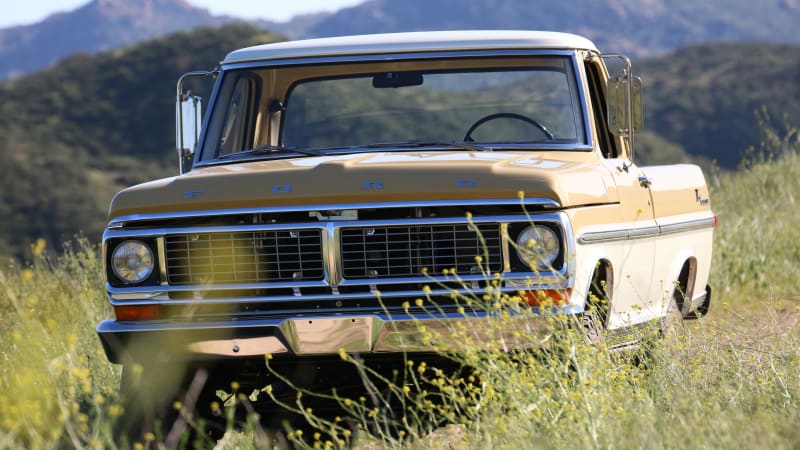 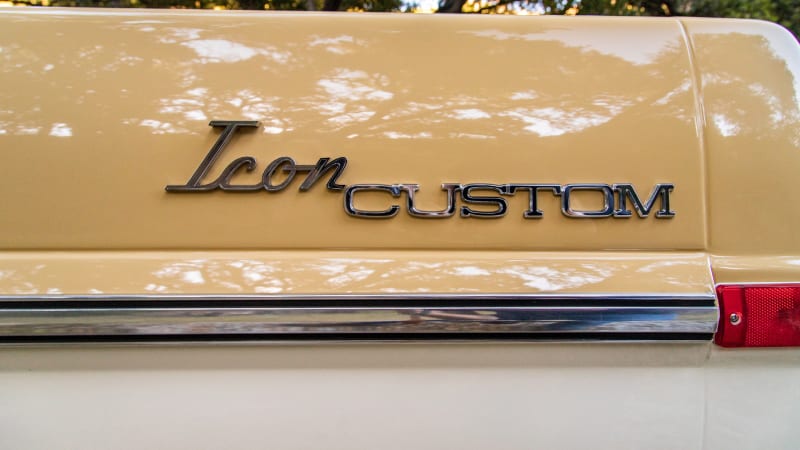 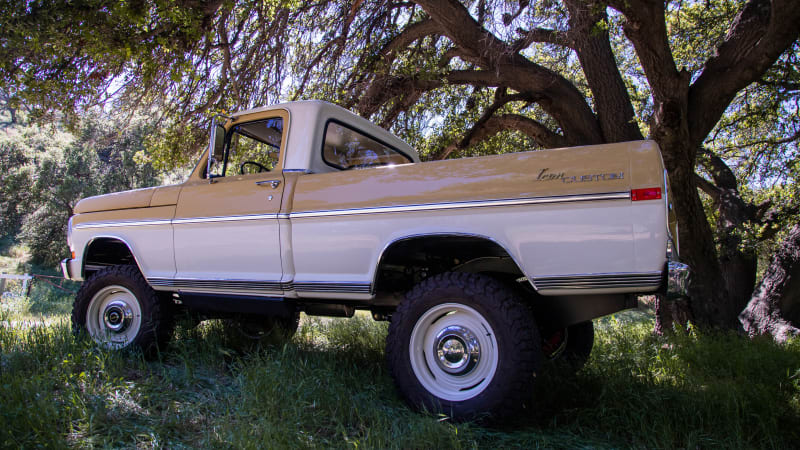 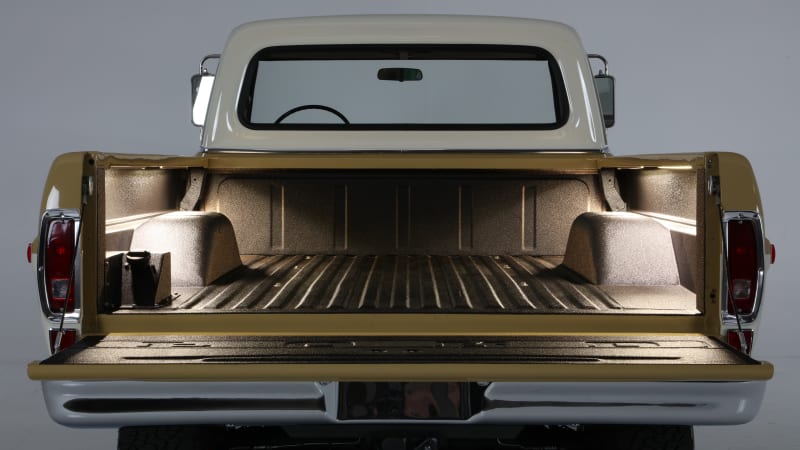 Icon’s Reformer projects are custom one-offs. Classics of any type are restored inside and out to better-than-new condition and are updated mechanically for improved performance, comfort and reliability. They’re basically restomods. “We tailor the mechanical experience to our client's personality and use,” says Icon’s website.

So far the company has built more than a dozen, including several pickups: two Dodge D200 Power Wagons from the mid-1960s and a 1965 Ford F-250 crew cab 4x4, which is still one of Ward's favorites. Ward will basically build anything a customer wants. Just bring your checkbook and your patience.

Each is completely hand-assembled and reengineered at the company's 75,000 square foot facility in Chatsworth. How many man-hours are needed to create to build such a truck? “Dang, just internally, over 2,400 hours,” says Ward. “Then add our sublet labor, including upholstery, paint, metalwork, fab, axles, etc. and it’s probably reasonable to say about 4,000 man-hours.”

Icon Broncos require about 750 man-hours of labor and run $185,000 to $295,000. “These one-off projects cost considerably more,” says Ward. “All of the design and engineering that we are able to amortize in a production scenario needs to be accounted for on this single project.” In other words, this has got to be the most expensive 1970 Ford F100 Ranger pickup in the world. It probably cost its owner close to half a million dollars. 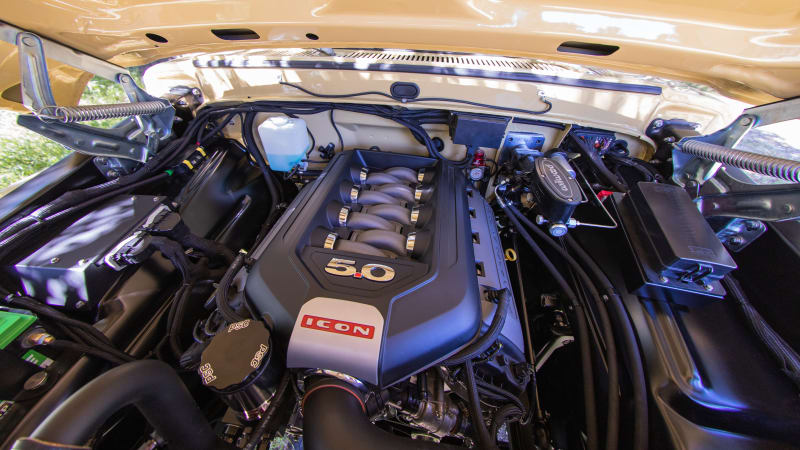 “What we’re doing is rewriting history to a certain extent by creating a bespoke truck that can serve as a daily driver with timeless style, modern engineering, and none of the sacrifices commonly associated with conventional restorations,” says Ward.

It’s the same combination Icon uses in its Broncos, and the installation couldn’t be cleaner. We also notice the larger aluminum radiator, two large electric fans, headers, power steering and a custom airbox. A fuel pressure regulator is mounted to the firewall next to a Wilwood master cylinder for the hydro-boosted brake system, which also includes huge Brembo discs and massive red calipers, six-piston units up front and four-piston in the rear.

Just as they do in Icon’s Broncos, those big brakes dictate big wheels. The Ranger rolls on a set of 18-inch forged-aluminum wheels that mimic the look of the factory steel units right down to their vintage hubcaps. They wear beefy BFGoodrich All-Terrain T/A K02 tires sized 285/65.

Before we climb up into Ford’s cab, we notice a splattering of bugs on the leading edge of its hood and front bumper. Someone drove the pickup to Thermal, more than 200 miles from the owner's home in Santa Barbara. The paintwork is pristine and Icon has perfected its gaps and the smoothness of its large panels. The truck’s doors open and close with a click, like a 1980s Porsche 911. Ford didn’t build them this well back in 1970.

Most of the factory trim remains. The only additions are custom Icon Custom badges, affixed to its bedsides (the stock badge said Sport Custom). The truck also wears its original blue California license plates and factory colors, a tasteful combination of Wimbledon white and Tampico yellow.

Its fuel filler has been moved to the bed, which has been raised slightly and protected with a coat of spray-on liner. Icon also added LED taillights and bed lights, and every panel on the truck was powder-coated before paint for additional corrosion protection. The truck’s original cab turned out to be so rusty that a second truck was purchased for its cab and other parts. 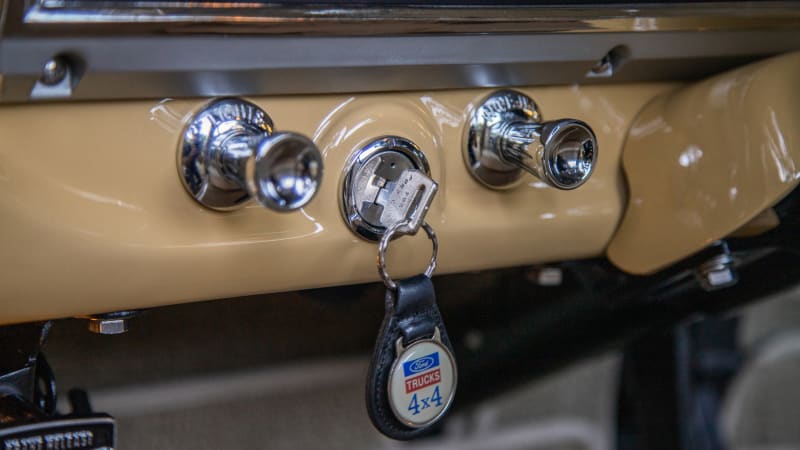 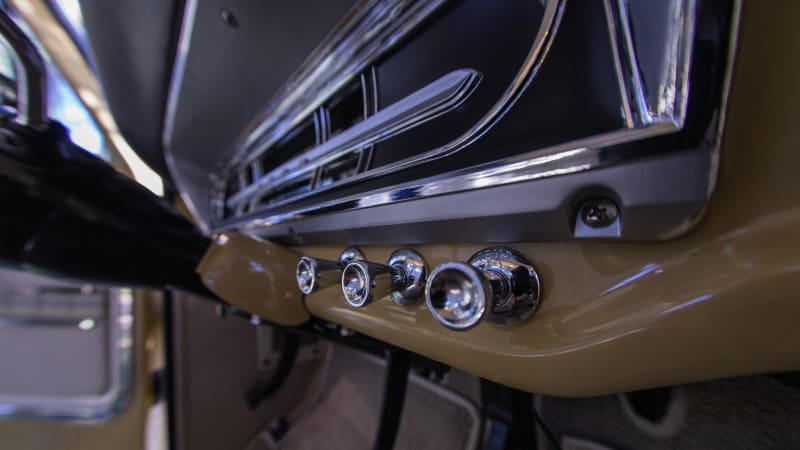 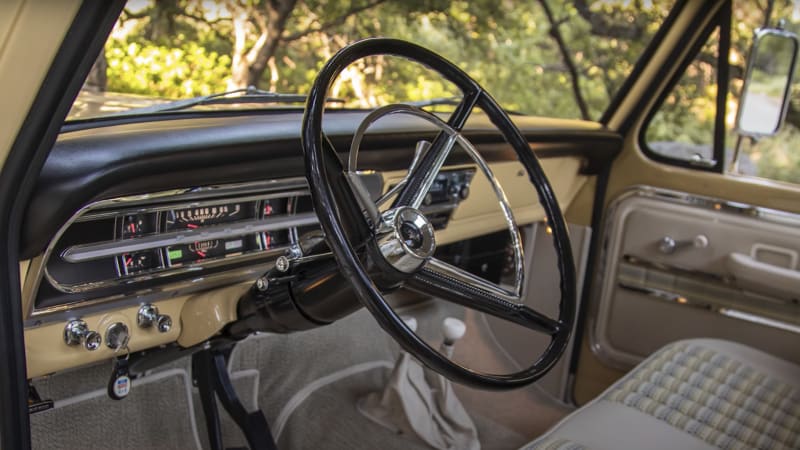 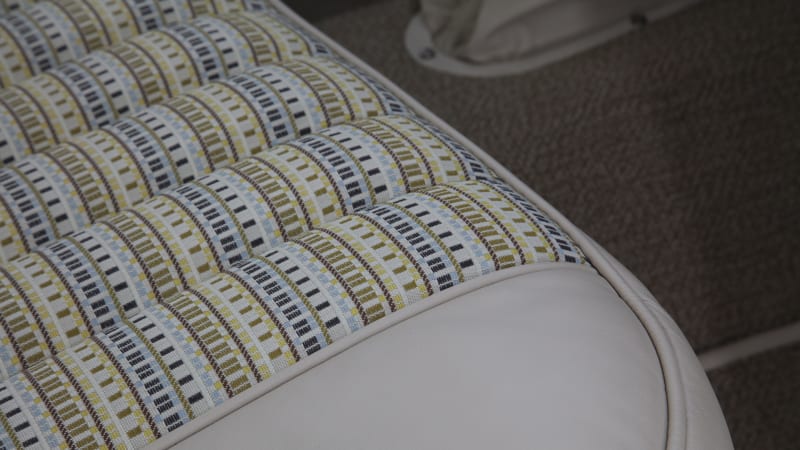 Click open the door and a sidestep drops down to help you climb in. The interior is a mix of originality and modern upgrades. It’s also a tight fit. The pedals are close, and these old trucks put the steering wheel right in your lap. The bench seat is flat and firm and covered in a proper retro pattern and leather that matches the original factory vinyl.

The dash is mostly stock, but Icon has fitted a full cluster of analog gauges from Dakota, custom chrome aluminum knobs and a modern Bluetooth-based audio system that utilizes the original AM head unit in the stock location. The amps and speakers are hidden behind the seat and kick panels.

A Vintage Air HVAC system pokes out from under the dash. The chrome column shifter remains, and the owner requested manual windows for a vintage touch. Icon has also reinforced the B-pillars, added three-point seatbelts, and lined everything in several layers of heat and noise insulation.

The key is original, along with the ignition switch that’s to the left of the truck’s new tilt steering column. The restored deep-dish steering wheel's smooth hard plastic feels good in our hands. One twist of the key and the 5.0 erupts to life and quickly settings into a 950-rpm idle. The single Borla exhaust pulses through the floor and pedals. The odometer is digital and registers 1,334 miles.

After a few minutes of cruising with the windows down, elbow on the door, we roll’em up and crank up the air conditioning. Although there’s only one vent, located below the audio system, the truck’s small cabin cools down quickly. 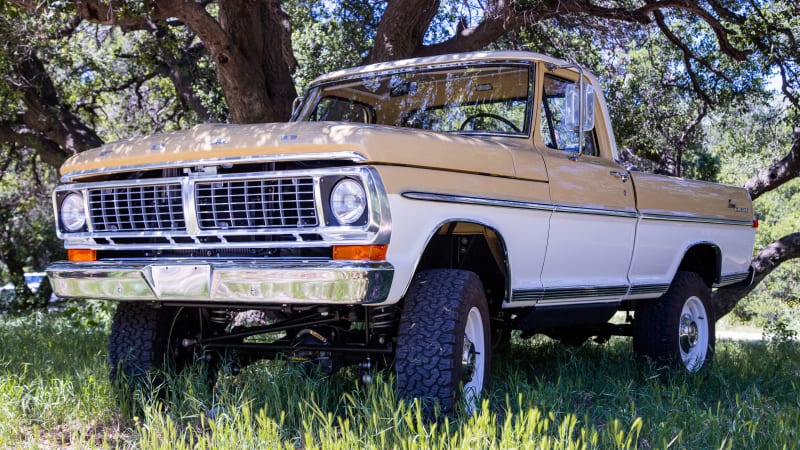 Mix of New and Old

On the road, the truck is dynamically a mix of new and old. Compared to a stock 1970 Ranger it feels like a new Raptor, but compared to a new Raptor it feels like a 1970 Ranger. The Coyote is responsive and sounds great, with a deep rumble, and the four-speed is alert, clicking down out of overdrive when you prod the throttle. And there’s plenty of power. Nail it off the line and the 5.0 spins the truck’s big back tires for about 10 feet and pulls hard. At wide-open throttle, the transmission upshifts at about 6,800 rpm, and the gear changes are firm but smooth.

Despite the intense mid-afternoon heat, and the truck’s air conditioning on full blast, the V8’s water temperature never climbs over 200 degrees, even during some extensive idling while I take notes. The steering is light and slow, but precise, with no slop, and the brake pedal is firm and easy to modulate. This is an easy truck to drive. But the biggest surprise is its ride quality — smooth with just a touch of truck bounce. With four-links in the rear and radius arms up front, the suspension soaks up big bumps extremely well.

Icon has also replaced the truck's frame with one from Art Morrison and its solid front and rear axles with new units from Dynatrac ProRock. The front differential is now a Dana 44 with hardened shafts and the rear is a Dana 60, which is seriously stout. There are coilovers with Eibach springs and Fox shocks all around, and front and rear sway bars as thick as my wrist. The setup offers considerably more travel than stock, and the articulation is impressive over a few mild desert obstacles. “We didn’t do lockers on this one cause it’s not really going to be a trail-duty sort of truck,” says Ward.

At highway speeds and around town the pickup feels solid and stable. There’s none of the tippiness you feel the first time you drive one of Icon’s Broncos, which are considerably shorter and narrower, and it doesn’t seem as affected by crosswinds. The only drivability issue is caused by the truck’s vintage tow mirrors, which are certainly retro cool but block your vision when making left turns.

Like its Broncos and other builds, Icon’s Ford F100 delivers just the right mix of modern and “kitsch, retro, funky goodness that we dig” — as Ward likes to say. And there are more pickups in the company’s future, including a seriously cool NAPCO-style Thriftmaster 4x4, a 1961 Dodge Long Bed and a 1947 Hudson Big Boy. Bring your checkbook and your patience.