Tesla Cybertruck: Jay Leno and Elon Musk drive a square peg through a round hole

It gets its first-ever drive in the Boring Co. test tunnel

We’ve known for a few months now that the Tesla Cybertruck would get a spin through “Jay Leno’s Garage,” with a slew of photos and videos of the titular host driving in a prototype with Elon Musk flooding social media back in January. The segment finally aired on CNBC on Wednesday and, well, here it is.

We learn surprisingly little that’s new about the hard-angled, high-riding electric pickup truck except that a) you can walk on the vault, the retractable panel that covers the bed, b) Musk decided to give the Cybertruck bulletproof glass because “It’s badass”, and c) the extra-large pickup barely fits inside a Boring Co. tunnel elevator. Musk says it’s the first time anyone has attempted to drive the Cybertruck inside his other company’s 1.5-mile underground test tunnel. (We’ll also note here that Musk’s comments from the episode about the prototype being “5% too big” are already passé, as the CEO recently announced the large size would stay the same for production.) 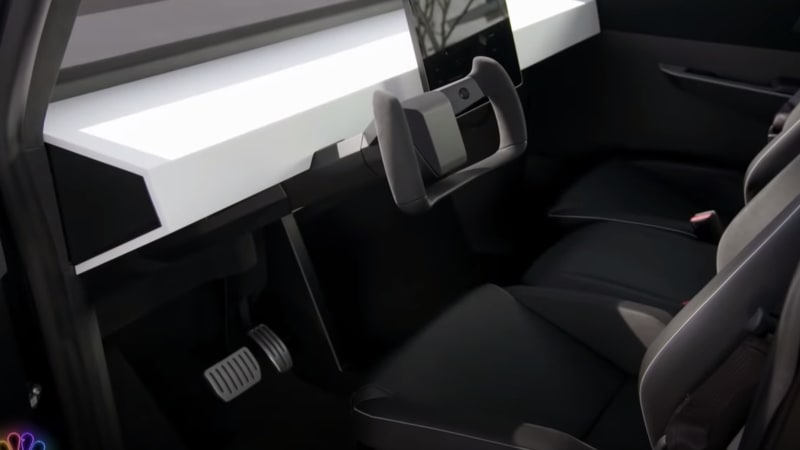 The video does give us a few valuable seconds of walkaround-style camera pans of the truck, along with a brief look at the front row of its futuristic, spartan interior cabin. We get a brief glimpse of the new paper-composite dashboard made to look like marble, which might be backlit and features Tesla’s signature huge touchscreen and a concept-style steering wheel that will no doubt disappear before production. There are no dials, buttons, gauges or even climate vents to be seen on the dash. Frankly, we’re not sure the image we see isn’t a rendering subbed in among the other real-life footage.

We also get a sense of the impressive airiness that Leno mentions inside the truck, courtesy of that long, angled front windshield pane and the sunroof. Beyond that, Leno reports that the truck features Tesla’s signature instant acceleration, but we wouldn’t know it from the drive itself, which has all the excitement of a trip to Home Depot. There is some interesting discussion during the non-Autopilot drive through the Boring Co. tunnel itself in which Musk dishes some details on that whole traffic-diverting scheme, if you’re into that sort of thing. It starts at around the 4-minute mark.