Our roads may be virtually empty, with Americans all cooped up and nowhere to go. But with jet planes and TSA lines looking iffy and icky for the foreseeable future, the great American road trip is poised to reclaim its preeminence in travel.

To test that post-pandemic theory, in a purely theoretical way, I requisition a 2020 Aston Martin Vantage for a daytrip from New York to the Catskills. It’s the kind of high-character “import” sports car that once defined the breed, before corporate imperatives watered the character down. Aston’s two-seater is nakedly beautiful, flawed-yet-fabulous, and expensive as hell. But if you drive the Vantage and don’t fall head-over-loafers, I’d accuse you of not caring for sports cars at all. It’s as alive and engaging as any sports car out there, a 509-horsepower firecracker that rewards skilled drivers – or dings them for mistakes – in defiance of the trend toward all-wheel-drive automatons.

As for the Catskills, it’s in the midst of its own explosive comeback. This rough-hewn mountain region, a convenient two hours north of Manhattan, was once the prime vacation destination of the Northeast, so popular in the late 19th century that a 1,200-room luxury hotel was required just to gaze at some waterfalls, with guests including U.S. presidents and Oscar Wilde. Through the 1950s and 60s, it continued to be the pipeline to nature for Jewish families and other northeast tourists. Their summer camps and sprawling “Borscht Belt” resorts and nightclubs mythologized in films like Dirty Dancing and now television’s The Marvelous Mrs. Maisel, which has fetishized Catskills nostalgia to a truly marvelous degree. 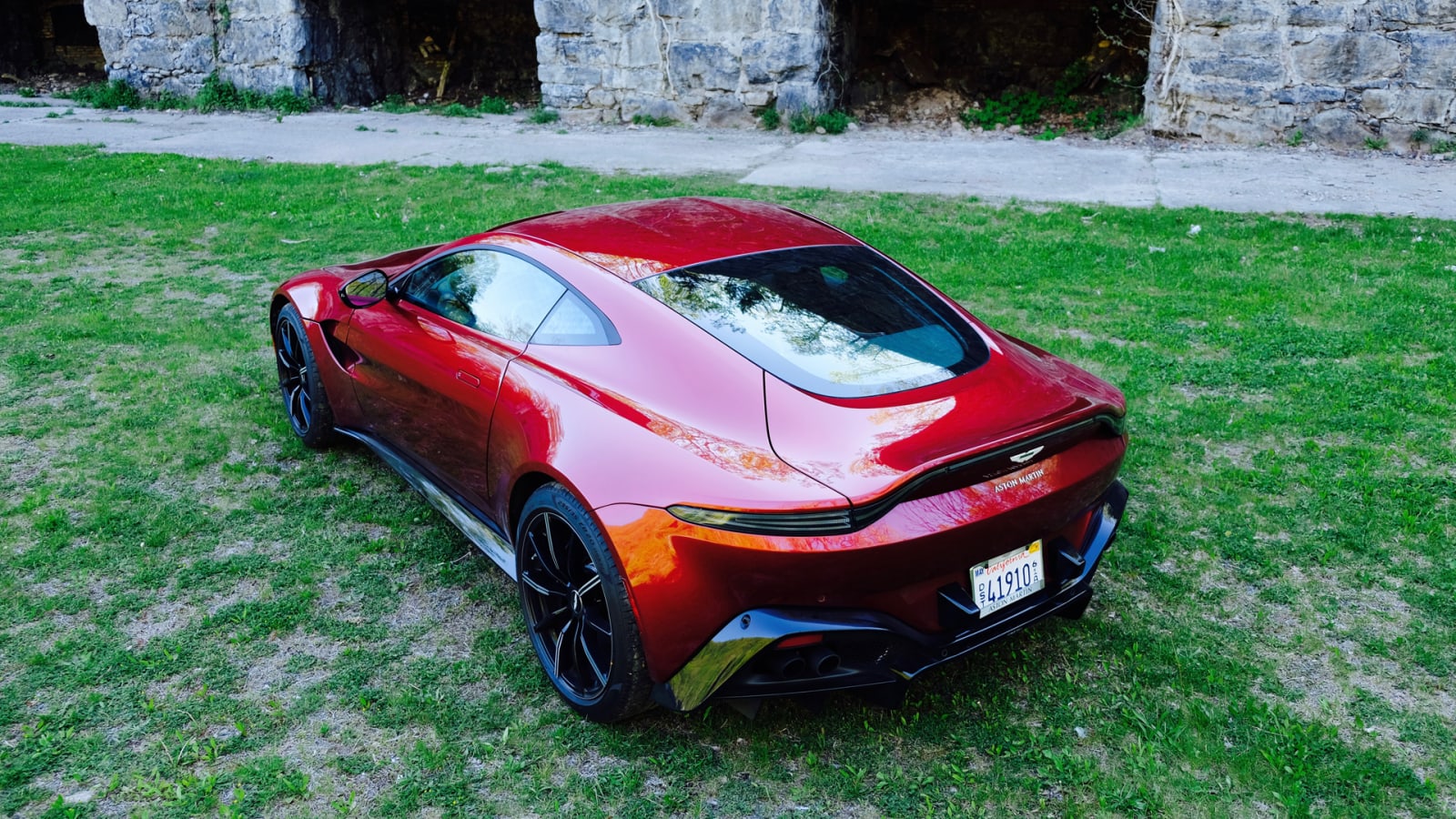 Then came airline travel, and affordable tickets to Miami Beach and other exotic warm-weather locales. Like a Palm Springs of the east, the Catskills fell into steep decline. The region became a punch line of corny kitsch. As with Palm Springs, fashion has come full circle: The Catskills and adjacent Hudson Valley are red-hot again, rediscovered by Brooklynites especially as a magical spot for affordable second homes, or permanent moves to open farm-to-table restaurants, curated antique shops and other bastions of rustic hip.

The Vantage lures me from coronavirus lockdown like a movie idol waving outside my Brooklyn window, for a cannon-shot recon run to Woodstock. This wasn’t the new-for-2020 Vantage AMR that I first drove in Germany, with its lightened body, stiffened suspension and optional, dogleg-style manual transmission. But this standard Vantage was still alluring enough to draw my neighbors outdoors for some heavy breathing through their masks. The shark-mouthed, wide-hipped Vantage may go down as designer Marek Reichman’s brave masterpiece, the first Aston in ages that comes across as a truly new sports car; more than another Russian-doll replica of the DB7 (and its successors) that Reichman’s predecessor, Ian Callum, gifted the automotive world in 1993.

Aston wrapped its aluminum-tubbed baby – its chassis 10% stiffer than the pricier DB11’s – with aluminum, steel and composite panels, for a svelte dry weight of 3,366 pounds. It goes down further with optional, weight-saving forged wheels and ceramic composite brakes.

Combine that with a wicked-fast 13.1:1 steering ratio; an eight-speed ZF automatic transmission (with a carbon-fiber prop shaft); and Mercedes-AMG’s superlative, 4.0-liter twin-turbo V8 with 509 horses and 505 pound-feet of torque, and you’ve got a British-German missile that cracks 60 mph in 3.5 seconds, and reaches a 195-mph peak. The DB11 has adopted this optional V8 as well, which only improves its handling versus the V12, though the Vantage gains more off-the-line advantage with a shorter final-drive ratio of 2.93, versus 2.7 in the DB11. 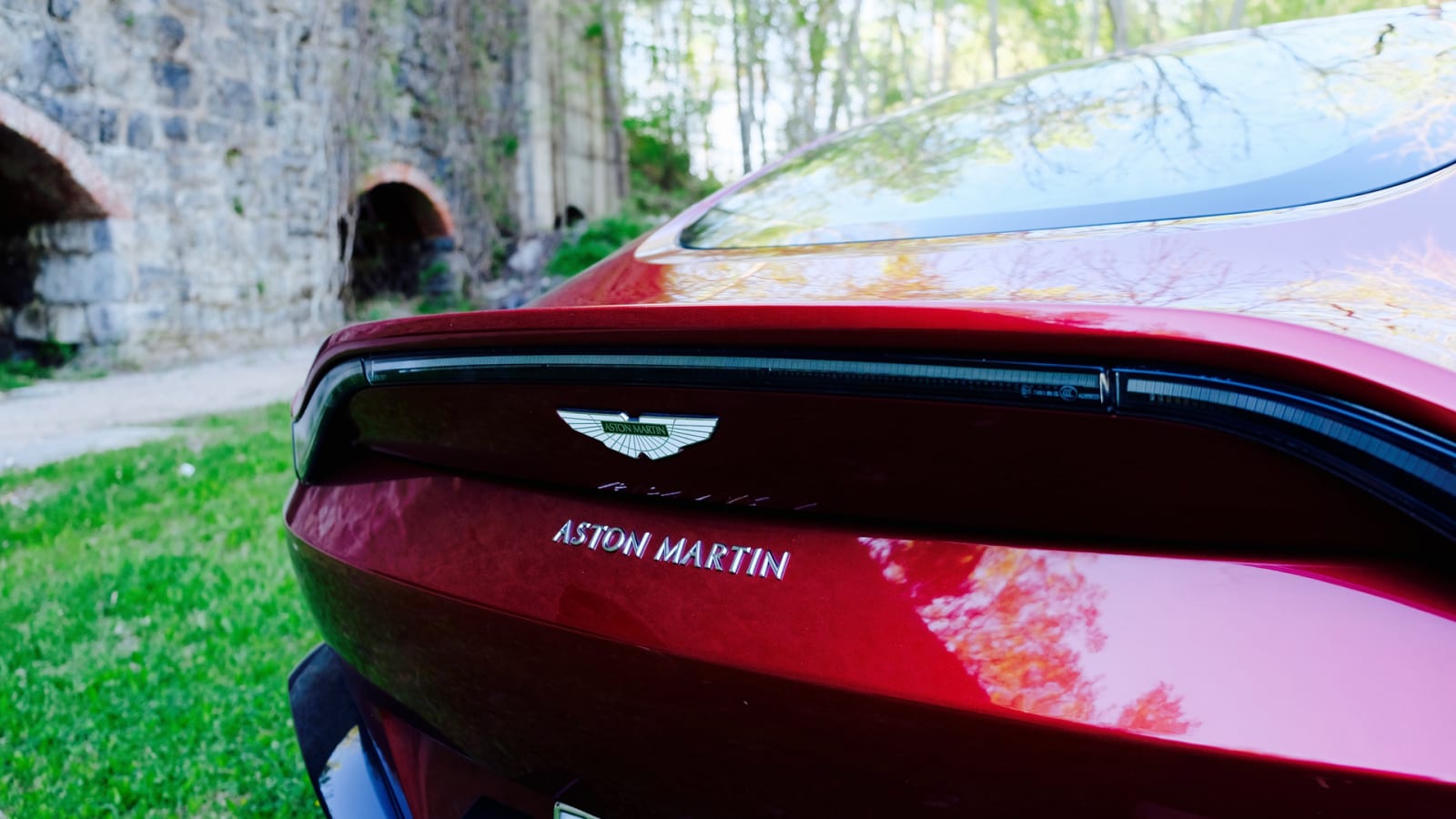 As any car enthusiast knows by now, there’s at least one covid guilty pleasure: I knock out the 112-mile run from Brooklyn to fabled Woodstock in 100 minutes flat, a trip that can take up to three hours in “normal” weekend traffic. In this hippie-loving mecca, the late-spring weather is idyllic enough to spark a poetry reading, or an appropriately distanced drum circle. But I’m still expecting a ghost town, albeit with the spirits of local maestro Levon Helm, Dylan and other counterculture legends. Instead, it’s more like ghosts holding their breath, the calm before the hordes. The vacation-anticipation is palpable. Residents and tourists peer into shuttered restaurant windows, looking ready to bust down the doors and fix themselves a drink. Lines form at open bakeries and coffee shops that are making the best of the brutal situation. On Woodstock’s charming main street, I pass other four-wheeled daytrippers: A yellow Lamborghini Huracan roadster; an Austin-Healey 3000 that, like other vintage convertibles, is a popular Boomer choice in these parts.

It strikes me that throughout America, destinations akin to these Catskills – where open space, peaceful cottages and healthful outdoor recreation are the main draw – are primed for an unprecedented tourist glut, as people forego the airport terminals and overcrowding of, say, Disney World or Las Vegas in favor of car trips to more sparsely populated spots.

I drive past nearby Big Pink, the now-rental house where Dylan recorded The Basement Tapes with Helm and his touring backup group that would soon morph into The Band. The Vantage flat-out shreds the wooded lanes of the Catskills, at a pace that quickly defies reason, the cannonades of its V8 echoing off guardian walls of spruce and pine. Two-piece ventilated disc brakes, with six-piston calipers up front and yawning 15.7-inch rotors, do their burly part. Yet for such an exotic beast, the Vantage is surprisingly practical, including a generous shelf behind the seats, and a 12.4 cubic-foot trunk that essentially matches the new C8 Corvette’s.

As much as I love driving here, for me the best part of the Catskills is roughing it during the day – with refreshing dips in waterfalls and better-kept-secret swimming holes – and then relaxing at night at impeccable, yet warm and unfussy restaurants like Sylvia, Peekamoose (whose Brooklyn-born chef Devin Mills trained at Le Bernardin) or the recently closed Bear Cafe. The latter historic property, the woodsy Bearsville Theater complex on the banks of the Sawmill Creek, was lovingly built in 1970 by Albert Grossman, Bob Dylan’s manager and founder of Bearsville Records, and partners including Janis Joplin and The Band. Should you choose, the “roughing it” can encompass some of the most challenging hiking terrain in America, such as the Devil’s Path, a notorious grind over eight separate peaks, with a Rockies-like 14,000 feet of total elevation change. It’s so treacherous that even experienced hikers set aside three days to cover its merely 23 miles. Driving the Aston is easy peasy in contrast, but there’s still rewarding effort involved. The Aston’s street-killing, track-worthy intent is underlined by a three-mode drive system – adjusting throttle map, transmission, stability control and that basso-profundo exhaust – with no “Comfort” mode, only “Sport,” “Sport Plus” and “Track.” The steering is bristling with feedback, the chassis supremely balanced. It’s the kind of sports car that likes to be grabbed by the scruff of the neck and flogged, and if things get out-of-sorts occasionally, all the better. I’d been on some of these same roads a few weeks ago in a $240,000 2021 Porsche 911 Turbo S, and it’s just a different experience. It may be faster than the Aston, as you’d expect from a 640-horsepower 911 with a Bugatti-like 2.6-second launch to 60 mph, but the Porsche is also a more-effortless, surreal traveler, as much spaceship as sports car. If you can afford either or both, the choice is up to you.

If I miss anything from the Vantage AMR version, aside from the unicorn-like stick shift protruding from its console, it’s the mechanical limited-slip differential that does a better job at streaming power to the pavement, even when the rear end is beginning to slide. This standard Vantage’s GKN-built electronic diff sometimes gives up and allows traction control to intervene, which in turn tempts the driver to shut it off entirely.

This being an Aston, there are other flaws and quirks. Most interior surroundings, including Saville Row-level tailoring on leather sport seats, appear suitably elite. But faux metal door pulls and plasticky air vents look like they wandered in from a much-cheaper car. The Comand-based infotainment system at least wandered in from Mercedes, but specifically Mercedes’ models from at least five years ago. Compared to Benz’ newer Comand and MBUX units, the thick-rimmed dashtop screen is the equivalent of a dusty Magnavox TV. Its rotary controller is another awkward retrofit in a console whose controls are strewn as randomly as Jackson Pollock’s paint drips. Oh, and the blind spots are a bitch, the suggestively low roofline and pinched glass constricting rearward views, though not as badly as in the Mercedes-AMG GT that shares its engine.

With Airbnb’s and dreamy boutique hotels like The Debruce temporarily closed by the virus, I’m forced to call it quits and head home when the sun sets over green-jacketed mountains. But I’ll be back soon enough – along with every other visitor who avoids the unfriendly skies, and chooses an old-school road trip instead. 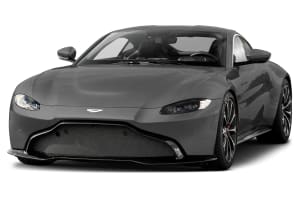