Well, this was inevitable. After kicking things off with what we'd drive in 1985 and then combing through the morass of automotive choices in 1975, our time machine has arrived in a true automotive golden era. Some would even consider it THE golden era. The number of truly classic designs and nameplates from 1965 are far too great to be fully represented by our editors' selections. After all, this was the first full year for the Mustang and as you'll see, no one picked it.

As before, we've chosen cars under two simple rules: it has to be a 1965 model year car and in terms of price, "Come on, man, just be realistic." So, these are the cars we'd drive in 1965. And in the comments, make sure to let us know (and show us) the cars you'd choose if transported back in time. 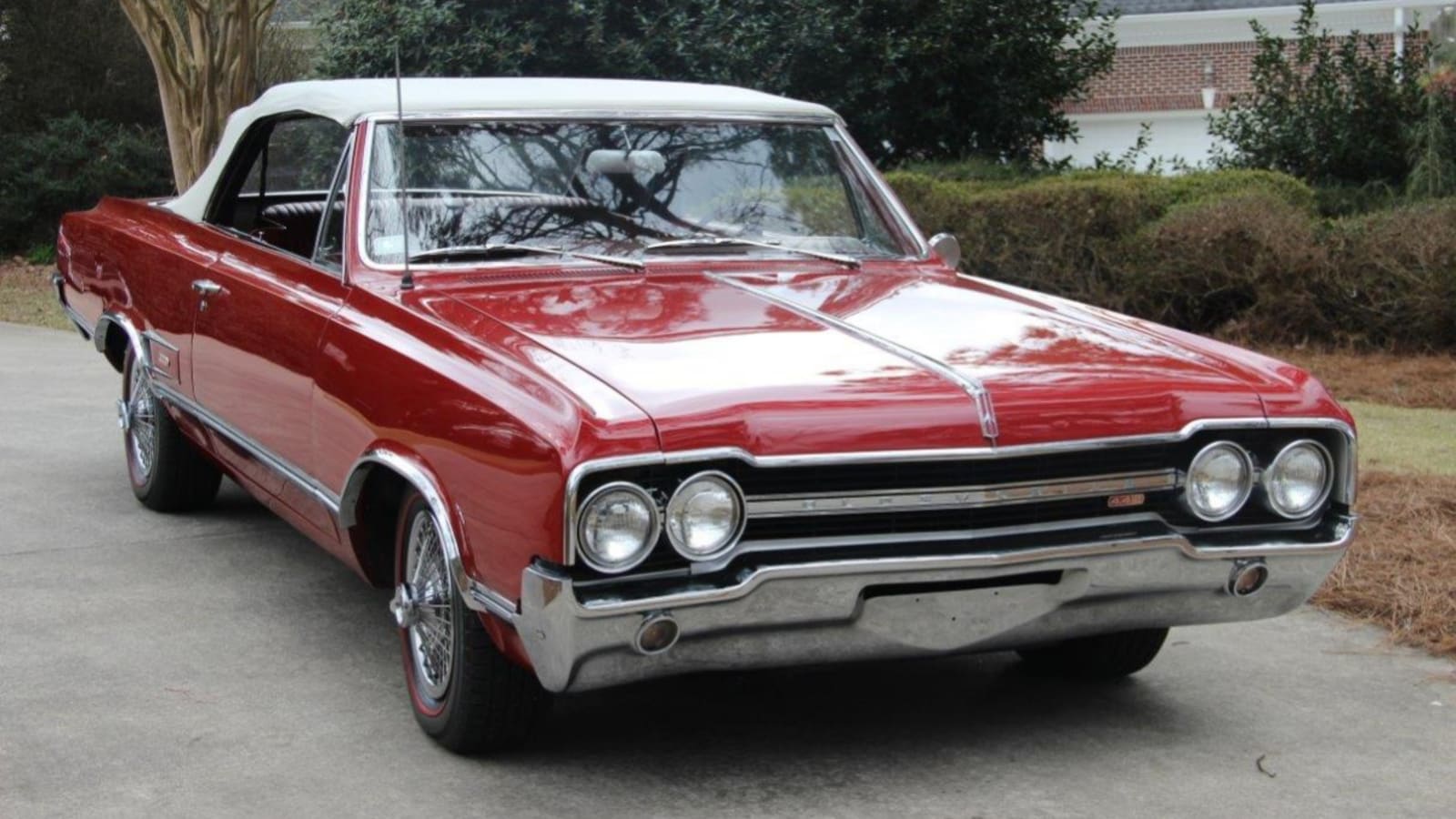 Senior Editor, Green, John Beltz Snyder: For the 1960s or early '70s, my grandmother would be ashamed if I didn’t pick an Oldsmobile. In 1965, my grandfather, John Beltz, was chief engineer at Oldsmobile, and the 442 was his baby. My mom told me stories of how their driveway in East Lansing and the adjacent roadway was painted with the peeled rubber of the cars he’d bring home, throughout the project. In the years before my mom died, she actually bought a 1967 Olds 442 convertible, which later lived in my own driveway in Ann Arbor for a time. My sister and I sold that car, and ever since, I’ve been telling myself I’d replace it with a Toronado, my grandpa’s other labor of love during his time at Oldsmobile. For 1965, I’m going with the closest thing to the one I actually owned (the '65 442 you see above went up for auction on Bring a Trailer), and enjoying rear-wheel-drive performance for a year until the Toronado comes out. 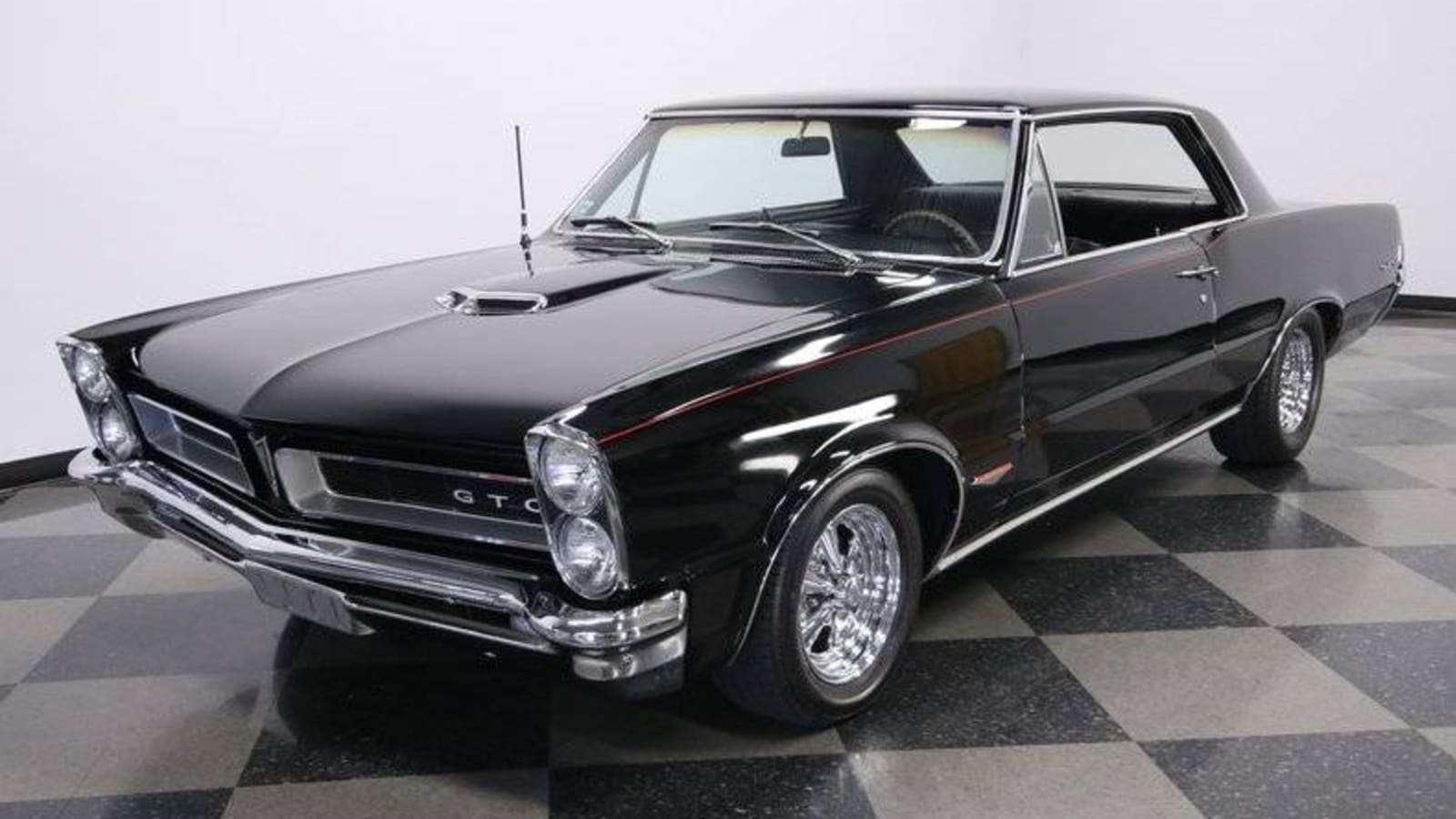 Managing Editor Greg Rasa: Mustang was too obvious, I guess. And I suppose a Mustang Shelby GT350 — Wimbledon white with blue stripes, of course — demolishes the "Come on, man, just be realistic" rule. For nostalgia, could've picked a 1965 Ford Fairlane 500, the car I learned to drive in (it was 10 years old at the time and trailed a cloud of rust everywhere it went), but there's nothing special about that.

So how about this: A 1965 Pontiac GTO. I really dig that particular year's body style — clean lines, open greenhouse with no B-pillar. Above all, it has that marvelous raked front end with the stacked headlights and Pontiac arrowhead, which gives it a fast, eager look. It's far preferable to either the '64 or '66, I think.

This one-owner example, for sale at Hemmings with 44,865 miles on the odometer, has the wood-trimmed steering wheel, power steering and brakes (in 1965 they were drums, so woefully inadequate), four on the floor with cueball shifter, and the 360-horsepower 389 V8 with the Tri-Power triple-carburetor setup. It's beautiful, right down to the Cragars. A GTO's high book is potentially $66,000 today, but back then its starting MSRP was $2,860, a few hundred more when optioned out. Which was less than six months of 1965's median U.S. salary, and under $24K in today's dollars. That's Corolla money. 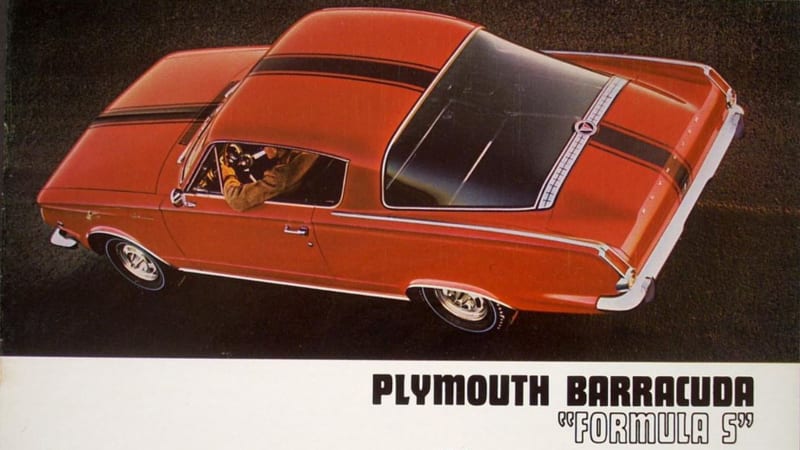 Associate Editor Byron Hurd: I've managed to select underdogs for each of our period lists thus far, so why stop now? I'm going with the '65 Plymouth Barracuda, specifically the Formula S with the 273 V8.

In a vacuum, the first-gen Barracuda isn't a knockout, but I think the design is pretty slick, and the huge, wrap-around rear window really stands out in a crowd. It won't light any fires under the Hemi-crazed Barrett-Jackson crowd, but I think it's an interesting pony car time capsule. 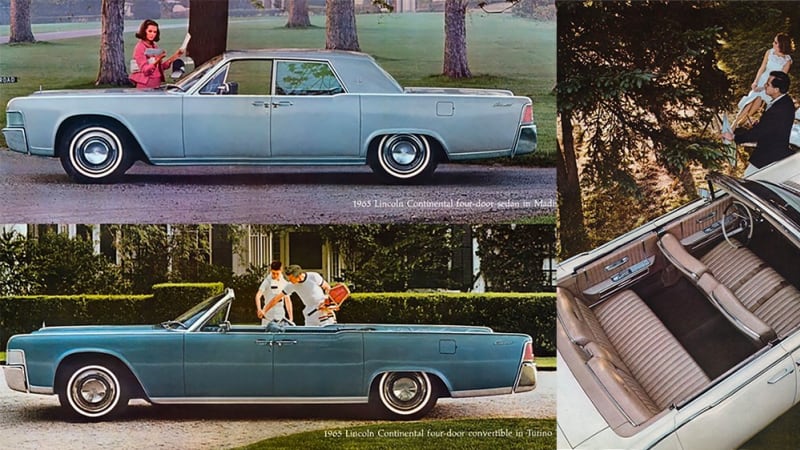 Consumer Editor Jeremy Korzeniewski: Picking a car for 1965 was just as difficult as it was for 1975, but for completely opposite reasons. Unlike '75, where choosing a decent new car meant wading through a nearly unending sea of mediocrity, the 1965 model year was a bumper crop for amazing machinery. I chose the Lincoln Continental, though it just barely skirts inside our "Come on, man, just be realistic" edict. According to my calculations, the Continental convertible's $6,798 price in '65 equals nearly $56,000 in today's money.

For that rather princely sum, I'd relish the Lincoln's buttery smooth ride, 320 horsepower and, more important, 465 pound-feet of torque, courtesy of its admittedly gas-guzzling 430-cubic-inch V8 engine. I'd appreciate its four-door convenience and impressively spacious interior, and would stow its massive folding soft top at every opportunity. 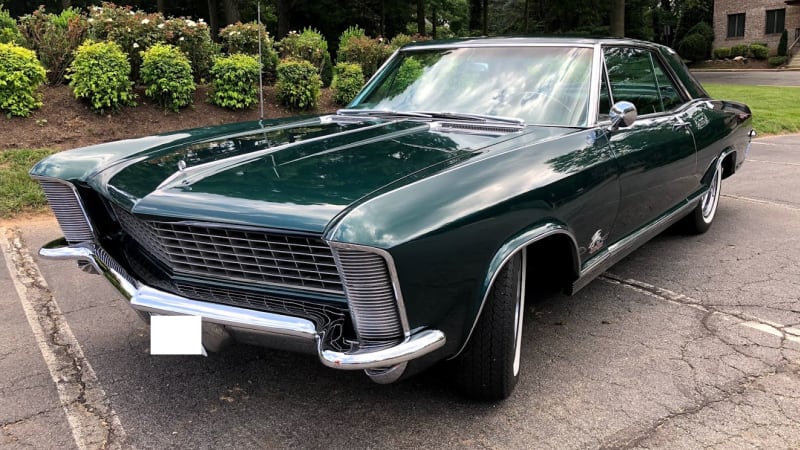 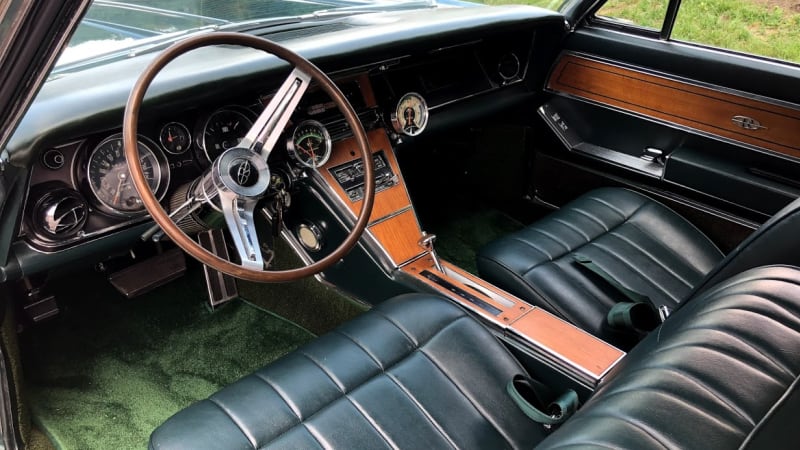 West Coast Editor James Riswick: This is pretty much the beginning of the muscle car era, yet there's another type of car that exploded in the mid-1960s: the personal luxury car. These coupes tended to be bigger, more comfortable and borderline luxurious than muscle cars, yet they routinely shared their engines — the bigger ones, too. Now, the segment would get completely out of hand (and awful) in the 1970s, but here in the mid- to late-1960s, there were true classics, including the Snyder clan's aforementioned '66 Toronado.

My choice is without question one of those classics: the 1965 Buick Riviera Gran Sport. Shockingly, this first-generation Riviera was sold for only three years, and some would argue it was only gradually downhill from there. This would be its final year, but it went out on top. The main reason is something that automatically scores points in my book: hidden headlights, which were stacked vertically behind doors in the leading edge of the fenders. So. Damn. Cool. Several other subtle-but-effective tweaks resulted in, as Hemmings wrote, "one of the most complete and notable American automotive designs in history." The interior is similarly distinctive and stylish (and how about that green-on-green color combo above sold a while back on Bring a Trailer?).

The other reason: This was the first year for a Riviera Gran Sport, which packed the 425 cu-in Super Wildcat V8, fatter pipes, limited-slip diff and the option of a firmer suspension, a 1-inch lower ride height and quicker steering. The base price for the '65 Riviera was $4,408, while the Gran Sport and ride/handling package would bring the total to at least $5,000 given a sprinkling of other options. That works out to $40,696, which seems vaguely realistic, man — especially considering that it would already certainly be much pricier today. 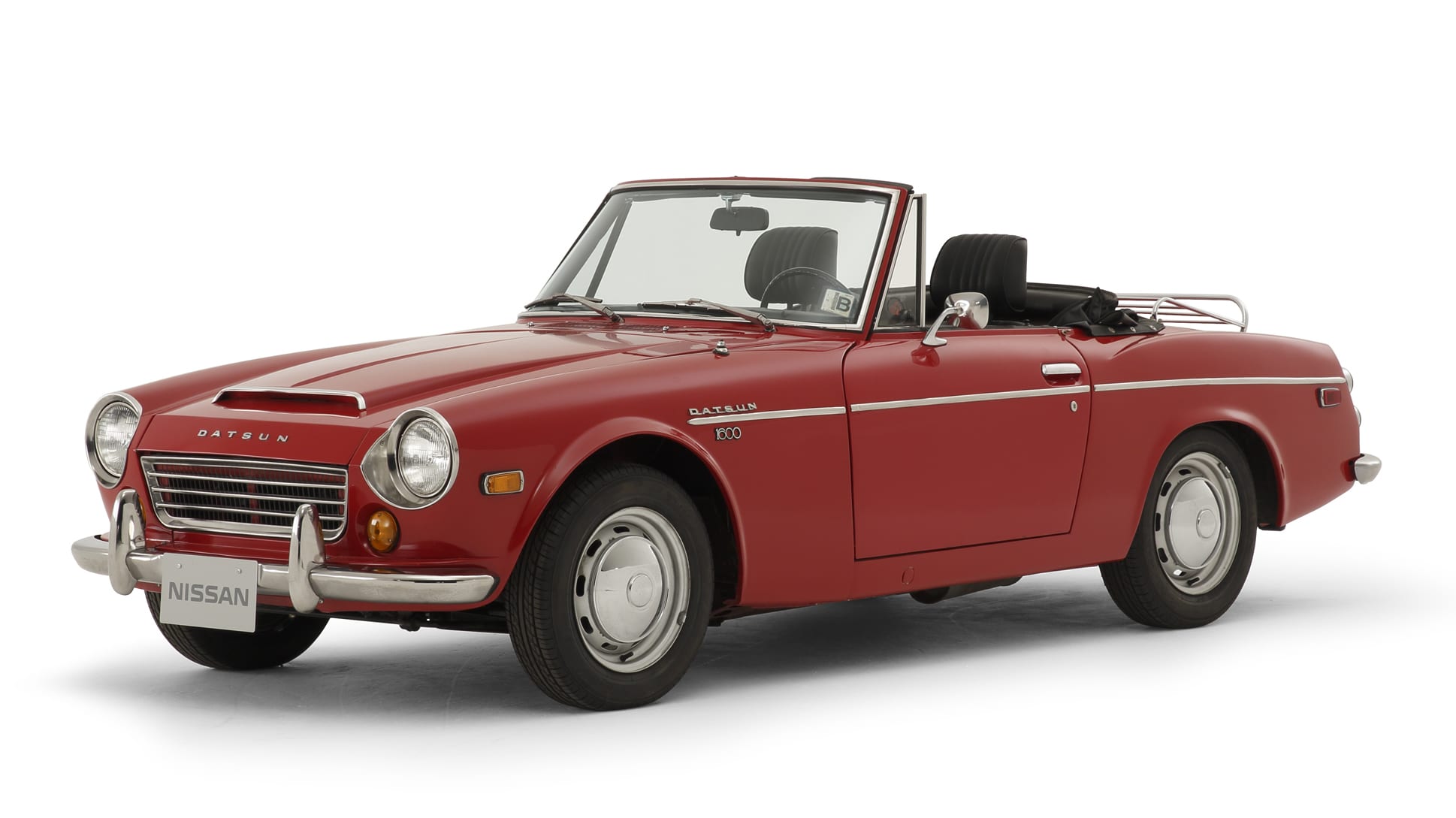 News Editor Joel Stocksdale: If you've been following Autoblog for awhile, you know I have a Miata and I love it to no end. And 1965 just happens to have a pretty direct Miata analogue. I'm not talking about something from the U.K. or Italy, though. I'm talking about the 1965 Datsun 1600 Roadster. It's a cute, light, rear-drive roadster from Japan. You can't get closer to the Miata than that.

It had pretty solid specifications for the time, too. Its 1.6-liter four-cylinder made 89 horsepower and 97 pound-feet of torque and came paired with a four-speed manual transmission. It also weighed only about 2,000 pounds, so it should be sprightly. Admittedly, I would be tempted to trade up to a later Datsun 2000 when it launched a couple years later, as it could be had with around 135 horsepower, nearly the same as the 1.8-liter NA and NB Miatas. Still, the 1600 would be fun in the meantime, and hopefully, being a Nissan product, it would be more dependable than its European competition. 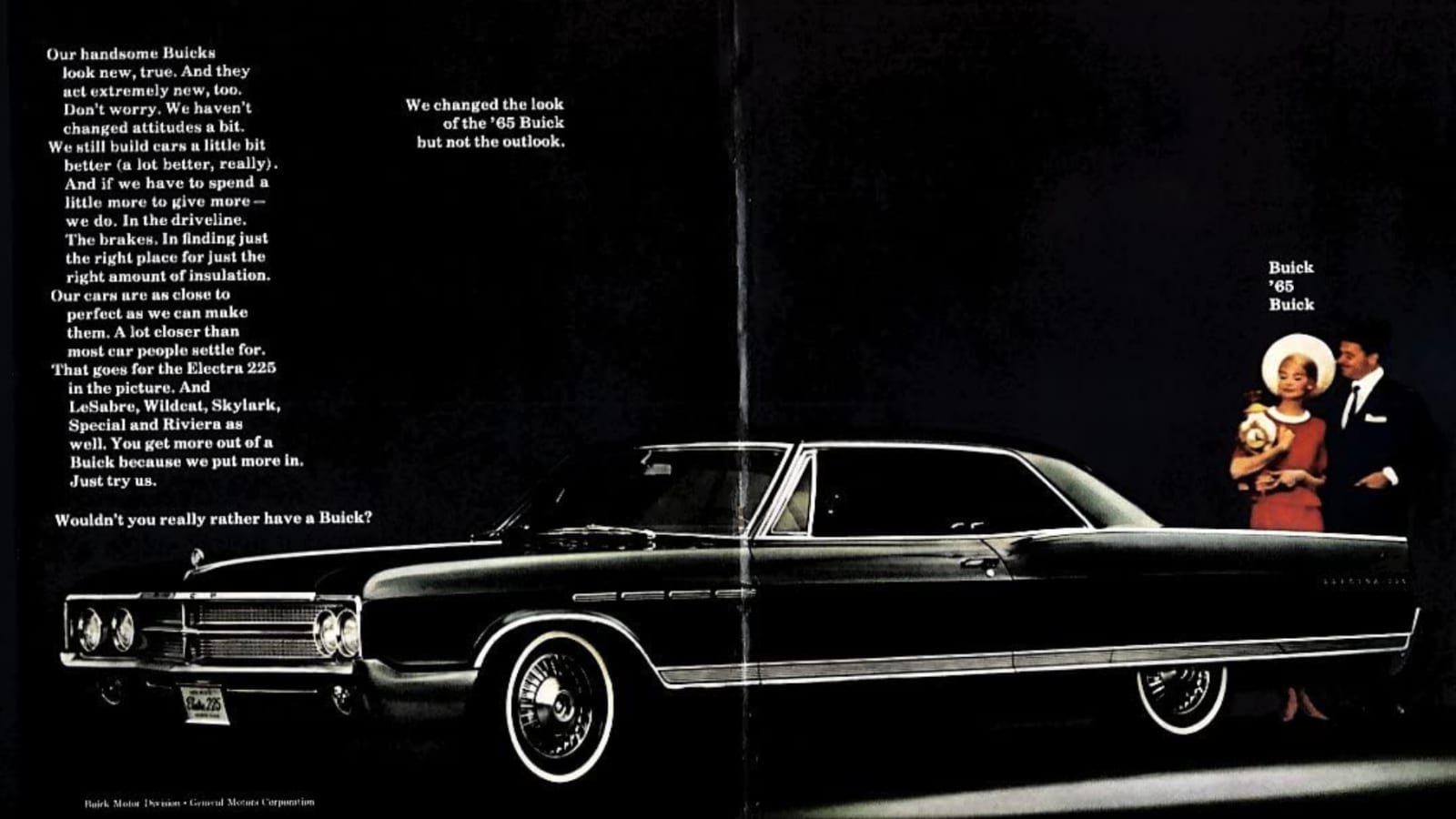 Road Test Editor Zac Palmer: Sign me up for a 1965 Buick Electra 225 Sport Coupe. It may have only been 224 inches long, but my goodness. Just look at this car. I could’ve sprung for any number of hotter cars, but I’m thinking that style would’ve been my priority back in 1965. A two-door coupe that’s as long as a modern-day Escalade ESV is hilarious but oh so cool.

Plus, doesn’t the advertisement above sell this Buick enough? This new Buick is new and true. At $4,265 in 1965, it was a bit expensive. In 2020 money, that equals out to $35,000. Frankly, that feels like a steal for this long and low beast of a coupe. I have no spectacular story as to why I’d take the Electra. You could blindly point at a wall of 1965 GM vehicles and likely come up with something intriguing. I’m on the younger side of the Autoblog staff, so my choice has even surprised me. The Corvair Corsa was definitely high on my list with its rear-engine turbocharged flat-six, but I want to cruise around in something that exudes class, and the Electra 225 Sport Coupe is undeniably that car.

Wouldn’t you really rather have a Buick? Why yes. Yes I would. 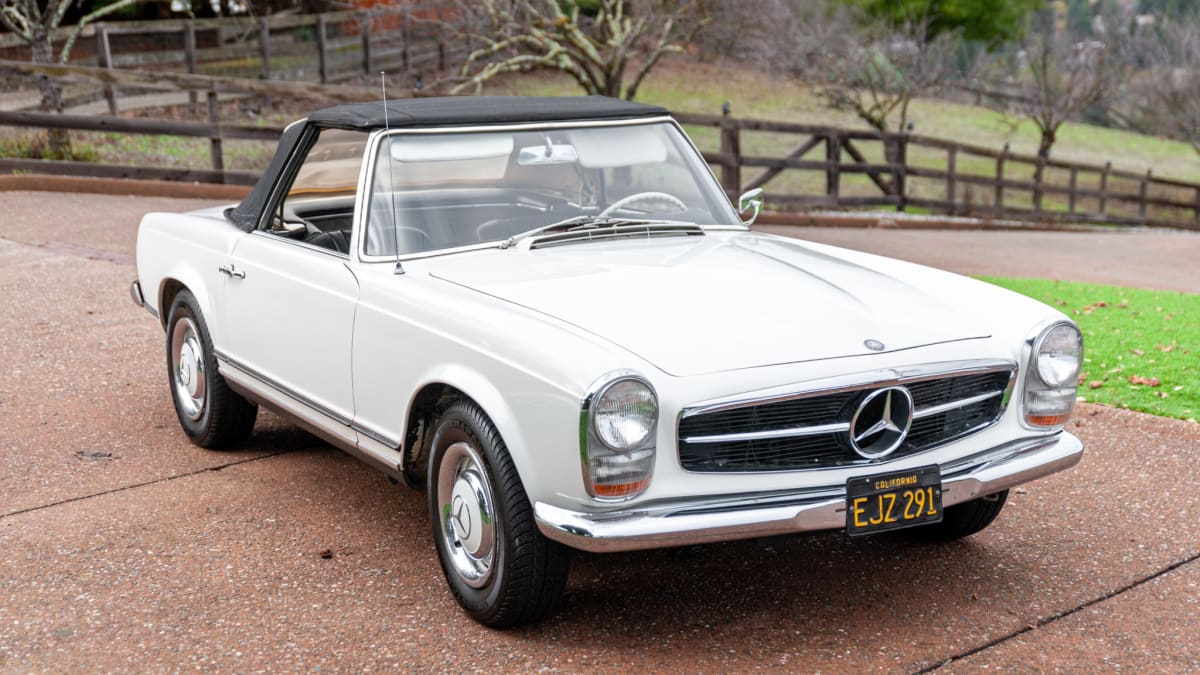 Editor-in-Chief Greg Migliore: After parsing through the 1985 and '75 lists filled with mediocrity, it's a little overwhelming to pick from one of the most memorable periods in automotive history. Truthfully, '65 isn't my favorite year. If I were picking cars from this decade, I'd go for a '62 Cadillac Coupe de Ville (Don Draper's car in the early seasons of "Mad Men"), a '62 Ford Falcon Futura (my mom's first car, in turquoise) or a '69 Charger.

I digress. For 1965, I'd go off the board and opt for a Mercedes-Benz 230 SL, like this one on Bring a Trailer. It's a gorgeous car. I did drive a 1962 SL convertible one time in Spain, and that car turned me on to this era of Mercedes. The 230 had an inline six that certainly wouldn't rip your head off with 150 hp, but it had some juice. It could be paired with a four-speed manual or automatic transmission. Having driven a few manuals from this era, I'd probably take the auto in 2020. This is a beautiful car that gets the details right, from the wheel covers to the headlights. The clean silhouette was in keeping with the boxier designs of the '60s, which I tend to prefer over the crazy fins and curves of the '50s. I'd like to think I'd have driven a 230 SL in '65.