The Sienna is all new, and it looks promising

There’s a new minivan on the block. It's the 2021 Toyota Sienna, and the van is totally new from the ground up. Toyota hasn’t given us a fresh new Sienna since the current-generation hit the roads for the 2011 model year, so this one is a long time coming. The big news here is the single hybrid powertrain choice Toyota is introducing to the new Sienna. There will be no gas-only option, and there will be no PHEV “Prime” option either.

We’ll get into powertrain specifics in a second, but the Sienna’s new design inside and out is another huge change. Toyota describes it as a minivan with SUV styling characteristics. One look at RAV4 sales is all you need to know why Toyota wanted to make the Sienna remind people of SUVs. Still, the traditional minivan shape is still very much intact with the short hood and long boxed-off body. The muscular flair and lines arcing down the side, though … that sculpting gives this minivan a much more crossover-like look and an air of aggression not seen in the minivan market today. As we bend around to the back, those taillights catch our eye immediately. The way the bottom black trim piece droops sharply downward, it reminds us of the Atlanta Falcons logo. That rear hatch is full of curves and things that pop out at you, too. The little tail that juts out above the “Sienna” logo even reminds us of the Supra’s tail. Bravo, Toyota.

Straight line acceleration may not be quite as exhilarating as the design portends, but we’re left to guess at 0-60 mph times. The new Sienna will be offered in either front-wheel drive or all-wheel drive variants. Both have a 2.5-liter naturally aspirated four-cylinder under the hood and two electric motors up front, but the all-wheel-drive version adds a third electric motor to power the rear wheels. Total system output is 243 horsepower, and Toyota is expecting the van to return 33 mpg combined. Unfortunately, Toyota decided to pass up on the opportunity to make a PHEV. The company says that it considered many different powertrains, but ultimately settled on the standard hybrid route. A Chrysler Pacifica Hybrid will remain the only plug-in hybrid you can buy in this segment, which is a huge plus for the Pacifica.

Toyota decided to build the new Sienna off the TNGA-K platform, which is the same platform as the new Venza, Highlander, RAV4 and others. The latter two experienced big boosts in refinement, comfort and agility. We suspect the Sienna will be a decent driver for the segment, especially in all-wheel drive form. In standing starts, Toyota says it can send up to 80 percent of the driving force to the rear wheels. Putting it in Sport mode even unlocks a boost from the hybrid system to improve acceleration response. Toyota is also using the electric motors to aid cornering with the aim to reduce understeer. 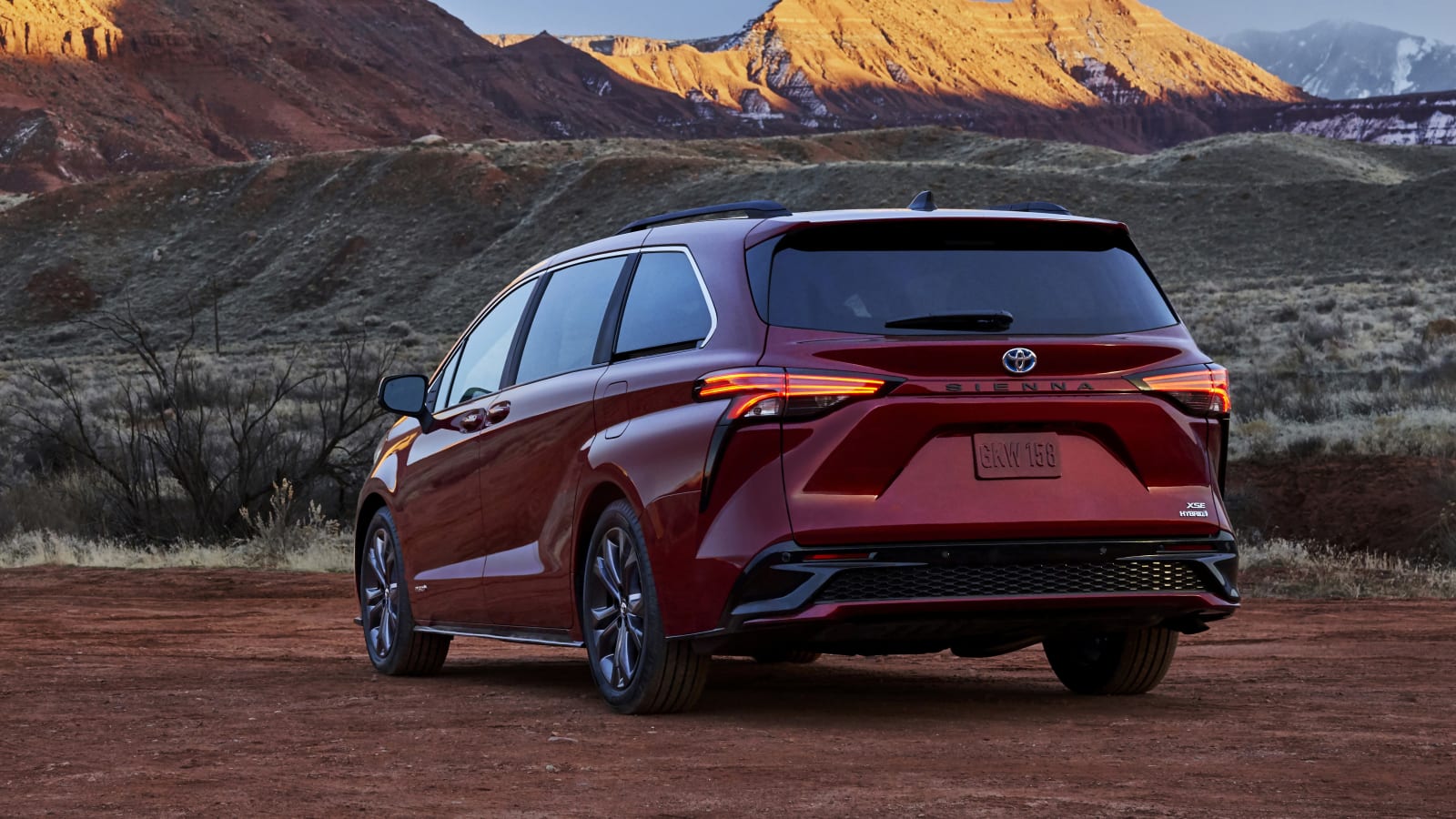 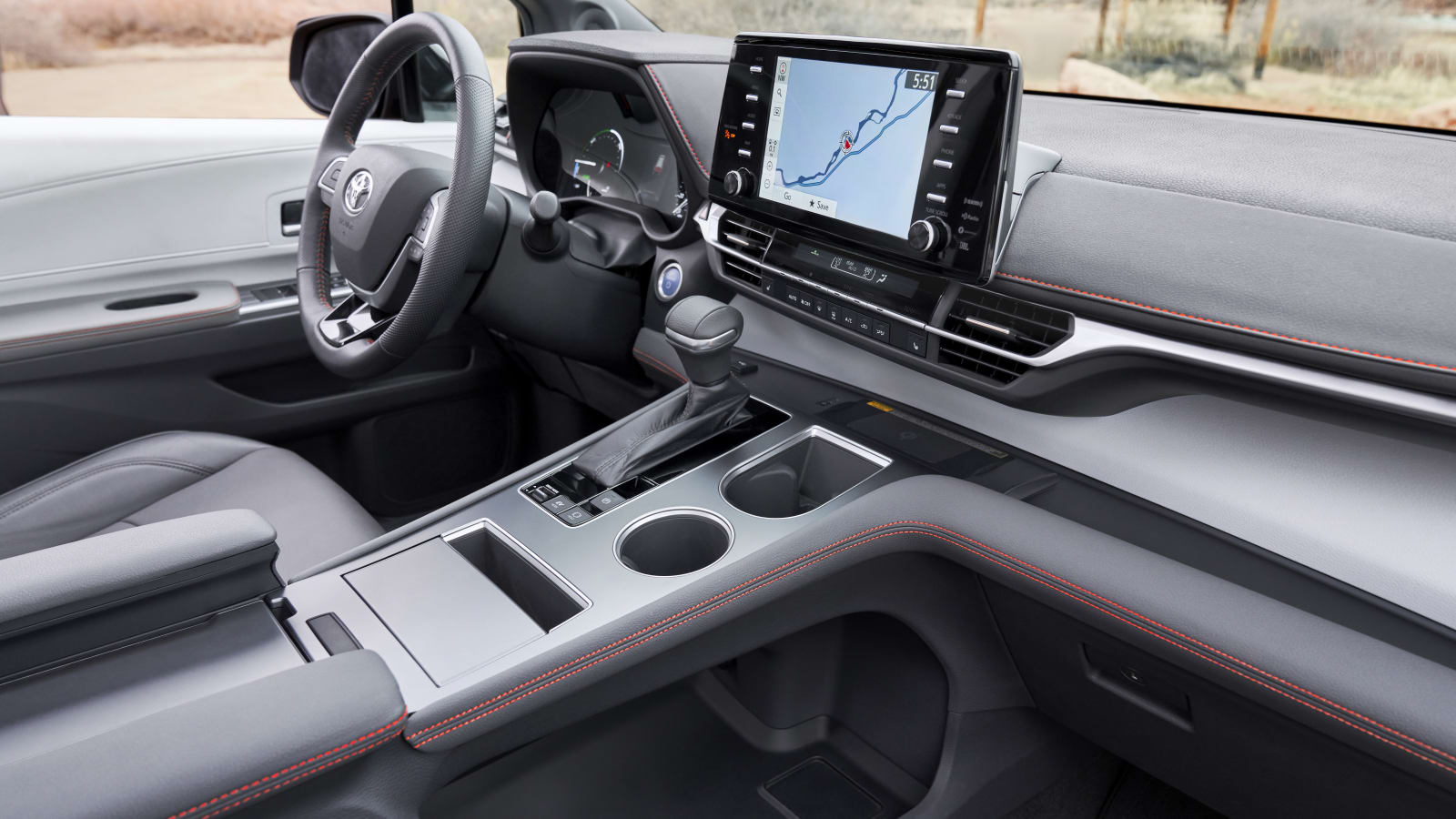 There’s going to be an XSE model available for anyone who wants a real sports van, too. Toyota tunes this van’s suspension differently, making it stiffer and lower for better handling. There’s no additional horsepower, but the massive grille and 20-inch wheels give it a seriously sporty look. Toyota’s design team even went so far as to say that it’s made to look at home on a race track. Call that mission accomplished.

We’re hopeful about the new interior design, too. The old Sienna is really looking its age at this point, but the new Sienna brings this van screaming into the new decade. A totally new bridge console structure dominates the front, and it is likely to be controversial. Toyota says it wanted to make the interior experience less upright and bus-like. This bridge makes the interior look more like a low-slung sedan or crossover, an abrupt departure from the normal wide-open minivan look. All the space you’re used to seeing up there is now under the “bridge.” You can store a bag or purse underneath, while your phone sits on the wireless charger up top next to the cupholders (of which there are 18 throughout the van). We’ll reserve final judgement for when we can actually crawl around inside the van, but it looks like ultimate utility has taken a backseat to design for the front passengers. Toyota has left no doubt that it’s in possession of the most stylish minivan interior, though. 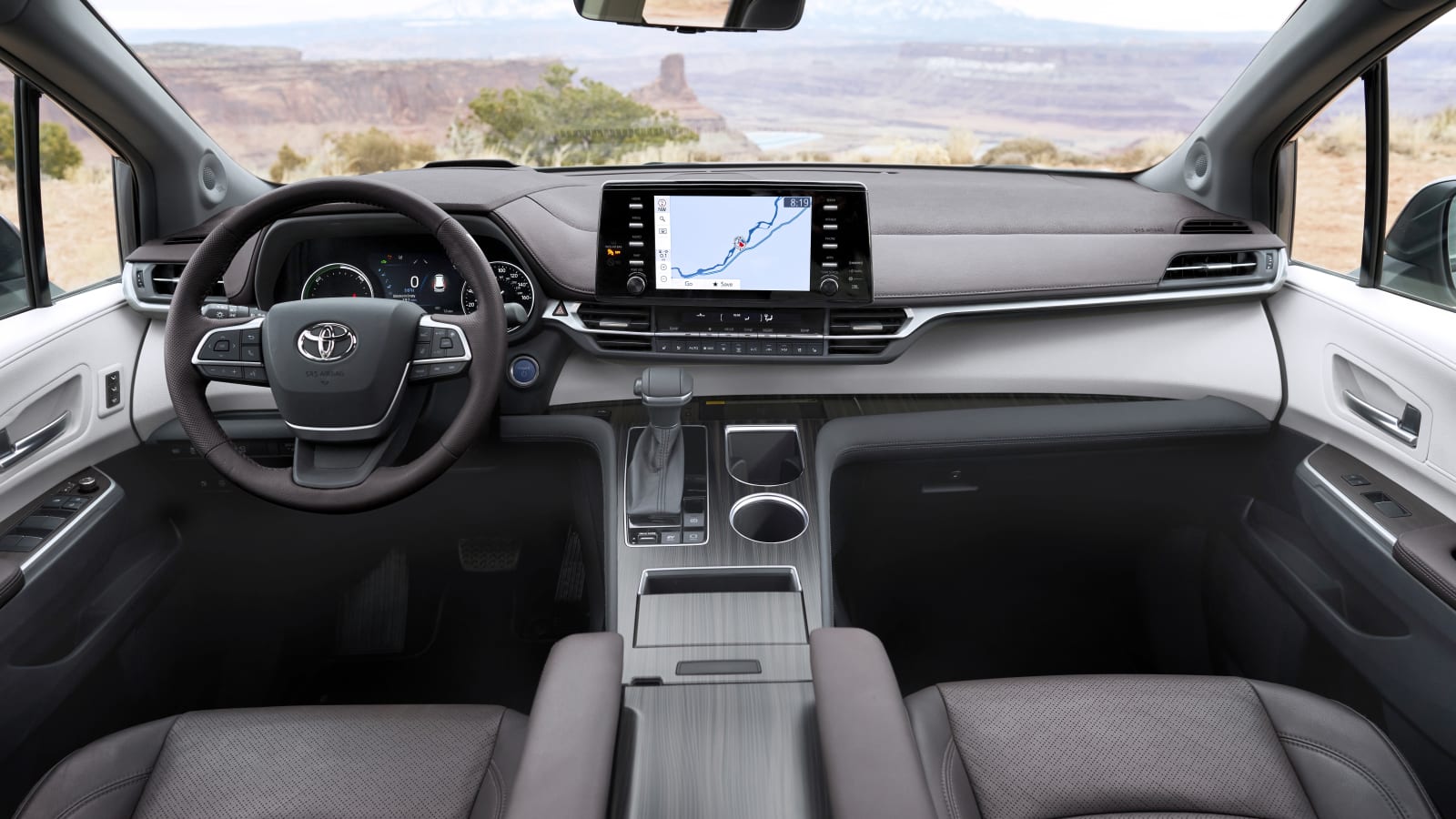 Sitting atop the bank of climate controls is a standard nine-inch touchscreen infotainment display. It’s not the big 12.3-inch screen seen on other Toyotas, but it’s still looking large up there. Android Auto, Apple CarPlay and Amazon Alexa are all standard. You get seven USB ports throughout the van. Other notable tech features (some optional or trim-dependent) include an available head-up display, the same Predictive Efficient Drive system seen on the new Venza, a digital rearview mirror, vacuum cleaner, refrigerator and a 1,500-watt inverter. Toyota has also included its current roster of driver assistance systems as standard equipment. You get adaptive cruise control, lane-centering assist, blind-spot monitoring with rear cross-traffic alert and many others, including a new rear seat reminder that will remind you to check the back upon getting out of the car.

The 2021 Sienna also has an upgraded second-row seat, which features either two or three seats (the difference between the seven- and eight-passenger versions, respectively). The outboard chairs now come with side airbags, which is unique for the minivan segment, but their placement does mean the seats themselves cannot be removed from the van. On the upside, the seats slide even further fore and aft than before (25 inches to be exact), allowing for plenty of extra space for cargo as well as a colossal amount of second-row legroom. All that aft-ward travel also gives the La-Z-Boy-style footrests available that much more room to operate.

There’s no price tag on the 2021 Sienna minivan yet, but Toyota says it will go on sale toward the end of the year. 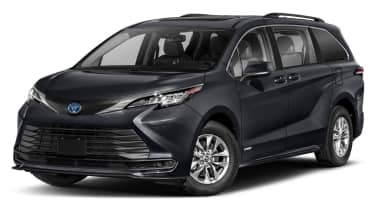 $196 - $945 Nat'l avg. savings off MSRP
See Local Pricing
I'm not in the market for a vehicle at this time. Please move this suggestion to the side for 30 days.
Huge Savings