A refrigerator-white Swedish station wagon with rear-wheel-drive and a 5-speed manual transmission. What's not to like? Because Volvo 240s tend to keep running for many years, because so many 240s were built during their near-20-year production run, and because Volvo 240 owners love their cars enough to keep them alive, plenty of these squared-off Swedes remain on the street to the present day. That means used-up examples of the 240 continue to flow into the big self-service car graveyards I frequent, and this options-loaded, medium-high-mile 240 wagon in Colorado seemed worth documenting. 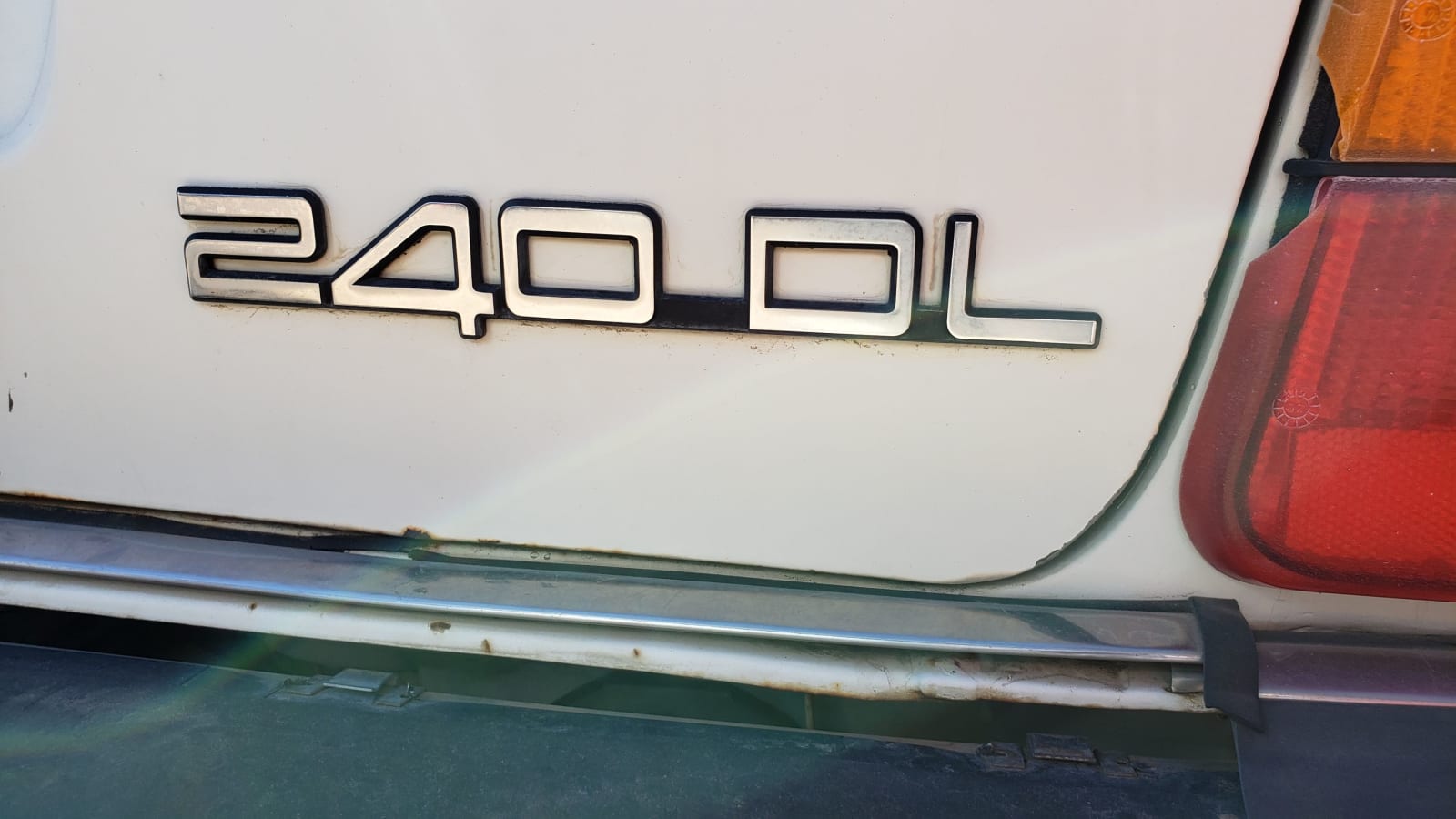 Just as everyone who cares about old Volvos today refers to the Amazon by its Swedish-market name rather than its American-market name (122S), so does every Volvo freak refer to any 240 wagon as a 245, regardless of the badging Volvo happened to have used in that model year. If you care about being exact, all US-market 240s were badged with "240" followed by the trim level from the 1986 through 1993 model years, no matter how many doors they had. The DL trim level was the bottom-of-the-line one in 1987. 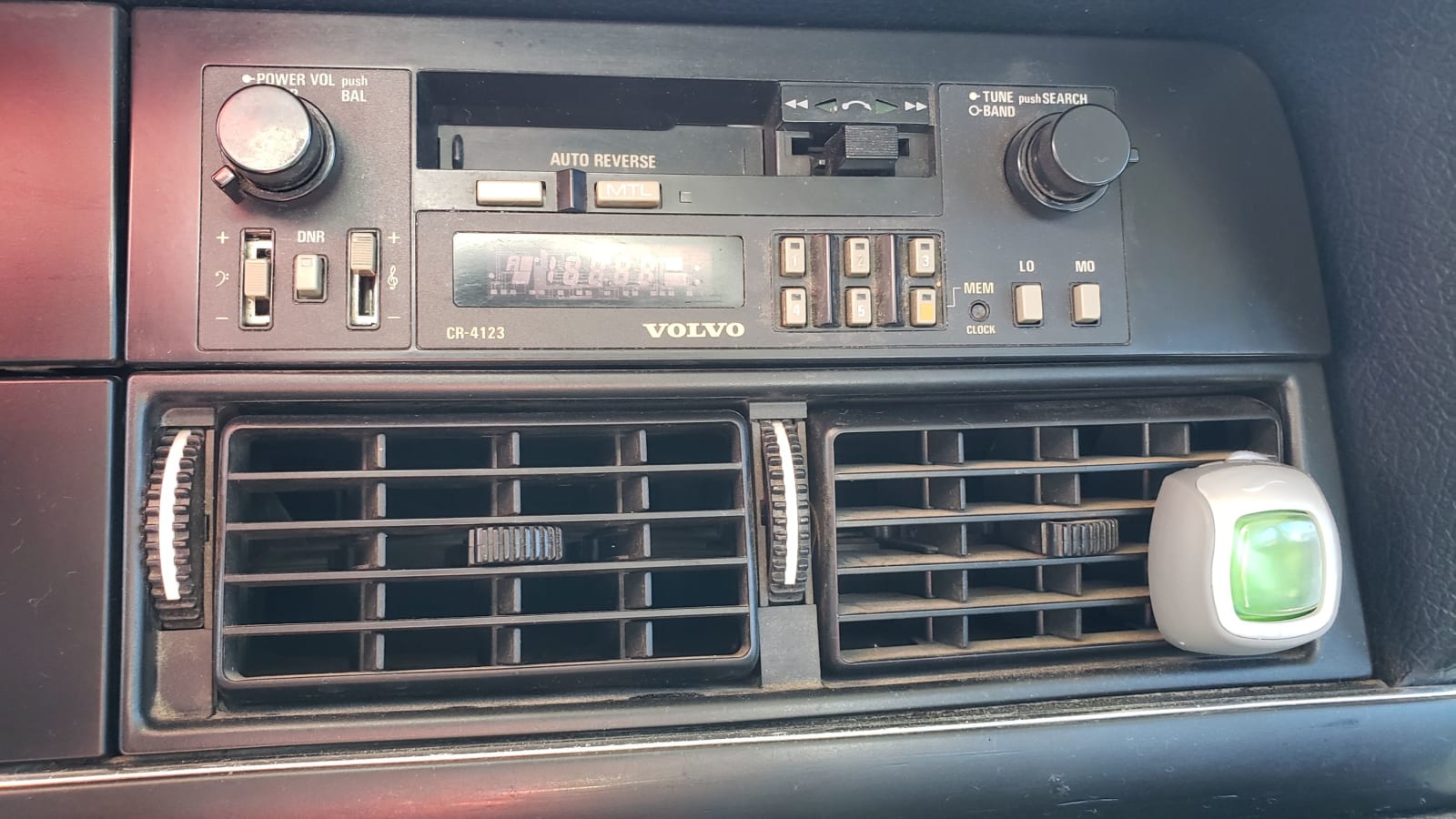 This car got some nice optional features, despite being a lowly DL with three pedals. Look, an AM/FM/cassette stereo with digital display! 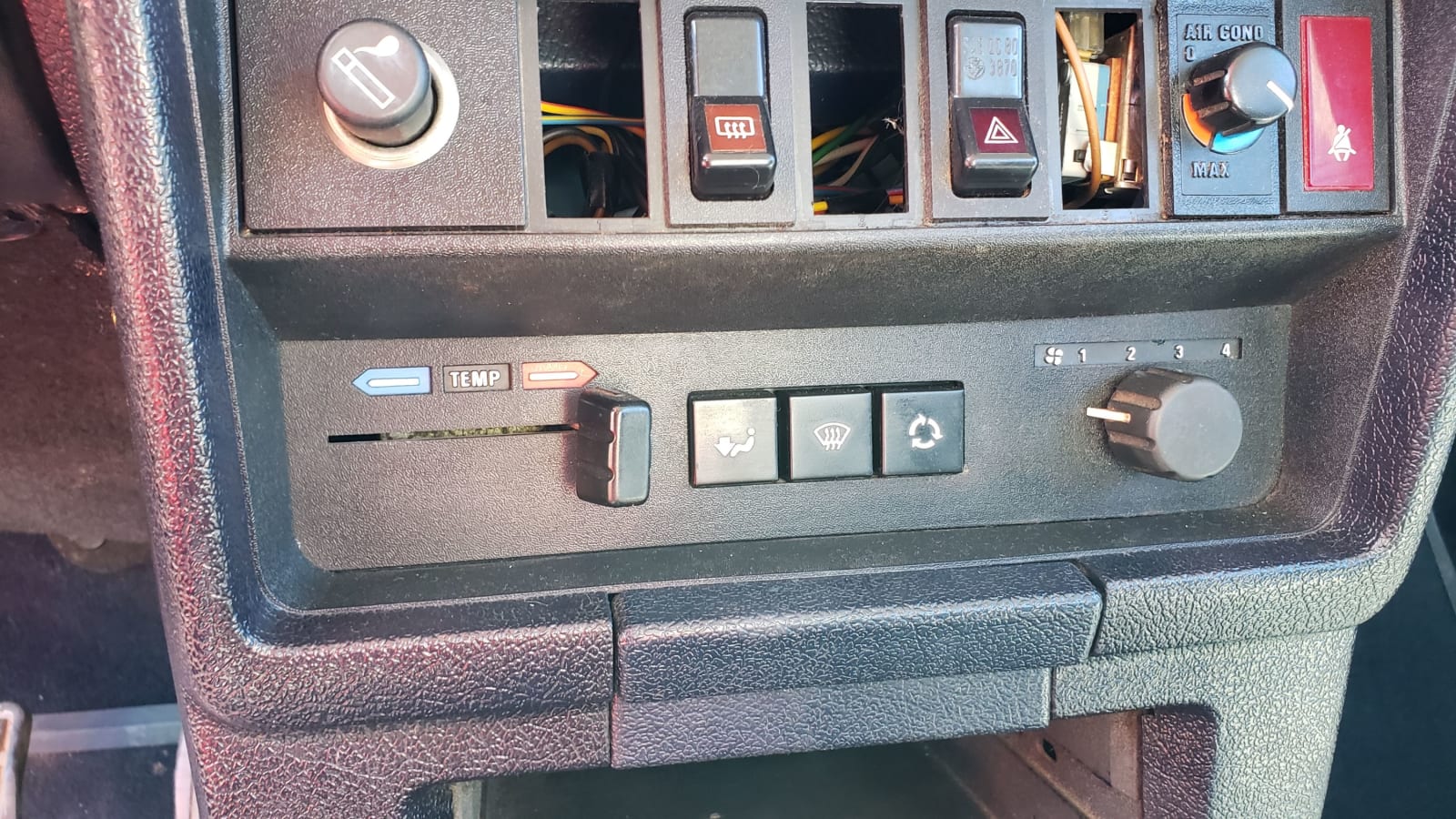 It also has factory air conditioning, which many Volvo buyers saw as a frivolous waste of money and gasoline, even as late as 1987. 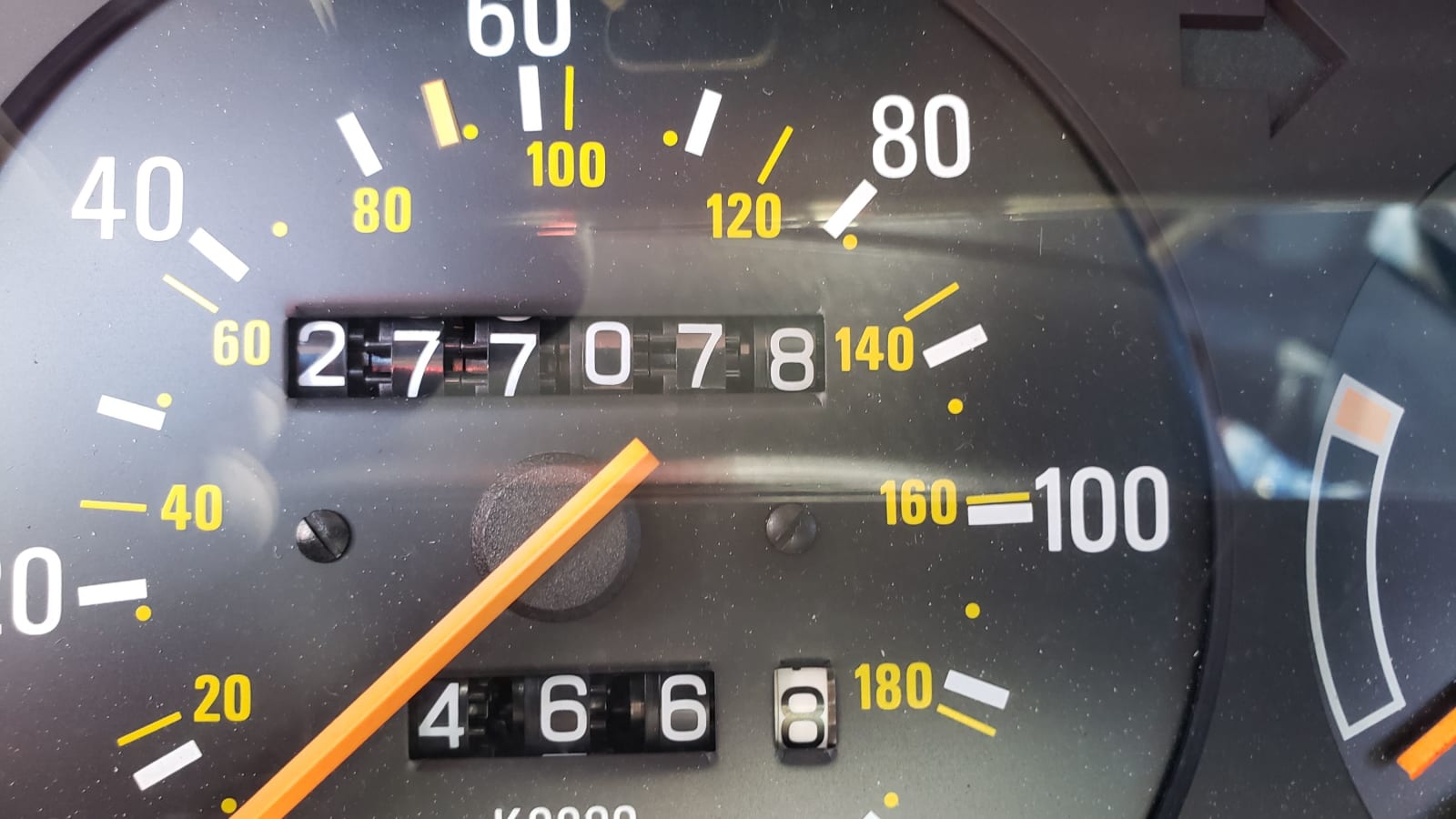 This mileage figure is fairly typical for 240s of this vintage, though I've seen plenty of junked Volvos with far more miles on the clock. 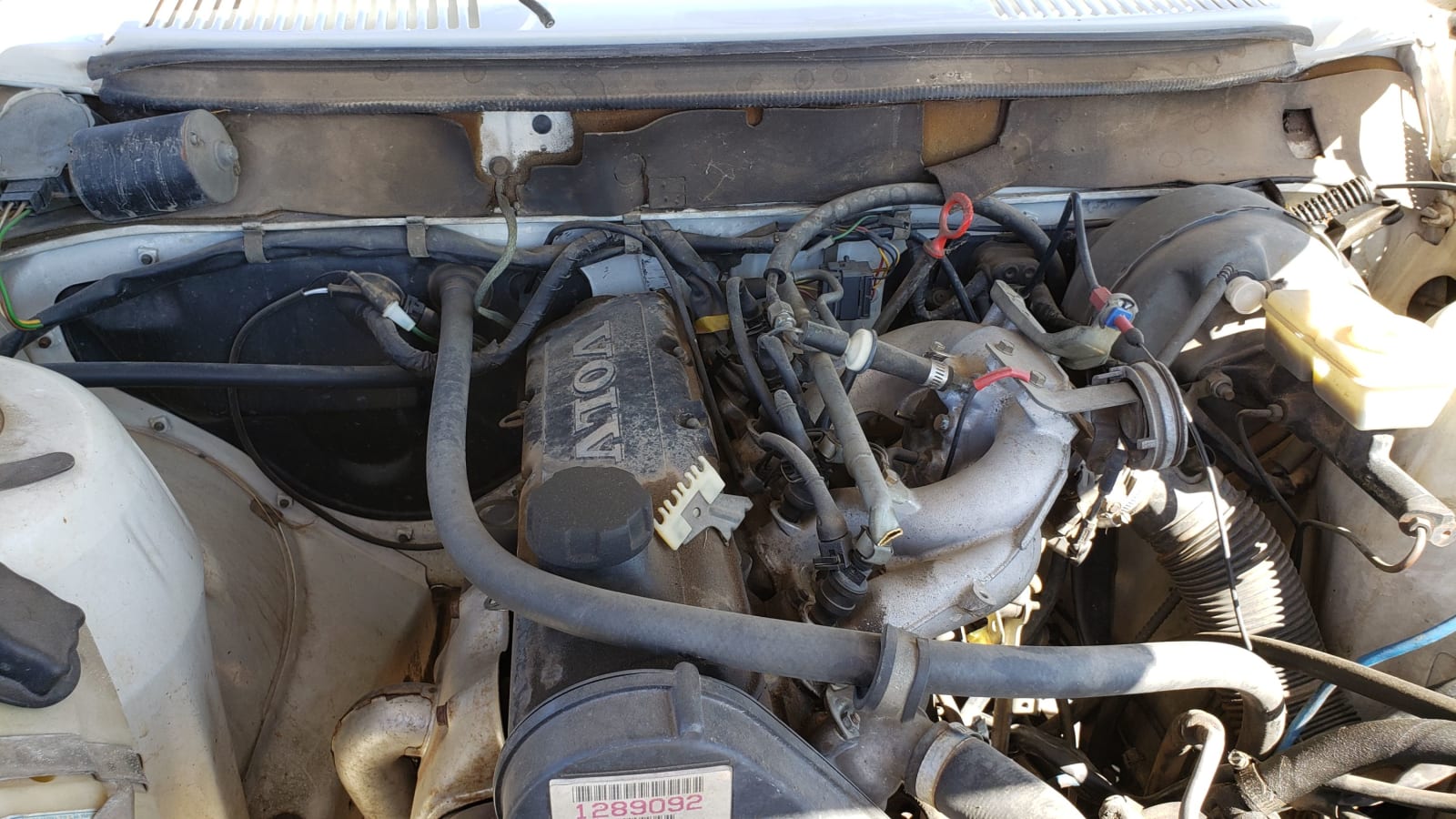 This 2.3-liter, naturally-aspirated B230F straight-four made 114 horsepower in 1987. These cars didn't weigh as much as you might think (the boxy shape gave the impression of great bulk), just over 3,000 pounds in the middle 1980s, so they weren't as slow as that power number might suggest. 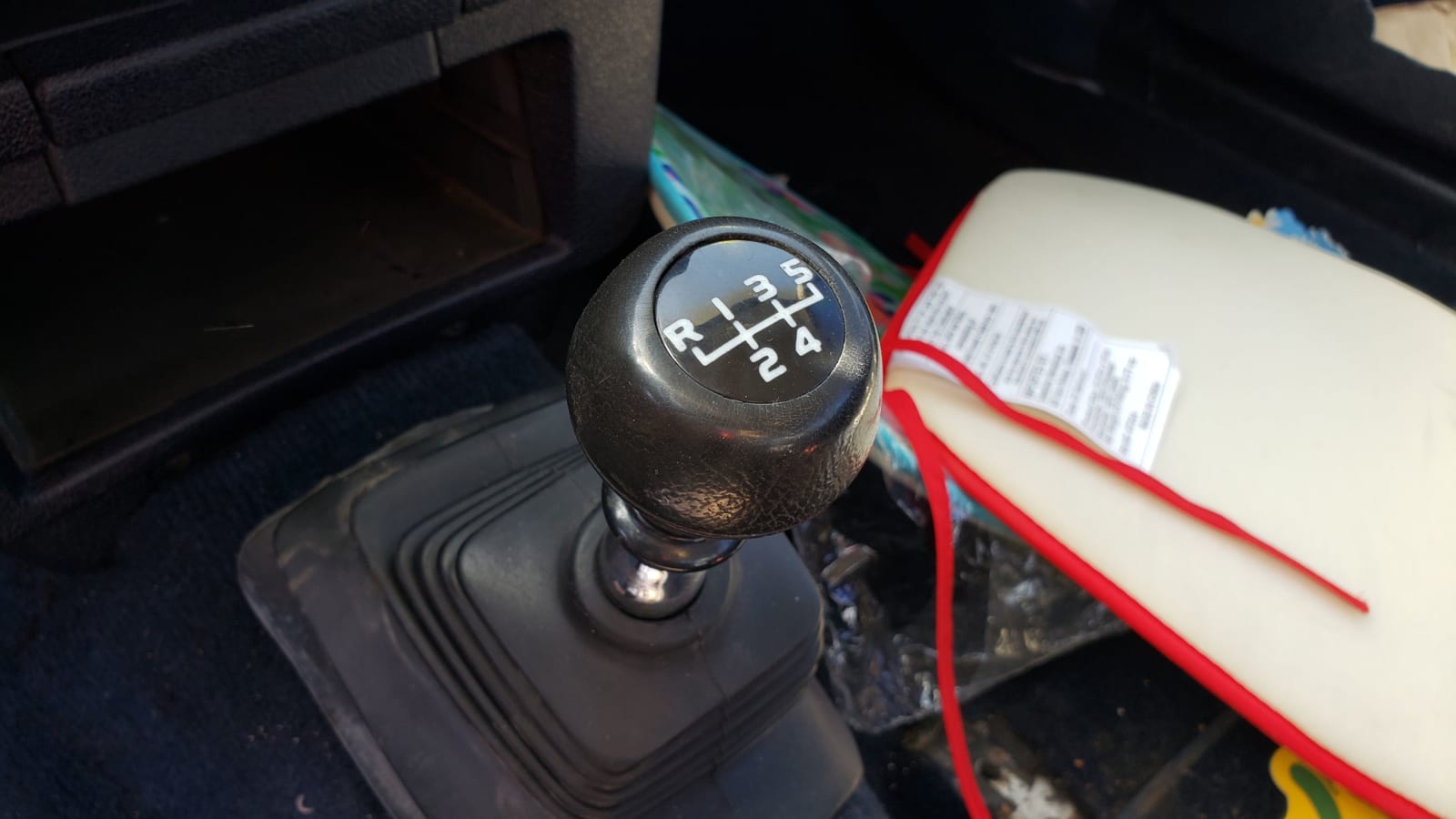 The slushboxification of the American driving public had made great advances by 1987, but a good-sized minority of 240 buyers still opted for the manual transmission. Sadly for this car, selling a high-mile (non-sporty) vehicle with three pedals can be nearly impossible. When someone trades in a non-turbo 240 with a manual at a dealership, its junkyard fate is all but assured. 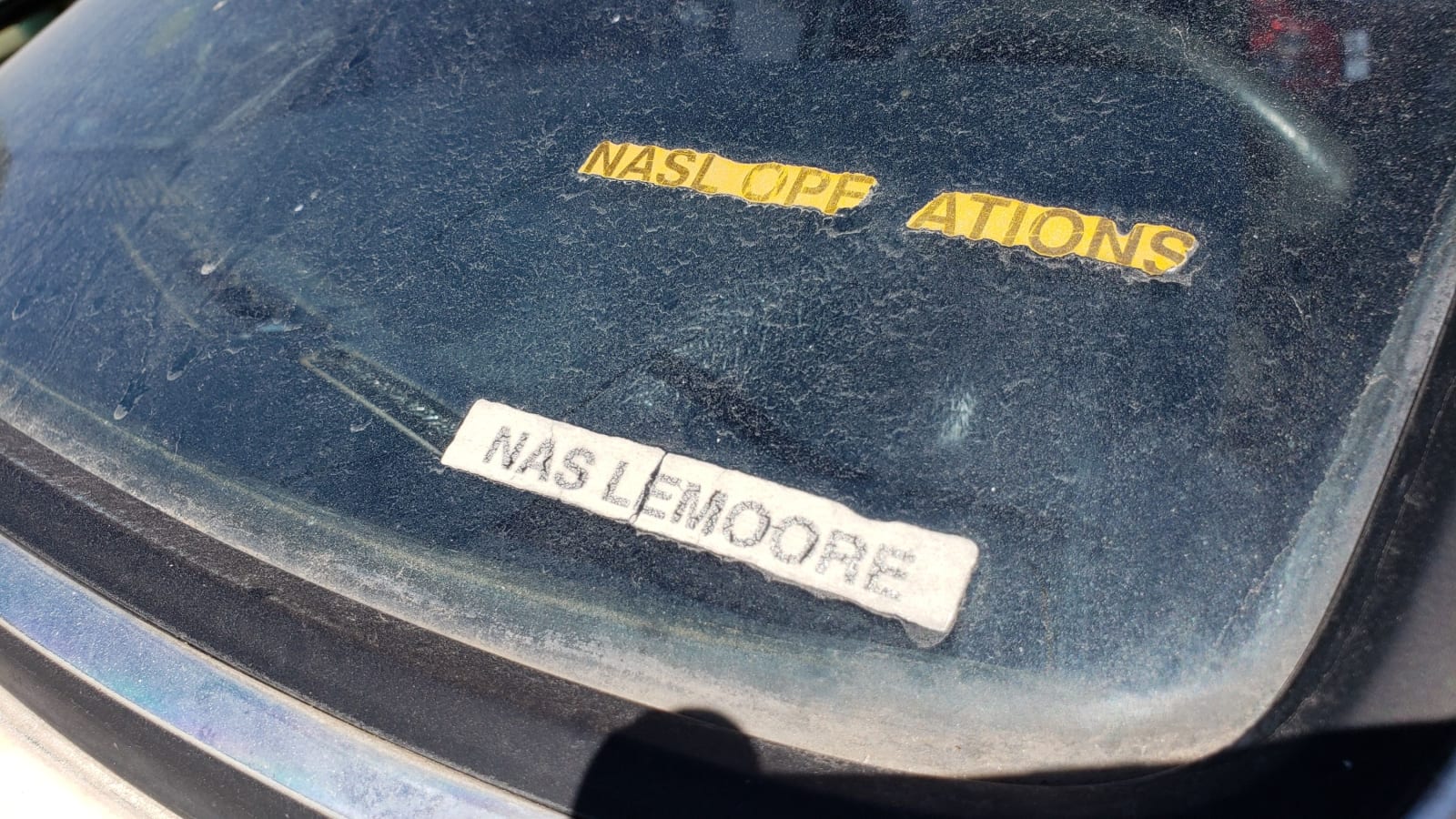 Many years ago, the owner of this car served in the Navy at NAS Lemoore in California's Central Valley. I see many military parking permits on the vehicles in this Colorado Springs yard, but most of them came from nearby Fort Carson. When I visit the Pick-n-Pull in Fairfield, California, the military permits tend to come from just-next-door Travis Air Force Base. 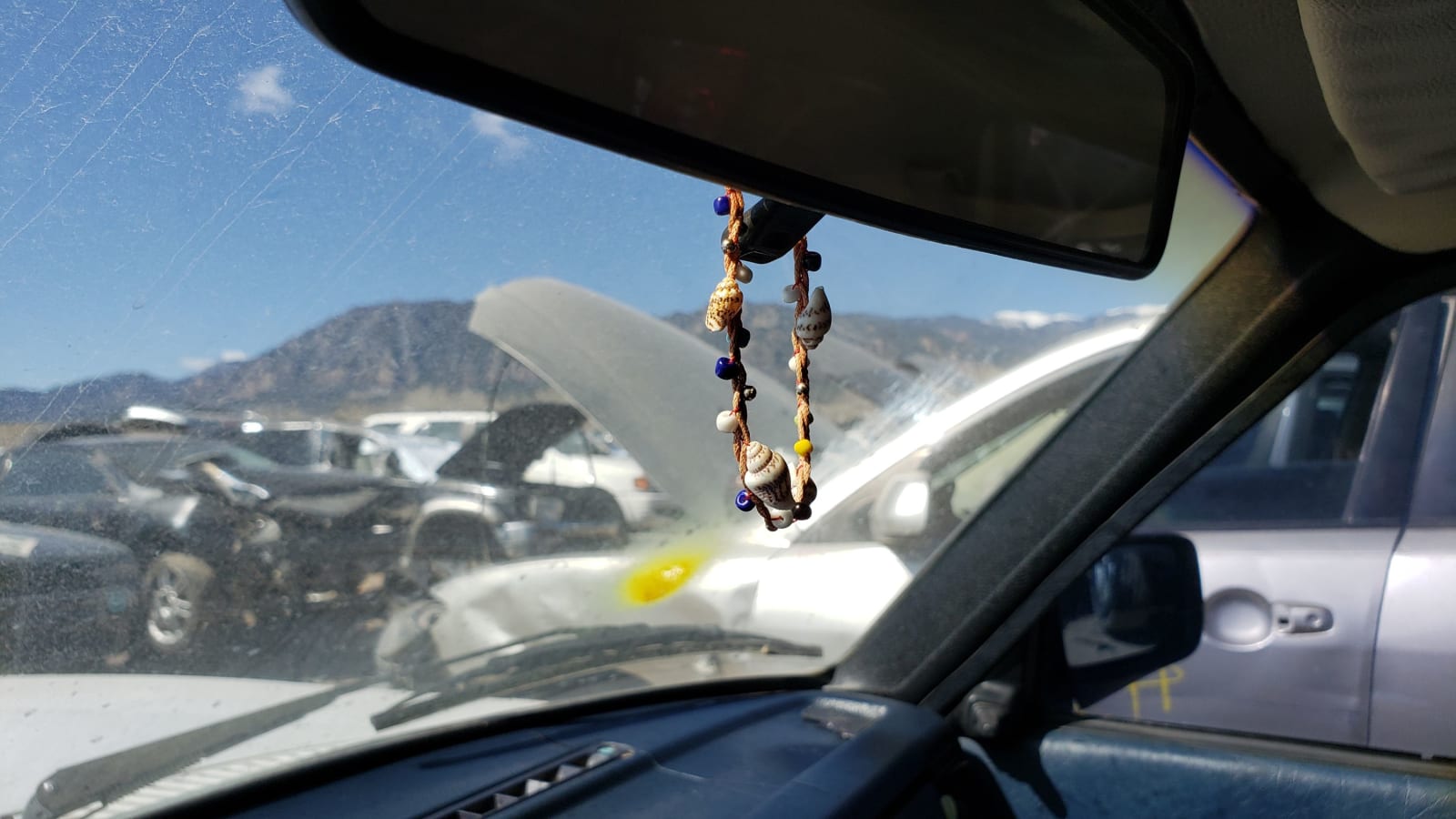 This shell-bead necklace will go to the crusher with the rest of the car. 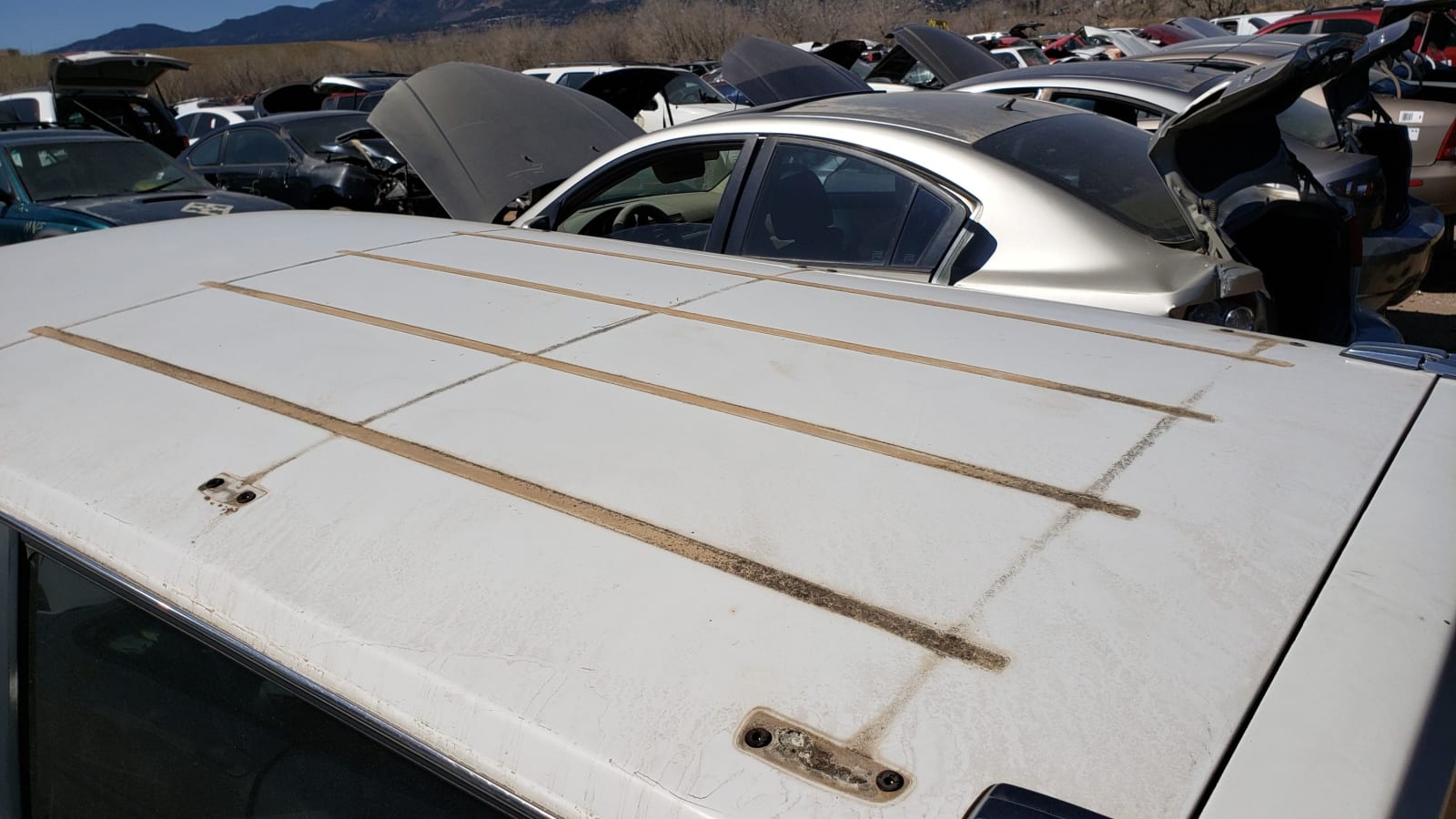 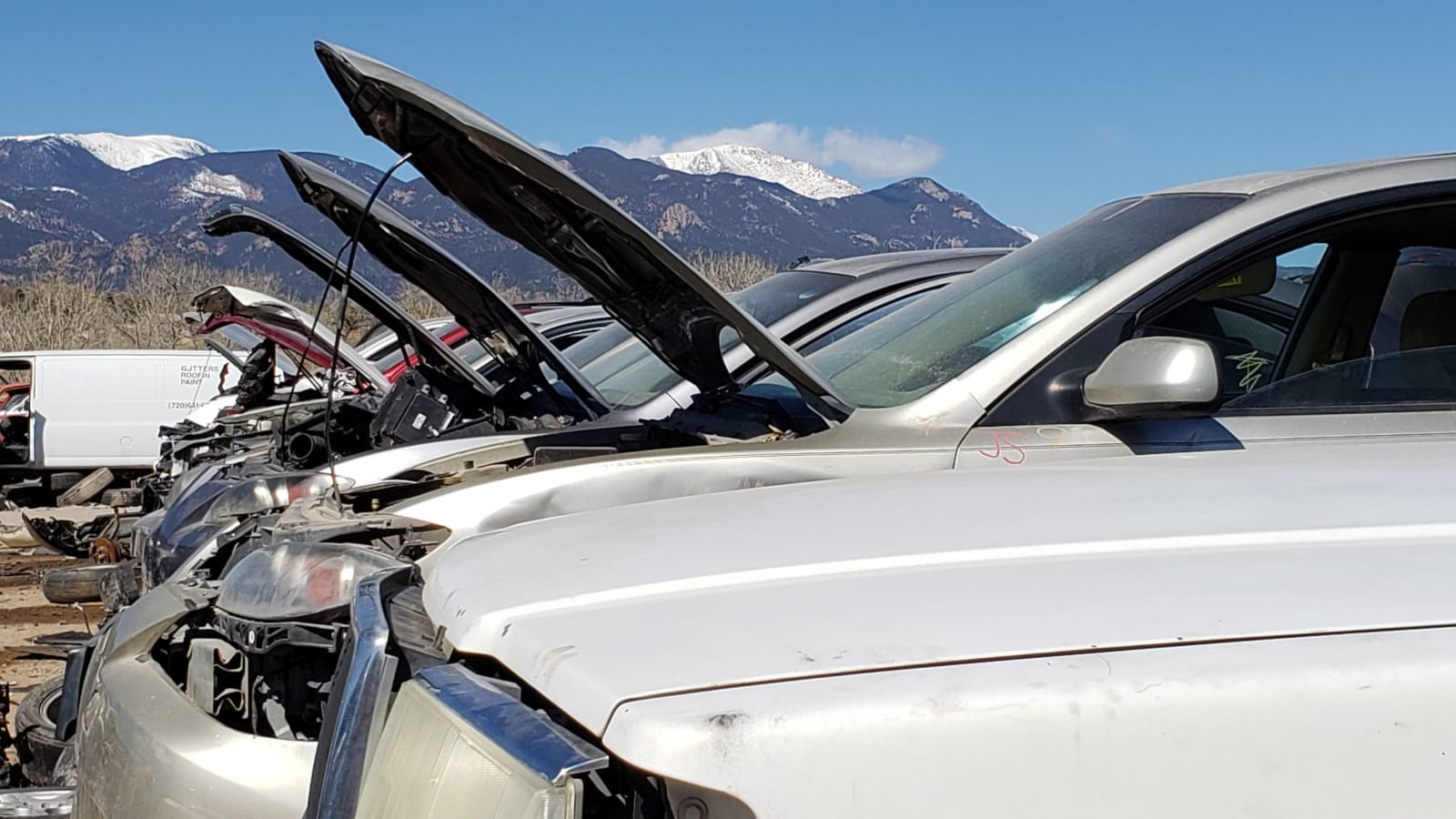 That snow-covered mountain in the center background is the legendary Pikes Peak. I always enjoy shooting photographs at this yard.

Sure, go ahead and buy a minivan for your family instead of a new 240… that is, if you care nothing about the lives of your children!