You've heard of the disco-fied Black Gold 10th Anniversary 1980 Datsun 280ZX, but this car is the much rarer Black Red version

Datsun's Z-Car turned 10 years old in 1980 (in North America), and so Nissan decided to celebrate by selling a small run of limited-edition 280ZXs commemorating that anniversary. 2,500 Black Gold 10th Anniversary cars were made, plus another 500 Black Red cars. I managed to find a discarded Black Gold 280ZX in California, way back in 2009, and I ran across this Black Red 280ZX last fall in Colorado.

We've all seen the incredibly coke-plus-Quaaludes-plus-disco-violins TV commercial for the Black Gold 10th Anniversary 280ZX, of course, and it remains one of the greatest car commercials ever made (though I think it doesn't quite touch the white-powdery zenith achieved by the "Cocaine Factory" ad for the 1985 Plymouth Turismo Duster, and then we must consider the James-Bond-on-Mars JDM ad for the 1982 Mitsubishi Cordia Turbo while we're on the subject). 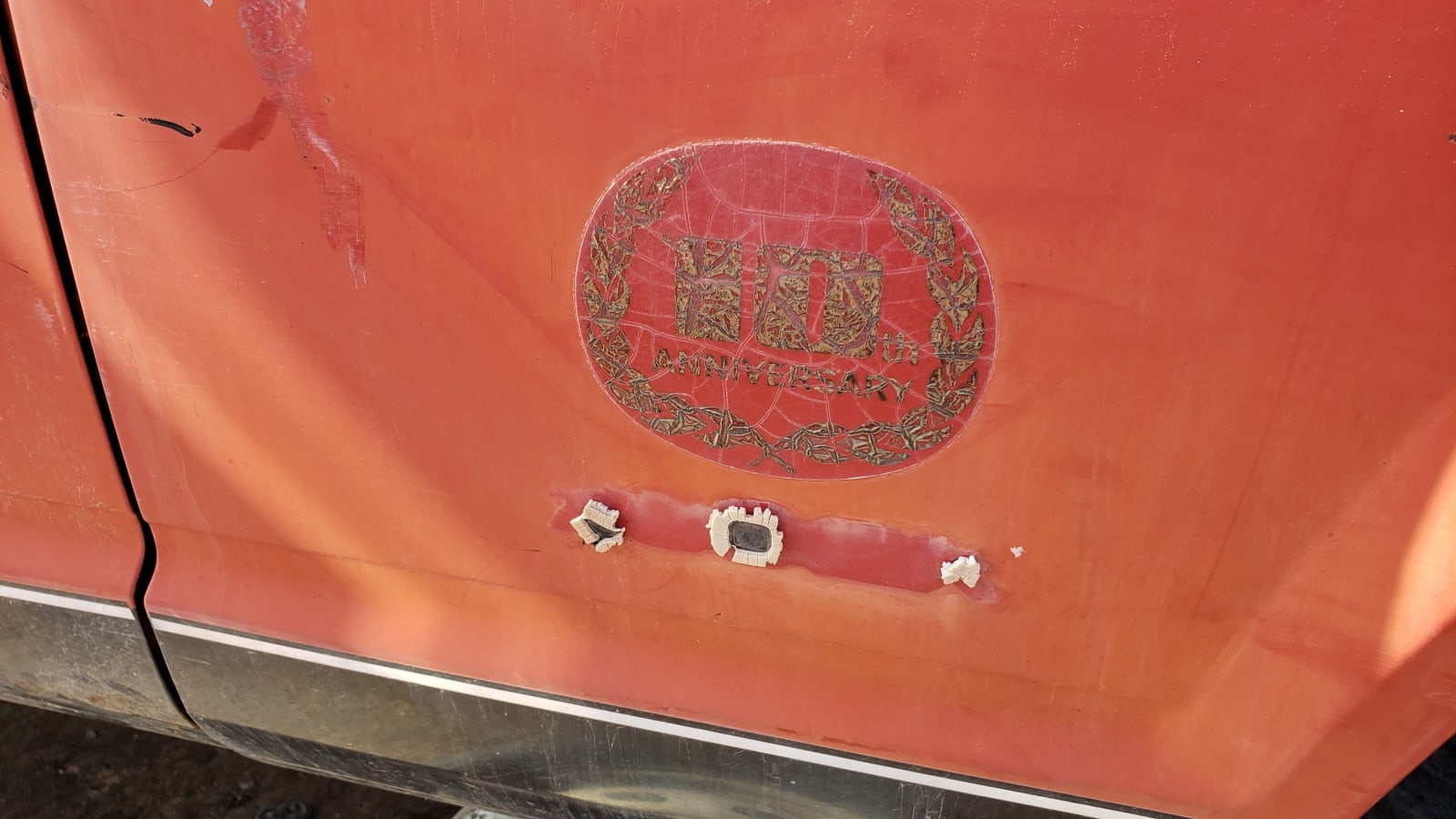 So, we have one of just 500 Black Red 10th Anniversary 280ZXs ever made right here, surrounded by cars with much less historical significance. Yet more automotive proof that rare does not always equal valuable. 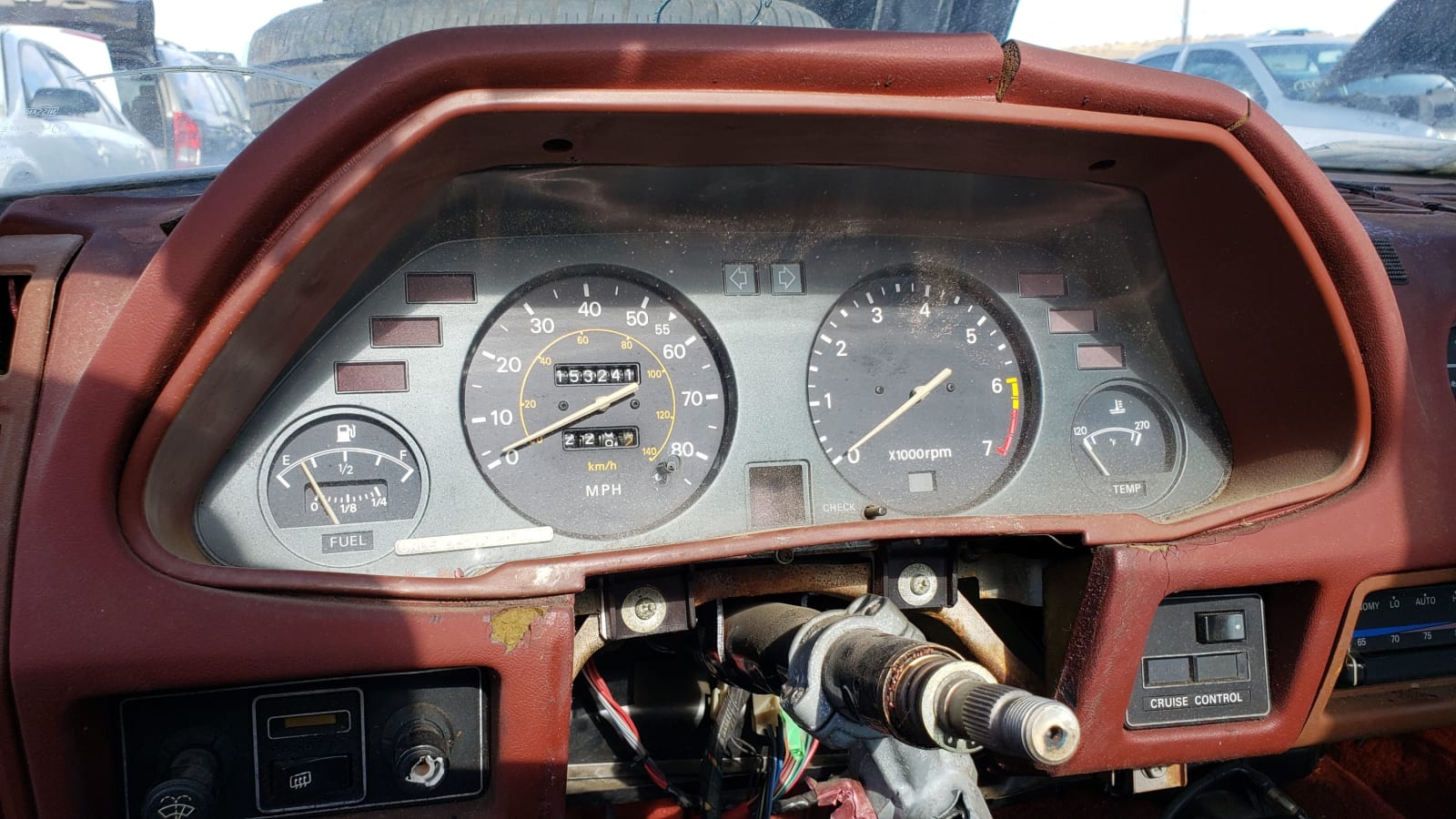 The sun has blasted the crap out of the paint and interior and the odometer reading just barely tops the 150k-mile mark, so I think this car broke decades ago and sat outside in Colorado until just recently. Note the secondary fuel gauge showing the final quarter-tank, a nice Nissan feature of the first half of the 1980s. Someone had already grabbed the phonograph-based "talking car" box before I got here, sadly. 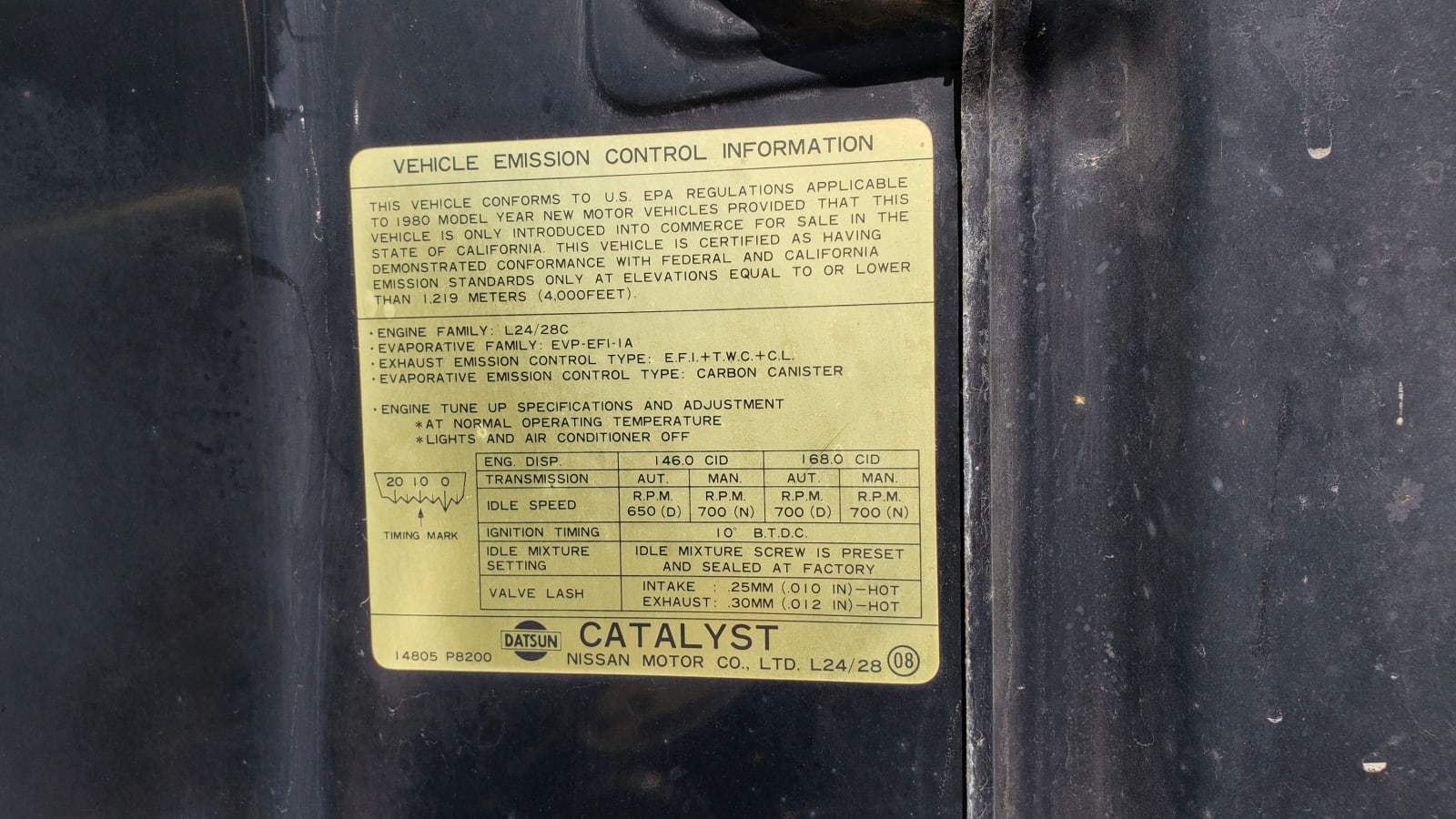 The underhood emissions sticker shows that it's a California low-altitude car rather than a "49-state" car, so it migrated east at some point after being sold in the Golden State (it's also possible that Nissan shipped California-spec cars to dealerships around the country). 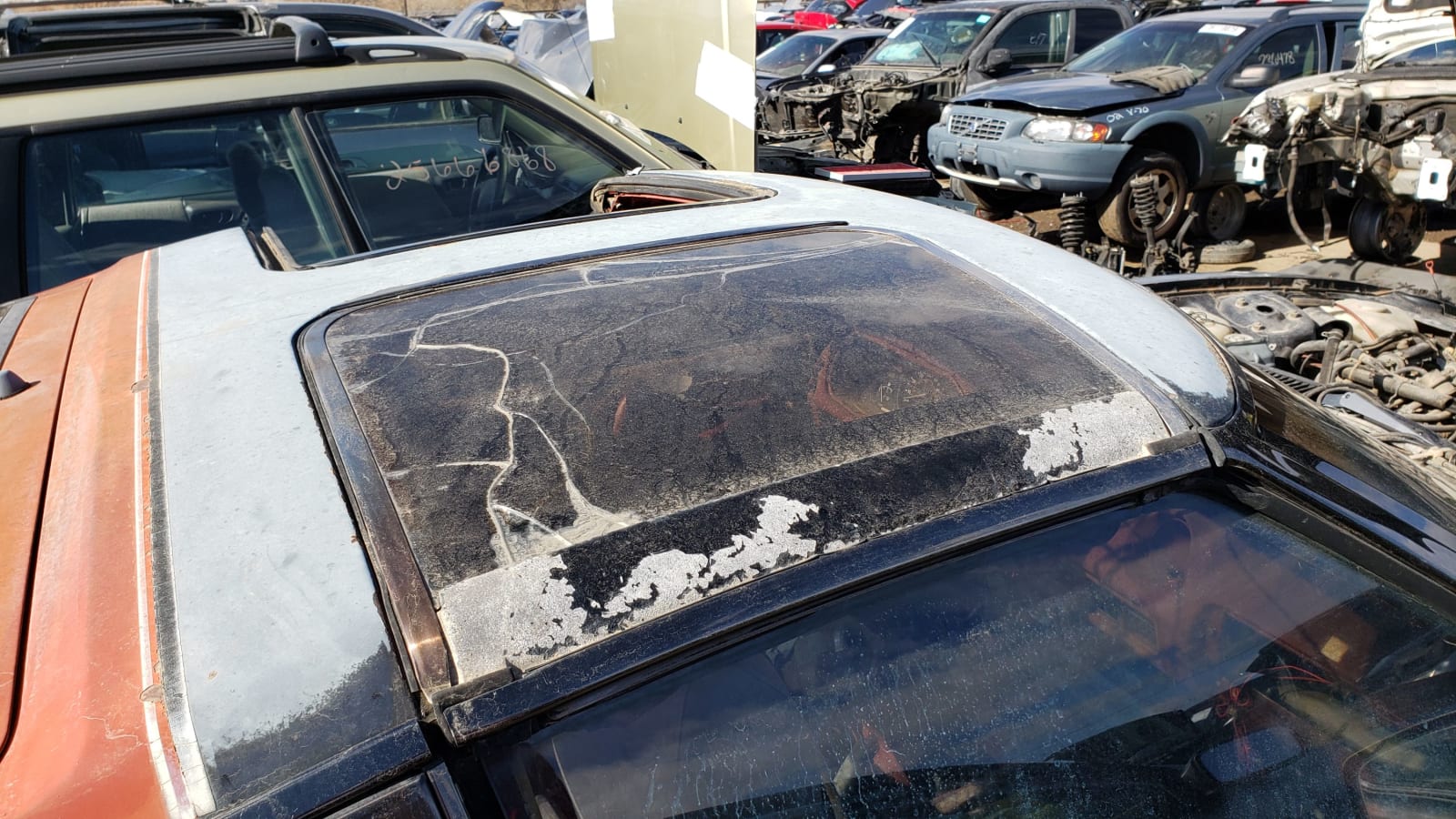 All the 10th Anniversary cars came with a full helping of luxury features, including the leak-prone T-Top roof setup so coveted during the Middle Malaise Era. 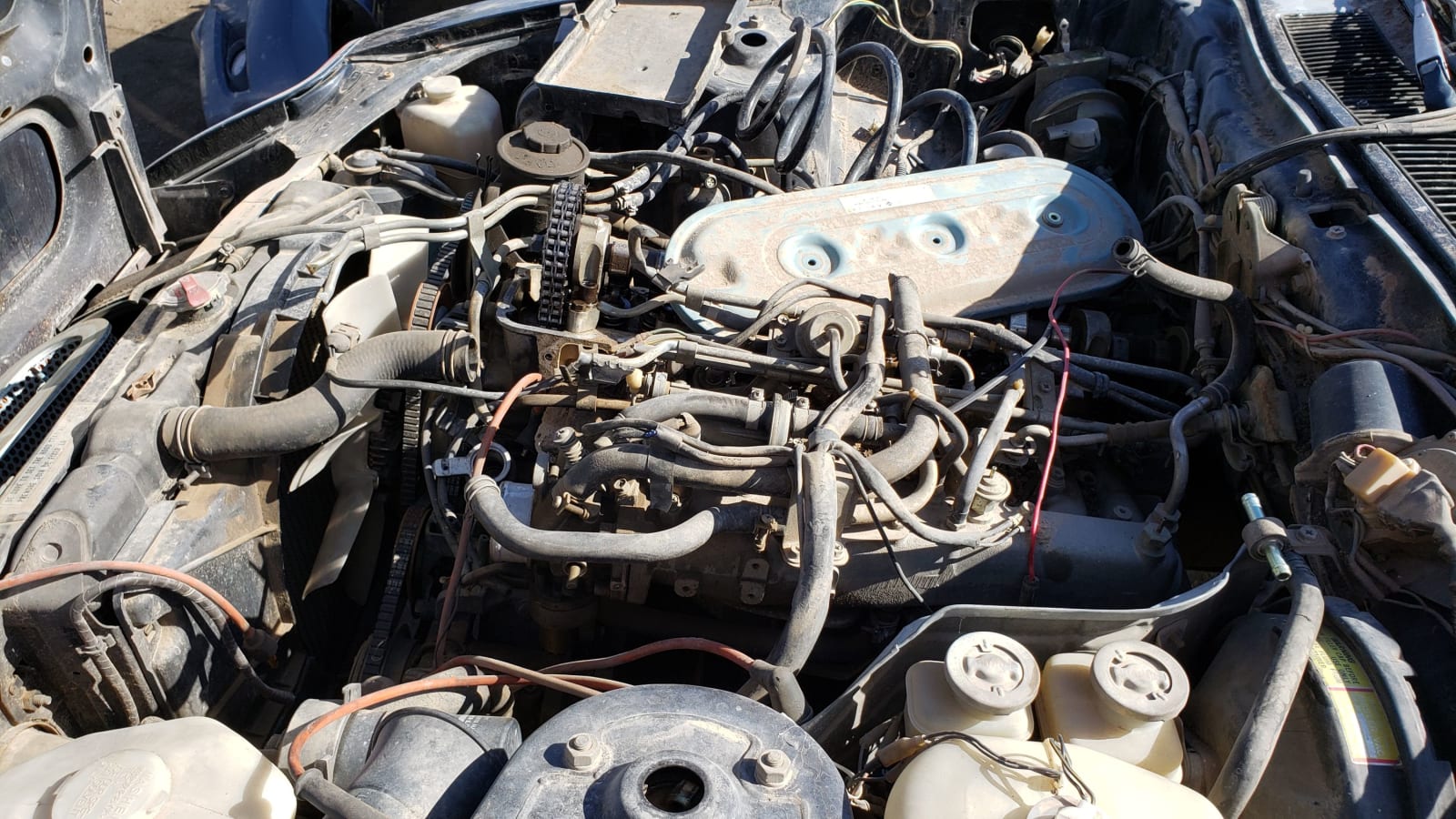 In 1980, the 280ZX got a 2.8-liter straight-six rated at 132 horsepower. The following year, Datsun shoppers could buy a 280ZX Turbo with 180 horses, which was very impressive stuff for that era. 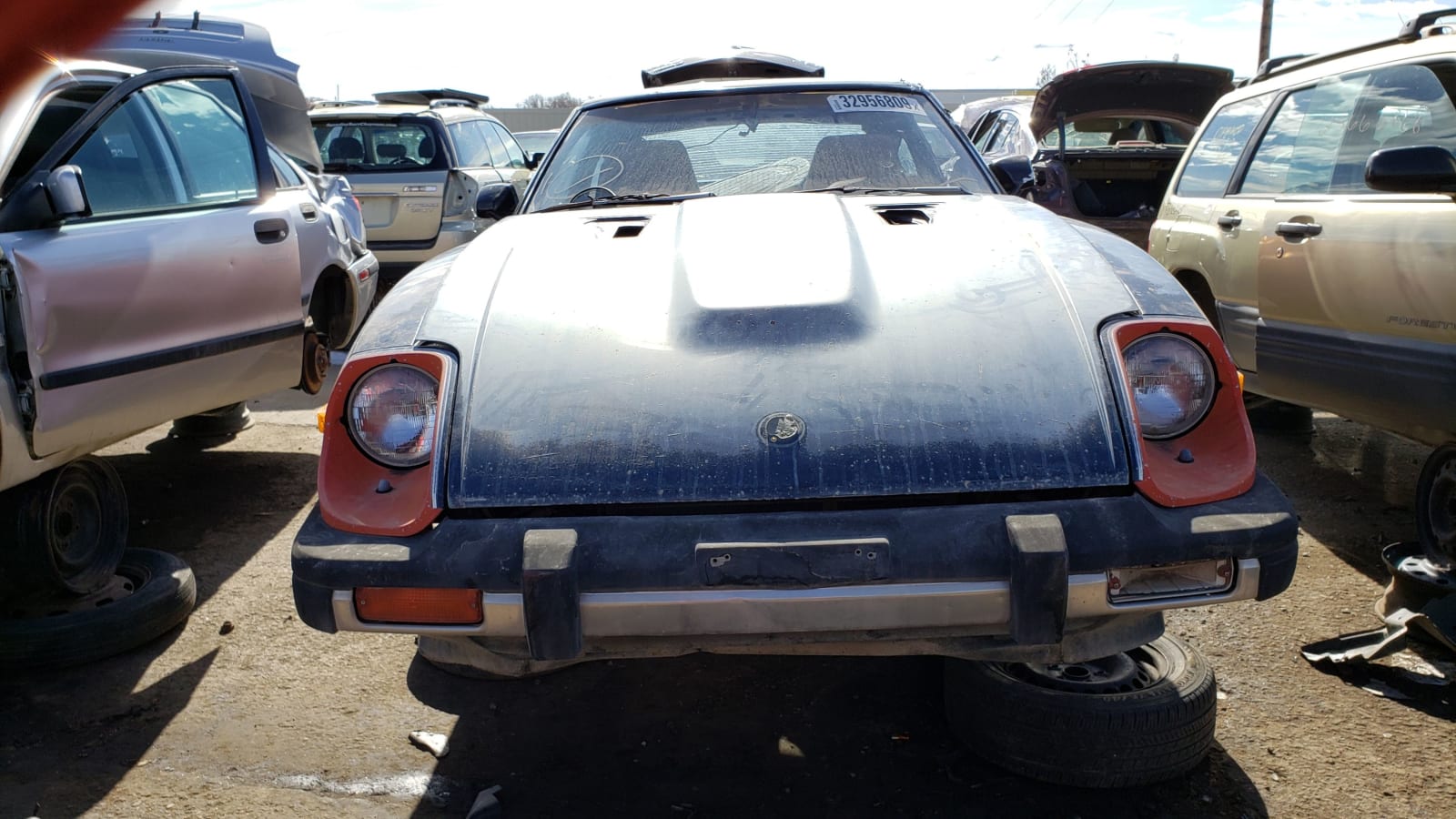 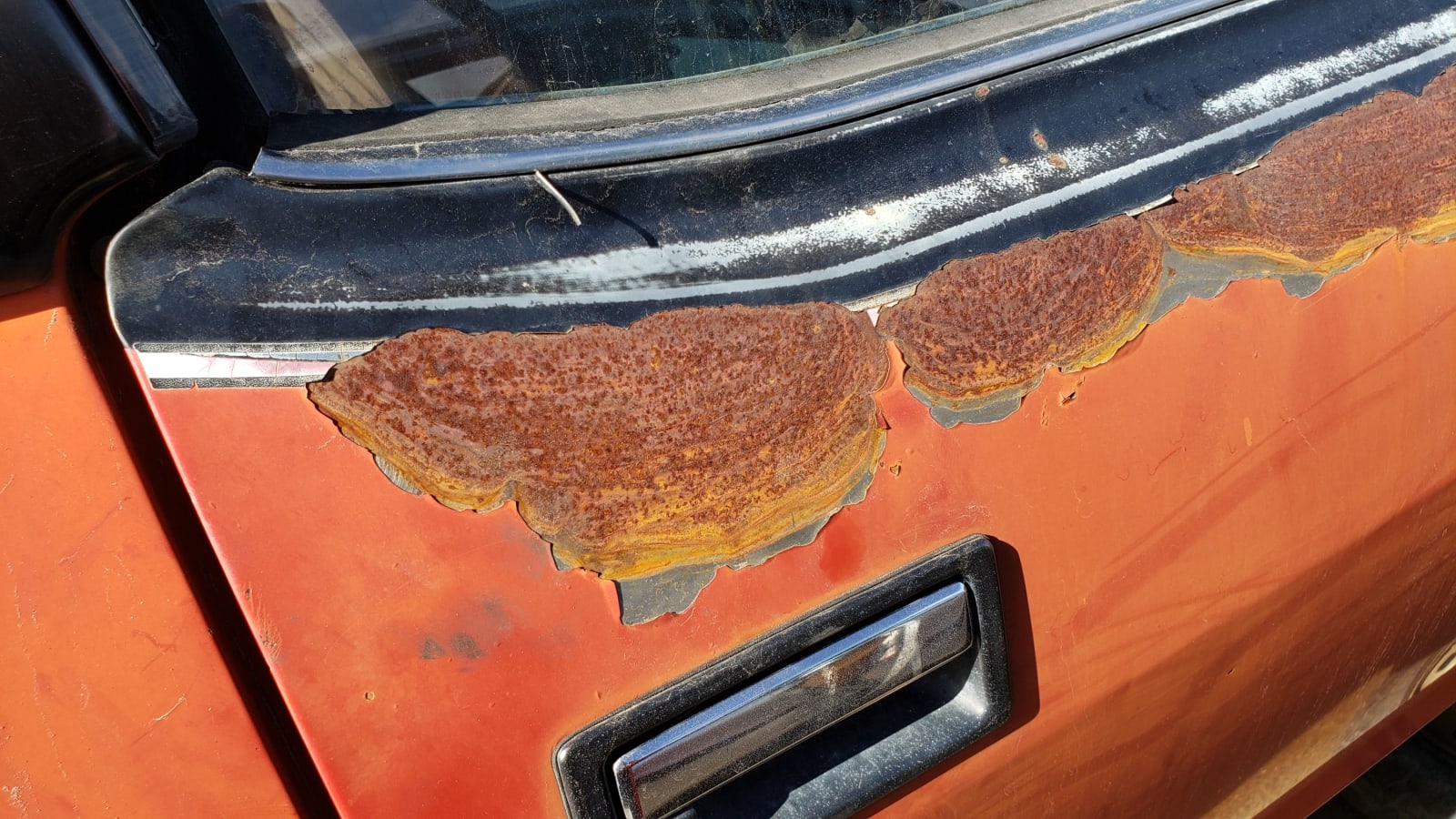 The 240Zs, 260Zs, and 280Zs can be worth restoring, even when in rough condition (though I still find some in junkyards anyway), but a thrashed 280ZX — even a limited-edition one (or a JDM Fairlady Z, for that matter) — just doesn't command the kind of value needed to warrant a major investment. The same math applies to the 50th Anniversary (of Nissan) Edition 300ZX of 1984, even though that car came with the amazing "butt-thumper" Bodysonic seat speakers.

The Japanese-market TV commercials for this car had a soundtrack that was more cop-movie than disco.

The Zed Zone wasn't for just anybody.

Datsun at its best is… awesome.