Navigating the road time forgot in a Rolls-Royce Cullinan

Finding natural isolation on one of the oldest paths in America

The Rolls-Royce Cullinan glides evenly over the rutted single-lane dirt road, barely unsettling its passengers. Nobody is speaking in the lush cabin, not even my normally chatty 7-year-old.  All eyes are turned to the Delaware River gliding by, a dozen feet away, through a skim of skeletal hardwood trees. There’s no sign of humanity or habitation. It’s almost a scene in a movie. The Last of the Mohicans, perhaps.

Today we are exploring the Old Mine Road, and it is making us think of ghosts. Its 104 miles of asphalt and dirt make up one of the oldest continuously-used roads in America, stretching from New York’s Catskills to the Pennsylvania Delaware Water Gap. The Lenape are thought to have first threaded a path here in the 1300s.

It is also a pathway wending its way through the Northeast’s violent history, from bloody skirmishes between the original Native American inhabitants and European settlers to the Americans and Brits in the Revolutionary War. Little wonder that out here in the quiet, that history — and those ghosts — feel close.

Amazingly, the 40-mile section in New Jersey that follows the eastern banks of the Delaware looks much like it did a hundred years ago. There are million-dollar views, but as part of the Delaware recreation area, no development is allowed.

Instead of the gated McMansions you’d expect less than 1.5 hours from New York City, we are greeted by silent forest and twin lanes of bumpy or shattered asphalt. There’s a section of dirt and gravel, narrowing to a single lane. Easy to imagine hundreds of years of horses and mules stamping down the thin path. 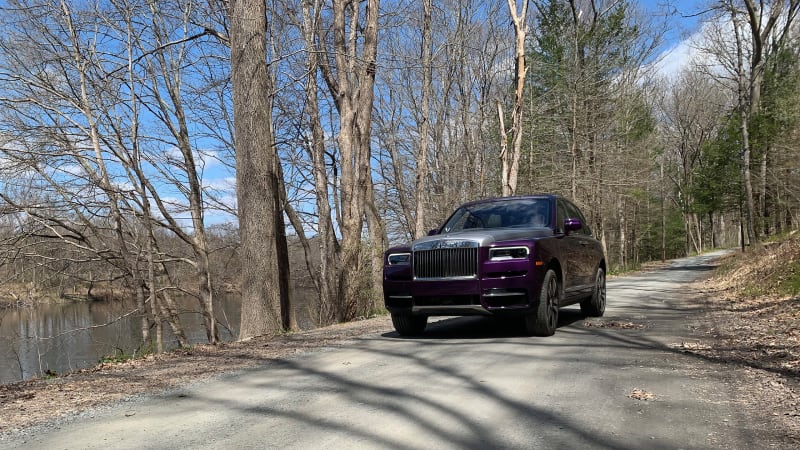 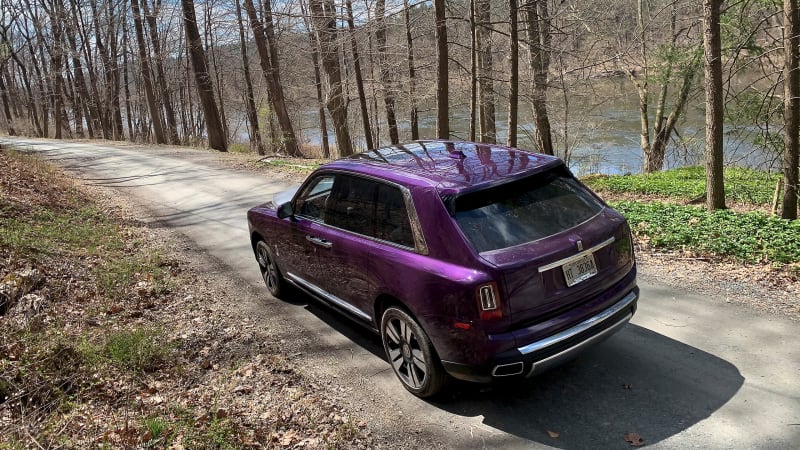 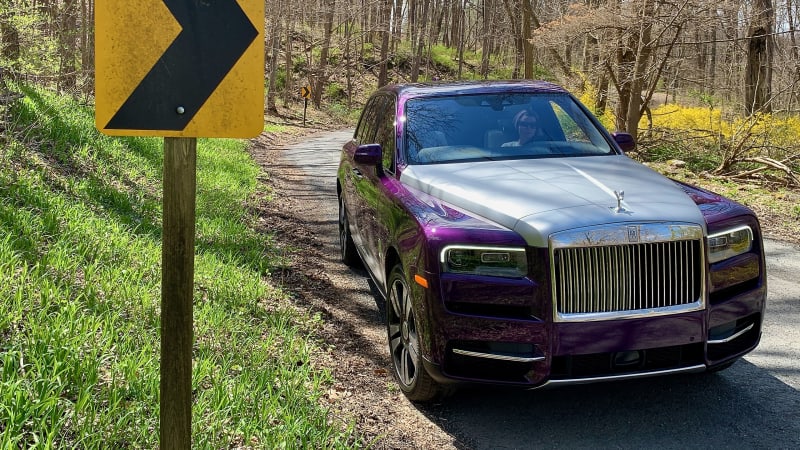 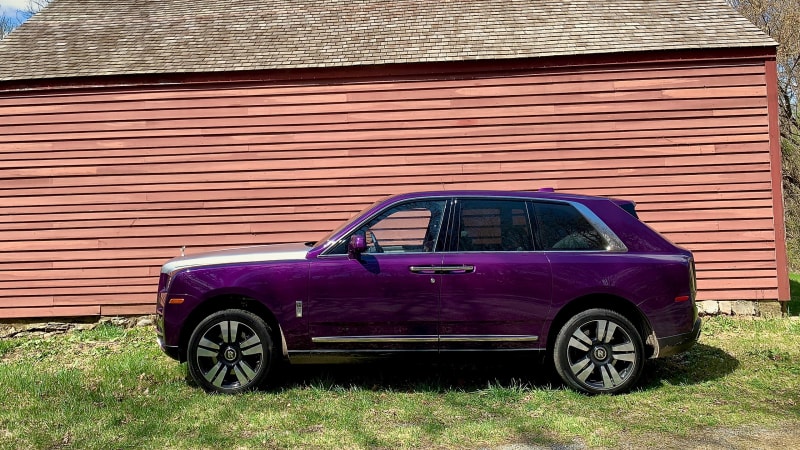 It is early spring and like everyone else, we have cabin fever. My wife, son and mother-in-law are sheltering-in-place at our country house in the Poconos. America is locked into a struggle with an invisible enemy. It seems a good time to get some historical perspective. If our ancestors lived and endured under harsh conditions, so can we.

There is nothing inherently unsafe or socially unacceptable about taking a short road trip on a virtually unused road, so we pack a lunch of cold pizza and snacks, and pile into the leather-bound, environmentally-controlled cocoon of the Rolls.

We make our way to Kingston, N.Y., where the road begins. I’m finally going to drive the entirety of the Old Mine Road.

Our Barney-purple Cullinan is a rolling sanctuary, a movable fortress of social isolation. It rides atop the Ghost’s architecture, and is powered by the same 6.75-liter twin-turbo V12, with 571 horsepower and an eerily smooth 627 pound-feet of torque. The difference is the oversized tires and tall ride height, supplemented by an independent air suspension.

The Royce is not made for serious off-road applications: With a starting price of $330,000 and an as-tested sticker of $426,700 you’d have to be insane to run it in Baja. But the Old Mine is a perfect test.

The stretch from Kingston to Port Jervis, N.Y., is officially US 209. Its two lanes are uninterrupted by traffic lights, passing through rolling hills and hamlets like Hurley, Accord and Godeffroy. It’s very rural, with scant traffic. Our purple SUV captures its share of attention, as a Roller surely isn’t a common sight. The Cullinan fills the entire lane, but the rear-axle steering helps guide us along even the curviest bits. There’s no sense in pushing hard — we’re looking for serenity and escape.

Notice all of the old blue-and-yellow signs along 209: historical plaques. Which brings us back to history’s ghosts. The Old Mine Road served as a conduit for early Dutch settlers in the 1600s, and earned its name for the Pahaquarry copper mine in the 1700s. Forts were created along its back during the French and Indian wars. And it was a vital circuit during the Revolutionary War, as it linked the Delaware River to the Hudson River, a route that the Brits badly wanted to control. 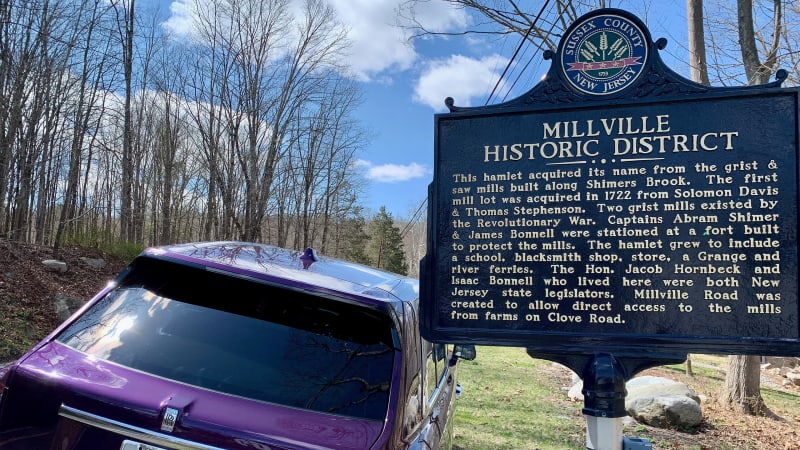 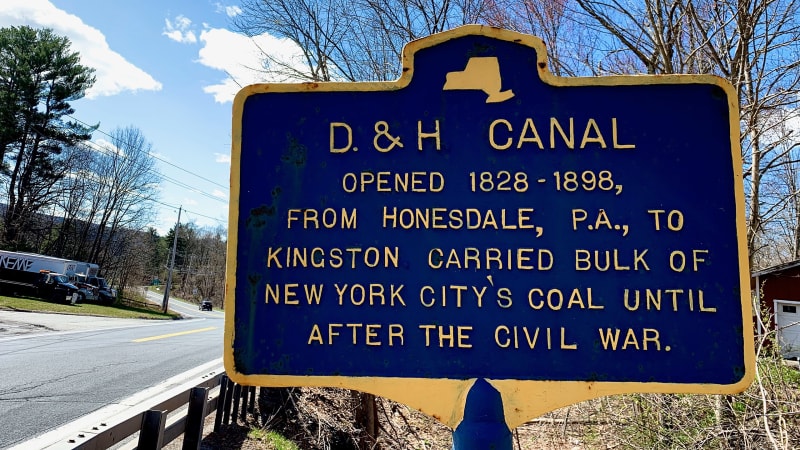 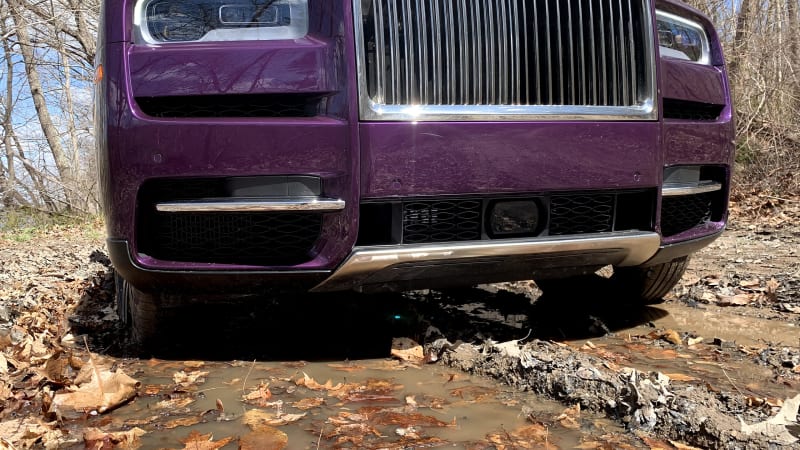 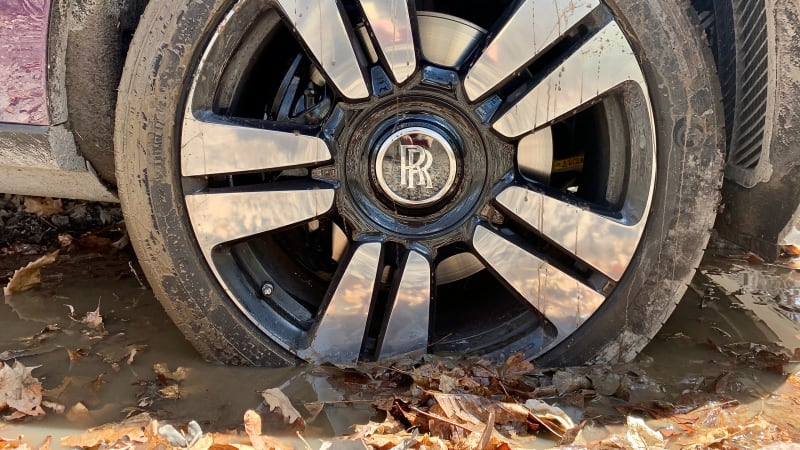 In Hurley, a sign commemorates the spot where a British spy, Lt. David Taylor, was hung from an apple tree behind a family’s residence in 1777. (A 1904 issue of the local Kingston newspaper noted that in the 1800s, “The mound over the grave was distinctly visible, and it was a proper thing for patriotic lads to dance upon it.”)

The Old Mine Road leads through the bustling community of Port Jervis, which anchors the borders of New York, New Jersey and Pennsylvania. Main Street was once part of the Old Mine` Road, and you’ll see signs for Fort Decker,  burned down in the summer of 1779 by a famous Mohawk military leader. Joseph Brant (nee´ Thayendanegea) was sympathetic to the British and during his life met historic luminaries like George Washington and King George III.

Past Port Jervis, and into New Jersey, the road pretty much ceases to be much of a road at all. It hasn’t seen any new asphalt in a very long time, and the Cullinan’s suspension takes the constant hits stoically. It is never uncomfortable for its passengers, front or back.

We reach the dirt section, which hews closely to the river in sections. My son is hungry, as usual, so I take a very muddy side road down a steep hill toward the river. I’m thankful for the clearance.

The wind is coming off the water, and it’s cold, but the views are gorgeous, and we pull out the picnic lunch we had packed.

Which is where the Rolls-Royce panache kicks in. Pop the rear tailgate down, activate an electronic switch, and two leather-bound chairs electronically swivel out, complete with a center “cocktail” table. Royce brands the swish feature its “viewing suite,” a $19,900 option.

Max hops up and promptly gets pizza grease all over the leather. The adults open both the front doors and the rear suicide doors and crouch in the lee, hiding from the wind. 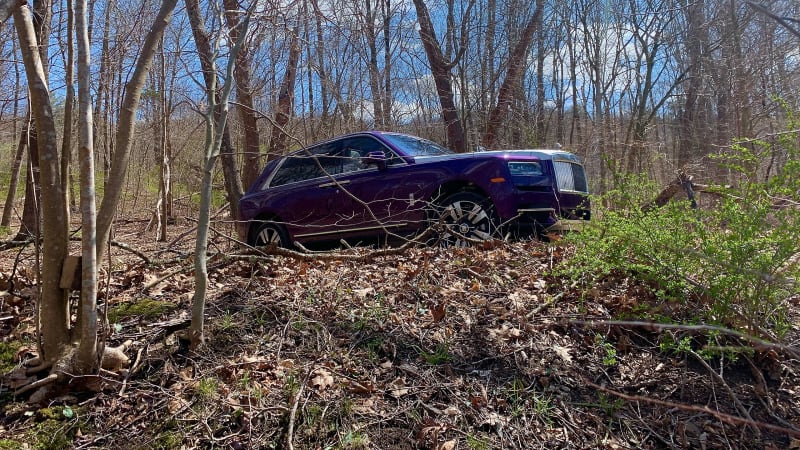 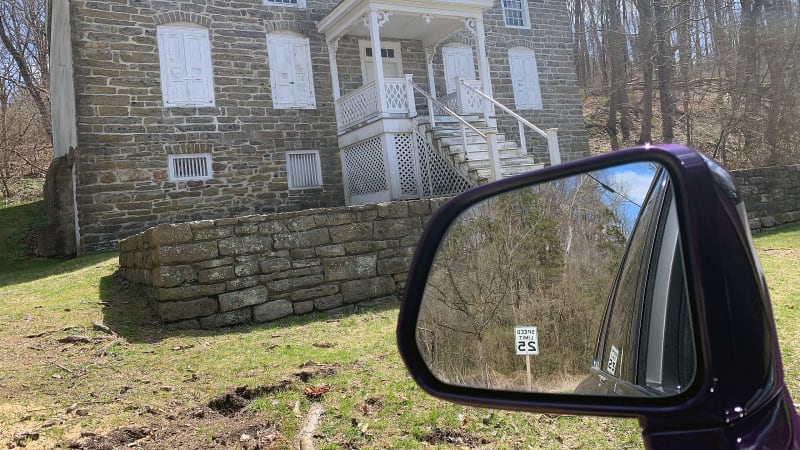 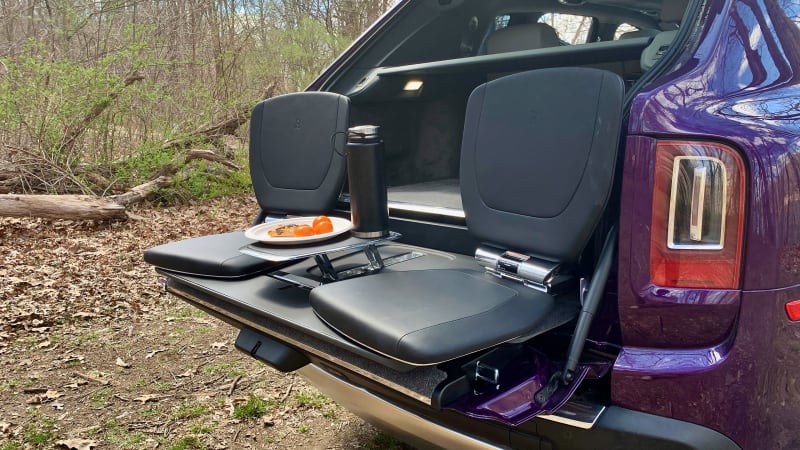 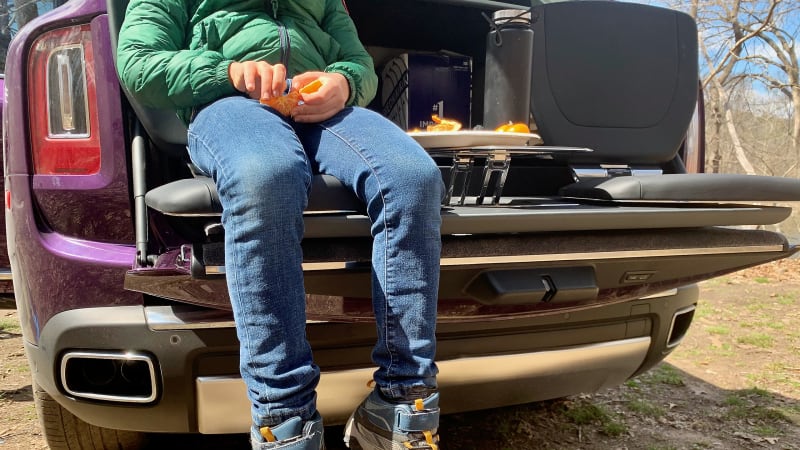 Back on the dirt road, we pass a stone building called the Van Campen Inn, where some 150 settlers crammed inside its flagstone walls to hide from a Native American attack (or so the park literature goes).

There are only a few old stone cottages to be found on the route, including one house where nine generations of a family resided from the 1730s until the 1970s — and were evicted by the federal government.

After a series of floods on the Delaware that killed 99 people in 1955, a dam was planned. Most homes and structures were torn down and 15,000 families kicked out. The dam project was canceled in the 1970s, and the properties became part of the recreation area. One can’t help feel both bad for the old families, but also thankful for the unusual circumstances that left this region so pristine.

Eventually we reach the road’s final few miles, once again paved but narrow. It leads along the high banks of the Gap itself — the spot where the river has carved out a massive fissure through the ridges of the Appalachian Mountains.

And we hit a closed and padlocked gate. No sign, no warning. And no passing beyond it. Perhaps it has something to do with the New Jersey closings of public parks due to the virus. Unclear.

“Oh, snap!” says my kid from the back, with a mixture of surprise and annoying delight. The rest of my passengers — my wife and her mom — are less delighted. Despite the comfort of the car, they’re restless and it means many miles of backtracking.

So I summon the power of the Cullinan and its accommodating suspension and we fly back the way we’ve come; eventually getting off the Old Mine Road (farewell, for now!), and onto back country lanes of New Jersey.

We reach I-80 and turn west, letting the Cullinan fly. As we pass over the Delaware Water Gap Toll Bridge, I look down and can see the single lane of the Old Mine Road, cutting through the trees and hugging the side of the ridge precariously.

I’ll be back another time, I promise, to finish those last few miles. 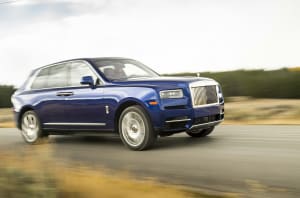 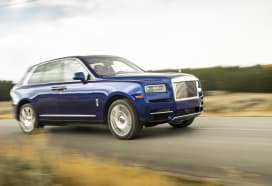 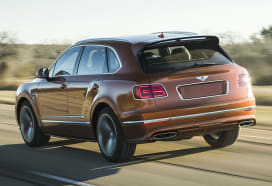 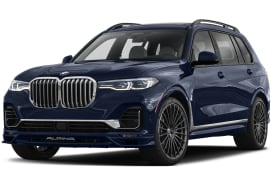