Complete with Space Age tailfins and three-on-the-tree manual transmission, one of the first post-Nash wagons from American Motors. Soon after Nash and Hudson merged to become the American Motors Corporation in 1954, the model name of the Nash Rambler compact got repurposed for use as the name of AMC's new Rambler marque. The 1956-1960 Rambler Six and V8 models did their best to compete with the behemoths of the Detroit Big Three via smaller size and greater efficiency, and sales numbers were respectable. Here's a pink, tailfinned Rambler station wagon from 1959, photographed years ago in a now-defunct Northern California self-service yard. 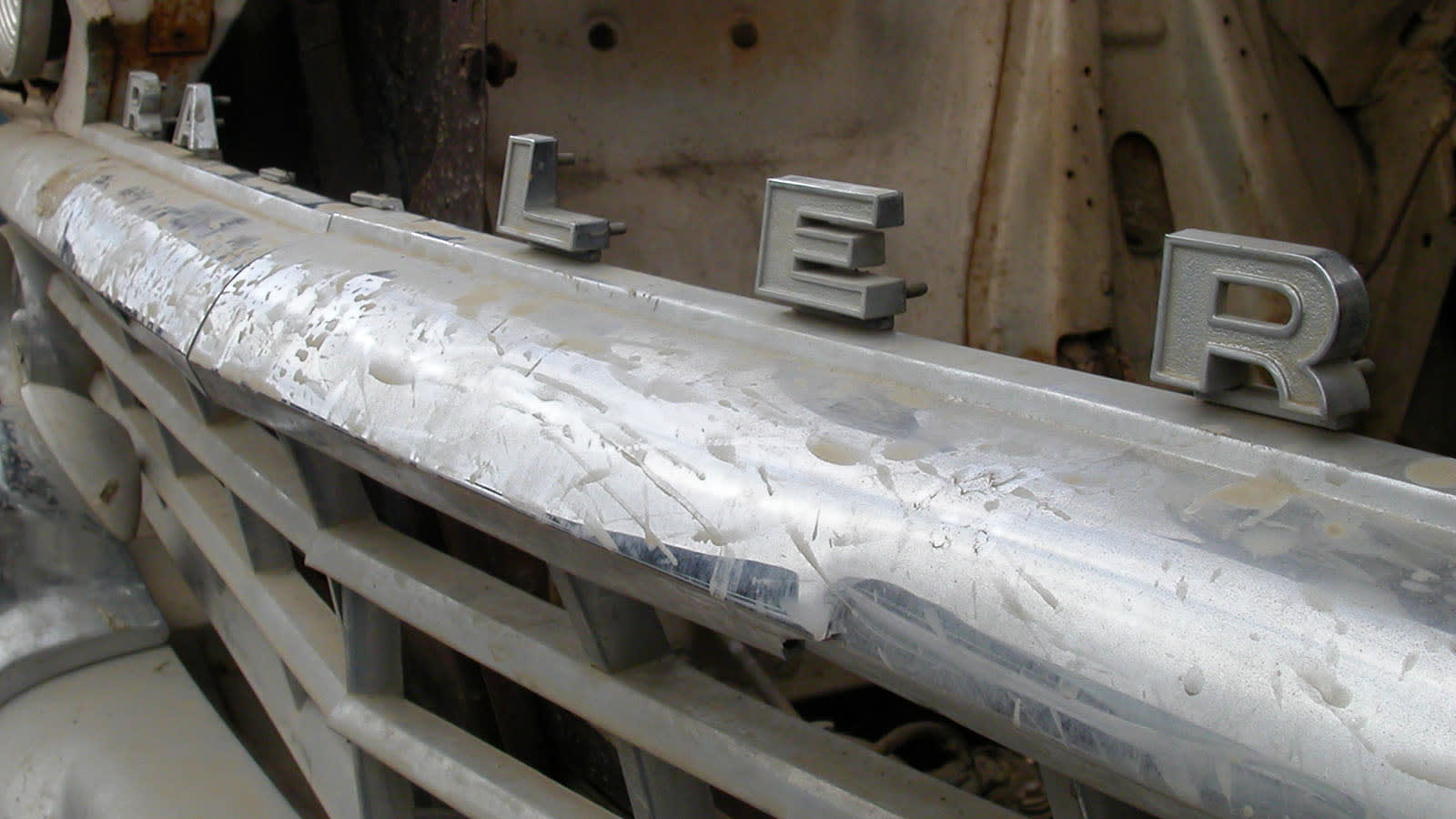 I shot these photos in 2007 with a crappy-even-for-the-era Nikon Coolpix camera, barely a month into my car-writing career (prior to that, I'd been photographing junkyards with film cameras of quality ranging from horrible to pretty good). My colleague (and fellow junkyard aficionado) Mike Bumbeck and I hit Half Price Day sales at self-service junkyards in Southern and Northern California, respectively, and Bumbeck documented some of the more interesting finds in a big Jalopnik post. Since he used just a single photograph of the dozen or so I shot of the '59 Rambler, I think it's time to share the never-before-published photos of this long-lost Junkyard Gem. Note the cool-looking RAMBLER (well, actually RA  LER in this case) letters standing atop the bumper. 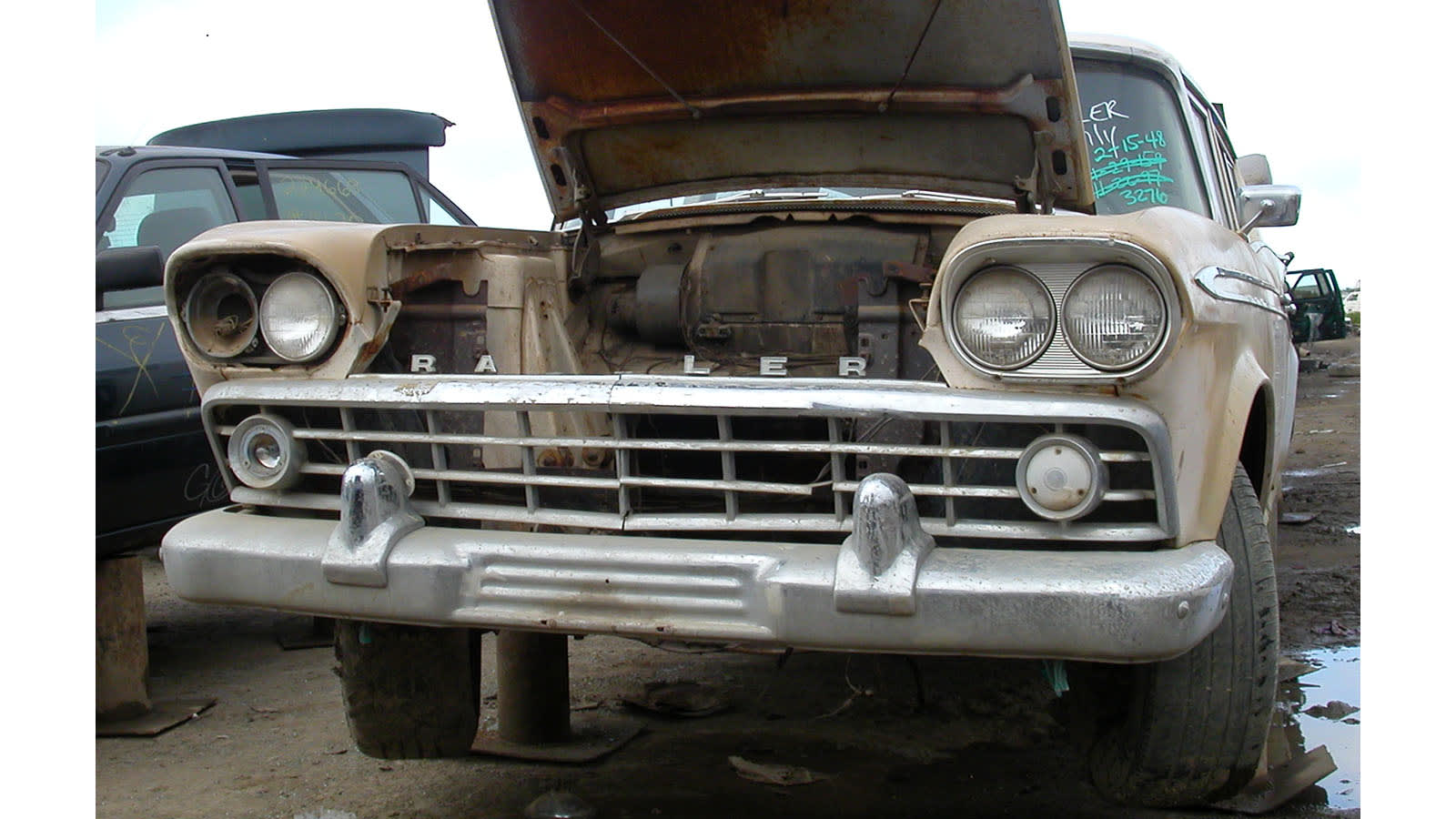 Since a junkyard shopper had acquired the engine before I arrived and I wasn't yet sufficiently savvy to photograph build plates and body numbers on old junkyard residents, I can't tell you whether this is a Six or a V8 car. The six-cylinder would have been a Nash overhead-valve unit of 196 cubic inches, the spiritual ancestor of the family of AMC sixes used well into our current century. The V8 would have been a 250-cube (4.1-liter) plant unrelated to the V8s used in the famous AMXs and Javelins of the late 1960s and early 1970s. I've found one of these wagons in the junkyard with the old Nash flathead engine, but I'm nearly certain that was a swap and not a factory installation. 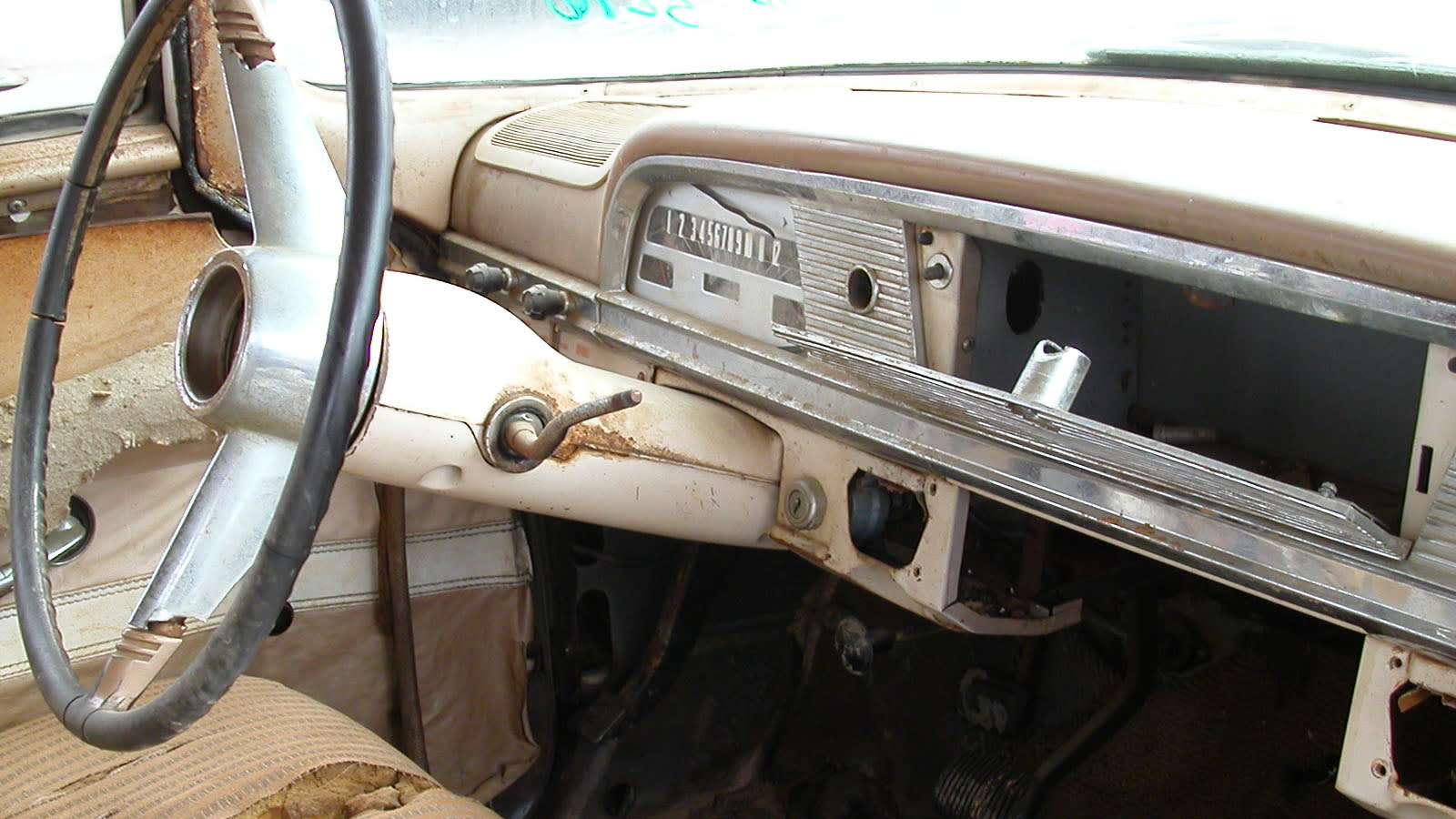 The three-on-the-tree column-shift manual transmission was still the most popular setup in American cars during the Sputnik Era, though it wouldn't be long before column-shift automatics (and the occasional four-on-the-floor manual) took over the car world here. It's easy to imagine the family patriarch chaining unfiltered Winstons while working this shifter on a road trip to Yosemite, circa 1961. Disappointingly, the Weather Eye controls were gone when I got to this car. 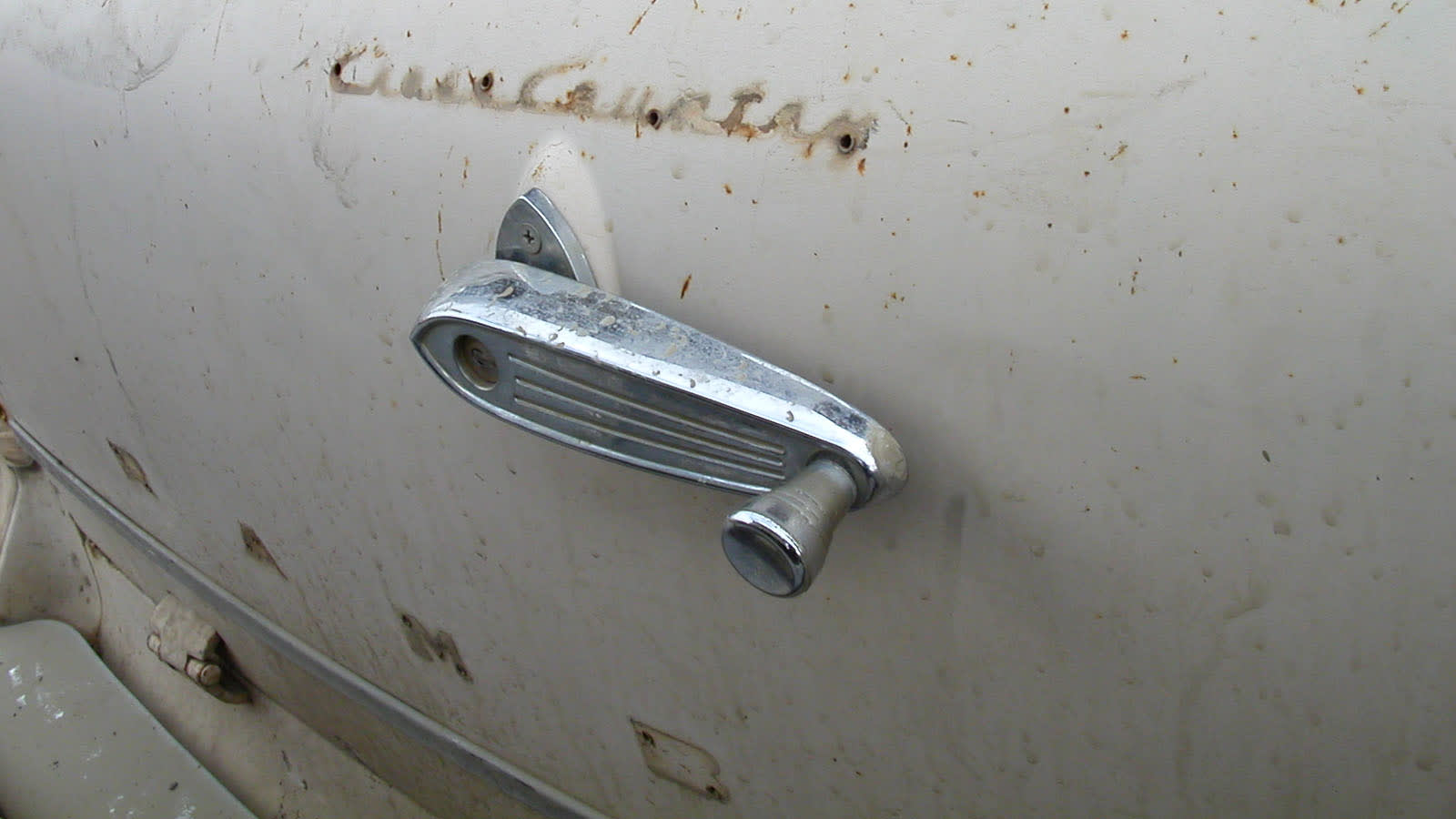 With the roll-down rear window providing carbon monoxide access on the road (you weren't supposed to leave it open while driving), seats that folded into beds, and a "kiddies' play pen" in the back (don't crash!), the Cross Country made an ideal long-distance travel vehicle in the days before cheap air travel. 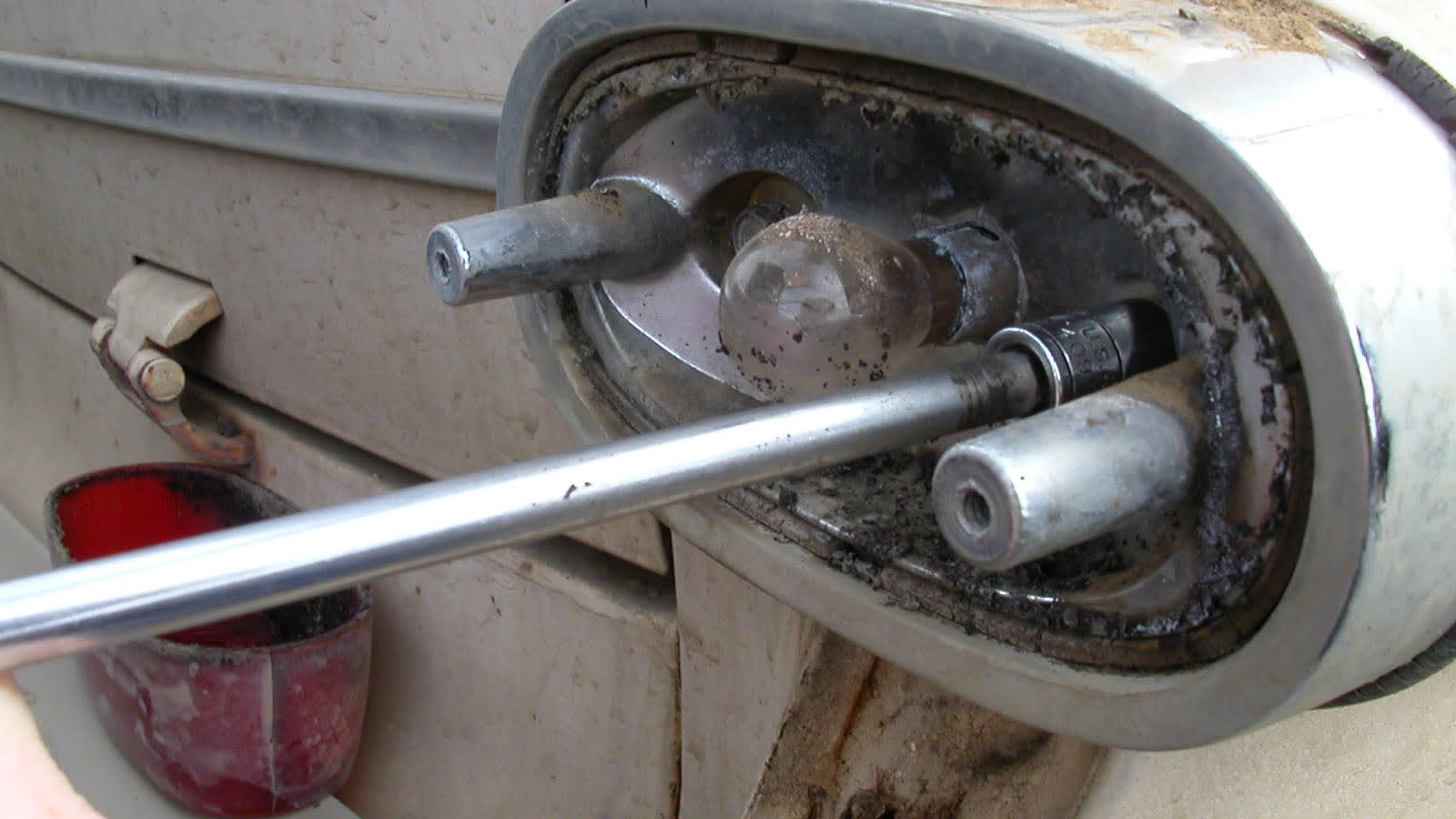 I bought the taillights and either sold them on eBay or gave them to a 24 Hours of Lemons team for use as giant idiot lights. That's what you do on Half Price Junkyard Sale Day.

Here's a filmstrip made to instruct Rambler salesmen in the art of pitching the 1959 Cross Country.