It receives better in-car tech, too

Audi gave the coupe and Sportback variants of the RS 5 a mid-cycle update that brings them in line with the bigger RS 7 Sportback and the fourth-generation RS 6 Avant. The list of changes includes better in-car technology, but the V6 remains untouched.

Viewed from the front, the updated RS 5 stands out from the outgoing model with a grille that's shorter and wider, redesigned LED inserts in the lights, and a new-look lower bumper. Seen from the back, the LED lights and the updated trim panel that connects the oval exhaust tips are the main giveaways that you're looking at the face-lifted model. 19-inch wheels come standard, and three new 20-inch alloy designs are available at an extra cost.

Enthusiasts concerned with saving weight can order an optional carbon fiber roof panel that shaves 6.6 pounds from the coupe, bringing it down to 3,757 pounds. In Germany, Audi also offers a 25 Years of RS package that pays tribute to the revered RS 2 with Nogaro blue paint, aluminum and gloss black trim, plus blue accents inside. 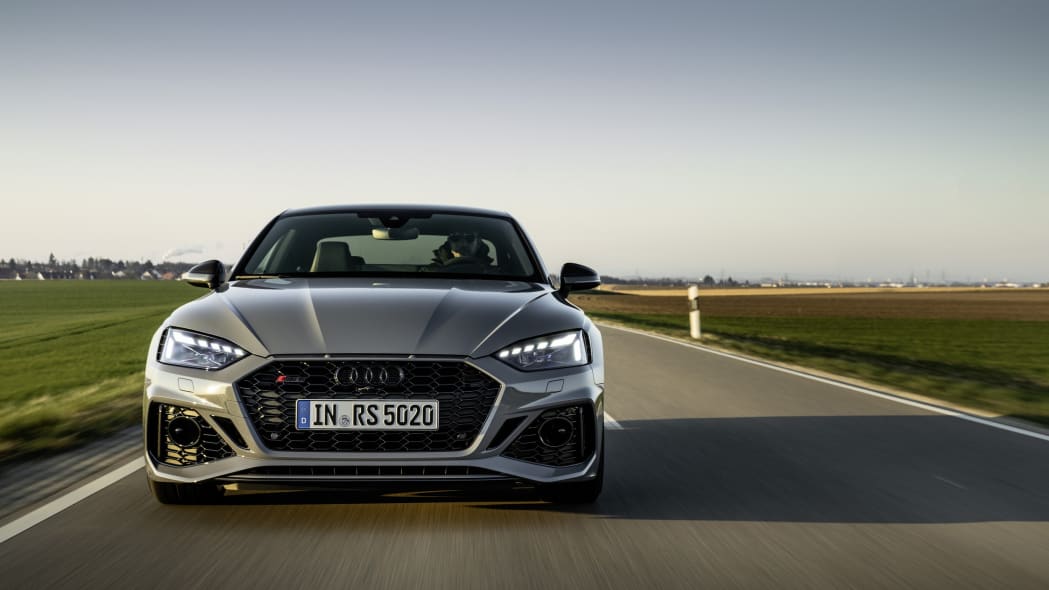 Speaking of the interior, the dashboard gains a 10.1-inch touchscreen that displays Audi's MMI infotainment system. This setup allowed designers to send an array of buttons and the bulky selector dial back to the parts bin. They took advantage of the newfound real estate to add a storage bin between the gear selector and the cupholders. This update addresses one of our biggest complaints about the outgoing RS 5.

There are no mechanical changes to report, so both body styles carry on with a 2.9-liter V6 that's twin-turbocharged to deliver 450 horsepower and 442 pound-feet of torque. The latter figure is available between 1,900 and 5,000 rpm. Reaching 60 mph from a stop takes 3.9 seconds, and the RS 5 doesn't stop accelerating until its digital speedometer displays 155 mph. Audi Sport can raise that figure to 174 mph upon request.

An eight-speed automatic transmission and Quattro technology still send the six's power to the four wheels. Audi's drive select system gains two modes named RS1 and RS2, respectively, that let the driver configure the throttle response, the transmission's shift points, and the suspension's firmness, among other parameters. The two custom profiles are accessible instantly via buttons positioned on the steering wheel's horizontal spokes.

Audi's updated RS 5 will arrive in German showrooms this spring. Pricing starts at 83,500 euros (about $91,000) regardless of whether buyers choose two or four doors. Details about the American-spec models, including pricing and availability, will be released in the weeks leading up to their on-sale date.