Saab didn't want this electric, 99-like delivery van from the 1970s

Two prototypes were built before the project got axed

National Electric Vehicle Sweden (NEVS) purchased the remains of Saab in 2012 to turn it into an electric-only brand. While its vast heritage is turbocharged and rooted in racing, Saab didn't shy away from dabbling in battery-powered drivetrains, and there's an experimental mail delivery van in its official museum to prove it.

The name Saab in the last paragraph should be followed by an asterisk. The prototype kind of looks like a 99 when viewed from the front, and it wears the soccer ball-style alloy wheels seen on several of the brand's models during the 1970s, but the museum's curator told Autoblog it was built in Linköping, Sweden, by the company's defense and plane-making division. It's certainly a Saab, but not quite the kind you're likely thinking of.

Engineers began the project in the early 1970s, at about the same time archrival Volvo launched its own experiments in the field of electrification. The idea was to create an electric, short-range distribution van that could be used by Sweden's postal service, for example. Two prototypes were built in 1975 and 1976, including the example in the museum, and each had a low-speed driving range of about 40 miles. Additional technical specifications are lost to history, partly because Saab's car-building division in Trollhättan -- the folks that developed the 99 and the 900, among others -- didn't like the van at all and wanted nothing to do with it. 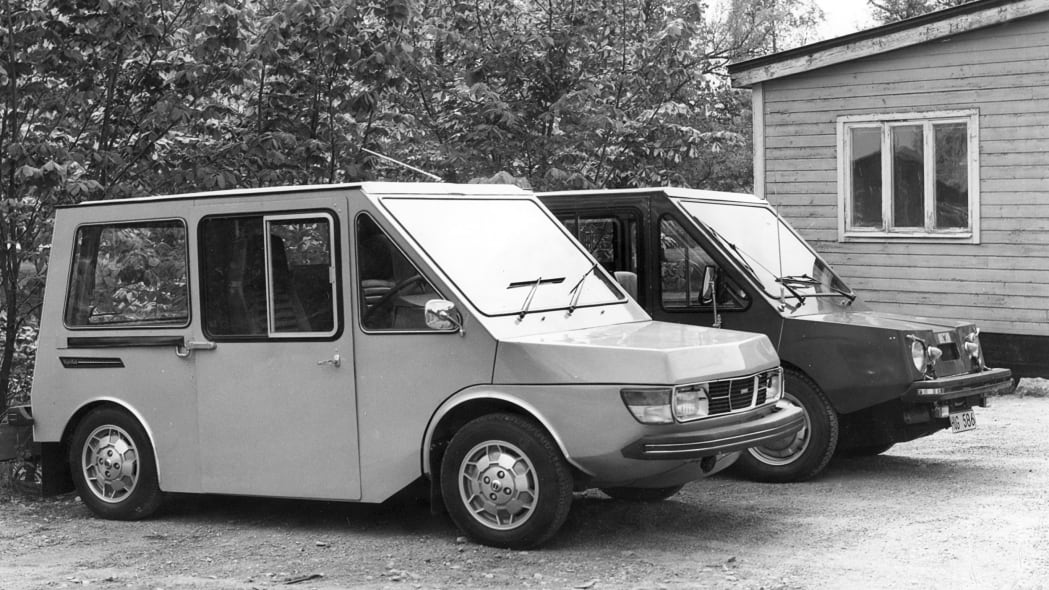 We peeked inside and under it and spotted a bulky, lead-acid battery pack integrated into a tray that could be pulled out from the back after flipping up the panel onto which part of the rear bumper was mounted. This layout was relatively common in early electric prototypes, like the Bus that Volkswagen developed in 1972 and tested in select German cities. Recharging the battery pack took hours, so swapping it out was considered the more practical alternative. Period documents and images confirm the electronics were mounted under the hood.

Saab made two electric prototypes, including one it fitted with front-end parts like headlights (complete with wipers), turn signals, and a plastic grille from a 99. The second wore round headlights, bullet-shaped turn signals, and looked more like something you'd see in an episode of "Scooby Doo" than what you'd find in a Saab showroom. The van's resemblance to the 99 was purely artificial; it was its own thing, on its own chassis.

And yet, some interior items came from the 99 parts bin, a move which undoubtedly made more sense than fitting the van with seats from a Saab fighter jet. This hodgepodge of custom-built and off-the-shelf components was tested extensively, its its odometer reads about 7,000 miles, but it ultimately remained at the prototype stage. Saab largely stayed away from electrification until, under the NEVS umbrella, it displayed a one-off electric 9-3 in 2014. Series production started in 2017, though how many cars the firm has built since is unclear.