Traffic in San Francisco is down 51%

Road traffic across the United States has dropped by up to 30% as the number of Americans working from home, social-distancing, and obeying stay-at-home orders has increased, according to a recent study. While that's a sobering statistic, locked-down nations across the pond have experienced even sharper declines.

INRIX, a Washington-based company that provides traffic-related data and analysis, published a comprehensive synopsis that compares the national traffic volume from the 14th to the 20th of March to volume recorded between the 22nd and the 28th of February. It explained the number of road users began dropping on the 13th after increasing for 16 straight days, but the decline posted was relatively small at 5%. The 14th and the 15th experienced 18% and 24% drops, respectively, and traffic dropped by 30% on the 19th and the 20th.

Long-haul trucking is steady, according to the study, which makes sense considering demand for goods has increased in recent weeks. Local fleets (like service vehicles and delivery vehicles) are about 10% less active. 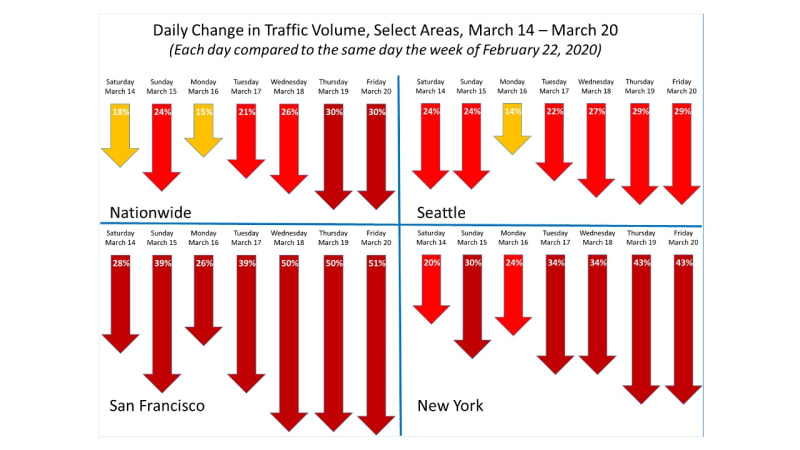 Seattle's volume drop largely mirrored the nation's, though traffic will likely plummet in the coming days because Washington governor Jay Inslee issued a two-week stay-at-home order on March 23rd. Traffic in San Francisco, where the mayor asked residents to stay at home on March 16th, dropped by up to 51%, while locked-down New York City experienced a maximum drop of 43%. Volume in both cities has been well below the national average.

The coronavirus began ravaging Italy in January 2020, and the country's government announced a full lock-down on March 9. Traffic has dropped by 65% since, according to INRIX's study, and satellite data suggests air pollution in major cities, like Rome and Turin, has cleared significantly since. Neighboring France has been locked down since March 17th but, oddly, pollution levels haven't dropped in the Paris area, according to BFMTV.

What's next? Will traffic in the United States drop to Italy levels? It's difficult to predict with any credible level of accuracy, and it largely depends on a variety of factors like how quickly the disease spreads and the measures taken to curb it. "We look forward to the week, hopefully soon, when we can report on congestion and volume growth as this will be a sure sign of recovery," INRIX wrote in its synopsis. We're looking forward to reporting it.