A look at diminished range, charging times and what happens when an EV runs out of power

Electric vehicles are known to suffer diminished performance in cold weather, but some do a better job than others hanging onto their range capacity while cabin heaters and frigid outdoor temperatures sap power from their batteries. Recently, the Norwegian Automobile Federation put the 20 of the best-selling battery-electric vehicles in the country to the test, to see not only how winter weather affected their range but also their charging times.

The major findings: On average, electric vehicles lost 18.5% of their official driving range as determined by the European WLTP cycle. Electric vehicles also charge more slowly in cold temperatures. And interestingly, the researchers learned that EVs don’t simply shut down when they lose power but instead deliver a series of warnings to the driver, with driving comfort and speed levels maintained until the very last few miles.

Because it’s Norway, the world’s top market for electric and plug-in hybrid vehicles by market share, the test included many EVs that aren’t available here in the U.S. But there are many familiar faces, among them the Nissan Leaf, Tesla Models S, 3 and X, Hyundai Kona (known here as the Kona Electric) and Ioniq, and Audi E-Tron. 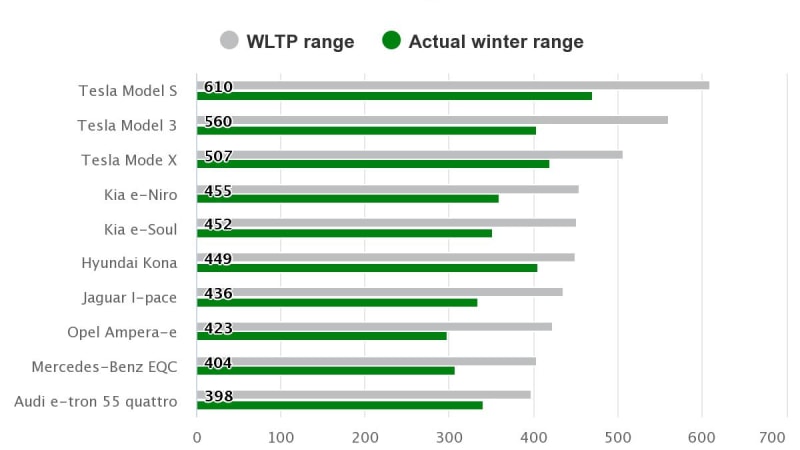 In terms of range, the top-performing EV was the Hyundai Kona, which lost only 9% of its official range, which the WTLP rated at 449 kilometers, or 279 miles, compared to its EPA-rated range of 258 miles on a full charge. It delivered 405 km, just enough to nudge it ahead of the Tesla Model 3, which returned 404 km. 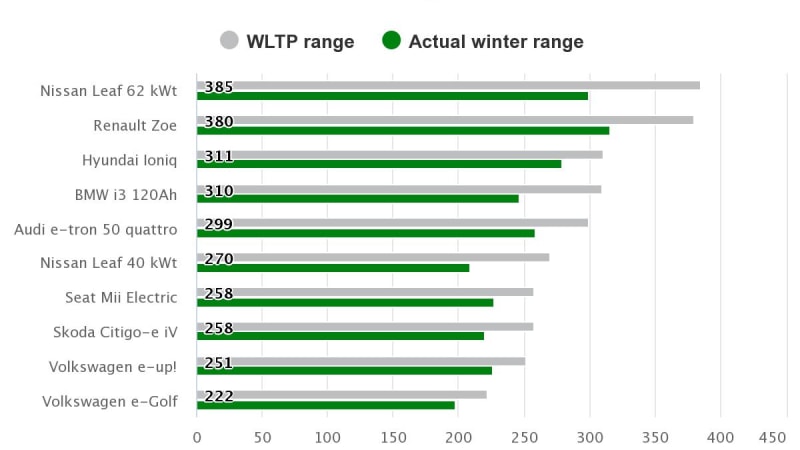 Other top performers included the Audi E-Tron, in both its 50 Quattro (13% lower range) and higher-powered 55 Quattro (14% lower) guises; the Hyundai Ioniq (10% lower); and Volkswagen e-Golf (11% lower). At 610 km (379 miles) the Tesla Model S has the longest WLTP range of all models tested and went the furthest, but still lost 23% of its range, though it also encountered energy-sapping heavy snow at the end of its test, when many cars had dropped out. The Model 3 lost 28% of its range.

The worst performer? That goes to the Opel Ampera-e, better known stateside as the Chevrolet Bolt. It traveled 297 km (about 184 miles) in the test, which was nearly 30% lower than its stated WLTP range. We should also note that Opel, now owned by Groupe PSA, is phasing the car out in Europe and that Chevy recently upgraded the Bolt here in the U.S. by boosting its EPA range to 259 miles, an increase of 21 miles, and making enhancements to its DC fast-charging and cold-weather recharging capabilities.

The convoy-style test route was the same for all vehicles and included a mix of city, highway and country-road driving at speeds ranging from 37 mph to 68 mph, with all vehicles in eco drive mode or its equivalent. Every car scaled one mountain pass, while the longest-running models climbed two. Drivers weren’t allowed to preheat either the cabins or the battery, but the climate controls were set to heat the cabins to nearly 70 degrees F during the test drive, with seat heating at its lowest setting. Outdoor temperatures ranged from 37 to 21 degrees Fahrenheit. 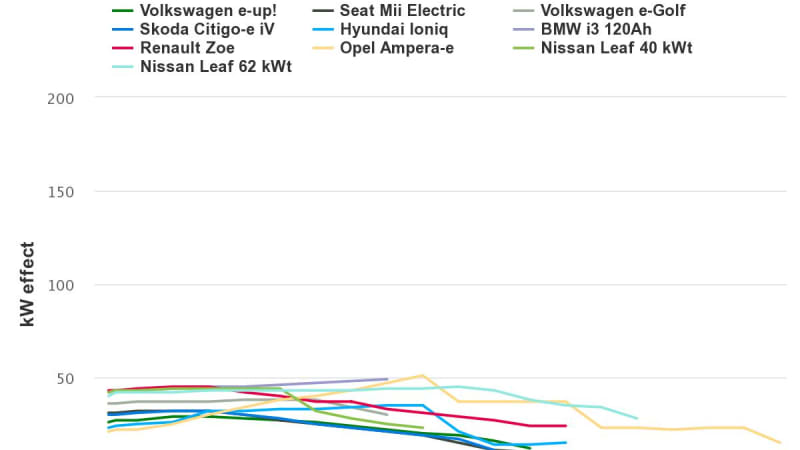 To test charging, all cars were driven straight to the charging station after at least two hours of highway driving, so the batteries were warm and more optimal for charging, with no waiting in line. Researchers charged them from no more than 10% capacity to 80%. 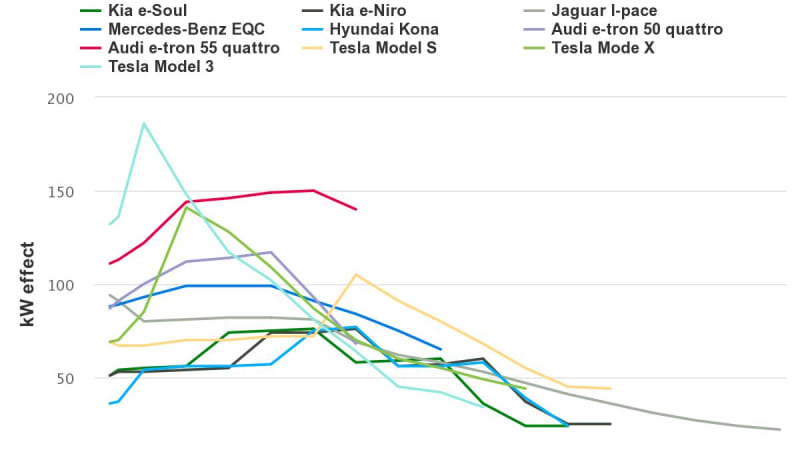 Here, the Opel Ampera-e also fared worst, along with the Renault Zoe. The former boasts the ability to charge to 150 km (93 miles) of range in 30 minutes, but delivered only 79 km, or 49 miles, in that time. NAF said it spent 90 minutes charging it from 2% to 80%. By contrast, the Audi E-Tron 55 quattro charged to 80% in just 27 minutes and held a steady charging curve.

NAF said it learned that most EVs maintain speed until the final few kilometers, when drivers experience a loss of acceleration and caps on the maximum speed. Some vehicle will automatically shut down heating. But it notes that if you shut down an EV at this point and leave it for 30 minutes to an hour, you’ll have enough power to drive for a few more kilometers, enough to hopefully get you home or to a charging station.