Mazda built generation after generation of the Familia, starting with the Giugiaro-styled machines of the 1960s. The first Familia that sold well in North America was called the GLC (for "Great Little Car"), and it began life as a rear-wheel-drive cousin to the RX-7 before the Familia went to a front-wheel-drive platform for the 1981 model year. The GLC name stuck around these parts through 1985 — and I've documented a few discarded examples of these now-rare machines during my junkyard travels — before getting the 323 name starting in the 1986 model year. It's no sweat to find 1990s 323s in junkyards, but I've been scouring the car graveyards of the land for the elusive early 323 and, finally, found this moss-encrusted '86 in a San Francisco Bay Area yard. 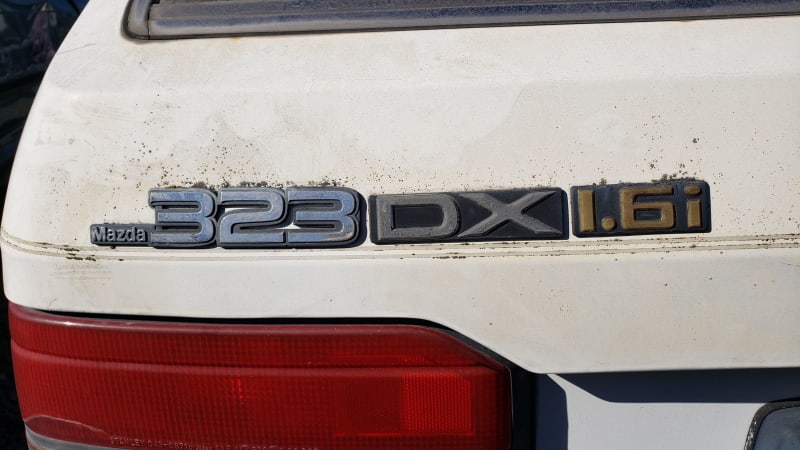 BMW popularized the lower-case-i nomenclature for fuel-injected cars with the first 3-Series back in the 1977 model year, and Mazda wasted no time making "1.6i" badges to tout the futuristic technology under the hood of their low-priced econo-commuter a decade later. 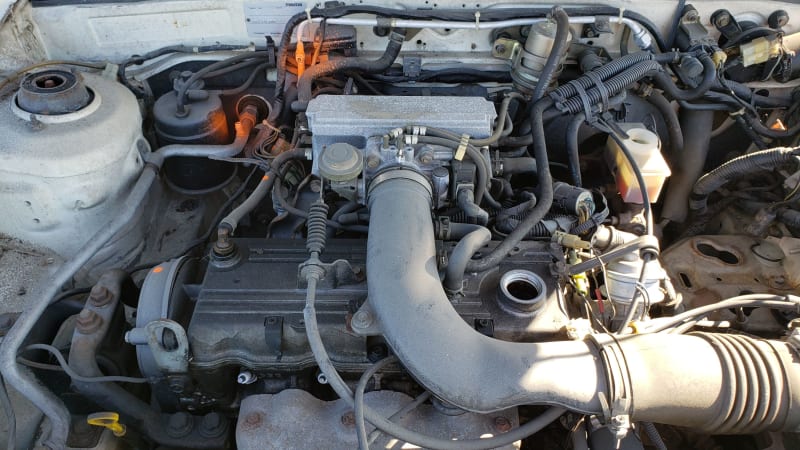 At a time when most Civics had carburetors (and the notorious "Map of the Universe" diagram to untangle the underhood vacuum lines), the electronically fuel-injected engine in this car was a major selling point indeed. It wouldn't be many more years before the wretched Subaru Justy was the final carbureted Japanese car available in America, but this 1.6-liter B6 four-cylinder (which evolved into the engine that, flipped 90 degrees, powered the early Miatas) was high-tech stuff for a cheap car in 1986. Just 84 horsepower, but they were clean and reliable horses. 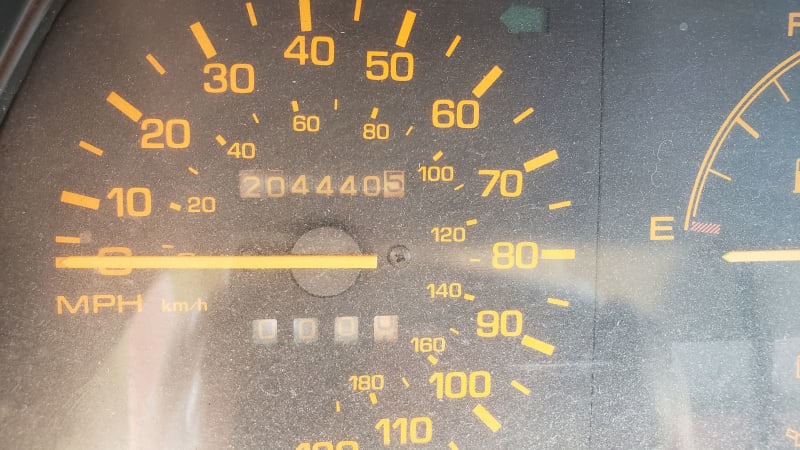 In the middle 1980s, the common perception in North America was that you had to buy a Honda or Toyota if you wanted an affordable car that could make it to 200,000 miles. This 323 held together just as well as most Tercels or Civics from 1986. Of course, I've seen a junkyard RX-7 with 393,854 miles, so you just never know. 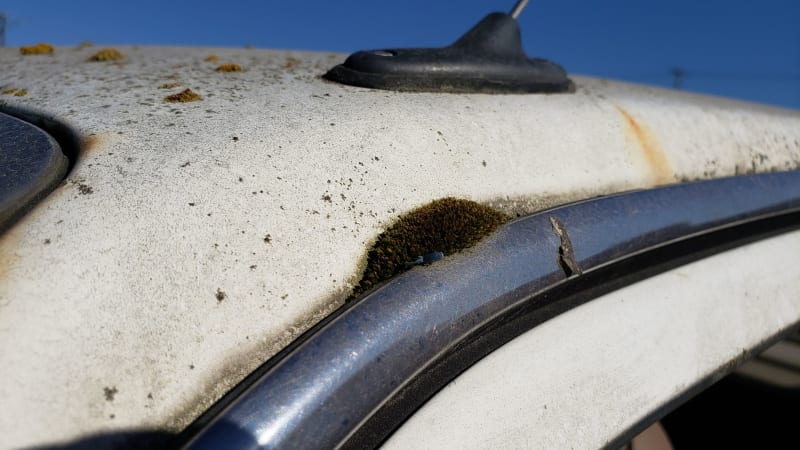 When you see lots of moss and lichens on a car in a Northern California junkyard, you know it spent years — maybe decades — languishing in a shady outdoor spot. Perhaps this car racked up 20,000 miles per year slogging through a harrowing Lodi-to-Sausalito commute, then got parked and forgotten in 1996. We'll never know. 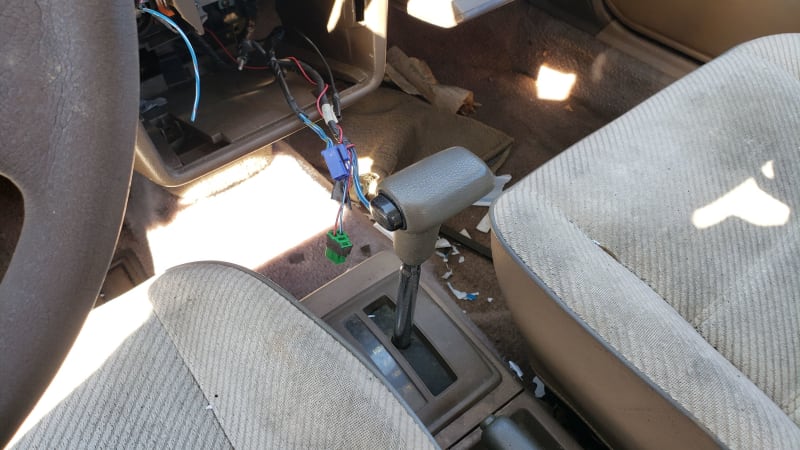 With the optional automatic transmission — nearly every early 323 I've seen had the 5-speed manual — this car wouldn't have been much fun to drive. Point A to Point B would have been fine, though. 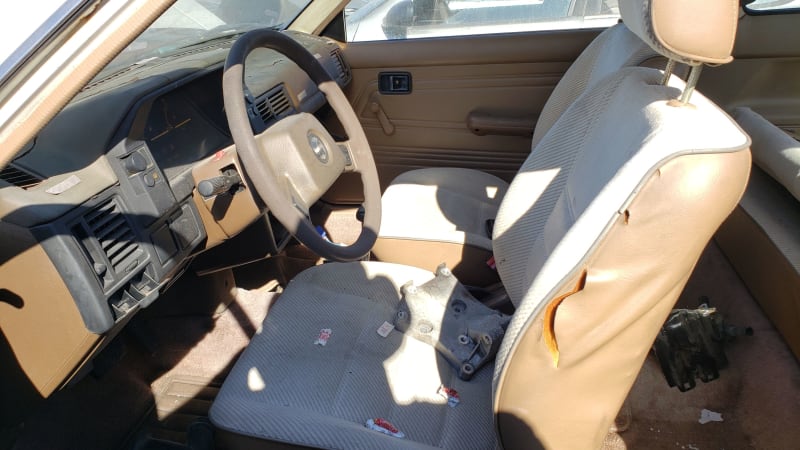 The MSRP on the base 1986 323 DX hatchback came to $6,495, or about $15,200 in 2020 dollars. The similarly-equipped Honda Civic DX hatchback (which didn't have EFI and which generally sold at a hefty dealer markup in 1986, if you could even find one to buy) cost $6,699. Granted, the Civic DX was a lot more enjoyable to drive, but the 323 was a smart move if you wanted to buy an affordable-yet-solid get-to-work car that year. The 323 name stayed alive all the way through 2003, after which the Famila family (get it?) got forced into retirement by the Mazda3.

James Garner approved of the 323 sedan.

Of course, the real gone cats waited until 1988 and then bought the 323 GTX, the turbocharged, all-wheel-drive version of this car. I haven't seen one in a junkyard since about 2005, but I'm keeping my eyes open.