We test the fanciest, most feature-packed CR-V Touring and the changes made for 2020 The CR-V isn't the best in any one area, but is very good in most including its large cabin and cargo hold, comfortable ride and secure handling. It's one weakness is an outdated and frustrating infotainment system.

Over the past two decades, the Honda CR-V has embodied Honda’s reputation for building durable, comfortable and user-friendly family cars that don’t require a ton of unscheduled attention (aside from a brief hiccup with transmission reliability). As it has slowly become the automaker’s bread-and-butter model, Honda’s product planners have put correspondingly increased effort and resources toward keeping the CR-V fresh and competitive.

For the 2020 Honda CR-V, Honda tweaked the styling, added features and simplified its engine offerings in what is the first significant update since this generation dawned for the 2017 model year. There's also a new hybrid offering for those OK paying a Honda a bit more so they can pay oil companies less.

You can read more about these updates (and the CR-V in general) in our comprehensive 2020 Honda CR-V Buying Guide.

We spent our weekend with the CR-V as if it were the family car it is, subjecting it to errands, commuting and a brief (and crisp) road trip to Port Huron, Mich., paying close attention to some of the features we weren’t able to fully explore in our previous drive opportunities. Specifically, we sampled the range-topping CR-V Touring with the optional all-wheel drive system and a price tag of $35,845.

You can find a complete breakdown of each trim level's feature content and pricing on our 2020 CR-V page here on Autoblog, but for $1,700 more than the next-highest EX-L, the Touring adds LED headlights, roof rails, hands-free power liftgate, heated steering wheel, integrated navigation, wireless smartphone charging and a nine-speaker sound system. None of these items are available on other trims.

It was painted Radiant Red over a cream color interior, which admittedly wouldn't be our first choice for a family vehicle (even if leather is better at resisting kiddie-sourced stains than cloth). The light blue CR-V Touring that West Coast Editor James Riswick tested out in Oregon had black leather and seems like a smarter choice. Nevertheless, since both were Tourings, both had a heated steering wheel, which is quickly becoming one of our favorite features. 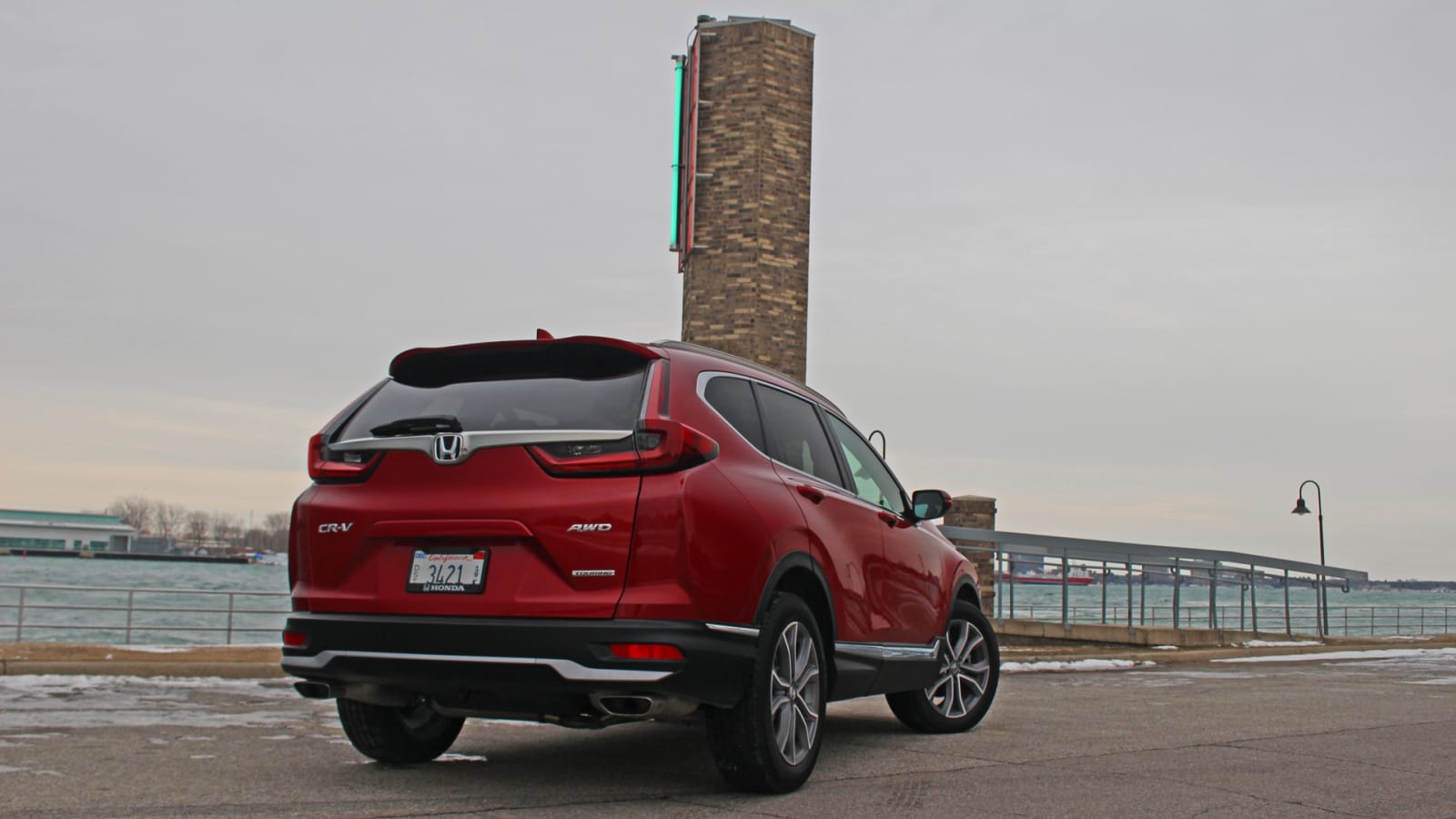 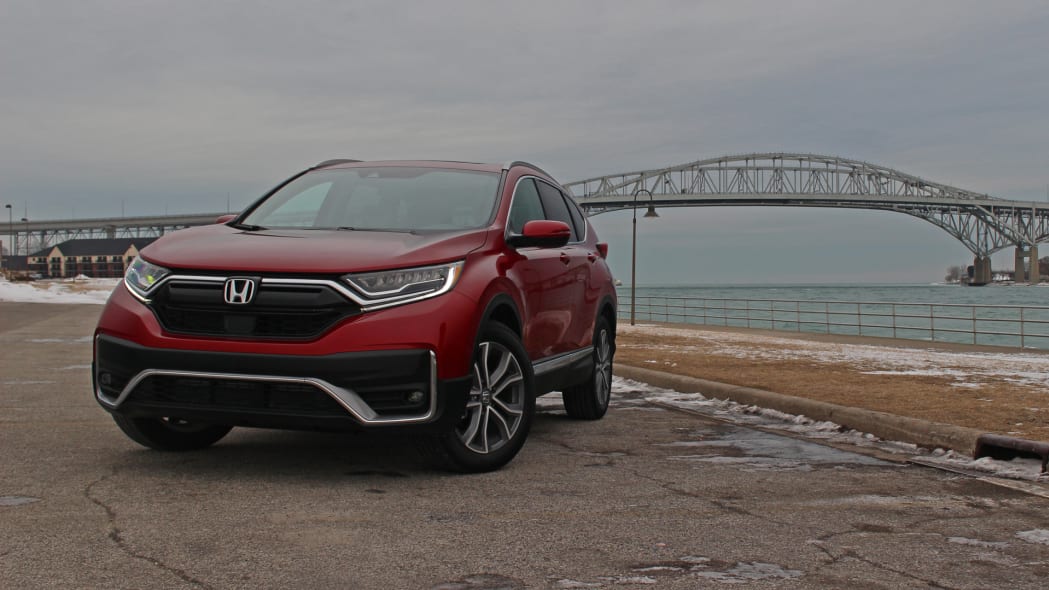 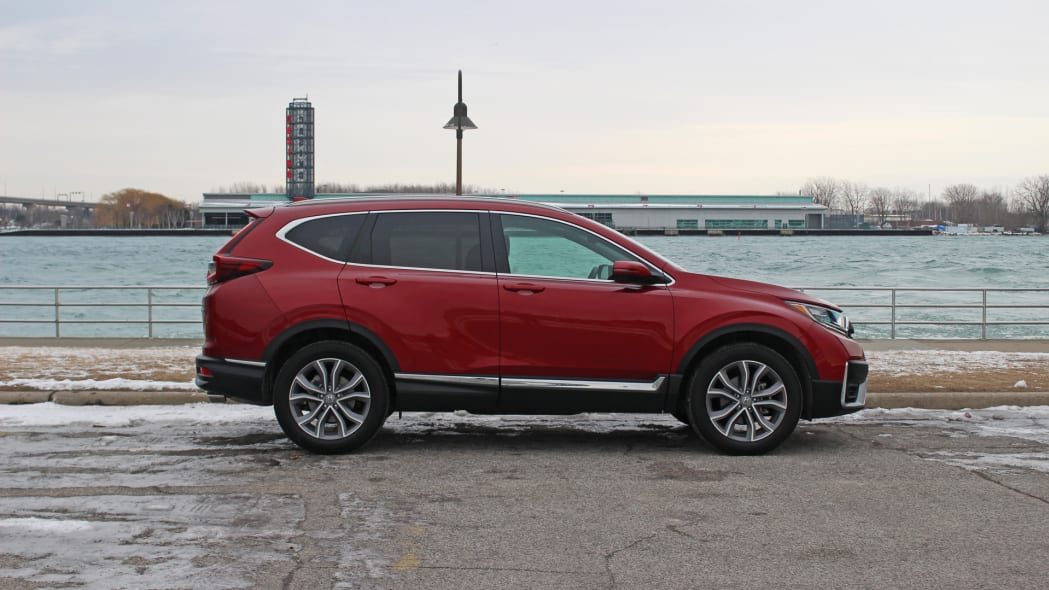 Normally, we’d say brisk acceleration might also pose a threat to your iPhone placement, but brisk acceleration really isn’t the CR-V’s thing. It performs better in the real world than it does on paper thanks to its turbocharged torque, but between its 3,600-pound heft and the power-sapping characteristics of its continuously variable transmission, the CR-V is not what we’d call an athlete. Despite being one of the stronger base engines in the segment, the 1.5-liter’s 190 horsepower and 179 pound-feet of torque can only go so far.

This little turbo-four is now the CR-V’s only available engine (notwithstanding the 212-horsepower electrified system in the CR-V Hybrid), and while that’s good news for bargain shoppers who were previously stuck with the old naturally aspirated 2.4-liter unit in base model CR-Vs, the lack of a more robust engine option remains a disappointment, especially when other automakers offer something more muscular. The Mazda CX-5, Chevrolet Equinox and Ford Escape are examples of competitors who offer higher-output turbo engines in their compact crossovers. Besides its own, more powerful hybrid variant, the Toyota RAV4 goes even further with the plug-in hybrid RAV4 Prime that packs more than 300 horsepower.

Behind the wheel, the CR-V can be coaxed into merging into 70-mph traffic with a good shove of the right foot, and while conditions were not conducive to getting the best fuel economy (it was below freezing with gusting headwinds for much of our longer drive), we still managed to average about 27 mpg against the EPA’s estimates of 27 mpg city, 32 mpg highway and 29 mpg combined. For another data point, Riswick achieved 29.3 mpg during about 100 miles of mixed driving during his own test of a CR-V Touring AWD. Two-wheel drive models should deliver 28 city, 34 highway and 30 combined.

On the Interstate, we had the opportunity to play around with both the Touring's nine-speaker audio system (strong) and semi-autonomous driving aids (a mixed bag). We paired a newer Samsung smartphone via Android Auto to pump low-compression audio through the sound system, which did a solid job for a mainstream setup. Honda has provided both EQ controls and a separate subwoofer gain for those who want finer control over their sound levels.

On the self-driving front, we actually found the CR-V to do a better-than-average job pacing traffic and maintaining set speeds – it's a far better and clearly more advanced system than what you get in Honda's Pilot, Passport and Ridgeline, which have consistently irritated. It did a much better job of slowing and accelerating in a natural manner, and even if the prescribed following distances are a bit conservative, they aren't as frustratingly far-flung as a Toyota RAV4's or Subaru Forester's. There were times, however, when cars in adjacent lanes would prompt the system to back off slightly. We experienced this most often in long, sweeping corners where no braking was necessary and cars to the left or right might be more prone to wandering close to the lane markers. 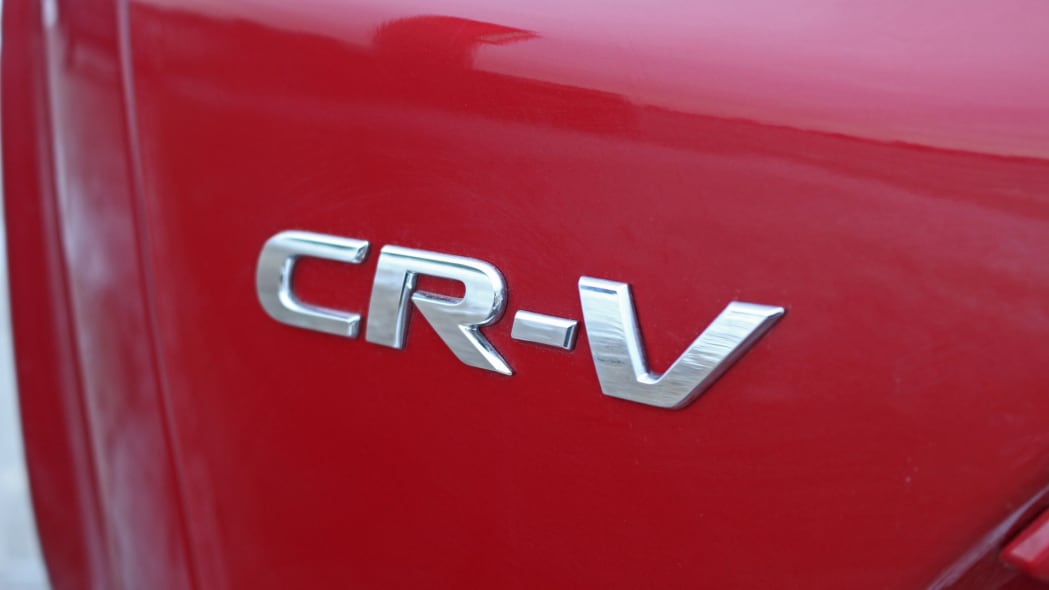 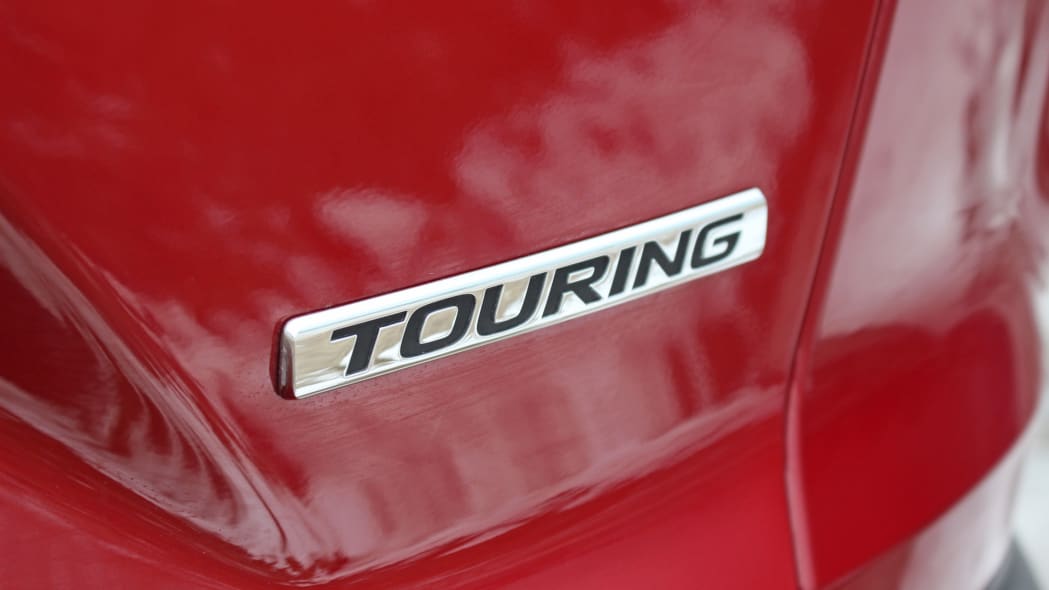 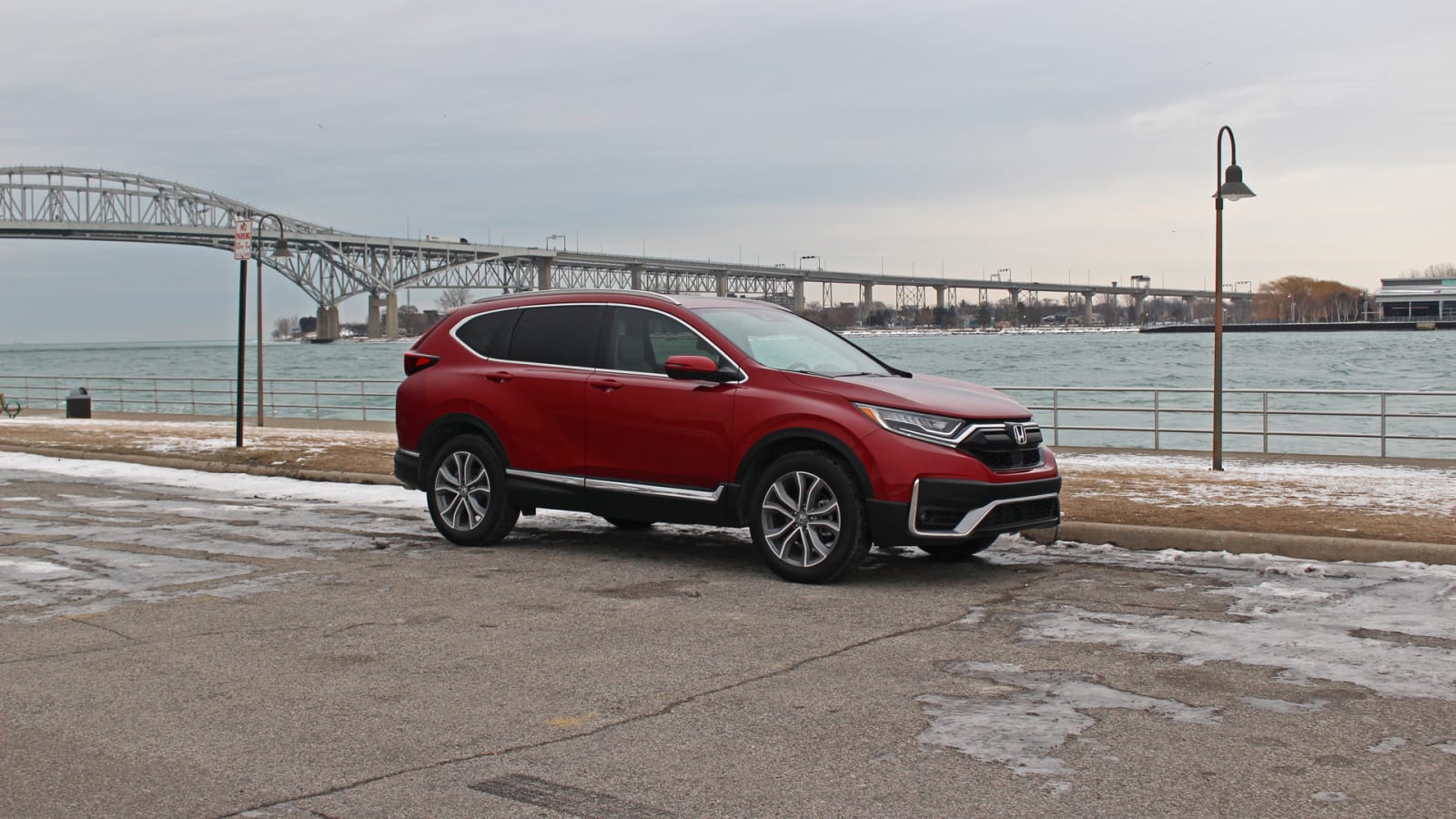 The system's steering assist also worked well with adaptive cruise control, allowing us to keep just a cursory finger on the wheel while the system did much of the steering, including through gentle highway bends. The lane departure warning system is less successful, though, as it's prone to flashing large, yellow warnings in the cluster even when lane changes are accompanied by a turn signal. This is problematic for two reasons. The first, and most obvious, is that the CR-V’s computer brain is essentially crying wolf, alerting the driver to a danger that doesn’t exist. Over time, drivers could grow numb to these warnings, and potentially ignore one that is actually valid.

The second issue is that even once we learned that these alerts are effectively unavoidable, they still served as a significant visual distraction, pulling our eyes toward the gauge cluster at what could be a critical moment in a merge or lane change. A fraction of a second is all it takes for things to go south in those situations, and we’re not convinced this feature is fully fleshed-out.

Beyond that, we have few complaints about the CR-V. It is roomy, comfortable, and offers 37.6 cubic feet of cargo space even with the second row set up for passengers. As you'll see in Riswick's upcoming Luggage Test, that amounts to being a hair better than what you get in a the brand-new Toyota RAV4. It's also about 2 cubic-feet less than what is offered by the aging Nissan Rogue.

The Touring model’s $35,000-plus price tag may be off-putting, but it packs a lot of day-to-day convenience. The hands-free power tailgate and heated steering wheel proved invaluable in the cold, grimy Michigan winter, and wireless device charging is handy no matter where you live. And like every 2020 Honda CR-V, it may not be the sort of car one falls in love with, but we challenge the typical family car buyer to identify a conventional task it can’t handle as well as — or better than — its competitors. It’s not a driver’s car, nor is it particularly interesting to look at, but setting those aside, Honda’s staple crossover checks just about every box.