GM’s murky and somewhat secretive electric car plan is falling into place, as the company dumped a massive amount of information about what’s in the pipeline at an event at its Warren, Michigan campus today. New EVs are going to be popping up across the GM brand lineup, with new entries from Chevrolet, Cadillac, GMC and Buick in progress. We also learned some big news about GM’s new Ultium battery tech today, but check out this story for all of those nitty-gritty details.

The electric vehicle onslaught will begin with the Cadillac Lyriq, an electric SUV that’s already been teased out. Naming it the Lyriq is the news today. No explanation for the name was provided, so we’ll have to wait for April to learn more. GM didn’t specifically say if the Lyriq would be launched at the NY Auto Show, but that show (assuming coronavirus doesn’t cancel it) will begin on April 8 this year. 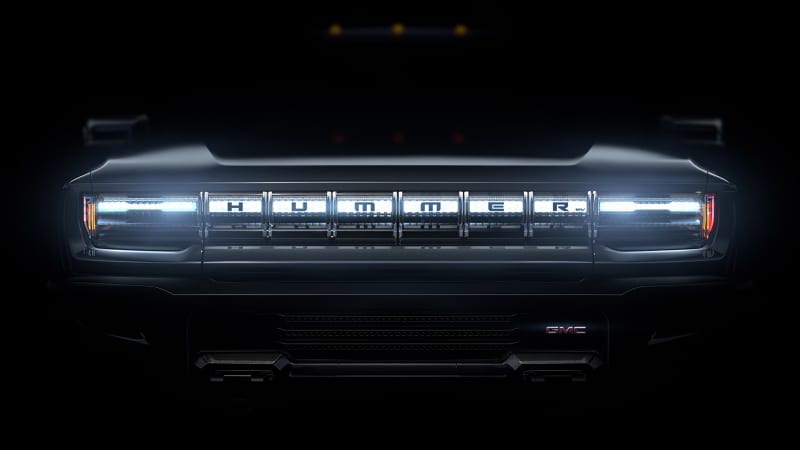 Next up in the order of events is the GMC Hummer electric truck that we know will be launching on May 20. This truck will use GM’s modular Ultium battery technology. However, the wait to buy a GMC Hummer will be a long one, as the truck isn’t going to dive into production until fall 2021 at GM’s Detroit-Hamtramck plant. GM revealed that its new modular Ultium batteries can be configured anywhere from a 50 kWh pack to a 200 kWh pack depending on the application. Range is estimated to be about 400 miles on the upper end with the largest battery pack, and GM continues to boast about a 0-60 mph acceleration time of three seconds. Charging estimates for the Ultium battery-equipped Hummer EV were also provided. GM says its truck platform will have 800-volt battery packs and be capable of 350 kW fast-charging. Time estimates weren’t given, but those numbers suggest the truck will be a rapid charger.

The Hummer truck on hand, which was the same that previously starred in GMC's Super Bowl spot, showed off removable roof panels that store in the frunk, as well as what appeared to be a version of GMC's Multi-Pro tailgate. It also featured sail panels on the sides, similar to those in front of the bed of the Chevy Avalanche.

In addition to the Hummer, expect to see a couple Chevys launching. GM says the refreshed Bolt EV will be launched “in late 2020” with a refreshed interior and what appear to be thicker front seats. After the regular Bolt EV launches, we’ll see the 2022 Bolt EUV launch in summer 2021, which looks much like the standard Bolt, but with a three-inch longer wheelbase (a GM representative told us those extra inches go toward improving the rear legroom). It’ll also be equipped with Super Cruise, becoming the first non-Cadillac vehicle in GM’s lineup to ship with the semi-autonomous driving technology. GM claims that by 2023, there will be 22 cars across its brands that are equipped with Super Cruise.

Beyond that, GM had a number of representations of other future all-electric models on hand at the event — essentially clay models surrounded by mockup body panels — all intended for production, but without set launch dates. Beside the Cadillac Lyriq was a similar-sized Chevrolet crossover. Two Buicks took the stage, one a mid-sized crossover roughly the same size as the Cadillac Lyriq and aforementioned Chevy, the other a smaller crossover that looked similar in size and shape to the Chevrolet Bolt. GM showed two other truck-based EVs based on the Hummer. One was a smaller wheelbase Hummer SUV, complete with a giant, rear-mounted spare tire. The other was a Cadillac SUV, reminiscent of the Escalade, with enormous, 24-inch wheels.

Finally, GM also took the wraps off another electric Cadillac, a hand-built halo flagship sedan called the Celestiq. GM didn't give a timeline for this car, but says it is fully intended for small-scale production, representing the "ultimate luxury experience" with high levels of personalization. The Celestiq features a long sloping fast-back-like roofline, with a long wheelbase and short overhangs. The model on display boasted 23-inch wheels. Most of the interior was hidden, but images shown to attendees depicted four seats, a pillar-to-pillar front screen that made up the instrument cluster and infotainment screen, a pair of touchscreen interfaces on the rear of the front seats, as well as touchscreen controls between the left and right seats of both rows.

Cameras weren't allowed at this event, so we'll have to wait a bit longer to share any images. But with so many electrified offerings in the works from GM, we expect to see some interesting developments in fairly short order.

Zac Palmer and John Beltz Snyder contributed to this report.