Geneva may be canceled, but we caught an early glimpse at BMW’s electrified concept

THOUSAND OAKS, Calif. — Our brave new world of digital debuts and virtual press conferences makes the spread of automotive news instant and effortless. But there’s no substitute for laying eyes on fresh sheetmetal in the flesh.

Thanks to a rare case of early timing and the unprecedented cancellation of the 2020 Geneva Motor Show due to the coronavirus scare, we were lucky to be one of the few outlets in the world to preview the BMW Concept i4 well in advance of the Swiss (non) event. Here’s what we saw at the Designworks studio in Thousand Oaks, Calif., before the priceless concept was air-freighted to Europe for the show that never was.

First, some background. The Concept i4 was created to set the stage for the i4, BMW’s fully electrified, coupé-like sedan that will see production in 2022. The BEV four-door is BMW’s first pure EV to share a chassis with an internal combustion offering, in this case the 4 Series Gran Coupé. The i4 strays from the i brand’s expensive and difficult to produce carbon fiber chassis, bringing electrification into a more attainable realm. Though this concept doesn’t necessarily represent the final product, don’t be surprised if you find many of its styling cues and unique features in the 2022 street car. 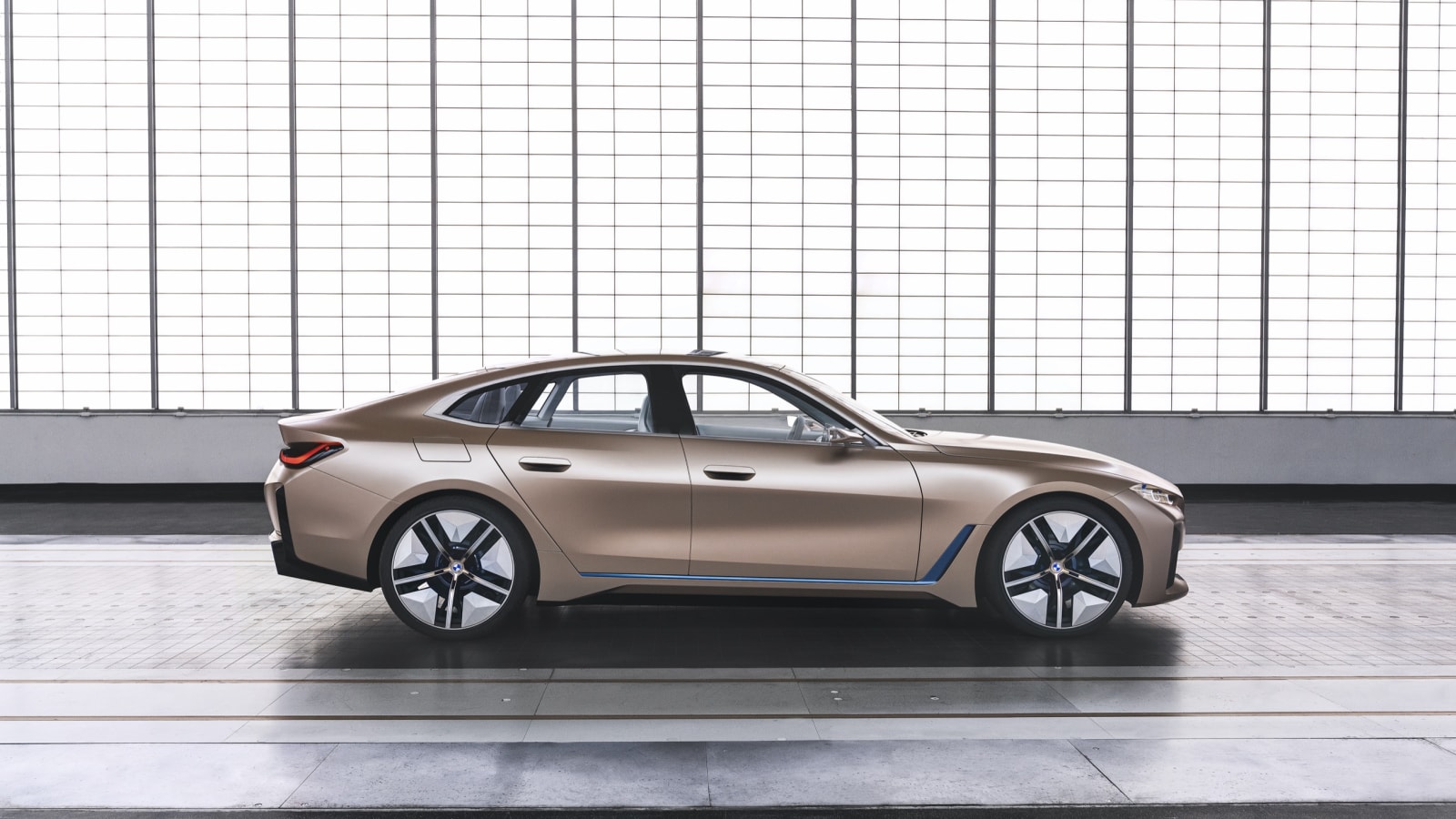 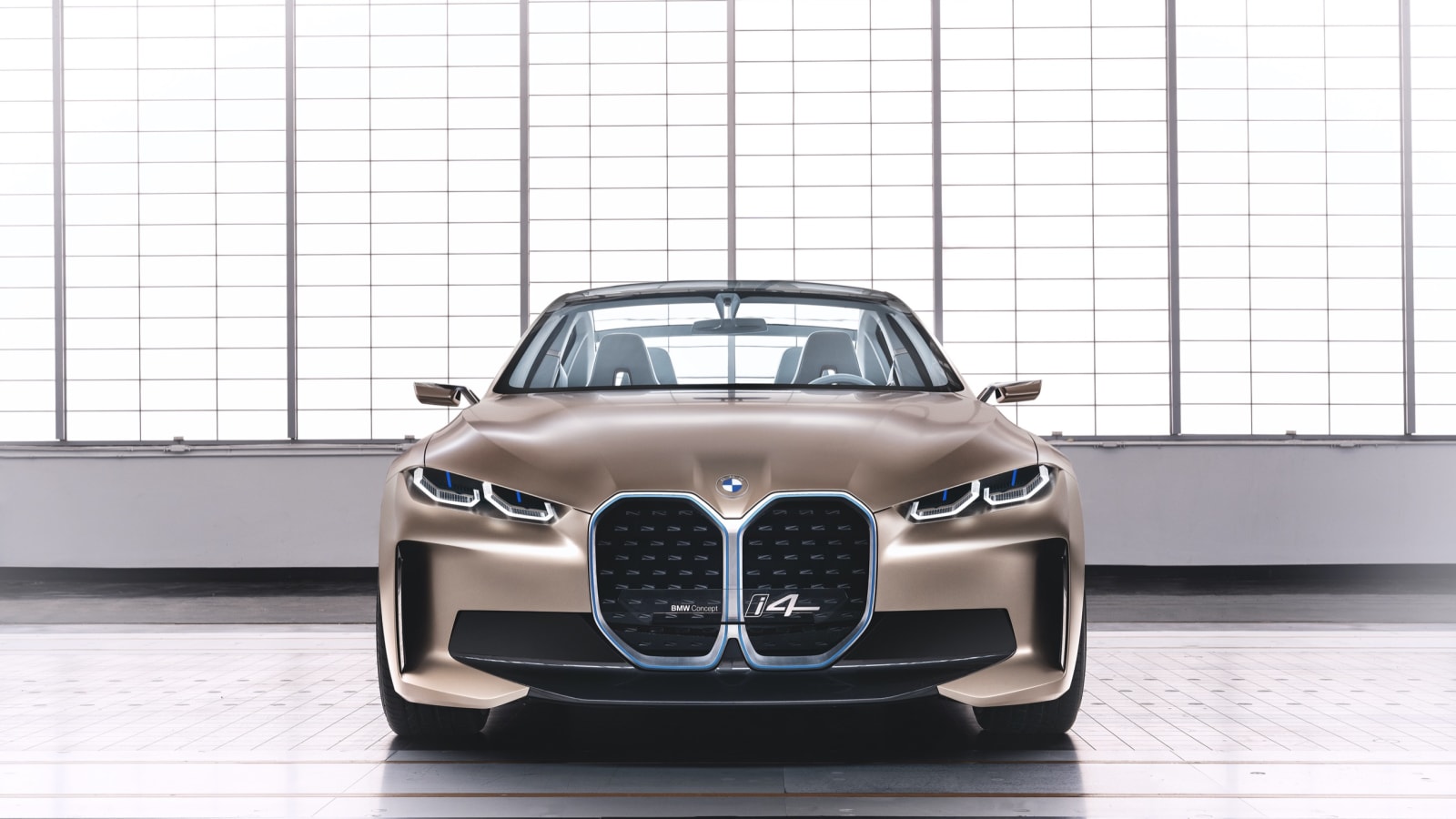 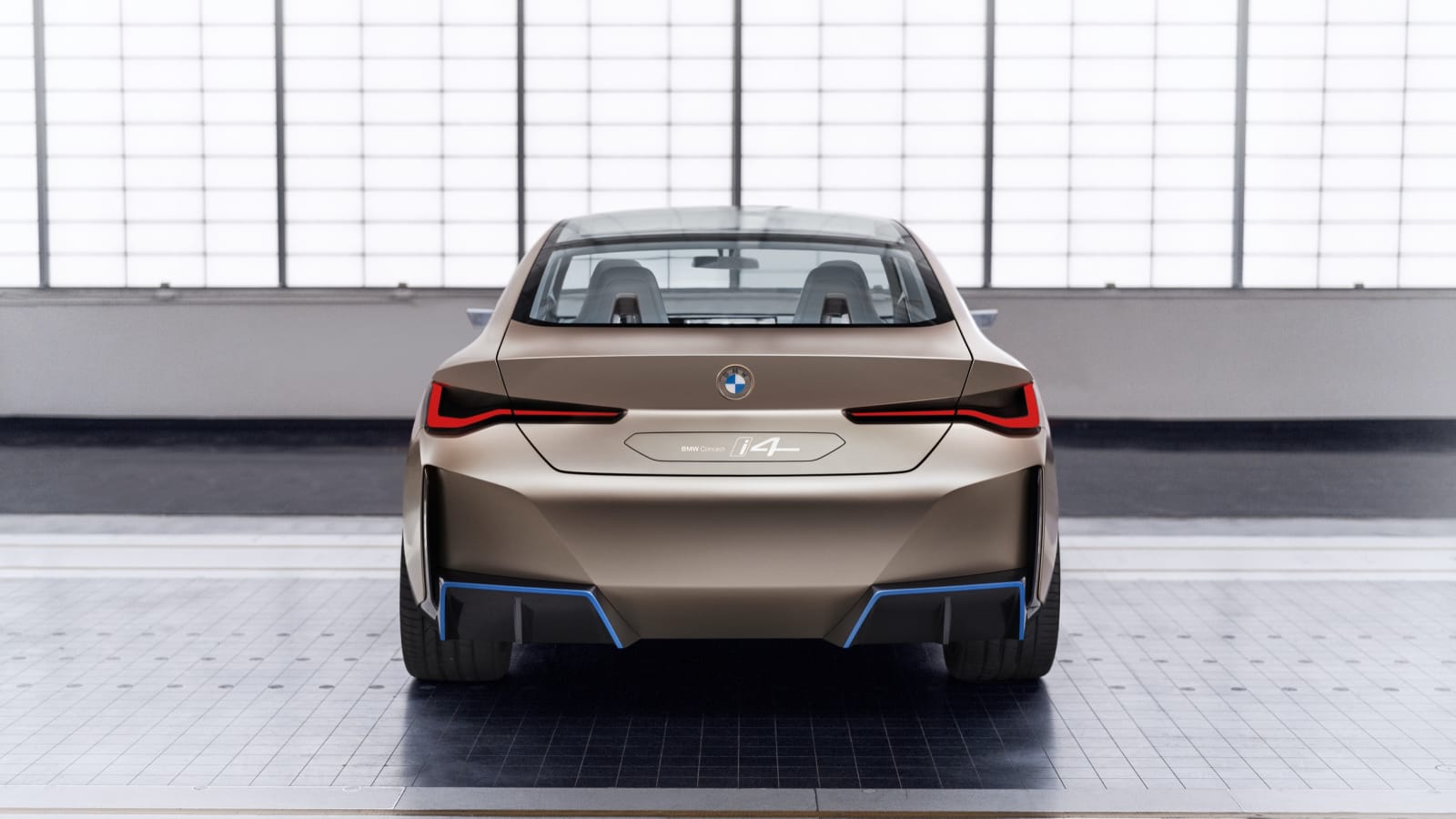 The upcoming i4 production car promises some compelling stats: 0 to 60 miles per hour in around 4 seconds, up to 530 horsepower, and most crucially, a compelling 373 miles of range. But specs aren’t everything, which is why BMW tapped Designworks, the consultancy responsible for everything from the Rolls-Royce Phantom to private jet interiors, to build the show car that prefigures the production i4.

In the viewing room of the Designworks studio, the i4 stands its ground with a broad-shouldered, bulldog-like stance. A massive double-kidney grille dominates the front end in a way that makes the 7 Series’ ginormous nostrils seem tame in comparison. Except this time, they’re somehow not quite as offensive. Maybe it’s because they’re more thoughtfully integrated into the snout. Or perhaps our eyes are simply getting used to the oversized feature. But the i4’s grilles also serve an unexpected purpose in this application. Nicknamed an “intelligent surface,” the openings hide the myriad radar and lidar sensors used for driver assistance, a practical way to integrate hardware that would otherwise clutter up the car’s front end. Flanking the grilles are blade-like headlamps that lack any sort of protective shielding, a feature you better believe won’t meet international homologation regulations.

Front, top, and center is a novel reinterpretation of the BMW roundel, this time affixing the blue and negative space logo over a clear background that enables the i4’s faint gold paint to shine through. It’s a cool, forward-thinking twist on the familiar logo that reflects Designworks’ progressive ethos. “We’re a bit more rebellious with [the] i [brand],” BMWi design head Kai Langer reveals. “We were thinking about a new way reinterpret the logo, and brought the minimum information you need to [represent] it.” 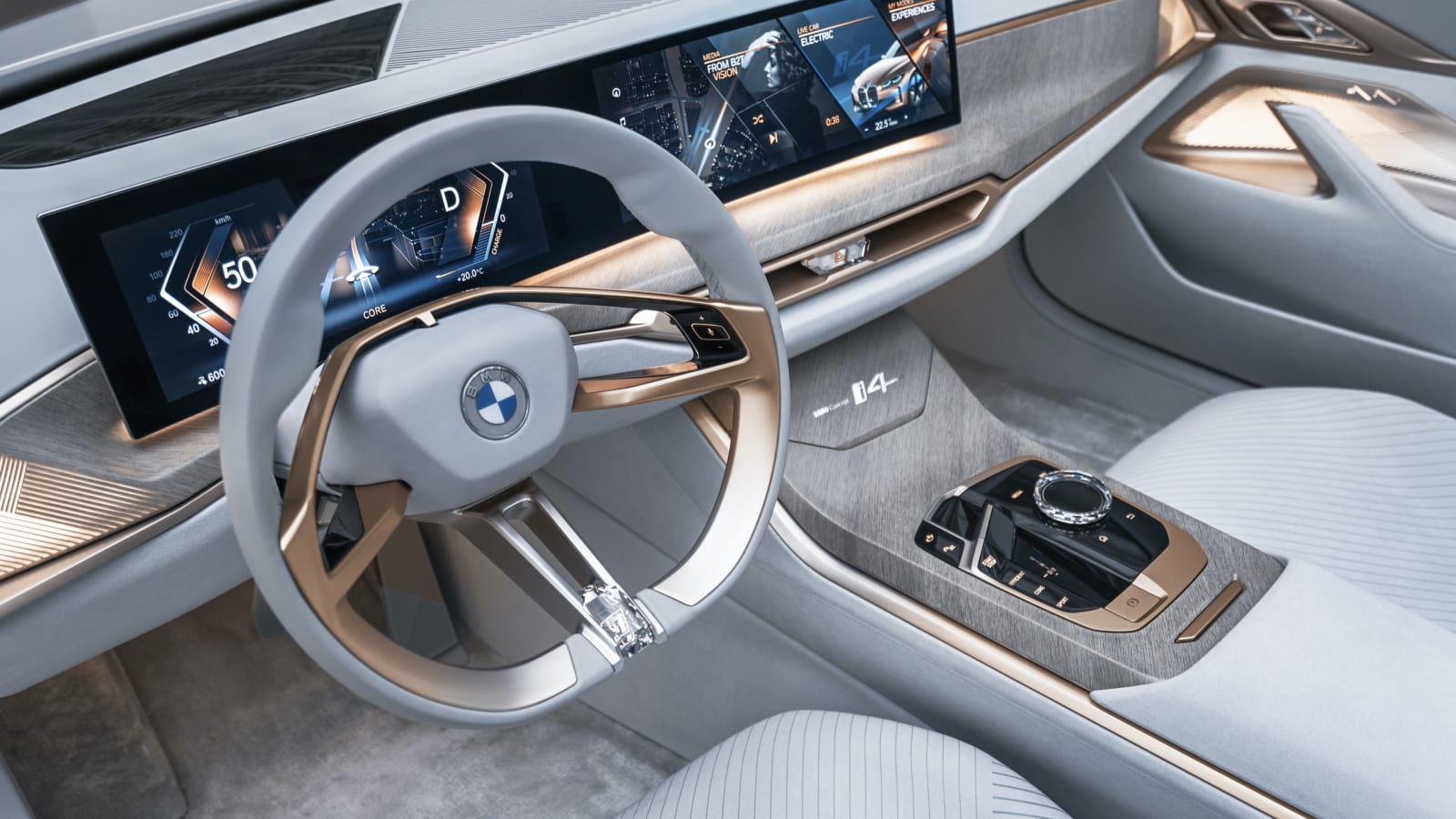 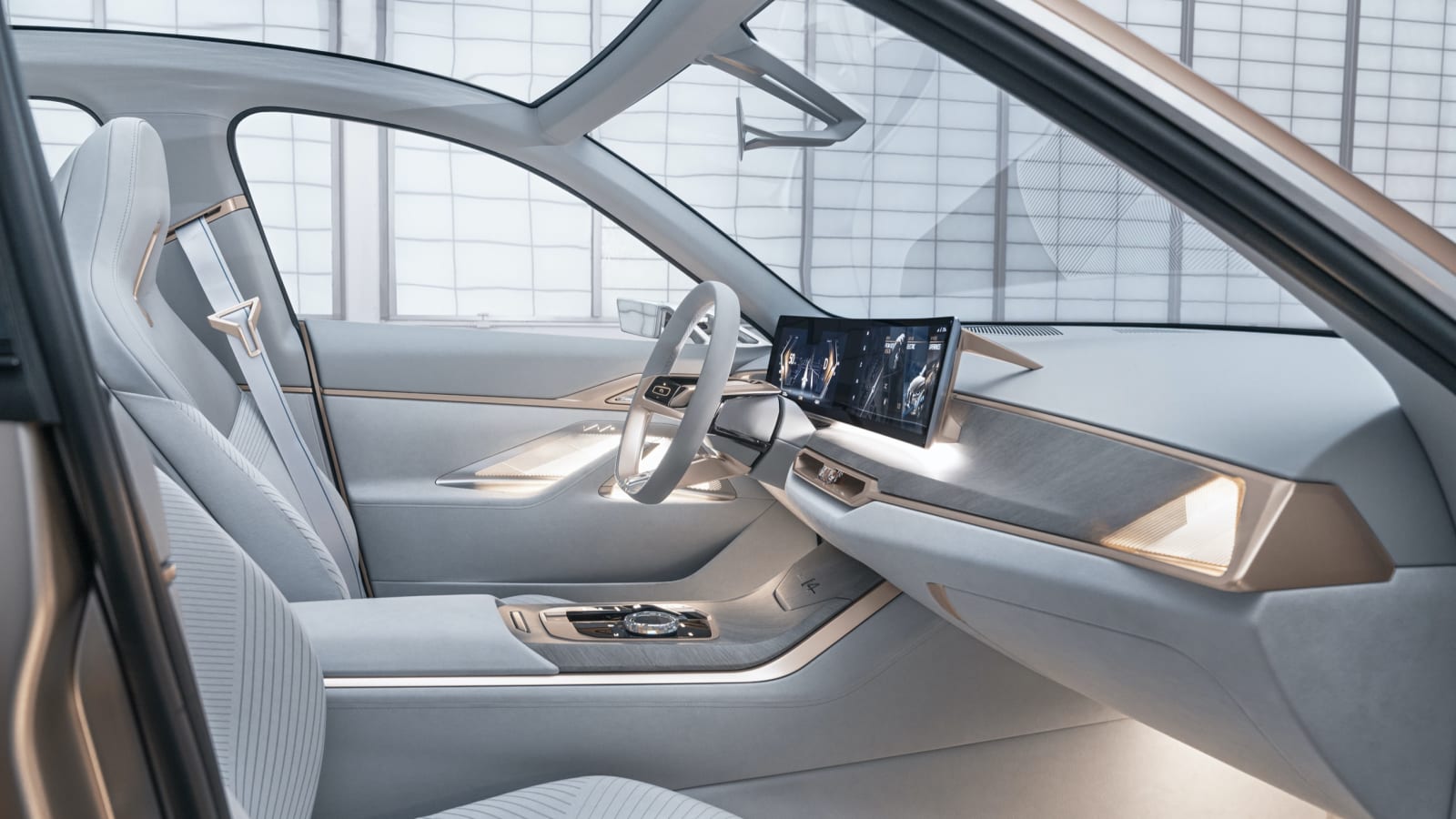 That theme of restraint plays through to the interior as well, where plush printed microfiber upholstery enables subtle striping and minimalism, drawing attention to a thin, slightly curved touchscreen that arcs gently across the driver’s side of the dashboard. The pair of 12-inch displays look gorgeous, and don’t fight for attention with much other hardware; apart from the Swarovski iDrive wheel and a few surrounding buttons, this gold-accented space is lush yet sparse in a way no Tesla has managed to pull off. There are tasteful, fine-grain finishes, an airy, retro-riffic steering wheel and an indirect lighting system that casts hues in the door panels and footwells based on driving mode. The glow of lighting also highlights that ultra-wide screen, which seems to hover above the dash.

The i4’s exterior proportions are similarly restrained, with clean, subtly faceted sheetmetal that manages to be angular but not necessarily overtly sharp. When examining these shapes in person your eye tends to roll across the silhouette, which flows across the clear-roofed greenhouse with an easy rhythm that tapers off with a fast, swept back C-pillar. Out back, an angular rear diffuser hints at the vehicle’s aerodynamic aspirations, yet isn’t cluttered with any familiar tailpipe hardware.

If nothing else, seeing the BMW Concept i4 in person reflects how the Bavarian carmaker is willing to take a big step forward while keeping one foot firmly planted in the present. Sure, the four-door EV lacks the iconoclastic audacity of the i3 and i8. But the clear roundel, which may or may not make it into production, encapsulates the attitude of modernity that’s been injected into the otherwise familiar 4 Series Gran Coupe platform. Electric car enthusiasts, many of which are desperate for an alternative to Elon Musk’s offerings, are hungry for that exciting new EV that’s driver-focused and easy on the eyes. If the production i4 captures a fraction of the concept car’s cool factor, it should draw a whole new kind of enthusiast to the BMW brand.