BORREGO SPRINGS, Calif. — That the most significant changes to the 2020 Audi A4 lineup, which includes the A4, A4 Allroad and S4, are its revised sheetmetal and a new infotainment system should tell us something: We’re likely halfway through the lifecycle of the brand’s bread-and-butter sport sedan. So let’s just go ahead and call this what it is, a mid-cycle refresh.

Of course, we can’t know with certainty when a full redesign will come, especially given that the Q5 crossover now outsells the A4 and S4 combined by a ratio of more than 2-to-1. Perhaps Audi could eke out an extra year or two as it focuses on crossovers and EVs, but given the longevity of the previous A4 (2008 - 2016), it’s probably a safe bet we're at the mid-point, and with the revisions made for 2020, the A4 family is still worth a look and a drive. We visited San Diego County’s deserts and mountains to get both.

Nearly every body panel on the A4 and S4 is reshaped to better reflect the latest Audi design language. In fact, only the roof panel remains from the 2017-2019 car. The sloping hoodline curves downward at its leading edge before meeting the grille in a shape not unlike the 2020 Hyundai Sonata. Or possibly the Sonata design is derivative of the previous A4. Either way, there’s undeniable similarity here. Every A4 variant gets Audi’s new MIB 3 infotainment system (adding navigation to it is optional), which is faster than the second-generation system and comes with a higher-resolution, 10.1-inch enlarged touchscreen that sprouts inelegantly from the dash. It's also now the primary source of input. The old rotary controller and accompanying menu controls are no more, leaving behind a conspicuous covered bin where they once resided. LED headlights are also now standard across the board.

Powertrains remain the same as last year as well. The lineup starts with the 2.0-liter turbocharged four-cylinder in the front-drive A4 40 TFSI, which is good for 188 horsepower and 236 pound-feet of torque, and returns an exceptional 27 mpg city, 35 mpg highway and 30 mpg combined. The same engine tuned for 248 hp and 273 lb-ft of torque powers the all-wheel-drive A4 45 TFSI Quattro (24/32/27 mpg) and every A4 Allroad Quattro (23/31/26 mpg). All three use a seven-speed dual-clutch transmission.

The S4, the only variant we drove, pairs a turbocharged 3.0-liter V6 with Quattro all-wheel drive and an eight-speed automatic transmission. The mill produces 349 hp and 369 lb-ft of torque, and Audi claims it’ll propel the sedan to 60 mph in 4.4 seconds, which is, well, pretty quick. 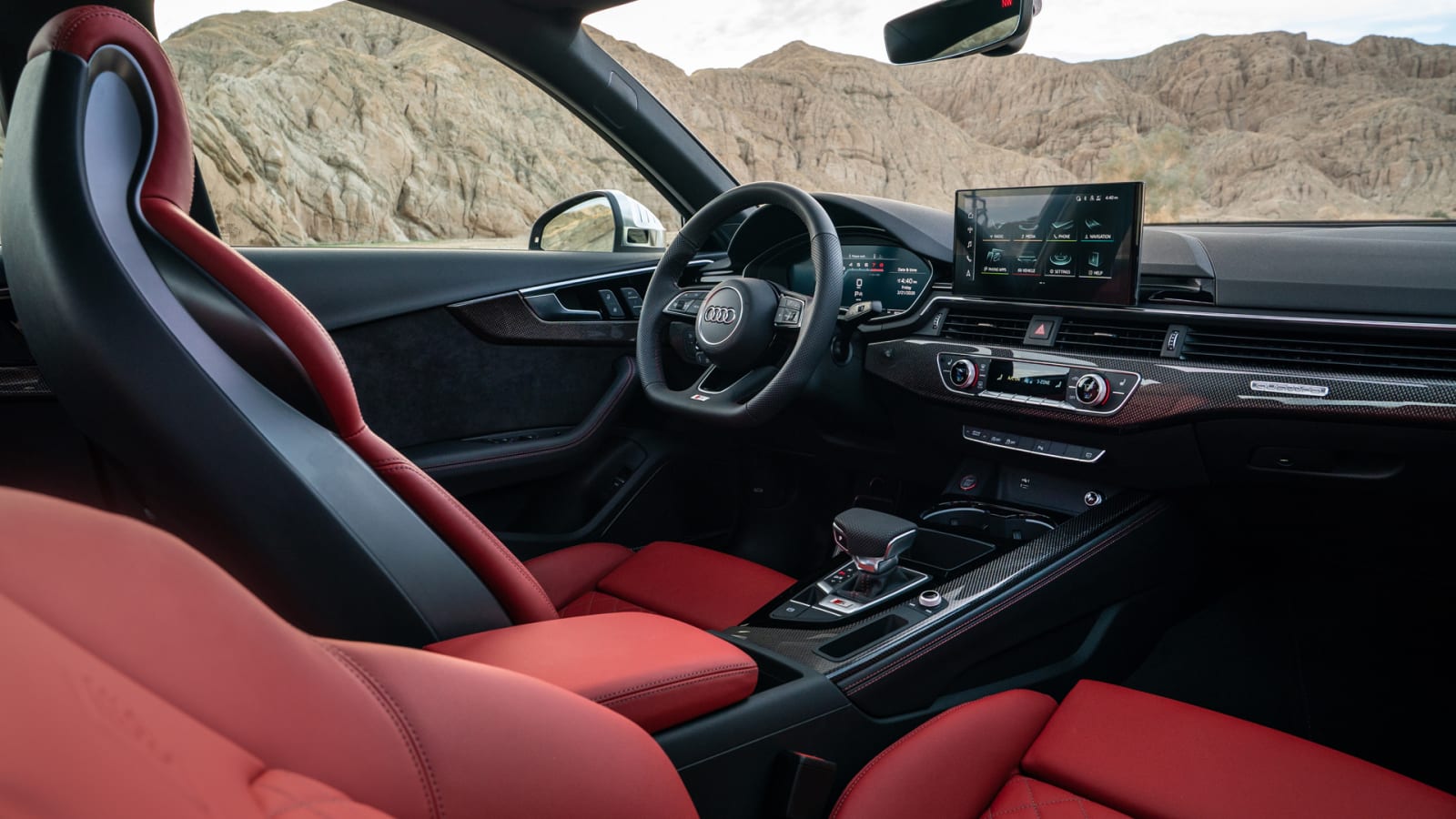 We drove the S4 on California’s county highway S22, which climbs more than 3,200 vertical feet over 10 miles, rising out of the dusty village of Borrego Springs to San Diego County’s high desert. It’s a serpentine ribbon of pavement laid down for the purpose of exploring steering feel and chassis balance.

Indulging the grip from the S4’s optional 19-inch Bridgestone Potenza S001 summer tires (18-inch summer tires are standard) means late commitment to the brake pedal and counting on it to scrub momentum from the 3,847-pound sedan at each corner. ZF’s eight-speed automatic obediently snapped off rev-matched downshifts using the wheel-mounted paddles, and the six-piston front brakes weren’t troubled with the abuse.

Explaining Audi’s steering performance to anyone who’s not driven an Audi in several generations is like explaining quantum physics to a duck. It’s a nuanced affair, and one that’s open to interpretation. And, in the end, it’s probably pointless. Nevertheless, the S4’s steering is precise. It’s highly accurate, lacking slack or indifference, but determining what might happen as the grip limit nears, well, that’s the interpretation piece of this equation. It’s a grey area that we prefer not to explore when there’s a concrete mixer or a Suburban just across the double yellow. So steer clear (yes, pun intended) of those limits, and the S4 will produce huge smiles. 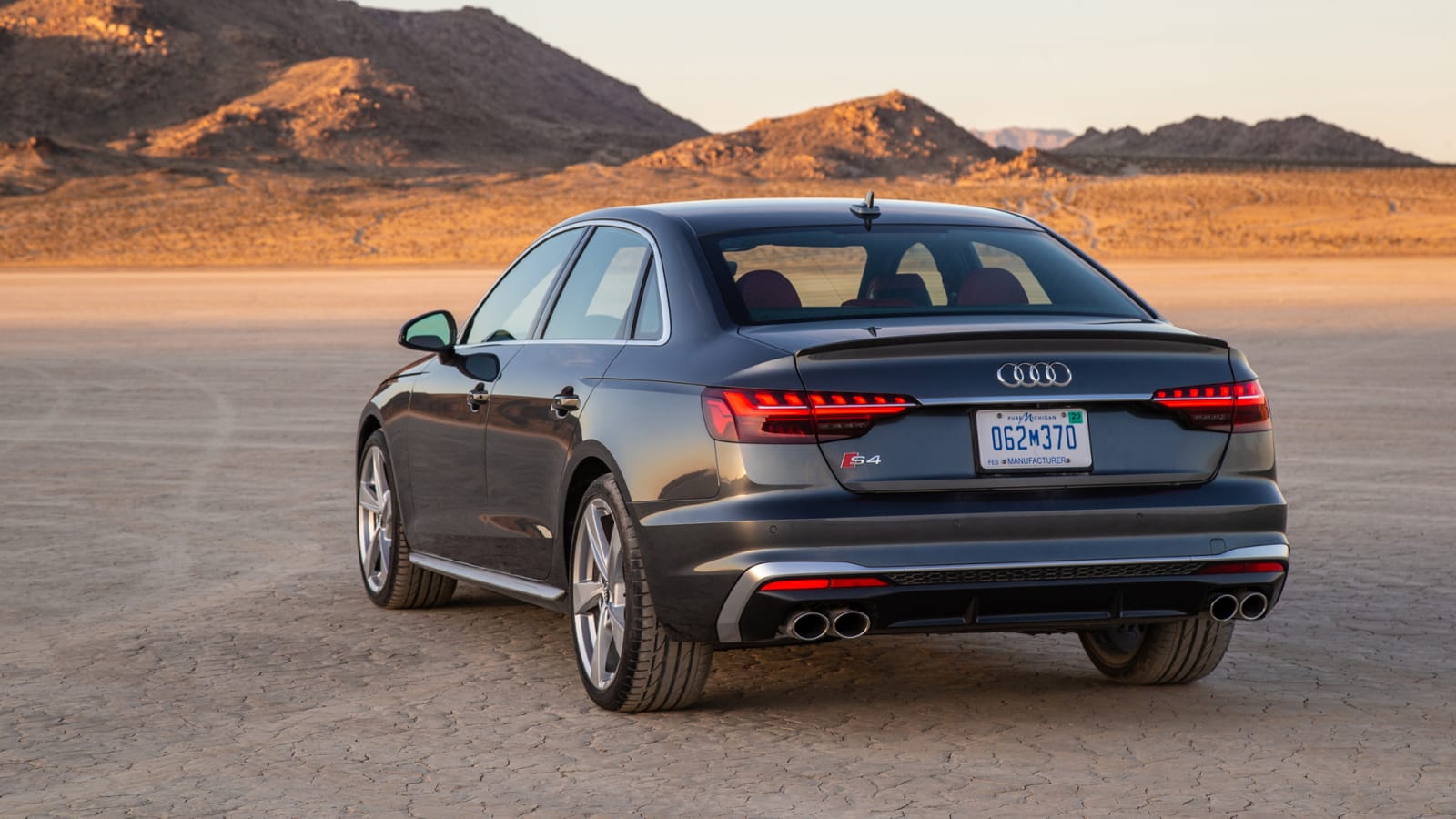 Chassis balance isn't exactly ideal, but it is adjustable. The car we drove was fitted with the optional S sport package ($2,500), which adds adaptive dampers and a torque-vectoring rear differential capable of sending nearly all of the available torque to one wheel. When in Dynamic mode, even rolling smoothly into the throttle at corner exit produced a noticeable yaw effect that was hard to predict. Whether this was the differential doing its thing or the boost rolling up rapidly is impossible to know, but some fiddling with the throttle sensitivity and sport differential setting in the Individual Drive Select mode would probably help.

In the end, these are nitpicks on a car that will make nearly every driver happy. It’s a well-finished, quick, high-tech and tunable sedan that just happens to look better than it did last year. As the most expensive member of the A4 family it starts at $50,875 and is available now. The tweaks for 2020 might be small, but they’re keeping the A4 relevant, even in a world where that’s an ever-increasing challenge for any car. 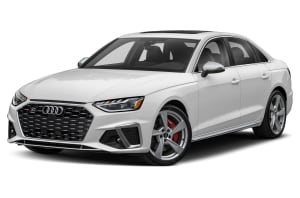