If you're anything like us, you probably put just about no thought at all into buying an ice scraper. After all, most are basically the same. They've got a scraper on one end and a brush on the other. Might as well just pick one up at the checkout line as an afterthought, right? That's how we used to feel, but we've started thinking differently after testing out the SnoShark. In this quick video review, Autoblog Producer Amr Sayour unboxes and tests this heavy duty and extremely practical snow removal tool. It's certainly anything but average. Check out the video above to see why the SnoShark has Amr more excited than ever to clean the snow off of his car. 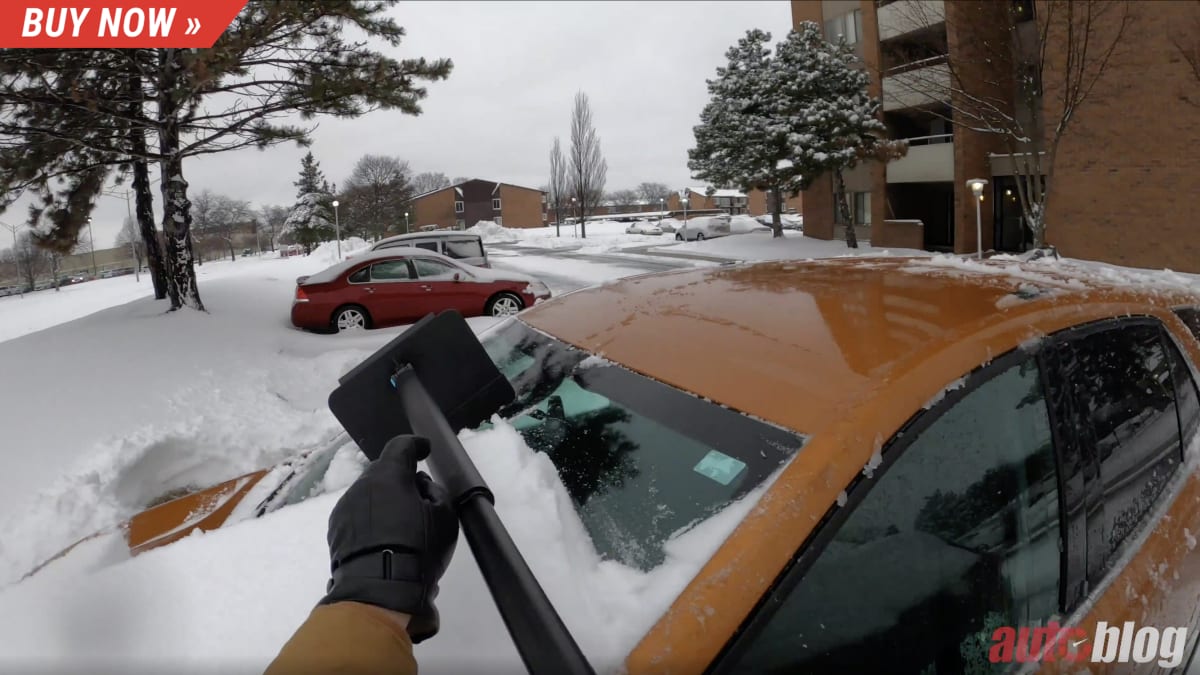 Transcript: How’s it going, Autobloggers! Amr here. What we have today is something unique. It’s not the baby shark, or a mommy shark, or even a daddy shark. It's the SnoShark. SnoShark sent us two; A standard version for your average-sized cars and crossovers and an XL version designed to tackle the bigger vehicles like campers, trucks, SUVs, and even semis.

SnoShark’s slogan is the “Sno tool reinvented,” and they sent us the XL in this storage bag with a magnetic flap. We've got some verbiage here, a couple of stickers, and here it is: the SnoShark. This is the XL version, so let’s get a closer look at this thing. Branding so large, I love it. You got SnoShark.com in the front, patent-pending on the back. I love the branding, I love the big words. It feels like a solid snow remover. So let's read a little bit about this. SnoShark XL is backed up by a trusted lifetime warranty, that’s actually really cool that they do offer that right here. Non-abrasive paddle, heavy-duty, lightweight, extendable handle designed to tackle trucks, vans, campers, semis, and SUVs. Extends to 54 inches and compacts to 24 inches.

Let’s look on the back. They did include instructions on how to actually operate the SnoShark, but once you pick it up it looks quite easy to use. You've got two buttons, one in the back for extending, and one right here next to the paddle that you can press to start removing the snow. Press it one more time to remove the ice that’s on the windshield. The storage bag is sold separately, but they did include it with the test sample so you guys could see what it actually looks like.

It came with a sticker that says snoshark.com and their logo in the back in white, snoshark.com as well. Let’s talk first impressions. It doesn’t look like a normal snow remover with the brush on one end and the ice scraper on the other. What SnoShark did is combine the two together on a single panel with a long ice scraper on one edge of the panel and a non-abrasive paddle with a foam sleeve on the other end. With the press of a button, you can switch between the two with ease. But what’s really unique is that it extends to cover up a wider area for removing a large amount of snow with one single stroke, and when you’re done it collapses down for easy storage.

The standard version extends to 39 inches and the XL extends to 54 inches. That’s 4½ feet of extra reach. That’s nuts! The standard starts at $44.99 while the XL is $54.99. If you’re really lazy and on the couch and the TV remote is on the other side, just use one of these bad boys to get it, it’s really long. The first thing that I noticed is that the ice scraper and the paddle are larger than the normal ones. Usually, ice scrapers, the traditional ones, in fact are half the size of the 8-inch ice scraper that they have here.

They also included a rubber mat right here for handling so it doesn’t slip out of your hand, and I love the fact that it’s easy to switch. It’s not complicated, it’s not weird. It’s so easy to switch from one to the other and with very little effort, really. Press the button and it’s gonna fall right out, that’s actually really cool. And the other thing too, the extension! This is great, this is so smart and it’s all metal. Everything is strong. I love how it just extends from one area to the other and it gives you the option of going 39 inches to 54 inches all the way down to 24 inches right here just to tackle every single area. It’s really cool. And the fact it’s so compact, that’s really awesome that it won’t take a lot of room in your car. You can store it anywhere in your car and it wont be an issue for you at all.

We recently got 10 inches of snow, and I got to put SnoShark to the test to see if it’s truly one of the ultimate snow removal tools on the market today. I was not disappointed. It easily tackled the hard-to-reach roof area. Clearing snow from the roof of your vehicle is something that a lot of drivers forget to do or simply can’t do with traditional snow brushes. Another thing I liked was the ability to easily extend and retract SnoShark to quickly transition between areas of the car. Also important to note, I didn’t get my clothes covered in snow and was able to remove snow between the wipers and the windshield without fuss. Removing snow from the top of my windshield to the front tip of my car with a single stroke was really satisfying. It lowered the overall snow removal time so much that I ended up cleaning two cars in under 5 minutes.

I tried to think of a negative to mention, but when it comes to how the product functions, I couldn’t. The price tag of $54.99 is a bit high, but honestly, I feel like this is a great product to have in your vehicle to tackle snowy days. Click here to learn more about the standard and XL versions of SnoShark and get your own.

Thank you for watching, and don’t forget to hit the subscribe and bell buttons on YouTube to get alerts for our latest content. Let us know what you think of SnoShark, and comment below on what you’d like to see us test out next. I’m Amr, I’ll see you in the next episode. Click here to buy your very own SnoShark.