It is the ultimate Porsche adventure

LEVI, Finland — Utter darkness. It is around 6 p.m. in the Arctic Circle and blowing fat tufts of snow. The LED headlamps on the Porsche Carrera 4S barely pierce the icy path, a steeply pitched logging road. Yet I’m full-blast on the gas, eyes straining, realizing just in time that a closing-radius switchback turn is fast approaching.

Pointing the nose to the outside of the turn, I cram hard on the brake, wrench the steering wheel left and feel the rear wheels break away. The car goes sideways, and now I’m steering while looking out the side window. Get back on the gas and straighten your hands on the wheel, I urge myself, as the Porsche slides through the darkness.

I’m too wide, and the rear three-quarters of the 911 crashes into a soft snowbank. I add more throttle and the all-wheel-drive system scrabbles through the powder, freeing the car, undamaged. I exhale forcefully. I’ve been driving on iced-over forest roads for about seven hours today, and my dopamine receptors need a break. 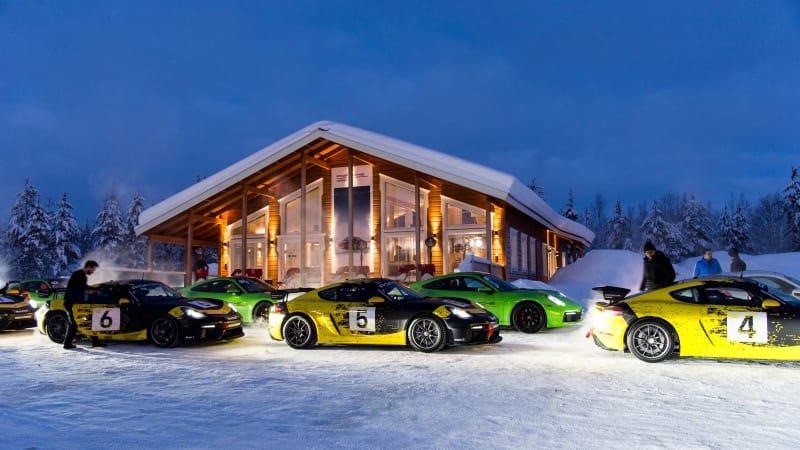 The school that rules

Every manufacturer seems to offer an ice-driving experience these days. The majority take place on frozen lakes or flat expanses in the mountains. We’ve taken part in a number of them over the years, including Porsche’s Camp4 in Canada, and they’re generally both a good time and an excellent way to hone car control.

But the Porsche Ice Experience near Levi, Finland, is the ice experience to rule them all. It may in fact be the ultimate example of any of the global Porsche customer experiences on offer, eclipsing even a three-day race school in 911 Cup cars I attended at Barber Motorsports in Alabama.

The top-tier Ice Force Pro program gives participants a full three days of driving, starting each day in the Arctic darkness around 9 a.m. and ending after 6 p.m., some three hours after the sun has fallen below the horizon. Daytime may be scant, but drive time is not. None of the drivers in our five-person run group is sharing a car, and we get more than 20 hours of actual seat time. Imagine doing that on an tarmac racetrack.

The 7,290 euro price (~$8,000) includes everything except travel. Having a car to yourself is an additional 5,500 euro (~$6,050). Worth it, in my estimation — if you’re flying all the way to very remote Finland, the extra hours of drive time lead to a superior level of muscle memory. 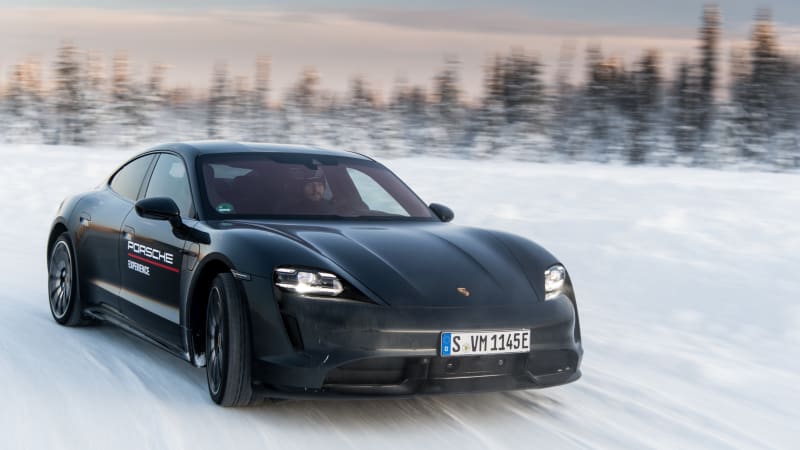 Which brings us to the cars. The new-generation AWD 911 4S is the mainstay, fitted with Nokian Hakkapeliitta 8 tires and 4-mm studs. We also get a four-hour stint in naturally aspirated, rear-wheel-drive 911 GT3s, again with 4-mm studs.

More novel is a chance to send the brand new, all-electric Taycan spinning around the ice, an electric whine in your ears and crazy amounts of torque looking for grip. (The Taycans get only 1.5-mm studs, requiring more gentle applications of throttle.)

Most incredible of all is the time spent with the 718 Cayman GT4 Clubsport, a genuine race car. Its toothy 5-mm studs translate to great grip and the ability to drive it like a hybrid of traditional racing lines and rally-style flicks. The cars have full race cages and five-point harnesses. It’s the only car in which a helmet is required, as is a HANS device. 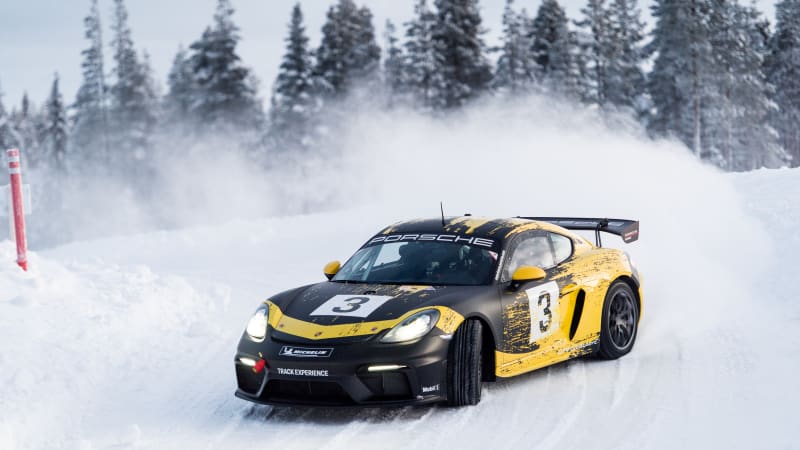 Far more than a frozen lake

Lest you think that all the driving is done on flat, featureless, frozen lakes, imagine a massive drifting campus transported to the Planet Hoth, and you’re getting there.

It’s hard to even describe the size of the damn place. There are 76 acres spread across a pristine, snow-skimmed forest. Secreted within that landscape are 41 separate driving courses, each plated with carefully cultivated ice. Many of these are rally-style stages, some miles long. The forest roads are narrow, wending through the trees and over hills and crests, demanding that you navigate through off-camber twists and fast straights.

It’s an adrenalized way to focus on driving skills and negotiate the different drive systems among cars. Mistakes send you into (thankfully soft) snow walls. Get it really wrong and a Cayman is always on hand to tow you out, after having to awkwardly announce your mistake to the rest of your driving group via radio. (“Spin-spin-spin!”) 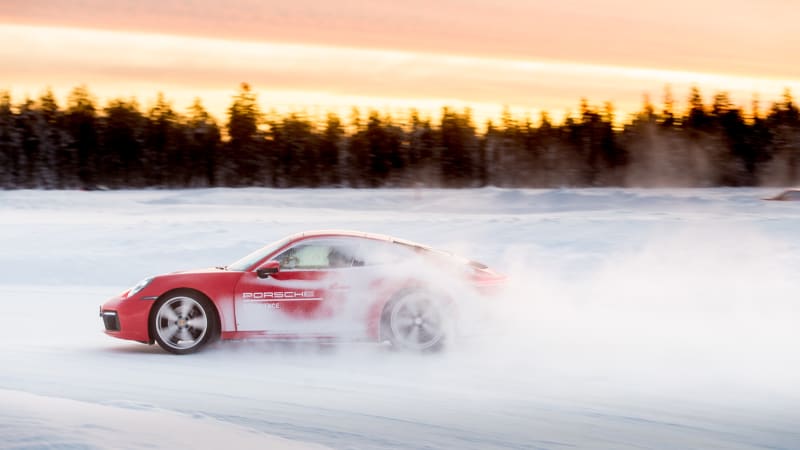 Piloting the 4S may be best described as an intellectual exercise. You want to get around U-shaped corners in a manner that puts the nose pointing toward the exit. That means getting the car turned early by inducing significant sideways action. Pitch the car hard, under braking, and then open your hands to neutral and get back on the throttle.

Those last two points are utterly counterintuitive, and can mean your brain is often arguing with your primal instincts (which are telling you to counter-steer, stop the slide, and get off the gas). Once you get it right consistently, you can pretty much keep the 4S sideways for as long as you like by working the throttle.

The GT3, conversely, is utterly intuitive to anyone with sufficient rear-wheel-drive experience. It only takes a quick twist of wheel and a sharp shot of throttle to get the car sideways. The side-to-side weight loads and unloads beautifully, leading to dramatic and incredibly fun pendulum turns. My active brain shut off, allowing for quick hands and relaxed shoulders. The steering is tactile, the brakes ideal, the weight perfect. Heaven is something like the GT3 on ice in a beautiful forest, me thinks.

My time in the Taycan is short, and somewhat frustrating. It’s a far heavier car than, say, the Cayman Clubsport, and Porsche purposely put smaller studs on the tires to reduce grip. Otherwise, the instructors said, it is just too fast on the ice. It goes sideways easily, and one gets the sense of the low center of gravity —the batteries sit below the floorboards — and of the vast and instant reservoirs of torque. It’s a monster on tarmac, but not ideal on ice.

Which brings me to the 718 Cayman GT4, probably the best example of this most maximum of Porsche experiences. The sun has only recently risen, and we are piloting our race cars on a medium-length, very-tight track. The snowbanks are tall, and the straights long enough to get a heady amount of speed.

I don’t think I’ve driven anything so directed and delightful on slippery surfaces. The car blurs down a straight, shedding snow under its tires. But with the longer spikes, you can wait until the last moment to brake, the pedal underneath your foot solid and stiff.

Then you twist the wheel in a sudden way that you’d never attempt at this speed on asphalt, and the world blurs into white as the deftly balanced mid-engine machine pivots, sluices through a corner completely sideways, leaving the nose pointing down the next straight. Power on.

The noise is racecar rattle and stressed six-cylinder boxer behind my head, and the sound of tires scraping on ice. It is the sound of crazy freedom in a faraway place. Of the chance to do really crazy things in high-dollar Porsches. Of the ice experience that’s a snowpile above the rest. 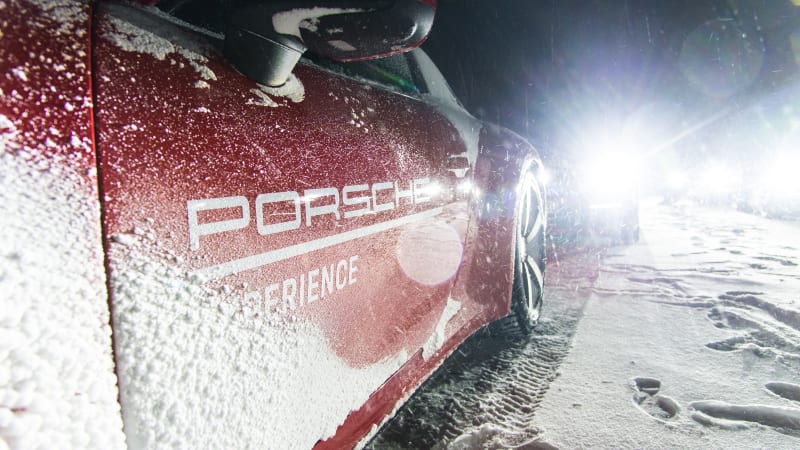