It was deemed non-street legal. Wonder if it was the machine guns on the hood?

Not so fast, Caped Crusader. Traffic police in Moscow towed a replica Batmobile made to look like the version driven in “Batman v Superman” and “Suicide Squad” after determining it didn’t jibe with road safety regulations and was “not manufactured within factory conditions.”

Video shows a tow truck hauling away the faux and plastic-wrapped Batmobile. According to Russian state news service RT, police initially noticed the car — and really, it’s easy to see why — parked on a major street in the central city sans license plate. The driver wasn’t around, but officers reportedly had to call a special towing service to accommodate the 13-foot-plus-wide vehicle. They thoughtfully applied the plastic to avoid scratching it. 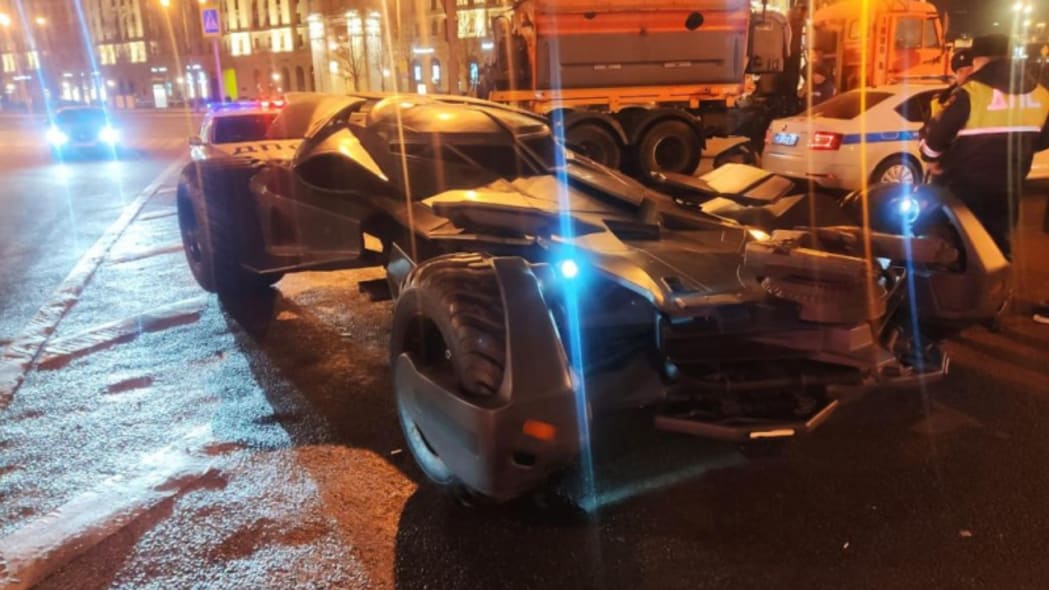 In a statement from Moscow’s branch of the Ministry of the Interior, police said the 32-year-old Moscow resident built the car in a private workshop but never registered it or obtained a “certificate of approval” for the vehicle type, and doesn’t have clearance to operate it on public roads. “Traffic police officers using special technical measuring instruments measured the dimensions of the ‘car,’ which showed the excess of permissible norms,” the translated statement reads.

The driver received three citations, and will have to shell out the equivalent of around $780 to the towing company, plus around $35 per day in the impound lot.

We've seen a lot of entertaining Batmobile replicas over the years, but this one is something else. The car reportedly was imported to Russia from the U.S. in 2018, where electronics and other features were added to it, and recently sold on a Russian car-trading site. It has massive lugged tires, with the rear ones wider than the front ones, rear-opening lotus-petal doors revealing a two-seat cockpit, huge rear wings and what we assume are faux machine guns on the bonnet. You can see more in the video below, which is in Russian.

Whoever built this should probably get a job designing military vehicles, just sayin.