It's cheaper than a Prius, and looks better, too

The 2020 Toyota Corolla Hybrid marks the first time we’ve seen a hybrid powertrain in a Corolla in the U.S. It uses the same hardware as the Prius, consisting of a 1.8-liter four-cylinder and single electric motor that combine for 121 horsepower. So no, the power numbers aren’t scintillating, but the EPA fuel economy figures are. The Corolla Hybrid is rated at 53 mpg city, 52 mpg highway and 52 mpg combined. Those numbers put it right on pace with the 52 mpg combined rating of the Prius LE (though the Prius Eco achieves 56 mpg combined). Its price is significantly less than the Prius LE, though — at just $24,055, it’s $2,435 less. Impressive stuff, but the Prius is more practical with its hatchback body. You can also get the stripper Prius L Eco for just $25,280, closing the gap by a bit.

Toyota positioned the Corolla Hybrid like this on purpose, letting it be the budget option for Toyota’s small, hybrid lineup — the Prius C hatchback is no longer with us. Our tester was the LE trim, because that’s the only trim Toyota offers on the Corolla Hybrid. After a couple of accessories were tacked on (body side molding, mudguards and a carpet mat package), our tester came to $24,467. A few of the standard features are impressive at its low price point. You get LED headlights, an eight-inch touchscreen with Apple CarPlay compatibility and Toyota’s full Safety Sense suite of driver assistance aids that includes adaptive cruise control and lane-centering.

If you were looking for the cheapest Corolla, this isn’t it. A base Corolla L sedan starts at $20,555, and the Corolla Hatchback SE goes up from $21,245. According to the EPA, you’ll save about $400 annually by opting for the Hybrid over the traditional combustion engine Corollas, given a typical 15,000-mile yearly cycle. Those savings are respectable, but it’s important to have some perspective when spending extra cash on the greener choice.

News Editor Joel Stocksdale: I've got mixed feelings about the Corolla Hybrid. On the one hand, it's an impressively good car to drive with remarkable fuel economy. Its 52 mpg combined rating matches that of most Prius trims. It has a smooth, comfortable ride while also handling corners nicely with mild body roll. The steering is even fairly communicative.

But the Corolla Hybrid is only available in one trim level, LE, which is the second lowest in the Corolla line. And it definitely shows inside. Nearly every surface is hard black plastic. The cloth on the seats and the headliner look and feel cheap. The dashboard design itself isn't particularly interesting, either. It's far from what a $24,000 car should feel like.

With that being said, it is the best version of the LE Corolla. An equivalent gas-only Corolla LE comes in at $23,000, but only gets 33 mpg. The 1.8-liter gas-powered Corolla does have about 20 more horsepower and pound-feet of torque, but with just 139 horses, it still isn't fast. The Corolla Hybrid is also a way to effectively get a Prius for about $1,000 less, but the Prius is more spacious inside with a more interesting interior and a bit more versatility thanks to its hatchback. That base Prius Eco also returns 56 mpg, but at such a high number, that's a very small advantage. So I suppose the Corolla Hybrid could make sense for a number of people, but some higher trim options would be welcome. 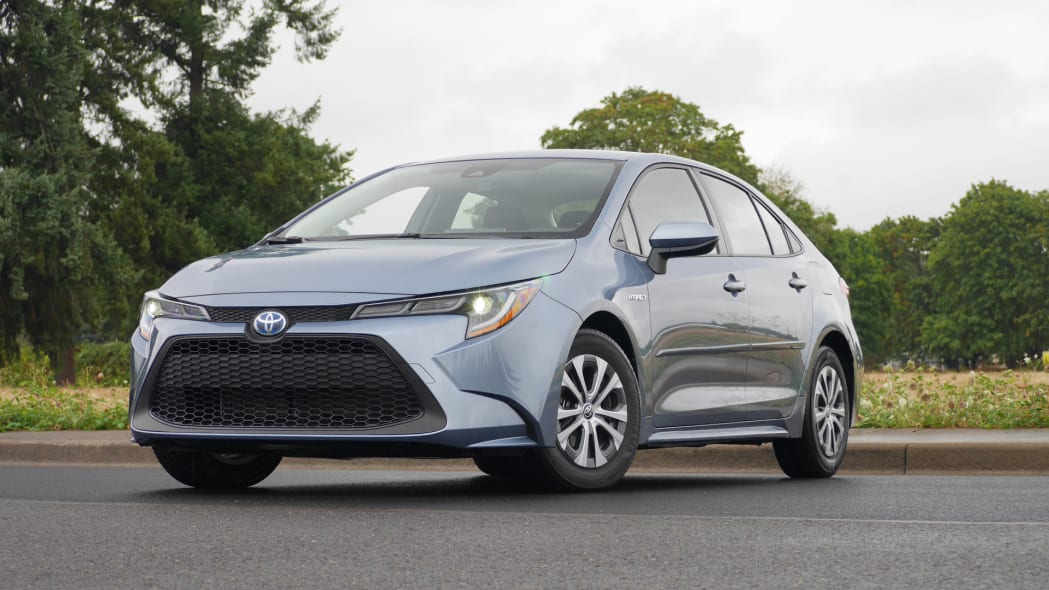 Road Test Editor Zac Palmer: I’m right there with Joel when it comes to my mixed feelings about the Corolla Hybrid. On the one hand, this model's existence gives you the opportunity to ignore the Prius. Maximum fuel economy in a Toyota has always meant wearing the Prius badge proudly. Along with that green badge comes the stigma of driving a Prius and the current model’s impossible-to-love design. Despite the new Prius driving remarkably better than the previous-gen car, I have detested the way it looks from day one. Sales for the Prius have been in free-fall, too, as the RAV4 Hybrid gobbles up fuel-conscious buyers.

If looks were the only thing keeping you from buying a Prius, this Corolla cures that issue. The 15-inch wheels and dorky hubcaps don’t excite, but the new Corolla’s design is much sportier and pleasing than the Prius. I dig the large, mesh grille up front, and the thin headlights are attractive LED units. There’s purposeful sculpting and muscular lines arcing through the front bumper and hood. Nothing special is going on down the sides except for the big “Hybrid” badging on the front fender. The same badge is situated out back, but that’s it for the Corolla Hybrid’s green cred. It looks like a regular Corolla, and the newly-redesigned compact Toyota looks pretty darn good. Unless weird and ornery were what you were aiming for, I’d give the nod to the Corolla Hybrid over a Prius here.

But again, Toyota hamstrung this car by offering it only in the basic LE trim level. If you have any designs on upmarket luxury and tech features, the Prius is the only option. There’s an XLE and Limited (and all-wheel drive) trim of the Prius available, and both of those are equipped in richer accoutrements than the Corolla Hybrid. If nicer materials and gizmos aren’t your speed, then I’d suggest a Corolla Hybrid every day of the week. Looking for more than the basic slate of standard features? Look elsewhere.

That “elsewhere” should absolutely be the Honda Insight, too. The base Honda is only $170 more expensive than the Corolla Hybrid, has nearly identical fuel economy figures and more power to boot. And while the Corolla is an improved driver in this new model year, the Insight handles better and is a smidge more fun to drive — retain some perspective on the word “fun” for these 50-plus-mpg hybrids, though. Plus, if you wanted the extra tech and better materials the Prius has, Honda offers multiple trims of the Insight to choose from.

My last quibble with the Corolla Hybrid is with the annoyingly sensitive and often inaccurate lane-keeping system. Any minute break in lane markings causes an irritable beep to be sounded in the cabin. There’s an unavoidable set of railroad tracks near my house that would cause this alert to be sounded every time no matter how perfectly centered I was in the lane — other cars don’t do this. The beep went off on many other random occasions throughout my weekend while I was centered in the lane. My annoyances with the system were only compounded by its seemingly inaccurate lane corrections from time to time, shoving me closer to the edge of the road and out of the center of the lane. If I were living with this system on a daily basis, it would’ve been turned off within the first 100 miles and never turned back on. 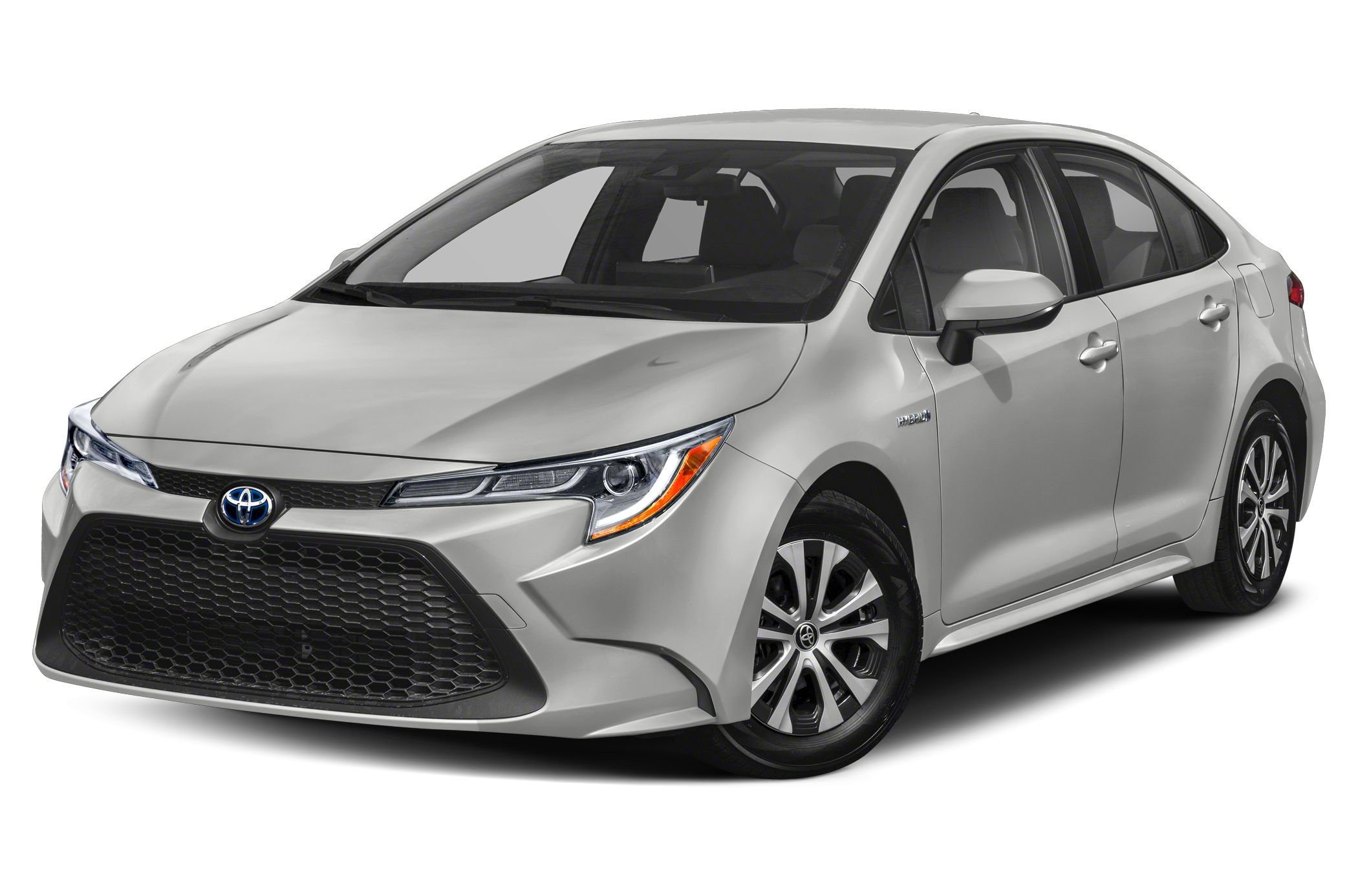 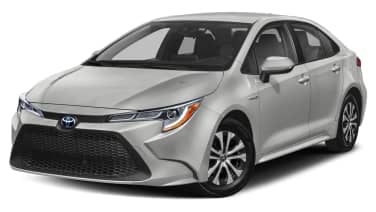