Rocketing along with 2,700 horsepower shouldn't feel this serene

Fleeing across Biscayne Bay in a speedboat at 72 miles per hour, with a view of the Miami skyline receding behind us, should not be such a serene experience. It should at least be… splashy, or deafening. But in the latest, 12th annual, $3.3 million collaboration between the famed Teutonic speed demons at Mercedes-AMG and the similarly famed South Florida speed demons at Cigarette Racing, all one senses from the padded, cozy, triple-wide chaise lounge up front is a potent rush of acceleration.

Perhaps it’s because the six supercharged, 450-horsepower Mercury Marine 4.6-liter V8s are so far away from our eardrums, their choir of propellered tumult being at the aft end of nearly 60 feet of engineered ash-wood-look decking and PVC-cored, vacuum-infused composite laminate. But the sensation of acceleration is akin to the rush of an electric supercar taking off from a standstill. It feels instantaneous, unbridled, and omnipotent, with endless reserves.

“2,700 horsepower will do that,” says Captain Bud, as he pushes the throttle forward, staring into what appears to be a large-scale iteration of Mercedes’ own giant, twin, touch-screen LCD user interface. (What does Bud see in those nautical screens? Perhaps his own Moby Dick-like white Manatee? Towards thee I roll, thou all-destroying but unconquering sea cow; to the last I grapple with thee; from hell's heart I stab at thee; for hate's sake I spit my last breath at thee.) 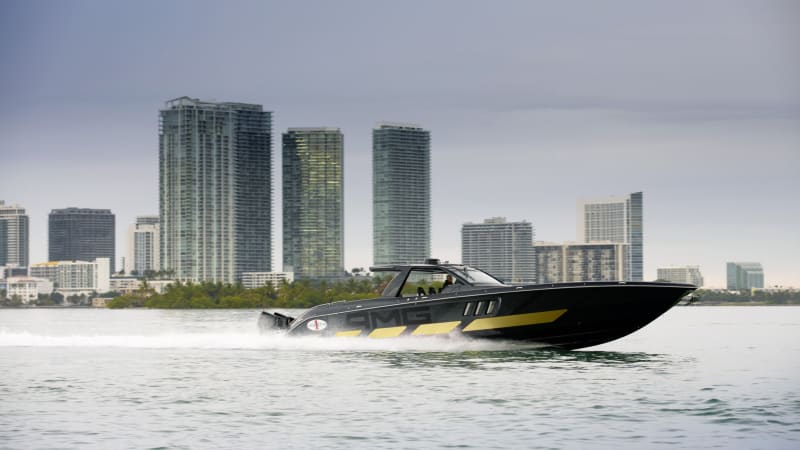 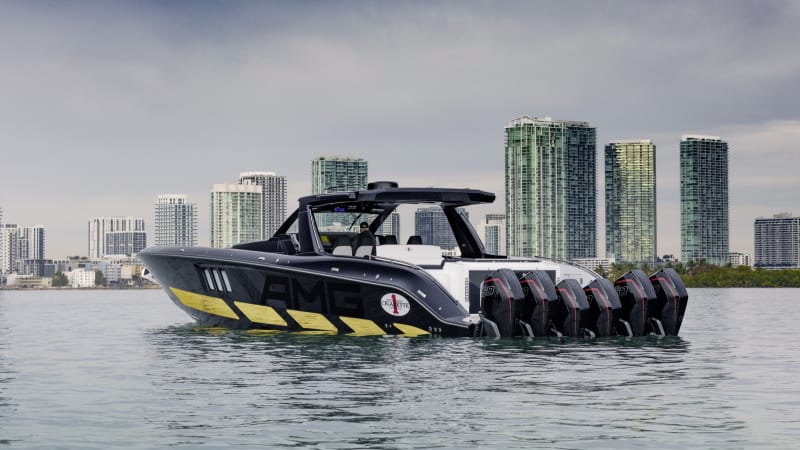 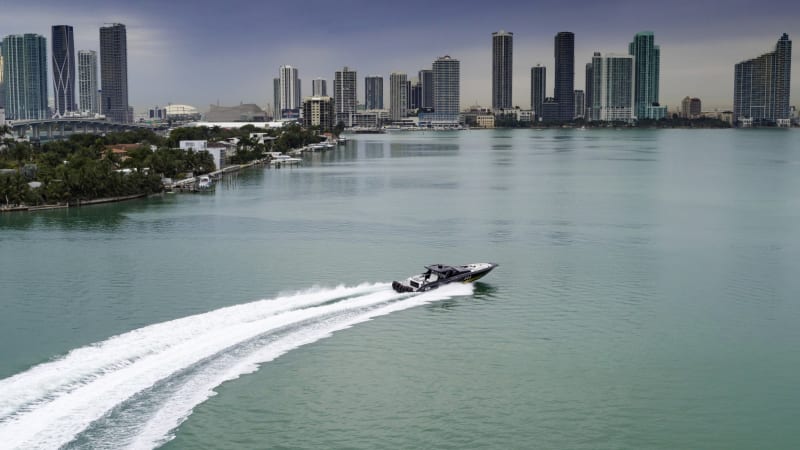 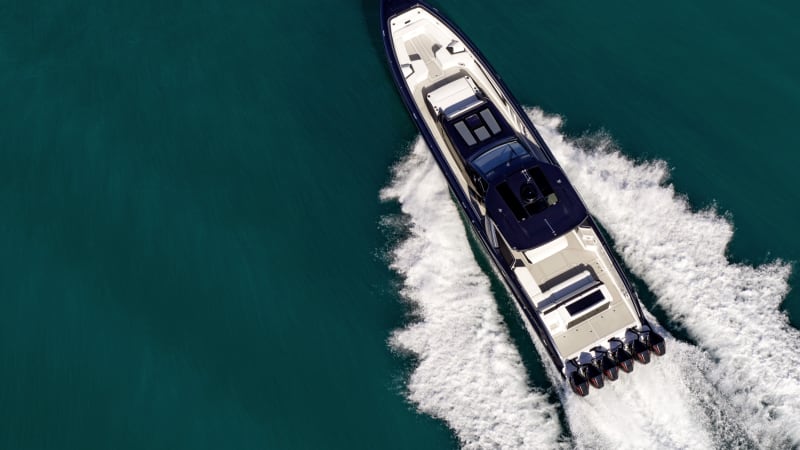 A wet weight of 40,000 pounds, including more than 6,000 pounds of gas in its 1,000-gallon fuel tank, helps make it even more imperturbable. The skies may darken with the imminent afternoon rains, the sea squalls may force pelicans off their dive-bombing trajectories, the Atlantic may churn in its inexorably rising swirl toward the streets of South Beach, but Cigarette’s Tirranna AMG Edition plows through the water as if tethered to a team of Poseidon’s dolphins. (We did spot some dolphins tossing and clicking nearby, but no sign of the bearded guy with his trident. Maybe he was helping out with a Maserati boat somewhere?)

The Cigarette also comes to a stop with remarkable alacrity, once the engines are shut down. So quickly, in fact, that we asked Bud if there was some kind of speed-scrubbing reverse thruster. “That’s just friction,” he said.

Even when we weren’t ripping across the ocean at improbable speeds, the Tirranna provided amazement and amusement for us, and a couple dozen other folks on board. (It can seat 26 in its banquettes, settees, and twin captain’s chairs.) We played with the actuators for the hydraulics that power picnic tables up out of the floor, or recline the seatbacks out back into a lie-flat bed. We toyed with the electrically-actuated shade that extends back as a sun-screen from the carbon fiber bridge canopy. We examined the “summer kitchen” in the rear, which included a grill, a sink, a chopping and fish de-scaling area, and lots of neat locked storage bins. 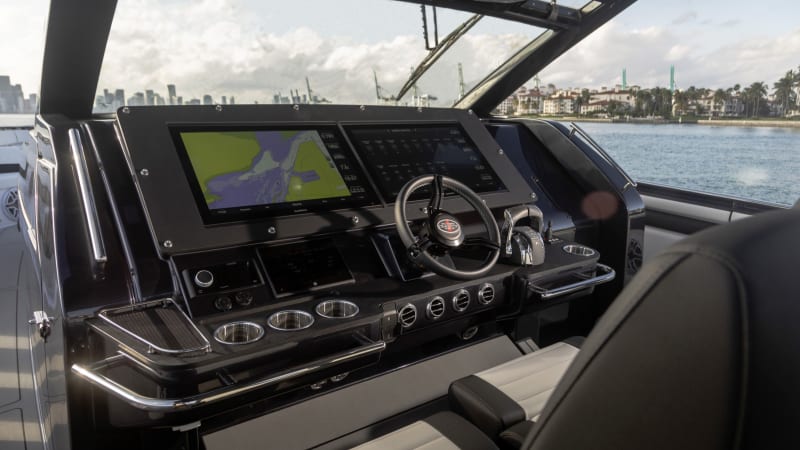 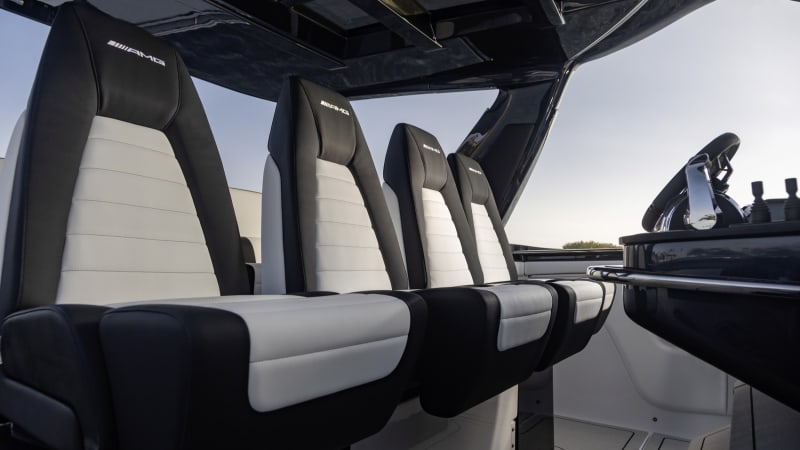 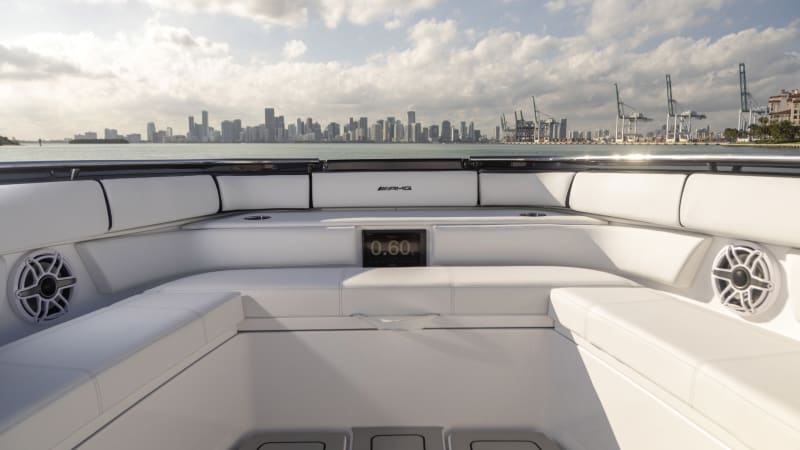 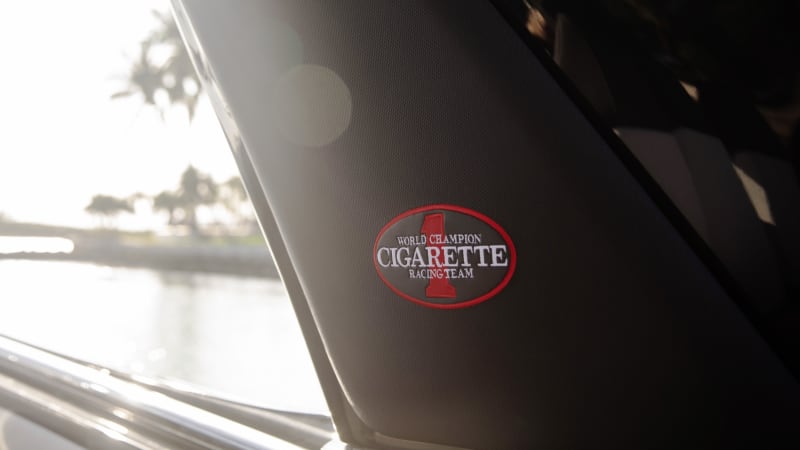 And that was before we discovered the cabin, which is reached via a narrow staircase in front of the bridge, and includes a California King-size bed wrapped in beige and blue leather, a television, couches wrapped in more of the same hides, two giant skylights in the ceiling and six gun-slit windows in the sides, and, most interestingly, a combination toilet/shower stall which, we suppose, somehow saves water by obviating the need for a bidet.

We would be remiss if we did not mention that these interior materials, as well as the checked black-and-gold livery on the outside, were inspired by the $150,000 577-hp Mercedes-AMG G63 SUV, with which this boat shares some essential equities. To drive the point home, Mercedes even produced a one-off G with the same paint job and interior materials, and Cigarette-embroidered floormats.

“This combination of two icons is unique,” says Gorden Wagener, Benz’s global design head. “We both, Cigarette and Mercedes-AMG, share the same passion for excellence and performance, and both are benchmark within the industry. And they are the ultimate driving pleasure, on the land and the sea. The G-Class is perfect on every ground, even on the way to the road. And Skip’s boats [Skip Braver, owner of Cigarette] are the AMGs of the sea, just a perfect ride.”

We generally feel like a captive whenever we board someone’s boat. But, we have to say that we agree with Wagener. Though we did feel like two more motors could have easily fit in the back, and the seats up front could have been massaging and cooled. There’s always next year.