We test it back-to-back with a Mercedes GLC SUV 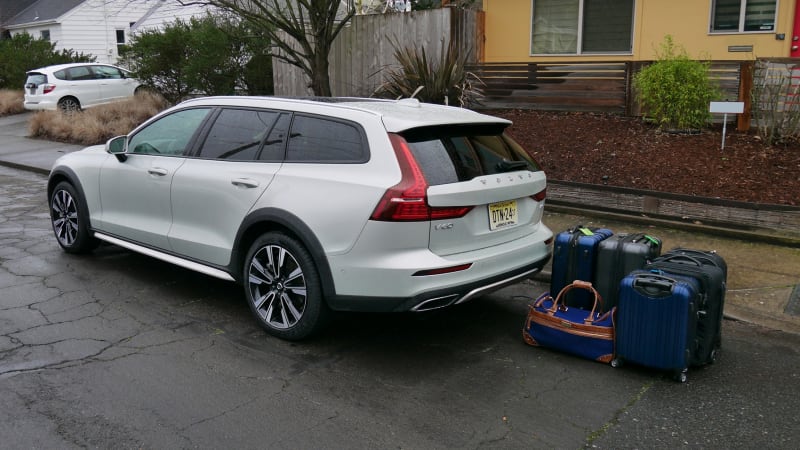 As scheduling would have it, the 2020 Volvo V60 Cross Country ended up overlapping for a day with the 2020 Mercedes-Benz GLC 300 that was previously featured here on Luggage Test Friday. It provided a perfect opportunity to test a common perception among wagonists like myself and many other car reviewers, that a wagon is more practical than all those compact crossovers that are vastly more popular. Admittedly, the GLC is one of the smaller compact SUVs, but nevertheless, I could easily see someone choosing between these similarly priced luxury vehicles. I know I'd certainly cross-shop them.

Now, the 2020 V60 is significantly larger than the almost hatchback-like model it replaces, adding 4 inches of wheelbase and 6 inches of overall length. According to the specs, it has 23.2 cubic-feet of space behind its raised back seat. We already know the GLC's capacity figure is misleading at 19.4 cu-ft, but the V60's is nevertheless greater. To put it outside of this specific comparison, 23.2 cubic-feet would be bigger than most subcompact models like the the BMW X1 and Volvo XC40, but smaller than Volvo's XC60 and many other compact SUVs. 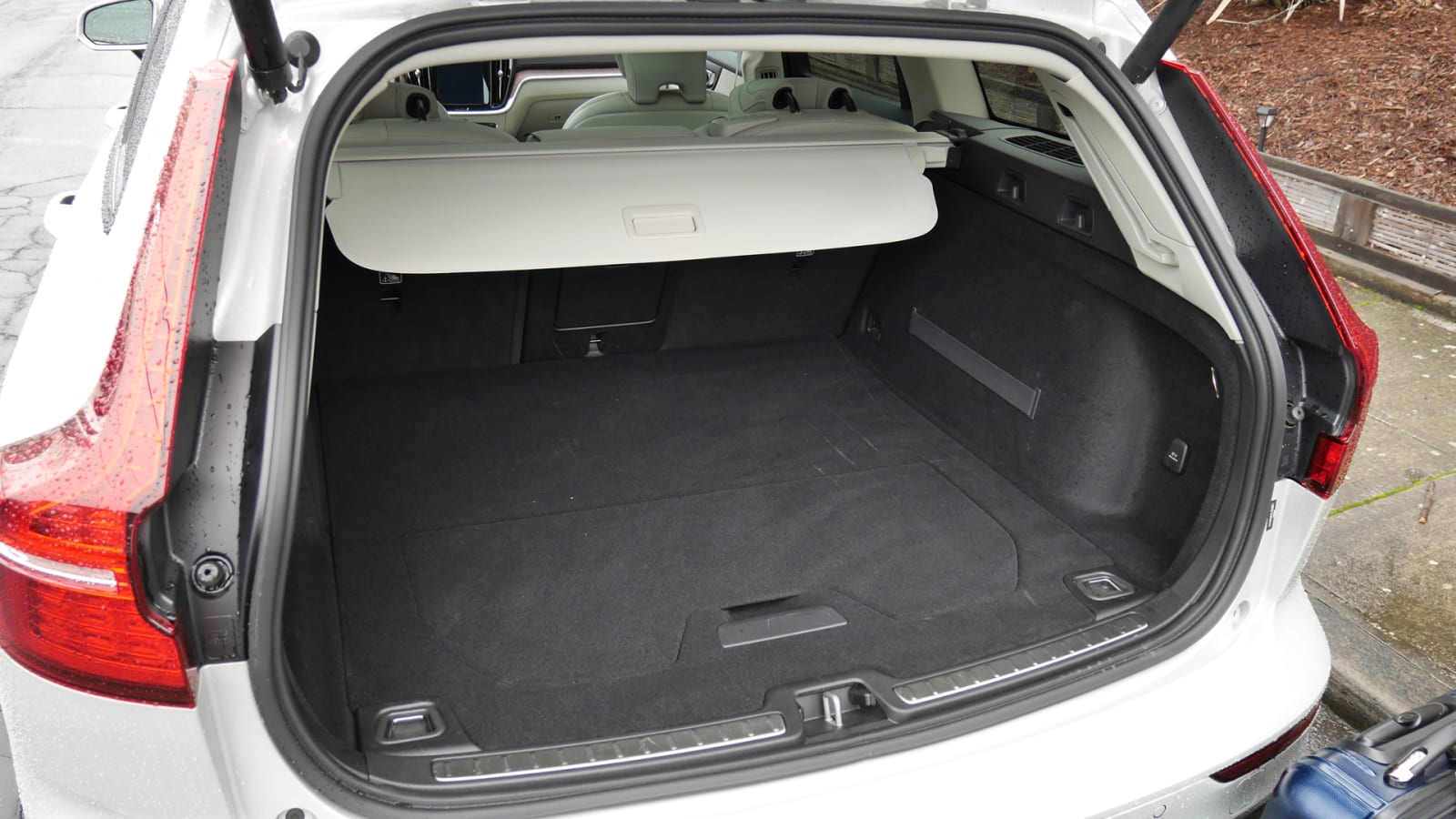 Here is the space you get. Already you can see that its long, boxier roof should make for a more usable space than the chopped rooflines of many crossovers. 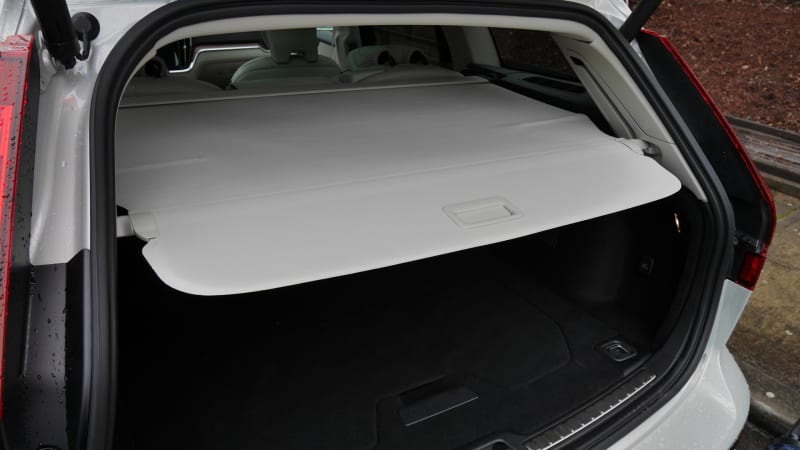 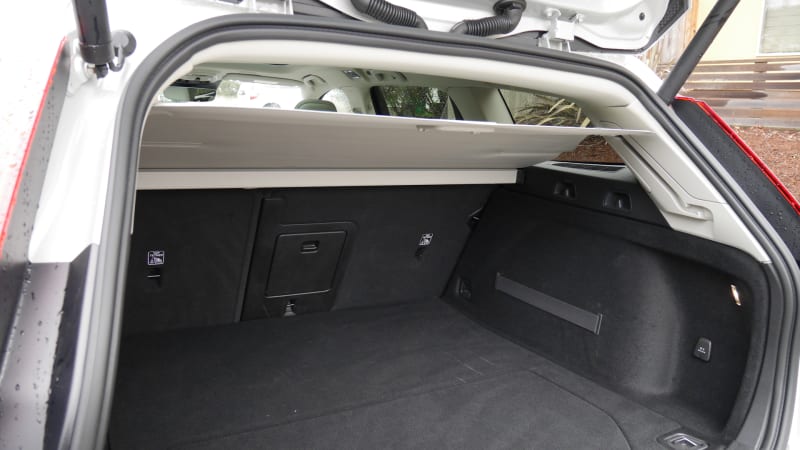 The V60's cargo cover can slide up the D pillar for quick access, much like it does in many vehicles, including last week's Subaru Outback.

You also may note that unusual outline on the trunk floor ... 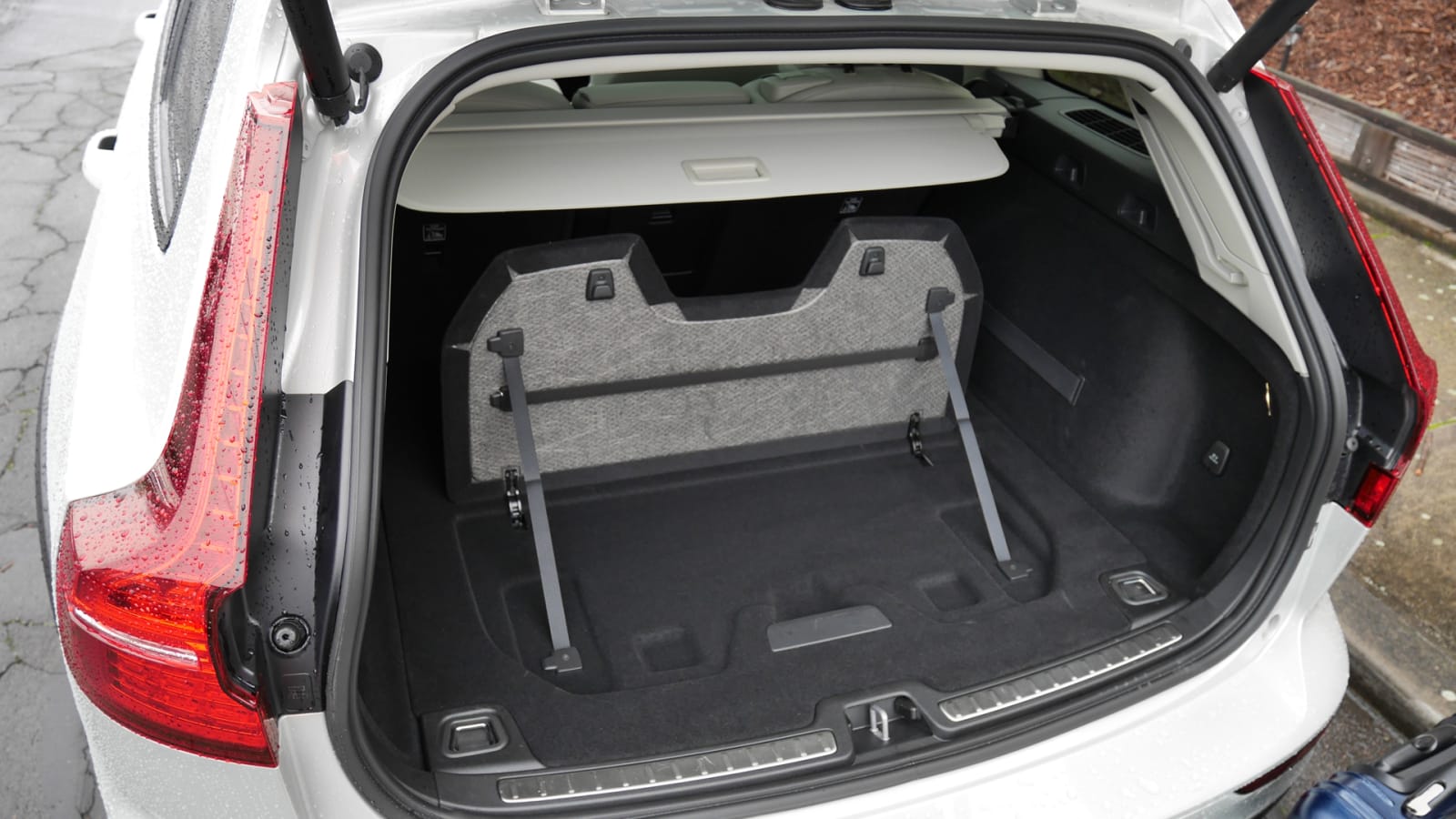 It's a clever pop-up cargo partition for keeping grocery bags or other items from flying all over the cargo area. It's found in other Volvo wagons and SUVs as well.

Now, let's get to the luggage. As always I'll start with the cargo cover in place, and also as always I use two midsize roller suitcases that would need to be checked in at the airport (26 inches long, 16 wide, 11 deep), two roll-aboard suitcases that just barely fit in the overhead (24L x 15W x 10D), and one smaller roll-aboard that fits easily (23L x 15W x 10D). I also include my wife's fancy overnight bag just to spruce things up a bit (21L x 12W x 12D). 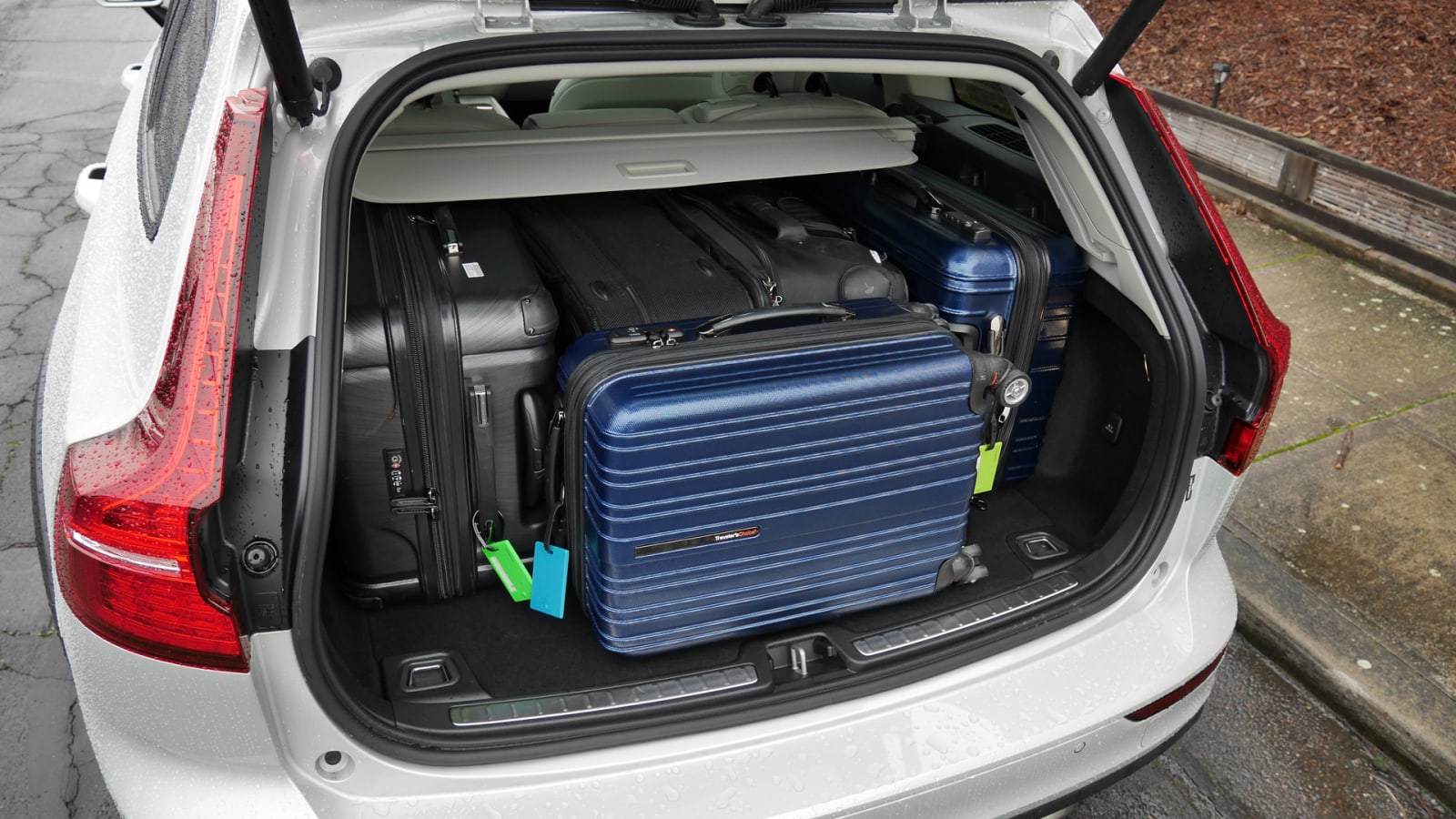 So, like the GLC, everything did not fit. At least the V60 only left the smallest, fancy bag out whereas the GLC left one of the medium-sized bags behind. That's victory No. 1 for the wagon. 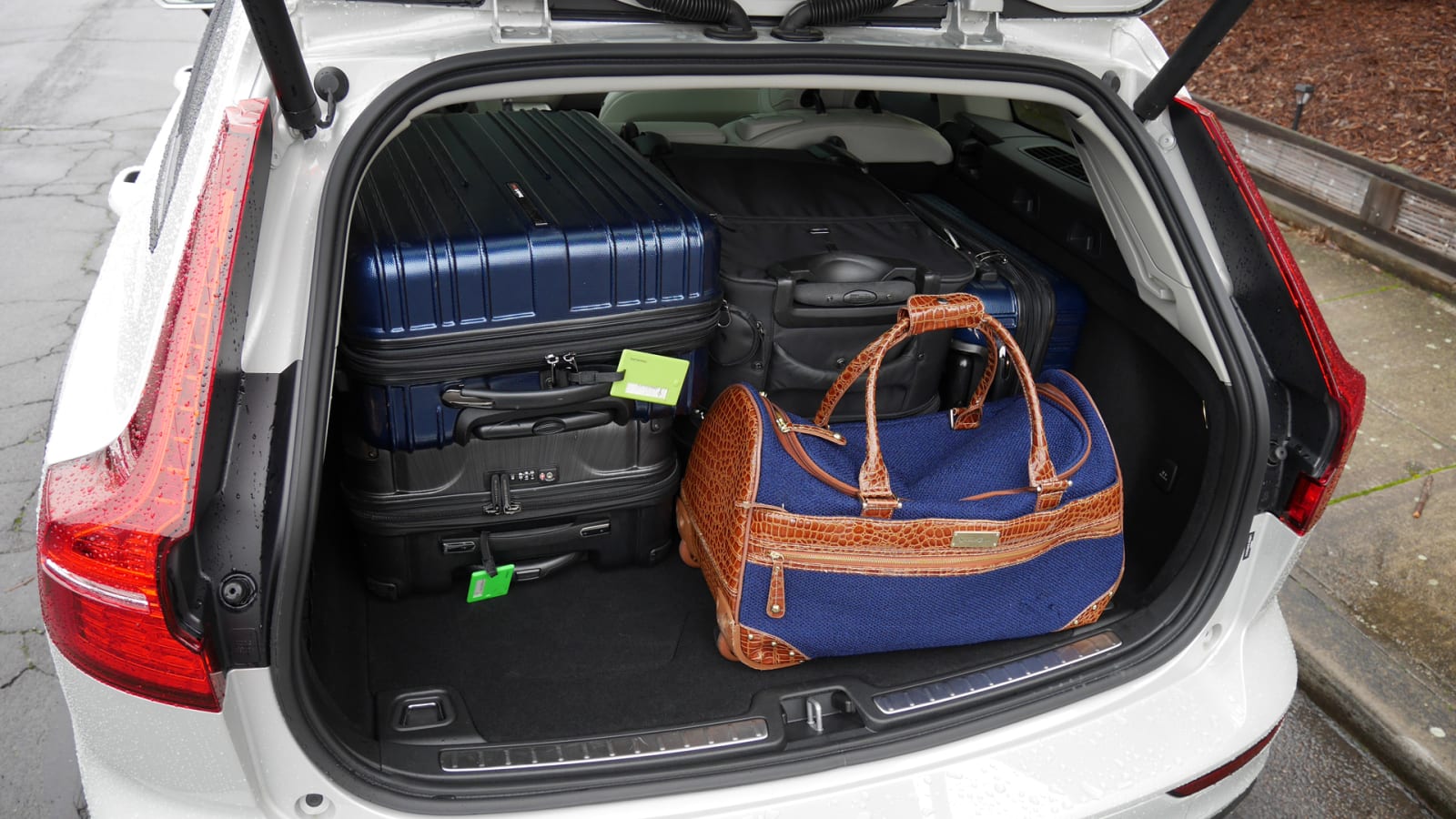 OK, here we go, everything fit with room to spare. I could even fit a pair of extra bonus bags while still maintaining rear visibility. 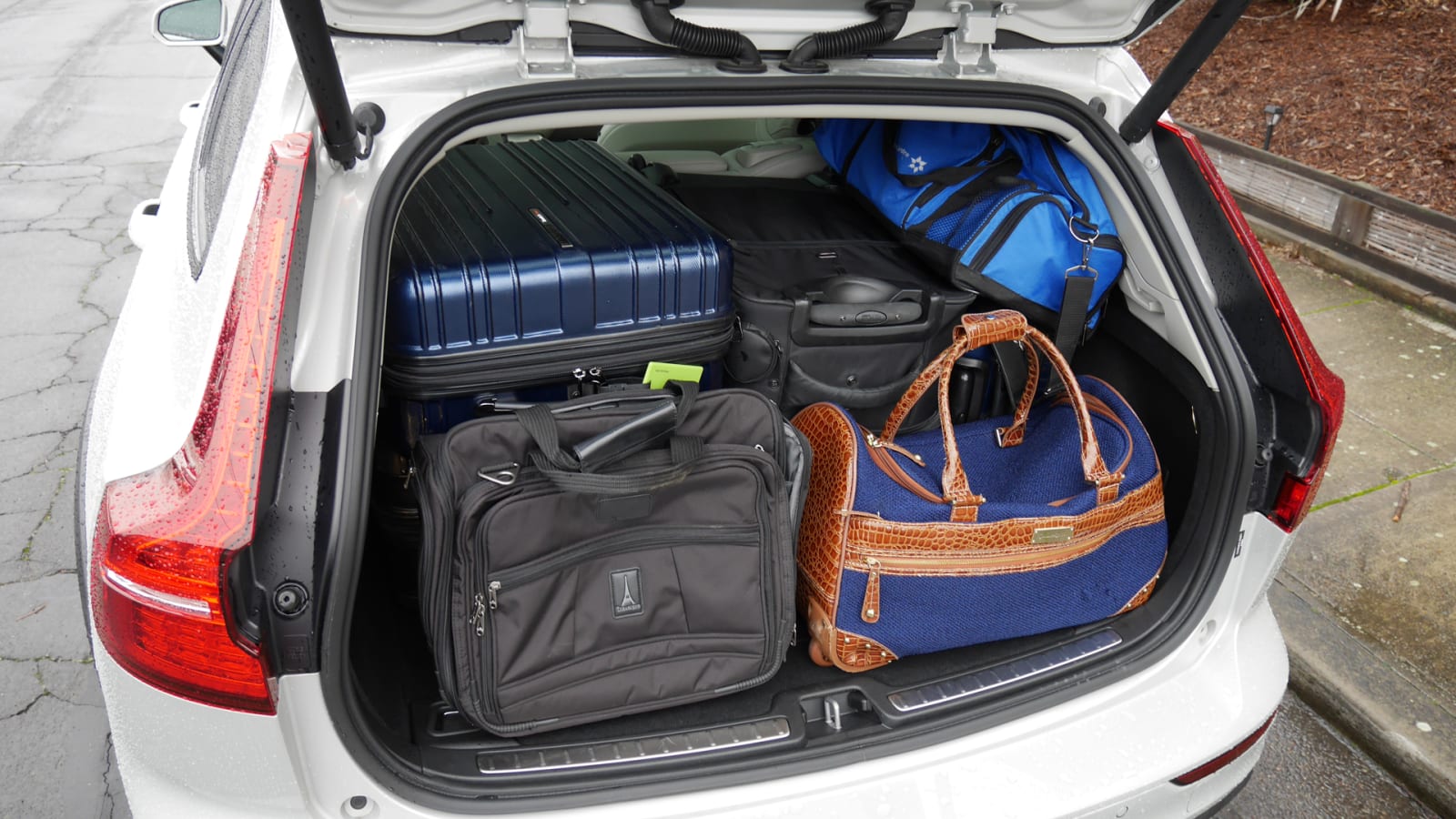 The GLC, by contrast, could've fit that little black bag up there, but it wouldn't have been deep enough to swallow both the fancy bag and that blue duffel. Here's the GLC for comparison. 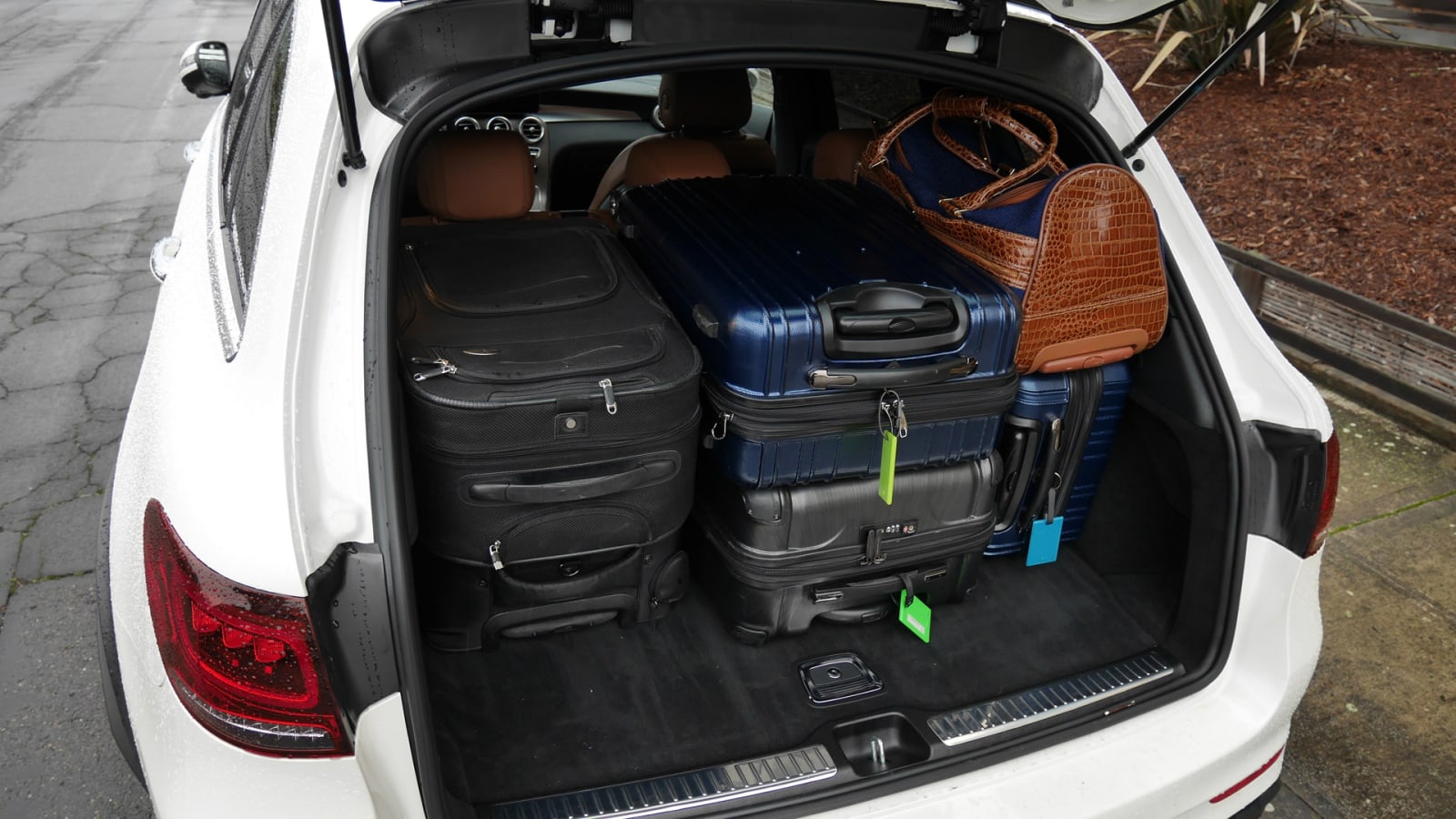 So it is, wagon victory No. 2. The V60 Cross Country can indeed hold a bit more than a compact SUV, even if the SUV in question is one of the smaller examples. (I haven't done this test with many other compact SUVs, but the Mazda CX-5 is pretty close to it.)

Now, how does it compare to other wagons? Well, the most popular one, the Outback, absolutely obliterates it. That's no surprise, as it's much larger.

However, what if you currently own a 2013 Audi Allroad and are wondering how the V60 Cross Country might compare? Funny you should ask, I just happened to have a 2013 Allroad handy. What are the odds?! 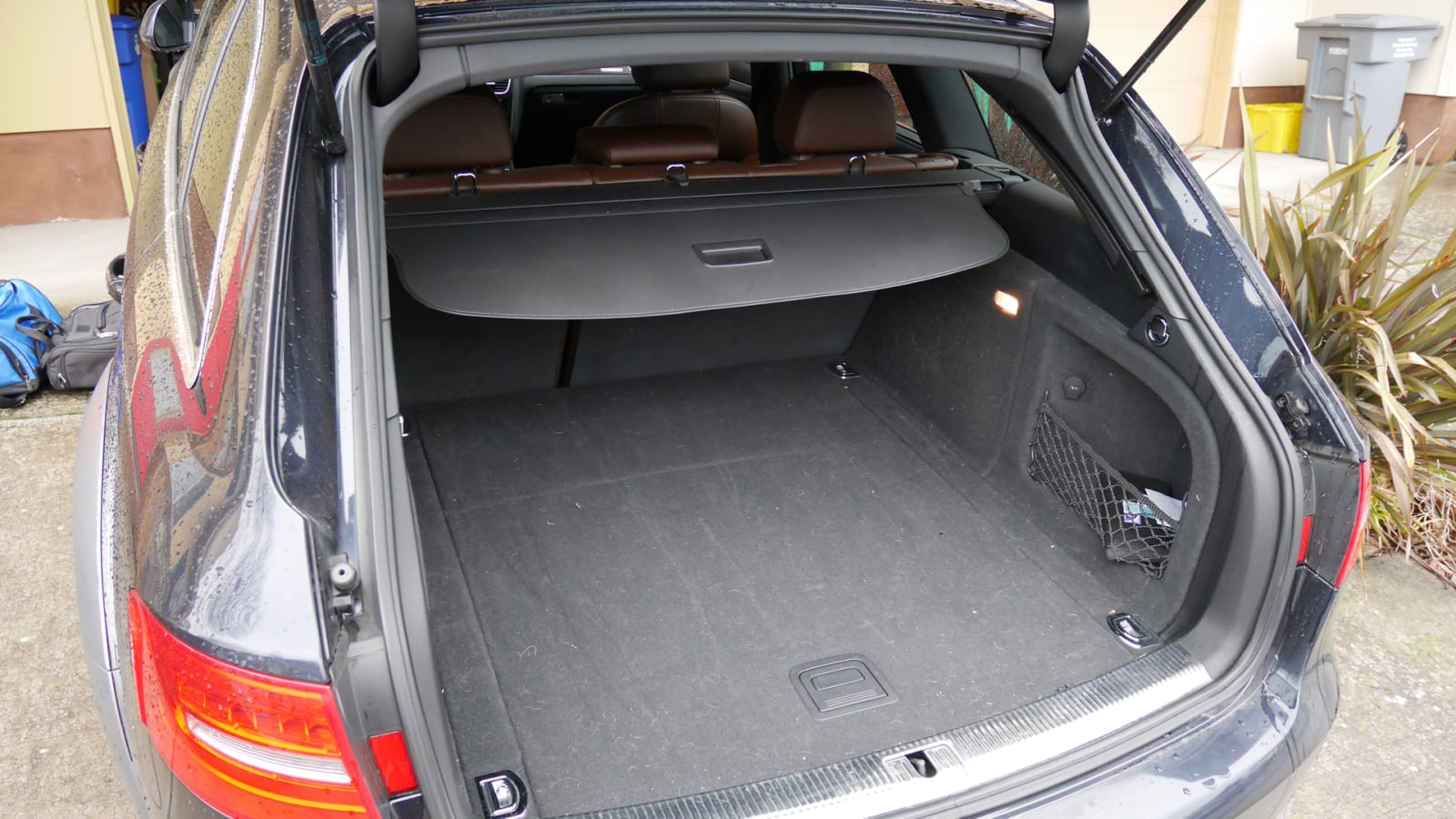 The specs say the 2013 Allroad (aka the A4 Avant before then) has 27.6 cubic-feet of space behind the back seat, which means it should be considerably bigger than the V60. It most definitely is not. I'm not sure if Audi's measurement system was inflating its capacity or Volvo's isn't giving the V60 enough credit, but either way, someone's numbers are deceptive. 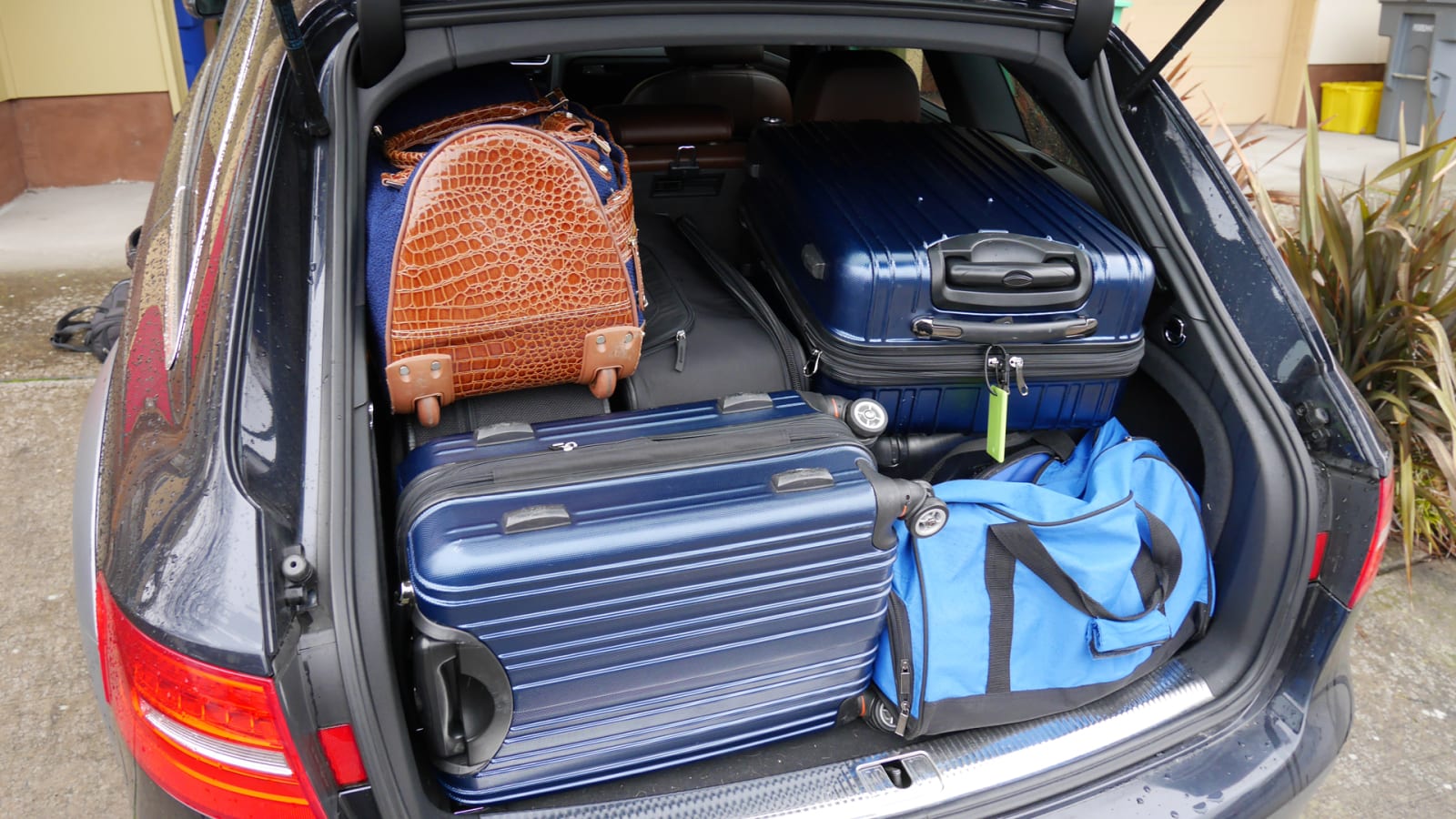 The little black bag doesn't fit in the Allroad and it's MUCH harder to get everything in. Unlike in the V60, the liftgate barely closed.

Should you be wondering about the current Allroad, the numbers say it got smaller for its new generation, so take from that what you will given the above finding.

Now, let's pivot to cargo features. See this little plug up here in the V60? 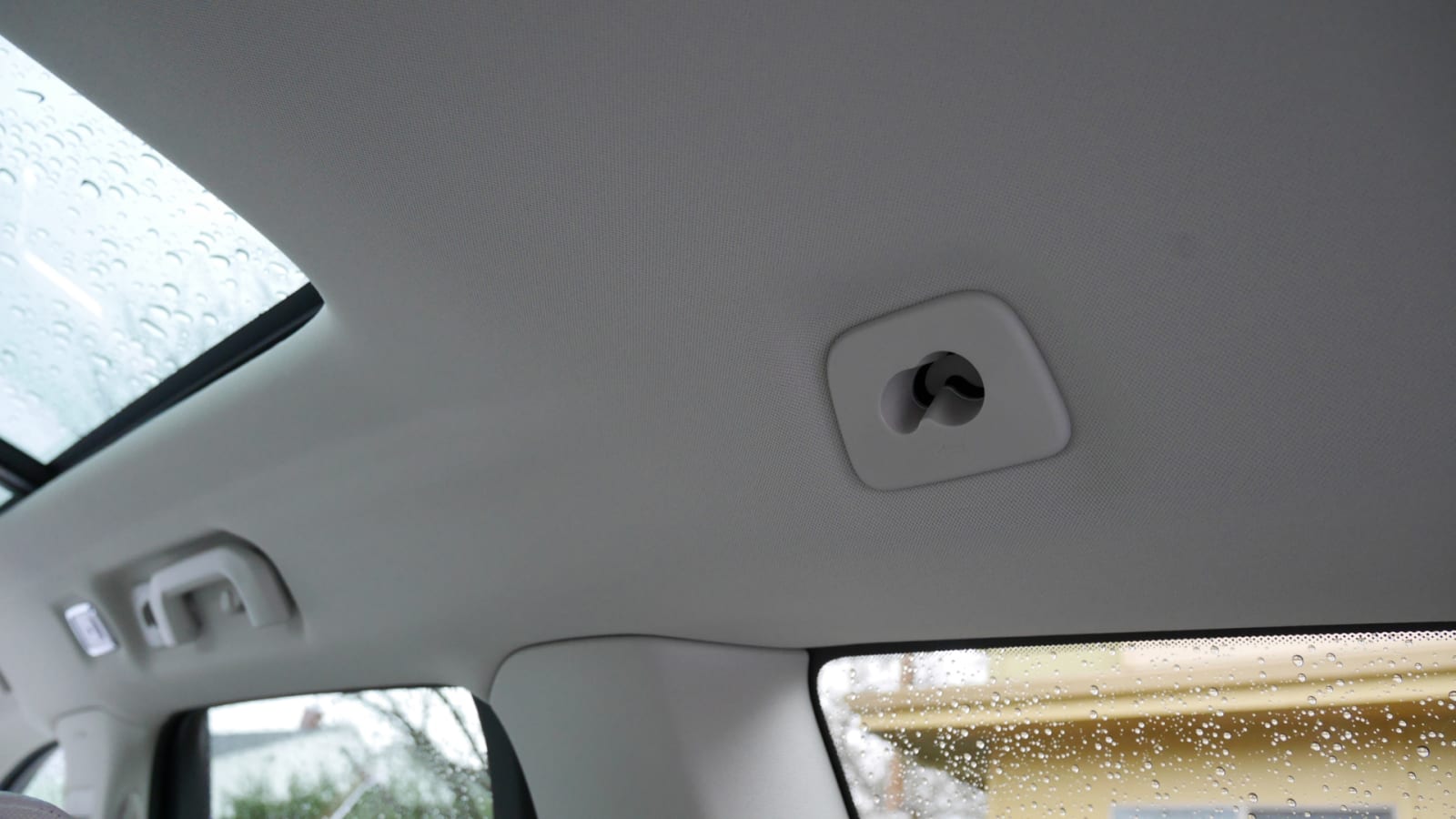 This allows you to secure and plug in a "Steel Protective Grille" to keep dogs secure, or when loading the cargo area to the roof with luggage. It prevents either from flying forward in the event of a sudden stop. However, that gate must be purchased separately and physically removed. 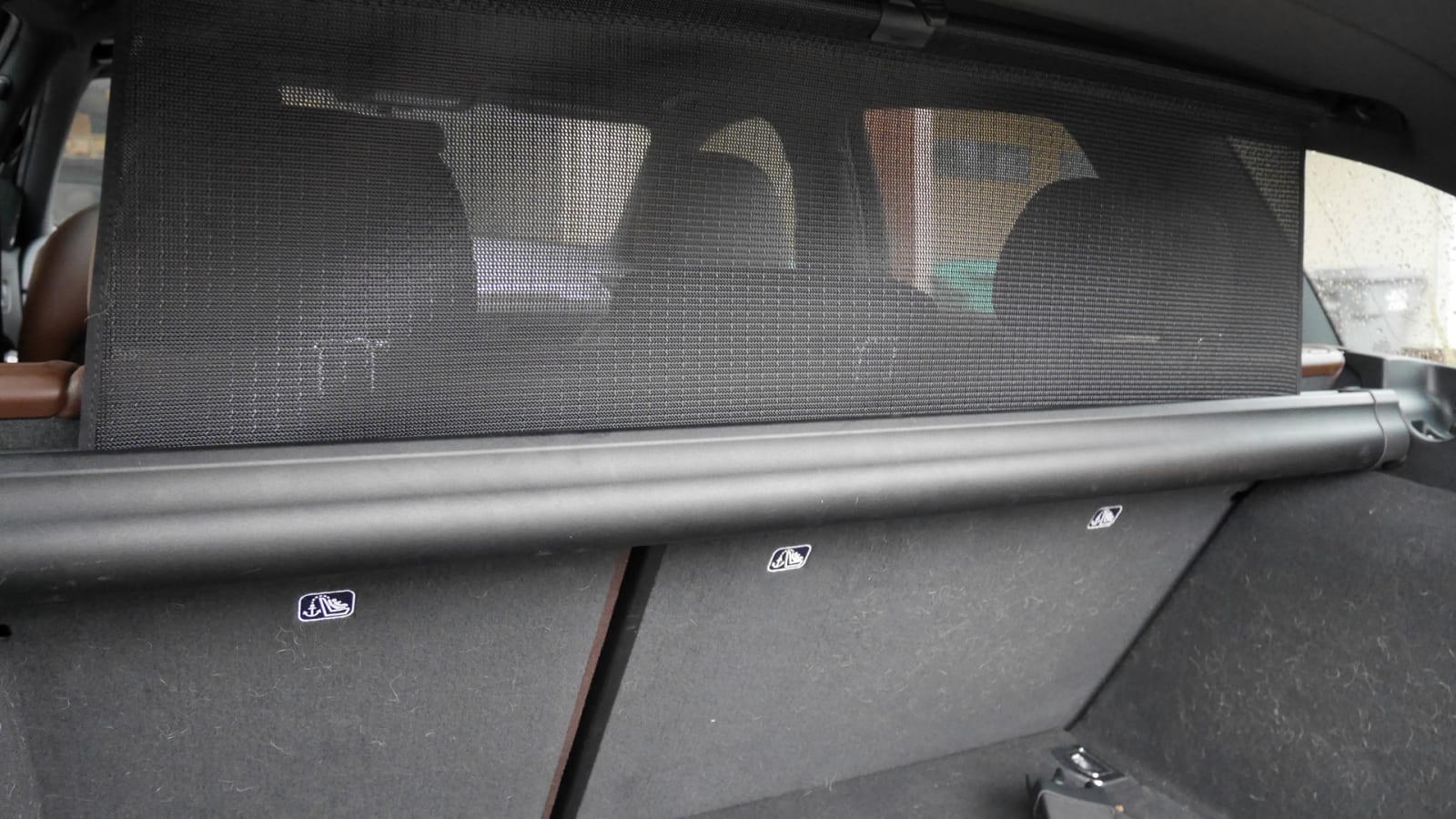 The Allroad, as well as some other wagons, came with a roll-out screen that extends from a second reel secured behind the cargo cover reel. It may not be as secure as the metal grate, but it also easily disappears when not needed. I can't tell you how useful a feature this is. We've used it when transporting dogs, but when I've needed to load a bag or two above the seat back line, it's done its job of preventing them from flying forward. It's a feature that I wish more SUVs came with. At least the V60 includes the plugs for the aftermarket gate unit.

So, does this wagon hold more than compact SUVs? Well, it can, but it's also hardly an Outback. 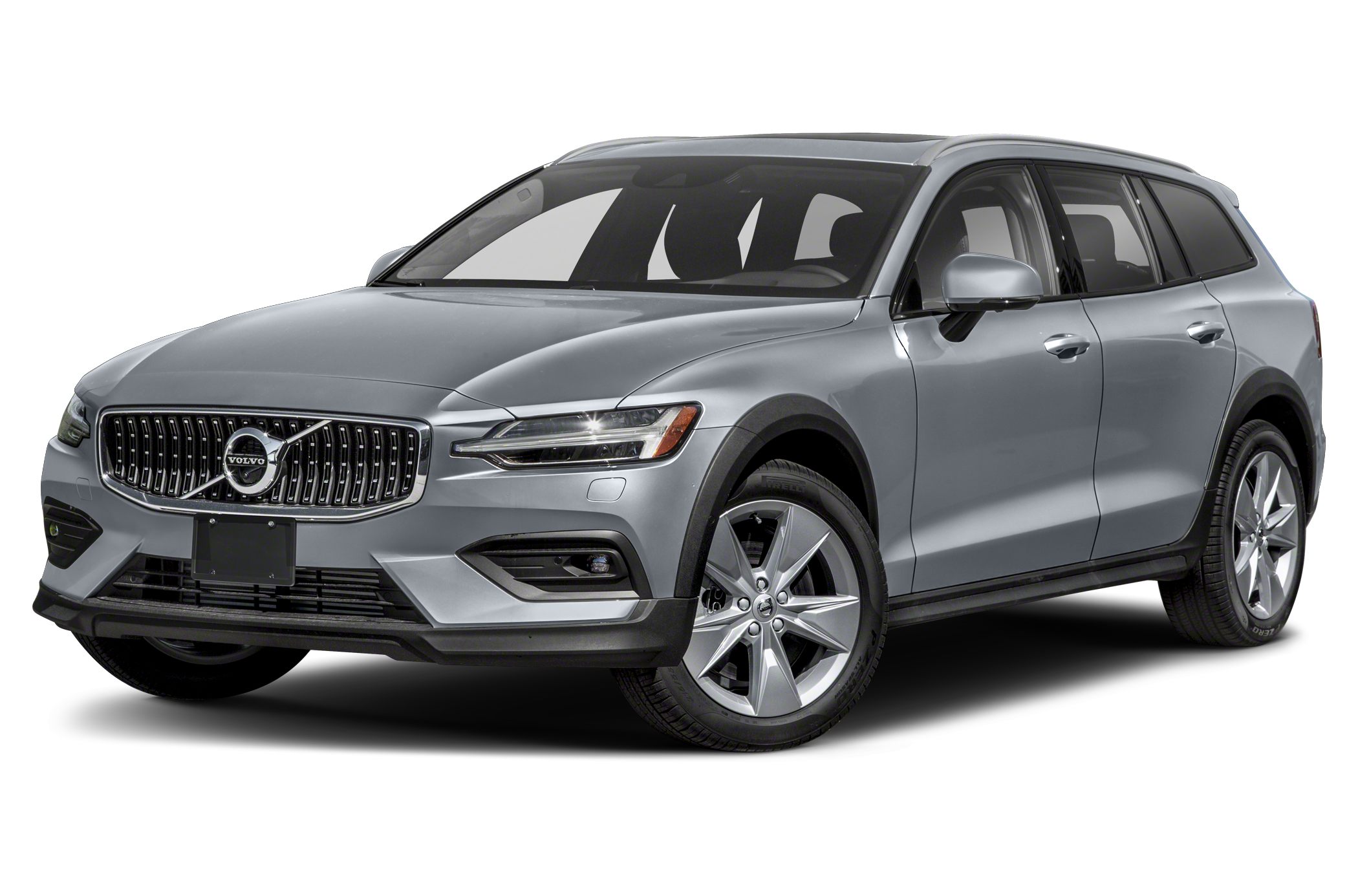 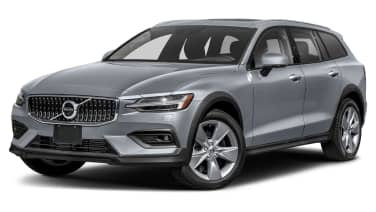