The just-right choice for enthusiasts, but it could still use a sharper edge

ESTORIL, Portugal – There’s a reason SUVs haven't caught on in Europe like they have in the U.S. The 2020 Porsche Macan GTS isn’t large by American standards, but in a small village nestled in the hills of western Portugal, it might as well be a Peterbilt. Squeezing the SUV through the town’s narrow maze of stone-walled medieval cart paths is proving difficult. And to make matters worse, we’re lost as the Porsche navigation system struggles to supply an escape route to the coast.

Porsche calls the new GTS the sportiest Macan, but in this environment, its 375 horsepower, lowered suspension and 21-inch wheels wrapped in summer tires aren’t doing us much good. Finally, after about an hour, just as the early morning fog burns off and the sun begins to dry the dew from the region's ancient tracks, we bust out and reach the Atlantic. The road opens with the vistas, and on the two-lane snaking past the surfers, beach cafes and gothic castles, it becomes immediately clear the Macan GTS can hustle.

Heavily revised inside and out for the 2019 model year, the compact Macan continues to be the brand’s best-selling model in America. After sitting out for a year, the Macan GTS (Gran Turismo Sport) makes its return for 2020 as the fourth version in the lineup, slotting between the 348-hp Macan S and the 434-hp Macan Turbo. Its $72,650 base price also splits the cost of the other two, and it’s about $3,000 more than the previous version cost in 2018.

That version of the GTS, first introduced in 2016, featured a 360-hp twin-turbo 3.0-liter twin-turbo V6, which has been scrapped. This new version is considerably stronger thanks to a detuned version of the 2.9-liter V6 used in the Macan Turbo. The engine also sees duty in the Cayenne S and Panamera 4S, and unlike the 3.0-liter, its turbos are mounted between its cylinder heads in the V of the engine block. The “hot V” design, which is also used by Mercedes and BMW, shortens the manifolds and increases response time. 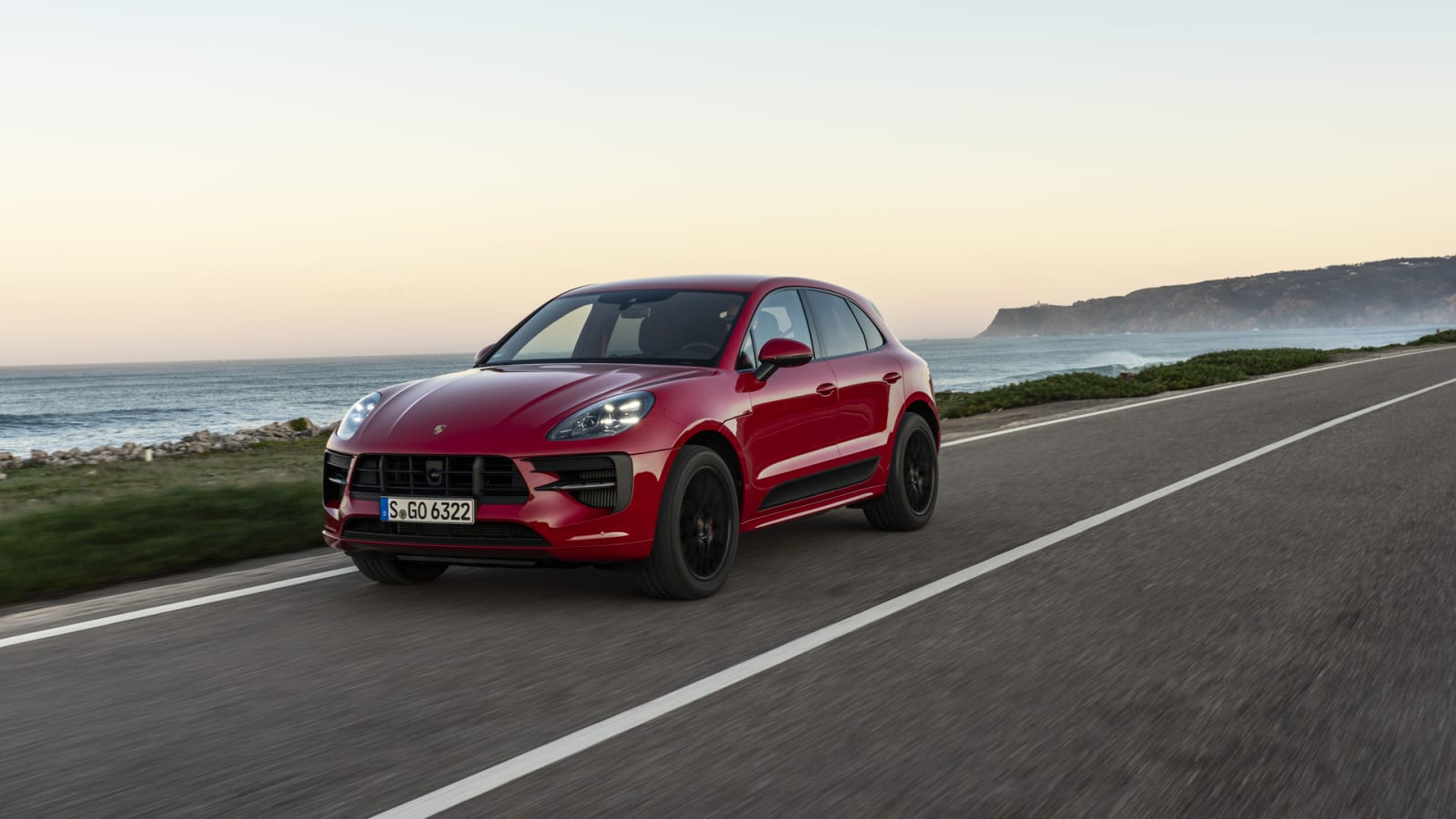 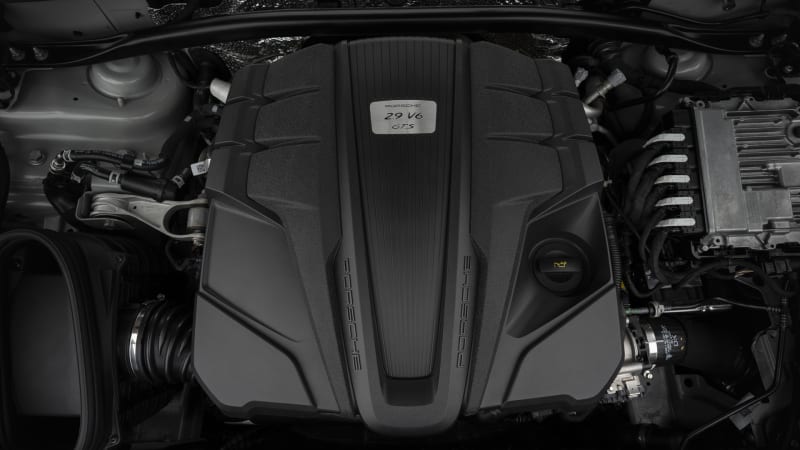 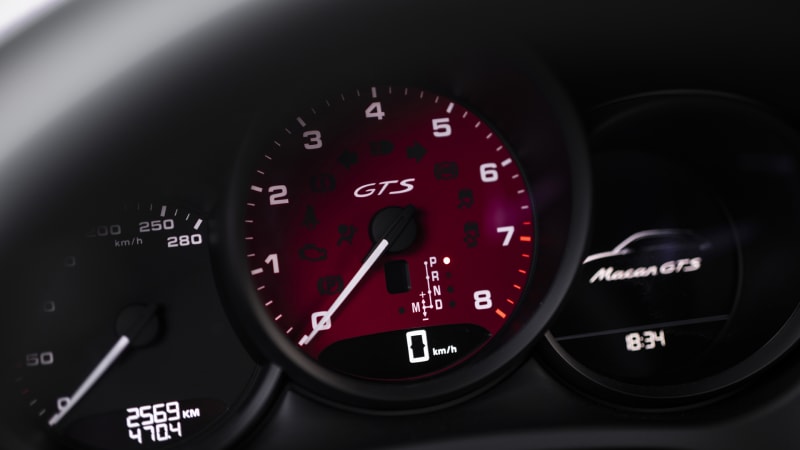 It feels considerably quicker than that, and it probably is. Porsche notoriously underestimates the thrust of its machines. Although it says the Macan S is a 4.9-second car to 60 mph, Car and Driver has run a 4.7, for instance. With its Launch Control unleashing the SUV at 5,000 rpm, and its all-wheel drive and big Michelins putting the power down cleanly, you’re literally pinned to the seat as the GTS squats hard on its rear suspension and its nose climbs for the sky. From behind the wheel, this feels like a 4.0- to 4.1-second car, while the Macan Turbo should be four-tenths quicker.

Unfortunately, despite all that might and the fact that the engine revs out to a 6,800 rpm redline, the 2.9-liter doesn’t sound or feel particularly special in the Macan GTS. Porsche says it’s a “super-emotional engine,” but it isn’t as visceral as we’d like in a GTS model, which is supposed to be for the hardcore enthusiast. It’s all a bit too refined, a notch too civilized for its own good.

Even the Turbo’s Sport Exhaust system, which is standard and has been retuned specifically for this application, fails to deliver the music. With the exception of an entertaining “brap” on the gear changes, it’s just too quiet and its note too nasal. That said, it's good that Porsche didn’t add any artificial pops and bangs on the overruns, which has become an annoying habit of Mercedes and Jaguar. 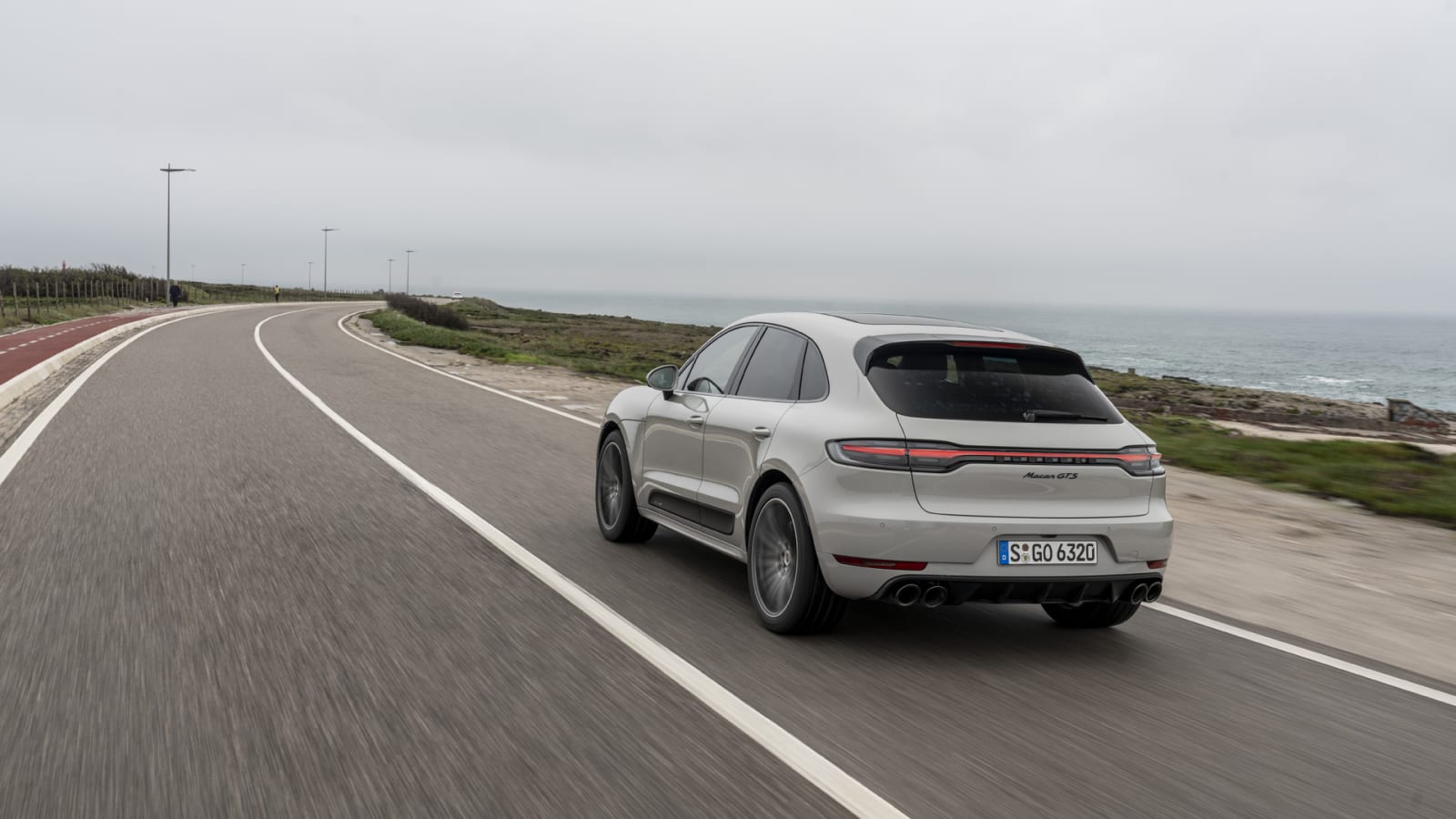 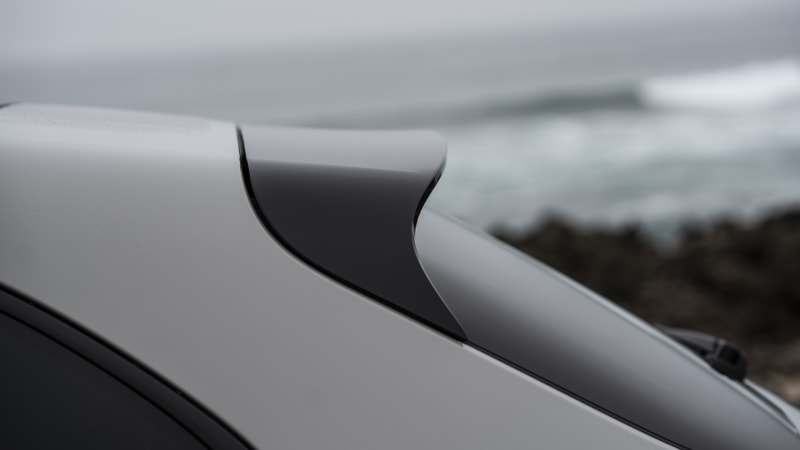 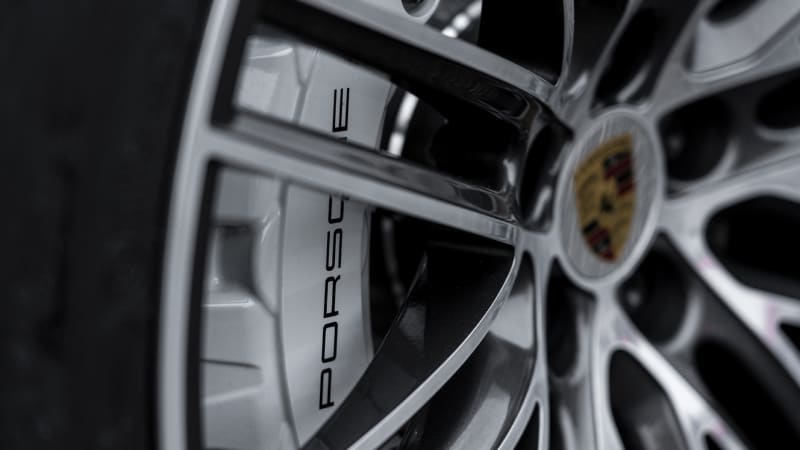 The performance is there. When driven hard, the SUV seems to shrink around you and it delivers the speed, response and feel that has made the Porsche Macan the driver’s choice in this class for six years. There’s still more steering feel than you get anywhere else and Porsche’s seven-speed PDK dual-clutch automatic continues to set the standard, snapping off sharp but smooth gear changes and always at the right time.

Considering this is a GTS model, the transmission's behavior could have been dialed up even further, however. Around town in Comfort mode, it upshifts too quickly through the gears at part throttle. With all that engine torque, it can make the Macan feel a bit lazy. And when you combine Sport Plus mode with the transmission’s manual mode, it should let you hold a gear and touch the rev limiter, but it doesn’t, instead it upshifting for you at redline. Again, this is fine in the other Macan models, but disappointing in a GTS.

Porsche’s chassis tuning also remains a few steps ahead of the competition, and the Macan continues to defy its front-wheel-drive roots. Remember its chassis dates back to 2015 and was shared with the first-generation Audi Q5, yet it never seems nose heavy despite 53 percent of its weight being up front. According to Torsten Gaertner, the senior engineer of vehicle dynamics on the Macan, that agility is a result of a combination of steering angle, the tuning of the damping system and the tires.

Air suspension including Porsche Active Suspension Management (PASM) is standard on the Macan GTS. It’s all the same hardware you get in the Macan Turbo, but the spring rates have been dialed up 15% and it sits an inch lower than the Turbo and every other Macan. The anti-roll bars are thicker, 5% in the front and 11% in the rear. They’re the same bars used on the previous-generation GTS and as before there’s very little body roll. There also isn’t a bunch of head toss like you get in some M-tuned BMWs, which Gaertner contributes to the damping control.

Still, Porsche could have been even more aggressive when tuning the suspension. A few times during our drive, looking to tighten the response of the Macan’s transmission and suspension damping, I reached down to the knob on the steering wheel to select Sport mode, only to find it was already in Sport Plus. 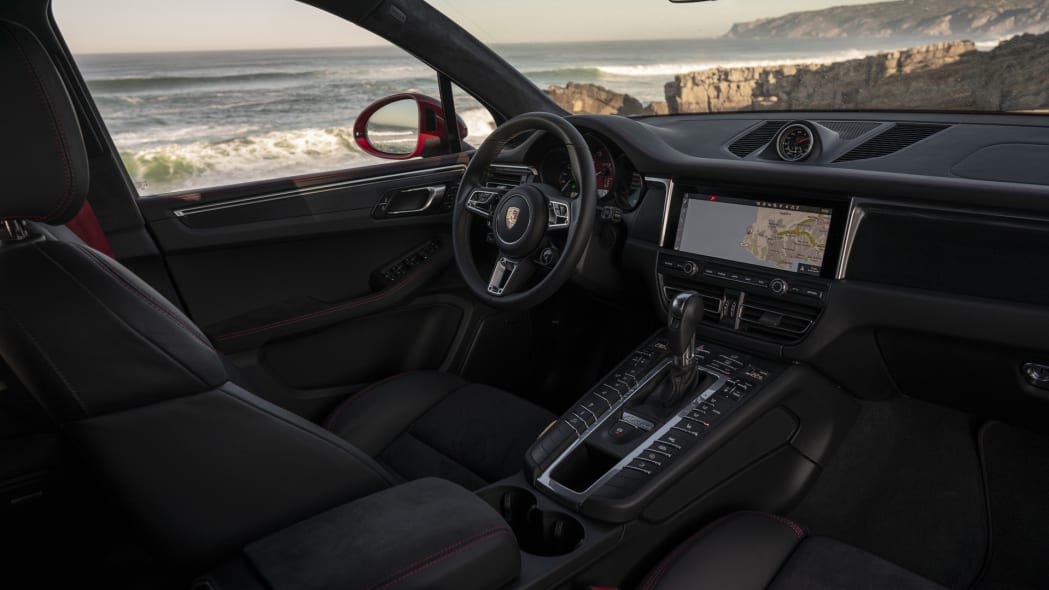 Six wheel designs are offered including two in body color if you’re feeling nostalgic for the 1980s. Black GTS-specific 20-inch RS Spyder wheels are standard, but the ride remained impressively compliant on the optional 21s, even over cobblestones. Our test car rode on Michelin Latitude Sport 3 tires measuring 295/35R21 rear and 265/40R21 front.

Then there are our test car's optional Porsche Ceramic Composite Brake (PCCB), which could stop an Airbus 380 on a short runway. They’re even larger at 15.6 inches up front and 14.6 inches out back, but considerably lighter. They feature yellow calipers and cost over $8,000. Porsche Torque Vectoring Plus system, which improves cornering with a variable rear differential and the application of the rear brakes.

Exterior identifiers for the Macan GTS are its extensive black trim, including its badging, rear spoiler, rear diffuser and tailpipes, and tinted LED headlamps and taillights. Porsche also adds a subtle black GTS script on its sideblades. The interior gets a smattering of Alcantara, brushed black aluminum trim and more heavily bolstered sport seats, which proved comfortable during our three-hour drive along the Portuguese coast. Contrasting Carmine Red or Chalk stitching with matching seat belts, a red-faced tachometer and carbon fiber trim are available.

Some may choose to think of the Macan GTS as a Macan S with more muscle. Most of its bits are available on the Macan S, including its air suspension, but it would cost you about $5,000 more once you stack up all the options. And you’d still be down 27 hp and 29 lb-ft of torque.

No, it’s better to think of the GTS as a Macan Turbo with 59 less horsepower and a $12,300 discount, which averages out to $208.40 cents per pony. The Turbo may still be quicker and it'll lap the Nurburgring faster, but the new Macan GTS is the better value. And its chassis is more responsive. Porsche will gladly take your order now. Deliveries begin in the summer.

Just don’t try to squeeze it through any medieval Portuguese villages.

$1,252 - $2,821 Nat'l avg. savings off MSRP
See Local Pricing
I'm not in the market for a vehicle at this time. Please move this suggestion to the side for 30 days.
Huge Savings