As close to a convertible Raptor as you can get CHICAGO — The traditional top of the Wrangler and Gladiator range is the Rubicon, a truck focused on crawling over rocks and tight dirt trails. Now the Rubicon has a faster-moving, desert-oriented twin, the 2020 Jeep Gladiator Mojave.

The trim level is exclusive to the Gladiator, at least for the time being, as it was designed from the get-go of the truck's development. It's not just a name and graphics, either. Leading the mechanical upgrades are Fox remote-reservoir shocks at all four corners, which Jeep says can provide good ride quality and low risk of shock overheating off road. Not only that, but they are a bit stiffer than on other Gladiators, so Jeep representatives said it should have sportier on-road feel.

These off-road shocks are accompanied by a reinforced chassis, more so than the Rubicon, plus a 1-inch lift at the front and hydraulic jounce shocks. All of this makes the Mojave more capable of handling high-speed bumps and occasional rough landings. Off-road tires are also a part of the Mojave's chassis upgrades including 33-inch all-terrain tires as standard, with mud-terrains available as an option. All of these upgrades also give the Mojave the best approach angle and departure angle of any Gladiator at 44.7 and 20.9 degrees respectively, though the departure angle is slightly worse than the Rubicon's at 25.5 degrees — the unfortunate pitfall of off-roading while dragging a pickup bed behind you. 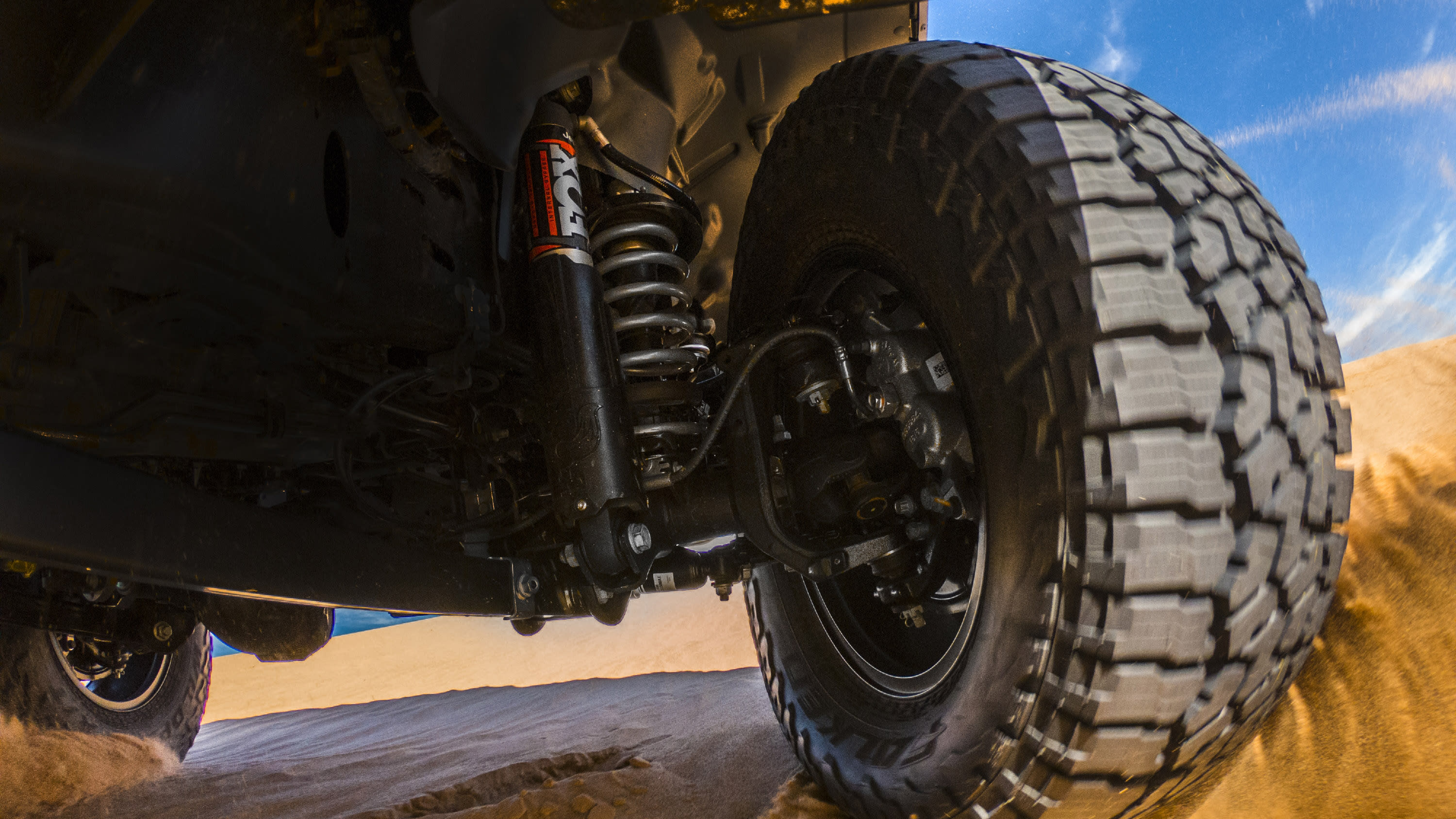 On the drivetrain front, the changes are less dramatic. The engine is the same 3.6-liter V6 with 285 horsepower and 260 pound-feet of torque and it can be paired with either a six-speed manual or eight-speed automatic. Unlike the Rubicon's 4.0:1 low-range transfer case ratio, the Mojave gets a transfer case with a 2.72:1 ratio. This is so that you can go faster in low range, with a top speed of around 50 mph, as opposed to 30 mph with the Rubicon. In addition, the Mojave's Off-road Plus mode allows the driver to engage the standard locking rear differential in four-wheel drive high, not just in low-range. This is to enhance traction at high speeds off road. Payload capacity is the same as the Rubicon at 1,200 pounds maximum, and towing has a maximum of 6,000 pounds, a bit lower than the Rubicon's maximum of 7,000 pounds.

The Mojave does still get visual upgrades to distinguish it from its brethren. The main change is the exclusive hood with a big hood scoop. It's blocked off from the factory, though Jeep representatives said you could open it up if you want. Skid plates and rocker guards protect the underside of the truck. Stickers proclaim the truck's name on the hood, and a new "Desert Rated" badge is fitted to the fenders. This badge denotes a vehicle that meets the company's special criteria for fast desert driving, including a test on a new desert section of Jeep's proving grounds, just as "Trail Rated" only applies to vehicles that meet the criteria for low-speed off-road driving. Furthermore, there are orange tow hooks and a black or gray interior with orange accents. Cloth or leather are available for the seat upholstery.

The Gladiator Mojave goes on sale in the second quarter of this year. Pricing hasn't been announced yet, but will be revealed closer to the on-sale date. Jeep representatives did say pricing should be similar to a Gladiator Rubicon, which starts at about $45,000 with destination.