World champion Ott Tanak retired from the Monte Carlo Rally after rolling his Hyundai spectacularly at speed on Friday and being taken to hospital for precautionary checks.

Hyundai said in a statement that the Estonian and co-driver Martin Jarveoja, who were able to exit the car unassisted after the accident in the French Alps 9.2km into the 20.68km fourth stage, were fine.

"The Estonians will be kept in hospital overnight for precautionary monitoring and will take no further part in Rallye Monte-Carlo," the team added.

Camera footage showed the Hyundai careering off the road and barrel-rolling into trees before coming to rest more than 100m down the hillside.

Tanak won the championship with Toyota last season and the season-opening Monte Carlo rally is his competitive debut with Hyundai, the reigning manufacturers' champions.

The Estonian had been third overall after Thursday's opening night stages. 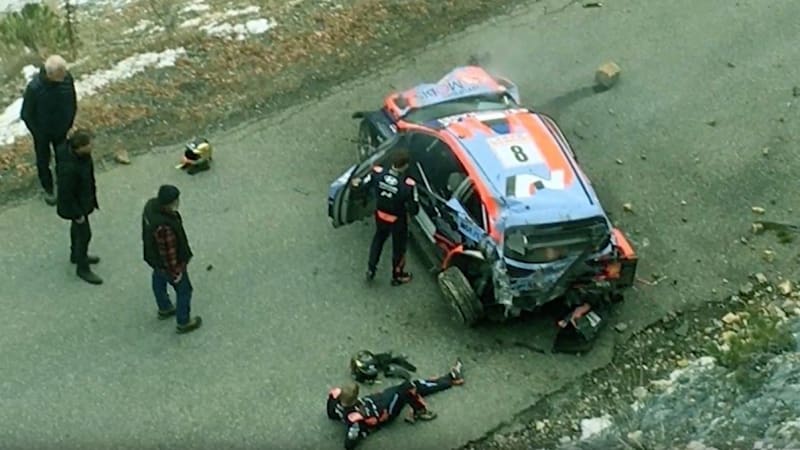 "I am pleased that Ott and Martin are fine after their accident in this morning’s loop," said team principal Andrea Adamo. "Our priority in such situations is always the condition of the crew first and foremost.

"It is customary after such incidents for hospital check-ups, the results of which were clear."

Tanak's Belgian team mate Thierry Neuville had led the rally overnight but Toyota debutant Elfyn Evans took over at the top on Friday.

The Welshman was fastest in the three morning stages to lead Neuville by 8.9 seconds.

"The feeling is generally pretty good in the car and the right tyre choice was made as well, so thanks to the team for that. It’s been great so far," Evans told the official wrc.com website.

"I’m still learning the car and have to find the limit when it’s bumpy," said the six-times world champion, who left Citroen at the end of last season.