It comes with the full-size clay model and fiberglass mold. Tooling sold separately.

It was the last project built by Italian coachbuilder Bertone before it went bust, a one-off project designed and commissioned by the man who drove a 1954 Aston Martin DB2/4 around the world in 80 days, and now's your chance to buy it alongside the full-size clay model and fiberglass mold that preceded it.

We’re talking about the Aston Martin Bertone Jet 2+2, a wagonized Rapide that we last saw at the Geneva Motor Show back in 2013. It was built in homage both to Aston’s centenary and to mark six decades of cooperation between the automaker and the Italian design house. At the time, the identity of the client who commissioned it was kept secret.

It’s being offered for sale by Barry Weir, the British motoring enthusiast famous for his four-continent, 22-country, 34,000-mile world rally record, set in 2000. He designed the shooting brake based on the Rapide saloon, added a rear hatch, full-length tinted glass roof and sliding rear floor, and got it approved by Aston, which reportedly intended to put the car into production after Bertone built 10 of them. But that never happened, as Bertone folded operations after this project. Nevertheless, Weir says he found the fiberglass molds and clay model used to build the car earlier this year on auction in Italy while browsing the web. He managed to negotiate their removal from the auction and bring them back to the U.K., and he’s even offering to sell the tooling set separately. “I’m minded to sell the complete package, and the buyer can choose what they wish to do with it,” Weir says. “They could reproduce the moulds and model or, alternatively, have it as a one-off production car which is registered as Aston Martin Jet 2; which is a new model.”

The finished product is said to share 70% of its DNA with the Rapide, including the stock 6.0-liter V12, offering 476 horsepower, and the same wheelbase and a nearly identical curb weight to the donor car. Inside, it features a 2+2 setup with four individual seats, the two in back foldable at the press of a button to make for hauling stuff, and Bertone gave the interior some wood, glazed aluminum and two-color leather trim, per request of Weir, whose name is etched on a plaque inside the cabin. The total design and build took around 3½ months. 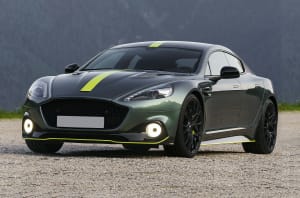