Clash of the off-road titans

For several years, the Ram 2500 Power Wagon has been the unquestioned king of heavy duty off-roaders. But competition is coming, and some of the strongest is from the 2020 Ford Super Duty Tremor. We decided to take a look at these trucks' specs and features to see how they compare in the realm of capability. The raw numbers are below along with some notes on each truck's unique features that go beyond the spec sheet.

While both of these trucks boast impressive clambering abilities, each with particular strengths. The Super Duty Tremor earns points for better ground clearance and axle clearance, as well as approach angle. Some of the credit goes to the larger 35-inch tires and a shortened front air dam. On the other hand, the Power Wagon leads the Ford in departure angle, and in the ramp travel index. The latter is largely the result of the Power Wagon's electronically disconnecting sway bars, and for those unfamiliar, the ramp travel index measures articulation by having a truck drive one wheel up a ramp with the other on the ground. The farther the truck goes with the ground wheel in contact with the, well, ground, the better the score and the better the articulation.

Numbers aren't everything, though. It's important to look at the equipment each truck offers, and things are closer, here, but the Ram still has an edge. Both feature off-road-friendly solid axles at both ends, but only the Power Wagon has fully locking differentials front and rear. The Tremor has a locking rear differential while the front is a limited-slip differential. The Power Wagon comes standard with a 12,000-pound integrated Warn winch, whereas such a winch is an option on the Tremor. The Tremor has its own unique features, though, including the 35-inch tires rather than the Ram's 33-inchers, and it has Ford's fancy off-road cruise control function called Trail Control. Both trucks have shocks and springs tuned for off-road use. 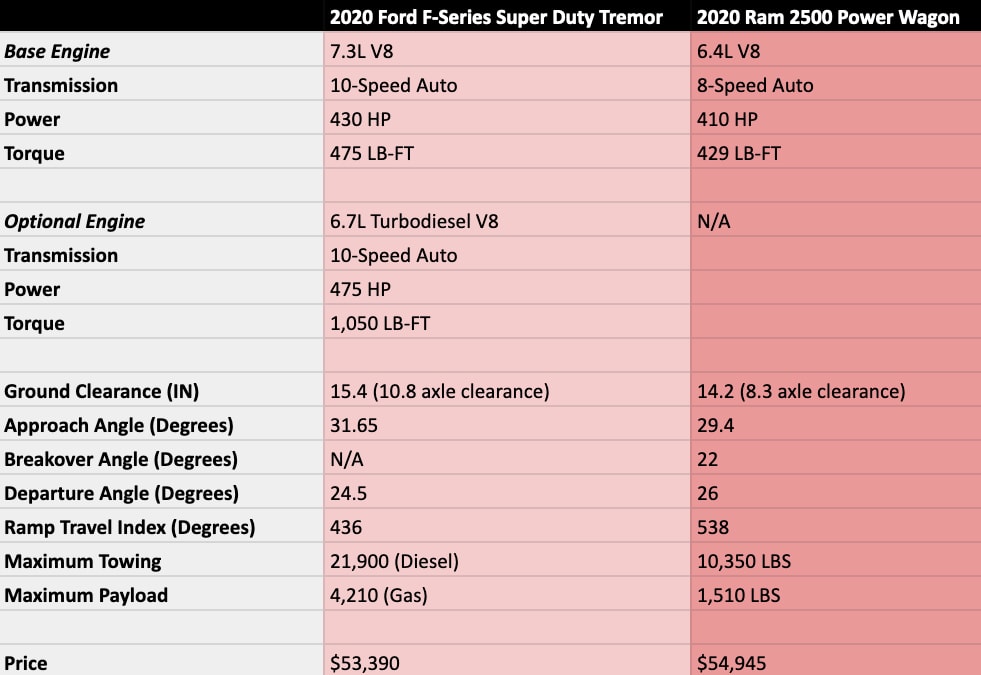 While the Power Wagon has an edge in off-roading, the Tremor makes up for it with general truck capability. Unlike the Ram, the Super Duty has two engine options, either a huge 7.3-liter gas-powered V8, or a 6.7-liter diesel V8. The Ram's only option is a gas 6.4-liter V8 since the bigger, heavier diesel doesn't fit with the winch and doesn't play nicely with the Power Wagon's suspension. The Tremor doesn't have any space issues with the winch, so it can be had with both engines. Both Ford engines make more power and torque than the Ram's single gas engine, too.

Towing and payload capacity is massively higher for the Ford, too. Part of that is because you can get the Tremor applied to the F-350 as well as the F-250, whereas the Power Wagon is 2500 only. Still, the F-250 also bests the Power Wagon's payload and towing capacities by thousands of pounds. It's not even close. The base price of each of these all-terrain trucks is extremely close at a bit over $50,000, but the Ford is cheaper by just $1,555. Besides pricing, the Ford offers more variety when it comes to trims and features. The Power Wagon is its own trim only available on the 2500 and exclusively tied to one engine. The Tremor is an option package that can be added to the XLT, Lariat, King Ranch and Platinum trims; it's available on both the F-250 and the heavier duty F-350; and can be equipped with either the big gas or diesel engine. As a result, there's greater variety, but you can also make it much more expensive. If your main goal is off-roading, both of these trucks are very strong choices, but we give the edge to the Ram. While the Ford has a clearance advantage, it should be easy for a Ram owner to close that gap with a set of bigger tires. When it comes to traditional truck measures of power, torque, towing and hauling, however, the Ford is superior. And of course if you want both off-roading capability and those classic truck capabilities, the Ford delivers on the whole package. 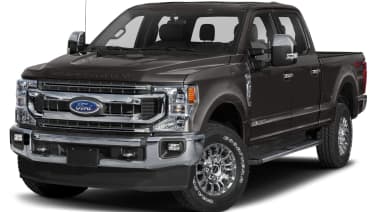 $253 - $1,950 Nat'l avg. savings off MSRP
See Local Pricing
I'm not in the market for a vehicle at this time. Please move this suggestion to the side for 30 days.
Huge Savings