It's the crossover coupe version of the QX50

The Infiniti QX55 is well on its way to joining the crossover coupe ranks in 2020, and here’s our first view of the car out testing. Infiniti is expected to debut the ‘ute in the first half of 2020, so it won’t be long till we see it without the swirls and body cladding on it, too.

As the name suggests, the QX55 is a derivative of the QX50 crossover, which was just completely redesigned for the 2019 model year. Infiniti debuted its new VC-Turbo (variable compression) engine technology in that crossover, and it’ll certainly be along for the ride in the QX55 as well. The latest teaser suggested that Infiniti would be greatly differentiating this crossover coupe to the rest of the field by giving it a uniquely long tail for more cargo space. That tail still exists on the vehicle caught out testing, but it doesn’t look drastically different than other vehicles of its ilk. To that end, rear cargo space is likely to be slightly down from the more traditionally shaped QX50, even if it’s slightly better than competitors.

However, rear seat space appears to be better than expected. The roof itself doesn’t taper at a horribly steep angle into the rear passenger’s heads, and the rear windows are large enough that they may only cause minor claustrophobia. Most of everything except for the rear end will likely resemble the QX50 verbatim, so it’s just the back half that we’re waiting for in the reveal. The grille itself has the same waveform shape as the normal QX50, and the body creases in the hood and doors protruding through the skin-tight camo resemble it as well. Even the wheels on this tester are exactly the same design as the rollers used on the production QX50.

When it does come out, the QX55 will join its German competition in this stylish but utility-hampered segment. The BMW X4 and Mercedes-Benz GLC Coupe will be the main targets when we expect this car to hit dealer lots later this year. 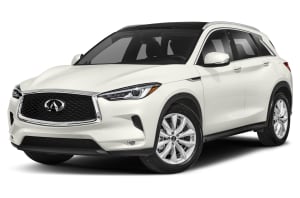