This show car build clearly lost something in translation 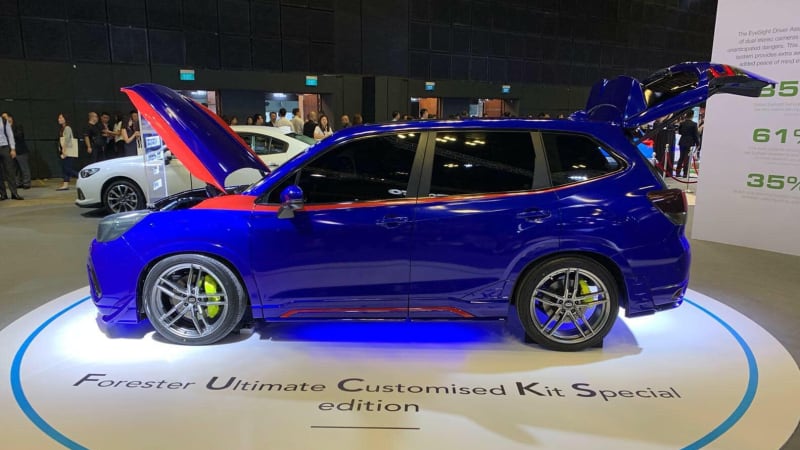 UPDATE: Subaru of America reportedly found it necessary to disavow itself from the Forester Ultimate Customised Kit Special edition that was displayed at this year's Singapore Motor Show. According to The Drive, the automaker sent a letter to its American dealership network to explain that it "had nothing to do with this" and that "it obviously goes without saying that this car will not be available in the United States market."

Subaru likely brought several serious concepts to this year's Singapore Motor Show. We sincerely hope that this is not one of them.

Meet the Forester Ultimate Customised Kit Special edition (little "e"). If you're old enough to be on the Internet, you certainly know exactly where this is going, and it's not anywhere appropriate.

In this lighting, it's hard to tell, but the F***S edition appears to be finished in Subaru's World Rally Blue, and the pin-striping is very likely STI's signature cherry blossom pink, but we frankly cannot tear our eyes away from the podium, which is emblazoned with the custom Forester's name.

As Top Gear Philippines points out, it's otherwise a fairly generic show car. From the body kit that gives it a low-slung attitude to the custom paint work, nothing about the F***S edition appears out of the ordinary. It's even rocking a set of 20-inch Enkei wheels over yellow brake calipers.

We're not sure what exactly is going on under the hood, but we wouldn't be surprised to find the normal host of bolt-on factory and aftermarket power-adders, or maybe even a full-blown STI powertrain just for extra cred.

Inside, it has yet more of the trappings of a run-of-the-mill SEMA build. A huge touchscreen up front controls a custom audio system backed up by Focal amplifiers and a subwoofer. There's custom blue ambient lighting in the front cabin and a set of tablet-style monitors for rear passenger entertainment.

The execution leads us to believe that either its builders had no clue, or they simply gave no... well... you know.

$1,638 - $2,393 Nat'l avg. savings off MSRP
See Local Pricing
I'm not in the market for a vehicle at this time. Please move this suggestion to the side for 30 days.
Huge Savings