Lamborghini Urus ST-X due out in 2020, hybrid with boost mode still on the way

Lamborghini wants to stand out from its sister brands LAS VEGAS — Lamborghini will expand the Urus range by taking it in two completely different directions. The SUV will go racing by the end of 2020, and it will gain a gasoline-electric hybrid powertrain. Autoblog sat down with Maurizio Reggiani, the head of the Italian firm's research and development department, at CES to get the latest on both projects.

An updated variant of the track-bound Urus ST-X concept (pictured) made its debut in 2019. Development work is ongoing in the automaker's Squadra Corsa department, Reggiani told us, and the model is scheduled to appear during the 2020 Lamborghini Super Trofeo World Final taking place in Misano, Italy, Oct. 31 to Nov. 1. "There will be a demo race where we'll present the format," Reggiani said.

Meanwhile, another team is busily developing the plug-in hybrid variant of the Urus. It's a relatively straightforward process, because the model's platform was designed with electrification in mind, and the other models built on it (including the Porsche Cayenne and the Bentley Bentayga) are already available with hybrid power. The trick is figuring out what Lamborghini can bring to the table to differentiate itself from its sister brands.

"The most important part will be to define in what way a Lamborghini must use this electric energy, and in what way we can be different from the other users of this platform," Reggiani said. While he stopped short of revealing what his team has decided, and he didn't share the model's unveiling date, he told us the driving mode selected will have a big effect on how the plug-in hybrid system dispenses electricity.

"We have seven different driving modes in the Urus, and what will be important is that every driving mode use electric power in a different way." Pressed for details, he singled out a "boost-oriented mode" created for maximum performance and an efficiency-focused mode that puts fuel economy front and center.

Lamborghini is also taking its supercars into hybrid territory. We already know the Aventador's successor will offer a gasoline-electric powertrain, but the system won't be related to the one fitted to the Urus. Making a hybrid supercar is far more challenging than putting the system in an SUV, due to weight and packaging constraints, and going entirely electric would be even more difficult. Reggiani asserts the technology isn't ready yet.

"When you drive a super-sport car, you want to have the freedom to do what you want. Freedom can mean going on the track for a day, and running the car lap after lap. Today, it's clear the battery technology isn't able to provide this." British rival McLaren came to the same conclusion, though Porsche begs to differ and touts the Taycan's endurance. 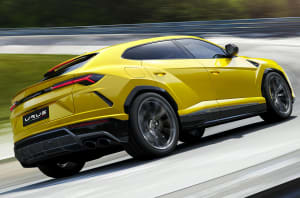