In 2007, the Mini Convertible Sidewalk dropped its top in bitter winter during the Detroit Auto Show to show off its exclusive appearance package. The cosmetic suite makes a return for 2020, again as the Mini Convertible Sidewalk, with more color and design choices courtesy of Mini Yours. The primo choice comes in Deep Laguna metallic, a hue unavailable on other models, set off by patterned hood strips with contrasting edges. Buyers can spec five metallic colors from the traditional palette, too: White Silver, Moonwalk Grey, Thunder Grey, Enigmatic Black, and Midnight Black. For markets that make such perks optional, the Sidewalk Chili equipment package installs LED headlights and fog lights, automatic air conditioning, the interior lighting package, a height-adjustable front passenger seat, the storage package, and driving modes.

Sidewalk logos on the side indicator bezels ease identification from afar, so too the 17 inch Scissor Spoke two-tone wheels. Upon closer inspection, the arrow graphics woven into the fabric soft top are another giveaway, as are the brushed aluminum sill plates bearing the word "Sidewalk."

The interior's been wrapped in MINI Yours anthracite leather upholstery, stitched with Petrol and Energetic Yellow thread. Braided Petrol piping outlines the seat forms, dark Petrol contours the floor mats, while doors get Petrol and silver accents. A Sidewalk logo sits at the base of the leather-wrapped sports steering wheel.

Three engine lineup comes in three gasoline flavors, a 1.5-liter three-cylinder with 102-horsepower in the Mini One, the same engine with 134 hp in the Mini Cooper, and a 192-hp, 2.0-liter four-cylinder for the Mini Cooper S. Mini says the standard transmission will be a six-speed manual; the row-your-own took a break for a spell but is due back in the U.S. next month. The seven-speed Steptronic dual-clutch is optional on the Mini Cooper and Cooper S, the DCT with paddle shifters an option on the Cooper S only.

We aren't privy to price yet – that comes closer to launch in March. The Mini Convertible Sidewalk will be sold worldwide, but numbers might be limited; the UK, for instance, only gets 150 examples. 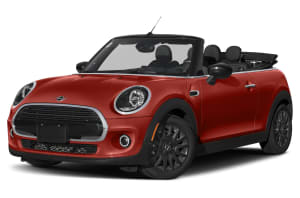